Take me in your village

The project realizes in practice the concept that “culture takes on different forms, responding to dynamic models of relationship between societies and territories”. In the local regional cultures are incarnated the informal knowledge, traditions and expressivity of the residents of this territory, created during their daily lives. The villages of the region are barely populated (5 800 residents), exclusively with elderly people and very few young people visit them occasionally.

The consistent trend of aging population, depopulation of villages and permanent lack of young people jeopardises the cultural heritage of the region, the traditional cultural achievements, accumulated in the natural environment of the rural atmosphere, which express shared communal perception of life and world, based on individual creativity. The richness, depth and diversity of this regional cultural heritage are completely unknown to the young generation, which lives entirely in urban settings and communicates predominantly via social media. Without purposeful efforts for affirmation of culture and traditions, these valuable foundations of the identity of the local people, cherished and preserved for centuries are nowadays endangered to sink into oblivion.

Gabrovo Municipality applies the principles and ideas of Agenda 21 for culture through a coordinated variety of cultural activities. The Municipality developed Strategy for culture 2014-2024; accepted and realizes Programme “Culture”, applied for European capital of culture in 2014, became a pilot city under the Programme “Pilot cities” in 2014 and a member of the creative cities network UNESCO in 2017. The initiative “Take me in your village” with its goal to preserve and transmit the authentic traditional cultural heritage of the region falls entirely within the scope of the consistently applied policies.

The idea for the project “Take me in your village” belongs to a young girl from Gabrovo, who offered a model by which the existing problem of losing the authentic rural traditions and cultures could be tackled. The idea was first realized in 2013 and has been annually repeated since, expanded each time.

The villages of the Gabrovo region are increasingly depopulated and the few permanent residents live in partial isolation, untouched by the achievements of the technological world. On the other hand, people there are holders of invaluable long-lasted authentic traditions, skills and knowledge, related to their daily life activities, customs, traditions, regional cultures, crafts, rituals, dances, songs etc., that have been passed from generation to generation and which nowadays are endangered of being completely lost and forgotten by the younger generations.

The young people live entirely in urban settings, where the relation with the traditional culture is unattained. This diversion from the cultural heritage, the enclosure in one’s home and the communication exclusively via social media entail profound negative consequences:

The project aims through provision of access to culture, the young people to be influenced and their identity to be moulded towards understanding and cherishing the cultural achievements of their own people and active inclusion in preserving and developing them, thus expressing themselves in relation with the others. The process of sharing cultures between generations and nations creates interest to the cultural aspirations of the others and respect to their achievements, active co-existence and contribution to the interculturality of the global world.

The municipality developed a strategy for culture 2014-2024; accepted and realizes the programme "Culture", applied for European Capital for Culture in 2014, became a Pilot City under the programme "Pilot Cities" in 2014 and a member of the Creative Cities Network UNESCO in 2017.

The project participants are two main groups: children and young people (“grandchildren to lend”) and elderly people (“grandparents to rent”). They include: children (9 - 14 years) and young people
(15 - 29 years) from the country, from Bulgarian communities and from Gabrovo twin cities and elderly residents of the villages. The project has its impact upon the general community of Gabrovo region, who are its indirect beneficiaries.

The project started in 1 village with 12 participants. The initiative enlarged and developed - the number of the villages and participants is increased A network of villages is established. Participants of various ages are involved. Different organizational variants are provided for the participants - youth groups, junior groups, daily groups, youth exchanges, etc. Initially the participants were from Gabrovo municipality and later from Bulgaria, Belgium, Russia, Spain, Germany, Great Britain, etc.

Valuable partners of Gabrovo Municipality are the community centers in the villages, where the local traditions, folklore, customs and cultures are kept. They introduce the “grandchildren to lend” with the folklore songs, dances, customs and traditions. Bulgarian citizens, who permanently live abroad, are genuinely interested in the initiative and support its realization, promoting it in the local communities.

Started as a single initiative with a dozen of participants, this initiative turned into an annual event sought after by children and young people from the region, country and abroad, organized and promoted by the local government.

The local government provided initial and following support for the realization of the idea, for its sustainability and continuity. It discerned the project’ potential for intervening upon some identified development challenges - jeopardised regional cultures; alienation of the young from the regional culture, that could lead to loosing of idiosyncrasies and blurring of identities; generation gap, leading to life in isolation, inability to communicate, depressions etc. The local government was convinced by a practical example that alternative, new ways, ideas and approaches are full of potential and should be supported and that the existing situation should be given a new perspective.

The realization of this project contributed considerably to the process of exploring and developing the local cultures. Through direct participation and involvement, the personal expressiveness and creativity of the young were provoked and incited under the guidance of the elderly, through their experiences and knowing. Being the main “cultural actors”, both main target groups were influenced by the project realization, benefitting by the provided opportunity to create, invent and discover, to experience and share the abundance of the rural life and the richness of cultural layers, hidden in the secrecy of this, endangered to lapse into oblivion, world.

The elderly meets the young and benefit from the interacting: directly, being assisted in the daily life chores and indirectly, understanding the unknown world of this generation and learning to communicate with technologies.

Through direct participation and involvement, the personal expressiveness and creativity of the young were provoked and incited under the guidance of the elderly, through their experience and knowing.

Proves of the effectiveness

Started as a single initiative with a dozen of participants, this initiative turned into an annual event sought after by children and young people from the region, country and abroad, organized and promoted by the local government. The local government has recognized this initiative as a distinctive innovative achievement with a capacity to contribute not only to the local cultures/ people of all ages from the region, but as a means to promote the local cultural achievements worldwide and to contribute with the regional specifics to the world culture. The local authorities even undertook all the efforts necessary, so as this idea to be recognized as a brand, belonging to the city of Gabrovo (the ideas is a registered brand in the Patent institution).

Gabrovo was a candidate for the third "UCLG Mexico City – Culture 21 International Award" (November 2017 – May 2018). The jury requested the Committee on Culture to promote this project as one of the good practices, implemented through Agenda 21 for culture.

This article was written by Sevdalina Nenkova, Gabrovo Municipality, Bulgaria 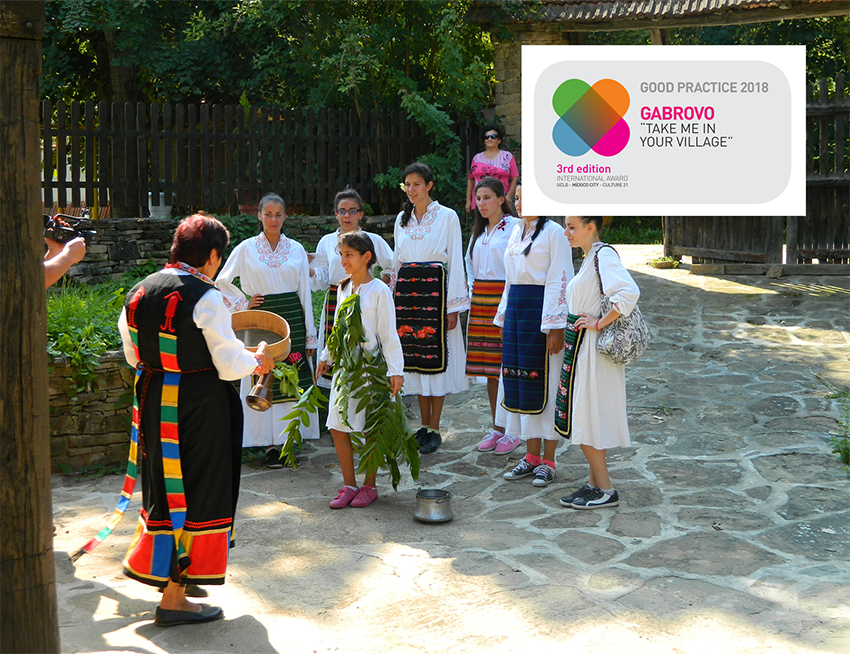