The Spirit of Enterprise

The City of Greater Dandenong is the capital of Melbourne’s south-east. Located approximately 35km from Melbourne CBD, the city spreads over 129 square kilometres, ans has a population of 160 000 inhabitants. The City of Greater Dandenong is home to more than 150 different nationalities, as well as 2 000 asylum seekers. More than half of its inhabitants were born overseas, and more than 70per cent speak a language other than English (Vietnamese, Khmer, Chinese, Greek, Punjabi, Sinhalese, etc.), making it Australia’s most culturally diverse community.

Greater Dandenong is located on a territory nested in the foothills of the Dandenong Ranges, an area which was inhabited for tens of thousands of years by the Wurundjeri and Boonerwrung (Bunurong) tribes of the Kulin Nation. Today, it is a progressive, culturally diverse place to live, work and visit, with a vibrant economy in both retail and manufacturing sectors, and some of Victoria’s most culturally exciting places.

The City of Greater Dandenong has a rich and diverse history, reflected in its historical sites and through its Indigenous and migrant history. Springvale plays an important role in the context of that landscape, recognised as an important shopping place between Melbourne CBD and Dandenong.It is home to the largest and most established south-east Asian cultural precinct in Greater Dandenong. Springvale was named in the early 1850s due to its abundance of natural springs.

Springvale waschosen as a location for one of the Commonwealth Government’s purpose-built Migrant Hostels, known as the Enterprise. It was designed to meet short-term housing needs due to migration during the 1970s and 80s. Between 1970-1992, it provided accommodation and services to more than 30,000 migrants and refugees from across the world. In 2007 a group of people came together to document the history of the Enterprise Migrant Hostel for an exhibition at the Melbourne Immigration Museum, as a way of telling the unique Enterprise story to a wider audience. The project quickly garnered community support and evolved into a number of initiatives designed to remember and honour the positive impacts of the Enterprise Hostel for Springvale and for Australia.

The history of the entreprise migrant hostel is a story of thousands of people coming to this place to seek safety and start a new life. It's a story that had to be told and recorded, to invite us to reflect on our past and future.

The Spirit of Enterprise Project seeks to document, honour and celebrate in the public realm the specific history of the Enterprise Migrant Hostel, and the story of migration and settlement in Australia.

The Spirit of Enterprise Project, which began as the Enterprise History Project, was renamed once it was recognised as a project of “National Significance”. It started as a five-month exhibition at the Melbourne Immigration Museum, composed of illustrated individual stories and a 20-minutes video.and was later transferred to the Springvale Historical Society for a further three months. It was complemented with the development of the website www.enterprisehostel.org, funded by the Victorian Multicultural Commission (AU$20,000), which contains much of the exhibition and associated research material.

In addition, an extensive community consultation process was launched in January 2011, funded by the Victorian Department of Planning and Community Development (AU$30,000). A final report (“I’m Home - Honouring the Enterprise Hostel/The place where I first lived/my first home”), available online, outlines the process and findings of identifying how best to honour the Enterprise Hostel in the public realm, and sets out a strategy for achieving its ambitious goals in a vision statement. Its recommendations continue to be implemented more than 7 years later.

The installation was funded by the City of Greater Dandenong, including project support for story development, sign documentation, installation and maintenance. The cost was $55,000. The design of the signs subsequently received the SEGD Global Design Merit Award 2015 for their dynamic sculptural form.

The Spirit of Enterprise Project was initiated by The Enterprise History Project Organising Group, including Merle Mitchell, Betty Wilderman, Heather Duggan, the late Joyce Rebeiro, Jan Trezise, Rosemary McLeod, Don McLeod, and the late Eric Mitchell. Their vision mobilised more than 500 people from the community, involved in different stages throughout the life of the project.

The Spirit of Enterprise project documents the visionary and innovative response of the then city of Springvale (now city of Greater Dandenong) to a dramatic increase in the cultural diversity of the residents with the arrival of migrants and refugees.

Through this project, Local Government successfully mobilised people to become active citizens in the planning and production of their place, and to be the co-authors of public heritage expression within the city. More than just an exhibition of a particular time in history, this project demonstrates how strong, cohesive, vibrant communities can be built when migrants and refugees are warmly welcomed through unique, innovative settlement programs and public policies based on mutual respect.

The project provides a model of how Australians can be invited to participate in the cultural life of the nation through community engagement. The Spirit of Enterprise Project has successfully encouraged the Enterprise community to be involved in creative pursuits through story-telling, exhibition, website design, city planning and a range of identified public art and heritage initiatives. As such, their work played a great role to develop part of Springvale’s local identity, and its place within the national identity. It also demonstrates the community’s ability to create an ambitious and profound vision and work through the myriad of complexities to realise this vision.

The Spirit of Enterprise Project offers people the opportunity to better understand, reflect and contribute to the cornerstone of Australia’s culture as a place of migration. It provides a creative educational platform for future generations, by documenting and re-presenting a common Australian story of resettlement. Having projects such as this within a local context offers young Australians a new perspective on their environment, inspiring future audiences to value shared experiences. The significant volunteer efforts and ongoing intangible impact of the project on people’s wellbeing, sense of self-worth and identity, now and for future generations, is immeasurable.

Each stage of the project has individual evaluation and performance measures. These include:

Many people contributed to the project with memorabilia they had not looked at for years. People spoke about the opportunity they had been given to talk with their children and their grandchildren about their experiences in ways they had not been able to do previously.

Citizen’s direct participation in creative and public heritage expression has been instrumental throughout this project to build strong, cohesive and welcoming communities.

The realisation of the complete vision of the Spirit of Enterprise Project continues to rely on the ongoing support of local citizens, different tiers of government, and authorities and organisations who have become project stakeholders.

This is continuing through the development of a brochure and map of significant sites in the framework of the Community Honour Walk. Once the Honour Walk is finished, people will be invited to contribute to a memory box to bring closure to the historic part of the Enterprise experience, and through sharing their own story.

The participation of the local community is expected to keep influencing and guiding the future development of the former Springvale Council offices site, in partnership with the City of Greater Dandenong.

"At my place there is always a red rose - a symbol of the start of my life in Australia."
A former resident of Enterprise.

Dandenong was a candidate for the third "UCLG Mexico City – Culture 21 International Award" (November 2017 – May 2018). The jury for the award drew up its final report in June of 2016, and requested that the Committee on Culture promote this project as one of the good practices to be implemented through Agenda 21 for culture. 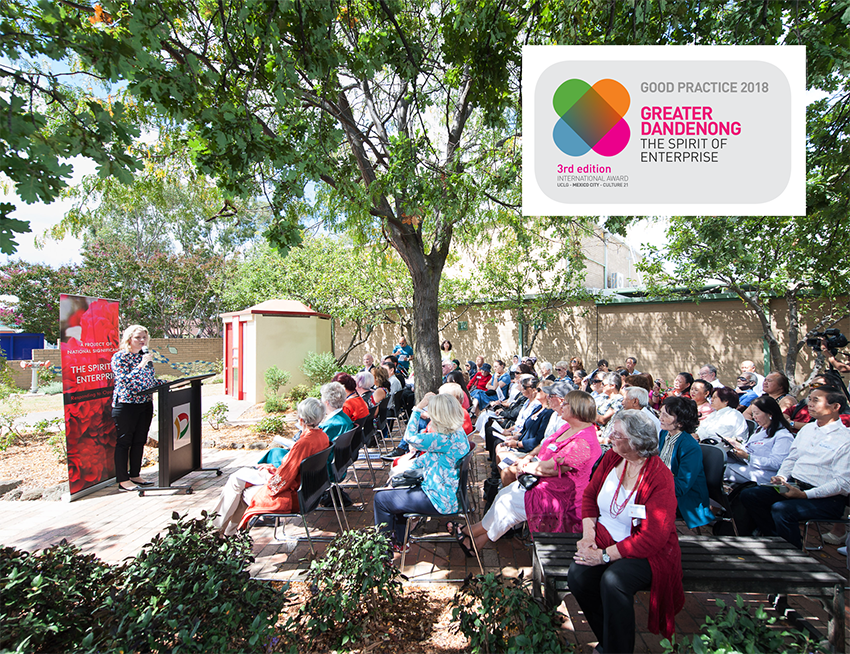