Social development policy: culture as a driver of social progress

Pincourt is a town of about 15,000 inhabitants located on the outskirts of Montreal, in the Vaudreuil-Soulanges region. Founded in 1960 on an island shared with three other municipalities, the town covers 7.11 square kilometres, and has a population density of 2,048 inhabitants per square kilometres.

This suburban bedroom community is mostly composed of small houses around a commercial area. It has been calculated that 72% of residents work outside the region. With a median age of 40, the town has experienced tremendous growth and a massive influx of new inhabitants coming from different cultural communities. The population is made up of 16% immigrants and 43% of Anglophones, making it one of the few cities in Quebec to hold the status of a bilingual town, recognised by the Charter of the French Language. Indeed, Pincourt faces many challenges in terms of social cohesion, organisation of local life, and a sense of belonging.

Over the last decade, culture has developed a great deal in the Vaudreuil-Soulanges region. The Regional County Municipality (RCM) has adopted a Cultural Policy, and the most populous town in the region has set a new benchmark for cultural initiatives. Cultural mediation is increasingly used and several events have been organised to reflect the scope and impact of the work of cities, NGOs, and artists.

While Pincourt does not yet have its own cultural policy, this trend has still had an influence on its social development through culture and cultural mediation.

The town's social development policy makes it possible to respond to the needs of citizens as defined by them, and to implement solutions that directly involve them.

While the town was developing policies for family and seniors, one citizen proposed a more innovative and inclusive approach that would meet the needs of all citizens. Instead of carrying out several approaches for specific audiences, the aim was to design an overarching social development policy (SDP) capable of responding to challenges. It provides a framework for social policies and action plans, such as the action plan for persons with disabilities.

The SDP makes it possible to better respond to the needs of the town's most vulnerable citizens and to those wishing to participate in local social development. Under the authority of the town council, a monitoring committee made up of members of civil society is in charge of outlining policy along with the support of a committee of elected officials responsible for social development and culture.

The general objective of the Social Development Policy is to improve citizens' quality of life.

Specific objectives identified in the latest SDP Action Plan include:

The social development policy was adopted in 2013 and is a citizen participation approach that aims to improve people's quality of life through collective intelligence.

Since 2013, two action plans have been developed under the SDP, in which culture occupies a key cross-cutting position. It centres on four modes of intervention:

SDP partners, both in terms of the action plan content, and the implementation of activities, include schools, early childhood centres, citizens' committees, community organisations, and businesses.

The governance of the town has been transformed with the creation of the Social Development and Culture Division, and the establishment of a monitoring committee for the SDP as well as four citizen committees. Citizen consultations have become more and more frequent, as well as cultural mediation techniques. In the local government, using culture as a driver of social development has become increasingly systematic. As a result of the SDP, culture has spread to other departments and other areas of town politics.

Impact on culture and cultural stakeholders in the town

The SDP has encouraged community organisations, local artists, and institutions such as the municipal library to collaborate more with the town in the area of social development. Initially, the library occupied a more traditional role, lending books and hosting lectures, but recently has adopted a more social approach. The activities carried out have allowed citizens to better know the artists of Pincourt and emphasise their importance.

The citizens' committees generated more than 40 cultural activities for nearly 3,000 beneficiaries. As part of the town's activity programme, around 1,200 meetings were organised for 700 citizens, children, and adults. Partners organised about 50 meetings, while the call for projects generated about 30 activities for nearly 400 participants in the cultural sphere alone.

In addition to the activities already carried out, the annual intercultural festival and its celebration are in their fifth year.

Greater impact on the town or territory and its population

The SDP initiatives are aimed at both the general population and specific groups: families, youth, immigrants, seniors, and persons with disabilities. The increased use of citizen consultations, both in the plan's development and in the activities themselves, has made it possible to engage a significant number of youth and adults in the challenges of municipal politics.

Other significant impacts, which are difficult to quantify, include: improving the health of the inhabitants, promoting literacy among youth, breaking the sense of isolation of the elderly, strengthening skills for youth, improving academic and social success, bringing together different cultural communities, instilling a greater sense of belonging in the town's citizens, and much more.

The monitoring committee ensures the evaluation of the SDP. In total, nearly 3,000 citizens have been involved in these processes, with around 1,500 cultural activities each year.

Support from elected officials was essential for implementing the SDP. Their openness to the monitoring committee and the recommendations issued by citizens' committees have both been major factors in the success of the policy. They have also been valuable allies for the recruitment of volunteers, particularly given their close work with citizens.

Another key factor is having staff that is committed to social development full-time.  Volunteer involvement and the work time provided by applicants in the call for projects doubled the time and effort provided by officials.

Today, the SDP is firmly entrenched in the town, with a permanent place in its structure and regular budgets, with committees and programmes. The policy will be updated with the next action plan in 2020.

The City of Pincourt was a candidate for the third annual "UCLG Mexico City – Culture 21 International Award" (November 2017 - May 2018). The jury for the award drew up its final report in June of 2016, and requested that the UCLG Committee on Culture highlight this project as a good practice in the implementation of Agenda 21 for culture, and as a special mention for the third awarding of the Prize. 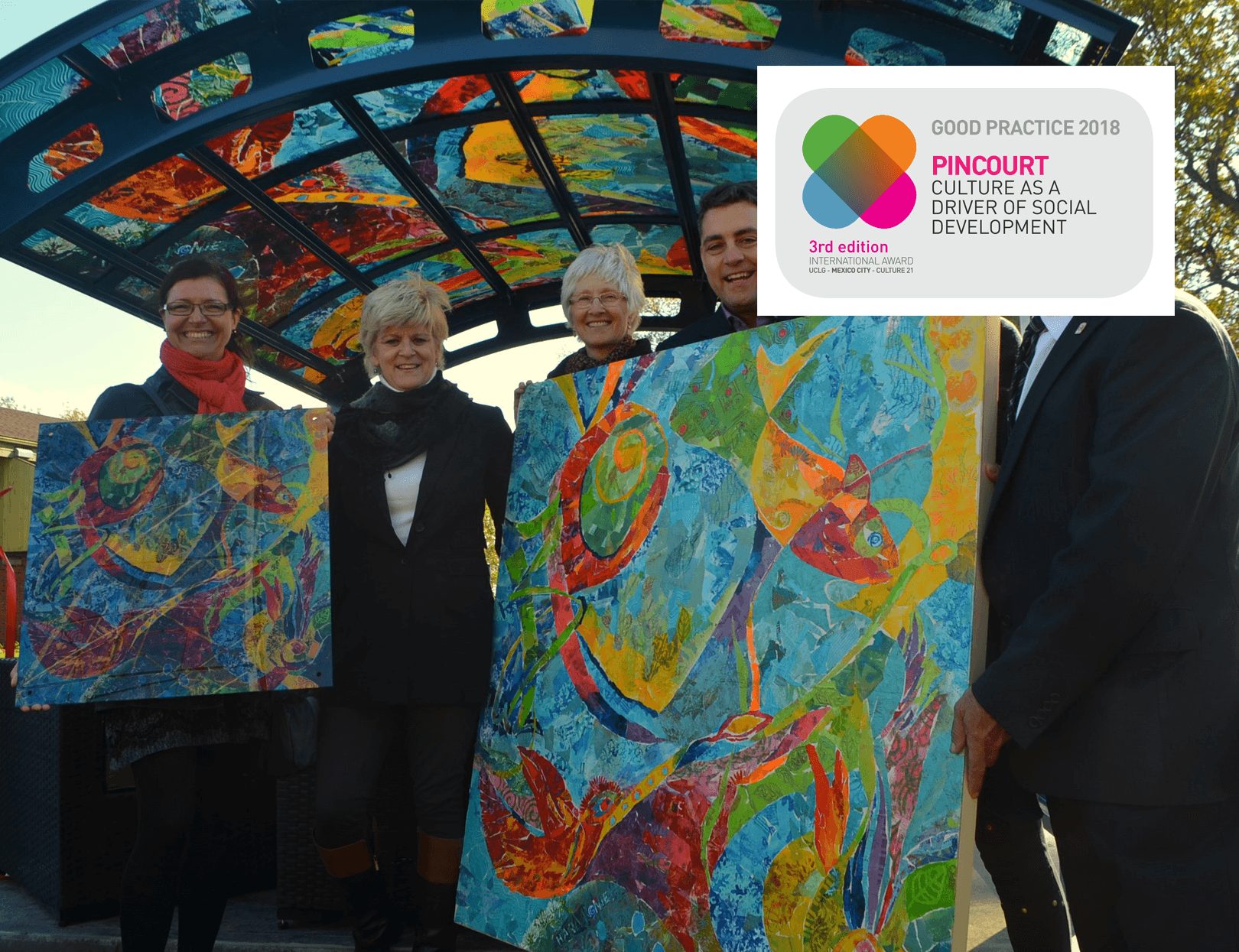