Lake Megantic is the central city in the Regional County Municipality (RCM) of Granit, at the south-east of the region of Estrie, close to the border with the United States (the state of Maine). It is a region of lakes and mountains that form an exceptional natural backdrop, within the international Reserve of Mont-Mégantic. The region also houses the oldest archaeological site in the American north-east.

The town has around 6000 residents, out of a total population of 22 000 residents in the Granit RCM.

Before the tragedy of summer 2013, Lake Megantic was threatened by devitalisation. The demographic trend was falling, the population was ageing fast, and the average income was getting lower. The tragedy cause increased awareness and brought about several citizen initiatives aiming to make Lake Megantic and the RCM of Granit more attractive.

“REBUILDING LAKE MEGANTIC”, WHICH INCLUDES FIRST AND FOREMOST THE PROCESS OF “REINVENTING THE CITY”, IS A CITIZEN PARTICIPATION EXERCISE WHICH ALLOWS A RECONSTRUCTION PLAN TO BE CREATED FOR THE TOWN CENTRE, WHICH WAS DEVASTATED BY THE RAILWAY TRAGEDY OF SUMMER 2013.

The “Rebuild Lake Megantic” project is not the fruit of just one organisation’s work, and this is what makes it powerful. The project started from the initiative of committed citizens, and transformed little by little into a structured approach guided by the municipality(logistical and technical support, financial aid, lending of resources, etc).

The tragedy scarred an entire community. The majority of residents lost either a member of their family, or at least someone they knew. It was necessary to find ways to begin the grieving process together, all the while rebuilding for the future.

At all times, culture aids social cohesion. In a post-tragedy context, it plays an even more obvious and visible role. The fact that the movement first emerged from citizen initiatives testifies to the local cultural vitality. The regional cultural policy identified a low level of citizen participation in terms of culture; the tragedy provoked broad participation, which demonstrated a committed community, gathering its strength in order to get back on its feet.

In 2010, Lake Megantic established the Committee for Arts, Culture and Heritage (CACP), presided over by a member of the municipal council, made up of citizens and representatives from the city’s cultural bodies. The CACP presents musical shows and visuals arts and photography exhibitions created by regional artists. The City also supports the Lake Megantic Culture Committee, and its shows by national artists since 1980. Culture is expressed through a high level artistic creativity, but is also expressed through strong values, which are illustrated in particular by an exemplary sense of social solidarity.

BEFORE THE TRAGEDY, LAKE MEGANTIC WAS THREATENED BY DEVITALISATION. […] THE TRAGEDY CAUSE INCREASED AWARENESS AND BROUGHT ABOUT SEVERAL CITIZEN INITIATIVES AIMING TO MAKE LAKE MEGANTIC AND THE RMC MORE ATTRACTIVE.

The project joins several elements from the Agenda 21 for culture and from Culture 21: Actions.

“Rebuilding Lake Megantic” is a citizen participation exercise which allows a reconstruction plan to be created for the town centre, which was devastated by the railway tragedy of 2013. The project takes a sustainable development approach, and accounts for the challenges faced in developing the city and its region. The various initiatives aim to re-establish the community, restore calm in the community, and create new living and meeting spaces.

Eight months after the tragedy, Lake Megantic launched the largest citizen participation process ever carried out in Québec, in order to create a plan for rebuilding the city centre, and identify the priority projects necessary for carrying out this community project. The citizens of the town and the region were invited to share their ideas and their visions for rethinking the town centre as a new reality, and to create a new dynamism.

Overall, 15 public meetings were held over 15 months, without counting the dozens of preparatory meetings that were held. Over 2600 people participated in total. These activities took shape in several ways: sessions for information and exchanges, community workshops, participatory brainstorming about urban planning, a participatory architecture and urban design charrette, etc. Seven subject-based summits were held, of which one focused on the Arts and culture. They led to the Reinventing the City General Assembly being held in March 2015, where 11 projects selected by 200 citizens were presented.

THOUSANDS OF CITIZENS FROM THE CITY AND FROM THE REGION HAVE TAKEN PART IN THE CITIZEN PARTICIPATION ACTIVITES, AND HAVE A DETERMINING INFLUENCE IN ESTABLISHING CONSENSUSES. THE RECONSTRUCTION BUREAU 2015-2020 PLAN OF ACTION IS THE FRUIT OF THEIR WORK.

Following this process, a Reconstruction Bureau was created at the request of citizens with respect to the results of the participation process. The Reconstruction Bureau’s 2015-2020 plan of action establishes the vision and the actions for making the new town centre into an animated living area, on a human level, and a generator for sustainable economic and community activities.

Culture holds a central place , over 100 projects for culture and leisure came from the community and are supported by the municipal authority, or were initiated by the municipal authority itself through its intervention processes, such as: the “Summer Musi-Café” (restaurant-bar and performance venue, devasted by the tragedy), the Great Granit Harvest of Words [la Grande Cueillette des mots du Granit] (co-creation of a piece of theatre, giving citizens the opportunity to express their deep feelings following the tragedy), the Wind Walk [la Marche du Vent] (artistic, cultural and heritage approach was developed in the locations struck by the tragedy), Symposiums on monumental sculptures (47 monumental oeuvres, in reference to the 47 victims), a Commemoration of the Tragedy, “La Petite Seduction” (one of Québec’s most popular television shows filmed at Lake Megantic and placing local artists and artisans in the spotlight), the Nelly-Arcan Media Library (education, information, culture, promotion of a democratic society where everyone has an equal chance of expanding their knowledge), and finally, the Illumination of Sainte-Agnès Church.

All Megantic population have benefited from the activities linked to the project:

The “Rebuilding Lake Megantic” project and its various initiatives have enriched the work of the local government. The participation process most notably allowed a collective vison to be adopted, which rallies citizens together, and offers a reconstruction project in which people work together. The exercise led to strong social acceptability, which will favor the financing and completion of innovative projects.

The cultural organisers have gained a stronger understanding of the area. The size of their role and the diversity of their involvement have helped them to better realise their importance in the community. For example, the Committee for Arts, Culture and Heritage (CACP) has become a vital

participant in the area thanks to the relevance of the actions laid down by its members at the opportune moment, with important projects (Wind Walk, Symposiums on Sculptures, etc.).

Formerly, the culture was subtle, displayed in exhibitions or show spaces. Now, it spills into the streets. Its stronger presence and its greater diversity have allowed citizens to better understand its true significance, which goes far beyond artistic production and distribution. Culture is associated with a way of doing things and living together..

THE PROCESS OFFERS REAL POWER TO CITIZENS […] AND BRINGS ABOUT THE REALISATION THAT CITIZENS ARE THE MAIN ACTORS IN A VIBRANT COMMUNITY AND THE KEY PLAYERS IN ITS DEVELOPMENT, THUS REINFORCING LOCAL DEMOCRACY.

The project contributes to rebuilding the pride of citizens after the immense losses suffered in the railway tragedy. It also allows people to rebuild themselves individually, through action, thanks to the many participatory citizen activities. It favours social meetings and exchanges, thus strengthening the community.

The cultural installations have also allowed citizens to reclaim the heart of their city and thus to contribute to relaunching commercial activities in the sector. They have also helped to attract visitors to Lake Megantic, having significant economic consequences, which allow businesses and jobs to be maintained.

Above all, the process offers real power to citizens. It allows them to increase their level of knowledge about subjects that are important (architecture, urban design, arts and culture, leisure, social and economic development, education, tourism, etc.), and the realisation that citizens are the main actors in a vibrant community and the key players in its development, thus reinforcing local democracy.

For the moment, several activities had been independently evaluated, with no overall evaluation of the collective project. At the heart of the participatory process, participants in health and social services have stated that the citizen participation initiatives play an important role in the reestablishment process. Other studies are planned in this field. Since this is a progressive project, more specific measurement tools could be developed.

The project that will continue to evolve. Financing for this municipal organisation is assured for the next three years, with an option for renewal for two years. The Reconstruction Bureau is made up of five people and had an initial budget of around 2.2 million dollars. The financing is shared between the government of Canada, the City of Québec and a private foundation. Alongside this, the City continues to finance the area’s cultural and social bodies.

The city of Lake Megantic was nominated for the second 'UCLG International Award - Mexico City - Culture 21' (January-May 2016). The awards jury produced a final report in June 2016 and asked the UCLG Committee on Culture to promote this project as a practical example of the implementation of Agenda 21 for Culture, and as a special mention of the second edition of the Award. 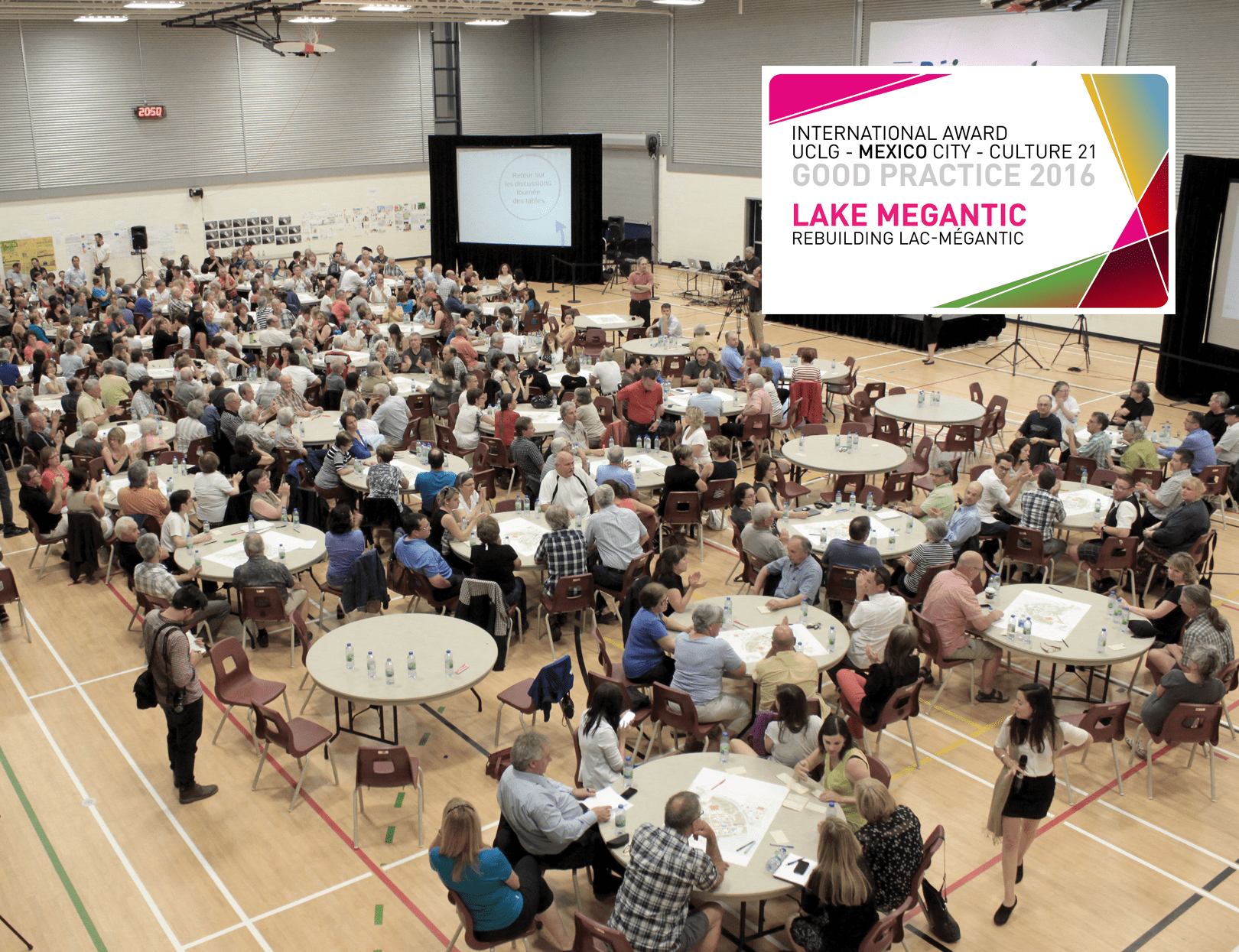