Puerto de la Cruz is a pioneering tourist city in Spain. It has developed a socio-economic model that is constantly improving, strategic planning based on offering culture-based tourist activity, and specific goals set out for 2020.

It is the smallest municipality in the Canary Islands, located on the northern part of the island of Tenerife. It covers just 8.9 square kilometres, and has a permanent population of 33,000 year-round inhabitants, and a floating population of tourists.

Thanks to its exceptional climate and landscape, this small coastal town has seen significant development since the 1960s with the arrival of mass tourism. Eventually, however, it was the model for an international standard on signalling a need for structural revision and modernization, which are currently being undertaken.

Today it is an open city, distinguished by the coexistence of the many cultures from the many countries represented among its residents. Indeed, more than a quarter of its inhabitants were born in another country.

Since the start of the 21st century, the world has undergone drastic change, and Puerto de la Cruz had to adapt to this new reality. The city was a social and tourism benchmark, but still retained a clear objective to meet global needs without losing its identity.

The city set out to develop a plan to emphasize the value of its cultural symbolism, which would help rebuild citizens’ self-esteem and reposition the city as an international example for sustainable development.

As a result, Puerto de la Cruz began structuring processes aimed at creating a stable cultural policy. This approach would include a comprehensive view of the municipality’s social needs and a long-term perspective.

The 2020 Puerto de la Cruz Cultural Strategy (ECPC 2020), branded “Puerto de la Cruz: A Cultural Environment”, promotes creative initiatives as leading aspects of a processes of change, both for the city and its inhabitants. During the first decade of this century, the city was committed to cultural development. It modelled its approach based on Local Agenda 21, adding unique elements and its own methodology.

The cultural strategy of a municipality can be defined as an investment in development that works far beyond the jurisdictions and capacities of a single council by involving all cultural actors that coexist and interact in any given area.

Along with various citizen groups, the City Council of Puerto de la Cruz developed a cultural strategy which would become the main instrument of the city's cultural policy. The approach was based on the precedent set by the Cultural Action Plan of Puerto de la Cruz (2003) and the common framework taken from the approval of the Canary Islands Culture Plan (2011). The 2020 Puerto de la Cruz Cultural Strategy was approved unanimously. It was centred on two core elements: a general perspective to help define a development model for Puerto de la Cruz, and a more concrete one focused on programmes and actions. This Cultural Strategy ensured a broader point of view that was not exclusively focused on urgently scheduling cultural activities.

One of the plan’s defining characteristics is the degree of involvement that has been achieved by nearly all local cultural agents in a common project.

The ECPC 2020 emerged in connection with other international processes, such as Local Agenda 21. Puerto de la Cruz was the first municipality in Tenerife to take advantage of this project, adapting its perspectives to cultural planning and to specific local idiosyncrasies based on the following shared concepts:

This initial assessment establishes a  necessary framework for collaboration, consensus, understanding, and dialogue as the essential foundations of the Puerto de la Cruz cultural strategy.

This initiative establishes the archipelago as an Atlantic Cultural Model, explicitly investing in the creative and cultural industries, as was also affirmed by the Department of Tourism under the Island Council of Tenerife in its 2020-2030 Tourism Strategy.

The main objective of the project is to strengthen the core of Canarian culture, and turn it into a key part of the city’s activity and its development model.

Some of the specific objectives underlying the 2020 Puerto de la Cruz Cultural Strategy are:

The events are not meant to be niche, but instead offer cultural activities for everyone, designed by the Municipality as a result of strategic citizen participation.

One of the most important achievements to date is the organization of different festivals and projects throughout the year, such as the Mueca international street art festival, a pioneer in the region for its social impact, outreach, and management model. Other interesting events have also been held, including Periplo, the international travel and adventure literature festival (2013), or the Phe Festival (2016), a benchmark for independent music and new trends.

These events are part of the project’s overall strategy, with notable performances in Tenerife for the Canary Islands Jazz Festival, or other broader impact and public participation initiatives like the San Juan Festival at Playa Jardín, the Puerto Street Art murals, the Agatha Christie Festival organized by the Tourism Initiatives Centre every two years, or specific classical music gatherings, such as the Bach Festival or the Baroque and Early Music Festival. In 2017, the Alios Project was establish, dedicated to the modern-day circus. It offers cultural events organized by the municipality as a result of strategic planning through citizen participation. All these projects are supported by municipal institutions, which help provide structure based on sustainability, citizen experience, and tourist participation, in which the latter are considered inhabitants of the city, too.

Implementing the 2020 Puerto de la Cruz Cultural Strategy established links between people, groups, and institutions that were not previously connected or lacked clear unity. This redefined culture as a catalyst for cohesion, development, transformation, and democratization, rather than the niche and basic artistic element it was thought to be.

Simultaneously, there were also changes to the types of citizen participation. Citizens are now involved as active agents in decision-making processes for the city’s cultural policies, as well as in other key parts of development.

One notable example is the Mueca Associate Platform, which has been very active in recent years. It emerged as a reaction by citizens to the cancellation of the Mueca Festival. Today, it stands as an international example for its organizational model, which resulted in a co-managed and co-participated project. These are some of the city’s other work platforms:

Where culture was once determined by and for traditional decision-makers, the city began viewing culture as a factor for cohesion, development, transformation, democratization, and equal opportunity.

Currently, the way to develop cultural policies in Puerto de la Cruz serves as a model for other regional and island institutions.

Of these approaches that use culture as their core value, there are two notable examples that have been established at the regional and island-wide level.

First, the Department of Tourism under the Island Council of Tenerife has recognized a need to promote culture and its industries in the Tourism Strategy. This would help establish the region as a more solid and competitive tourist destination, subsequently ensuring the population’s well-being and cohesion. This initiative is also present in documents such as RIS3 and in the Canary Islands Smart Specialization Strategy (2014-2020).

Like any organic process, it is not without its difficulties. Inflexibility, distrust, and uncertainty are clear challenges to sectors when adhering to changes proposed by the new model. This is especially true within the organization itself. However, the project has managed to dislodge individuality and distrust thanks to the influence of citizens. This change has been decisive in ensuring successful implementation.

The actual results correspond to the lines of action outlined in the main objectives of the 2020 Puerto de la Cruz Cultural Strategy:

The work platforms that implement the 2020 Puerto de la Cruz Cultural Strategy are organic. As a result, ongoing evaluations of its actions are carried out before, during, and after the development of each initiative under this framework.

Each of these work platforms is made up of two of its own representatives plus members of political parties, with representation in municipal plenary meetings. The members of the various platforms are part of a monitoring body called “A Good Port Platform”, which is a space for ongoing evaluation and control of the project’s initiatives.

The vital element for the success of the project was the use of different methodologies:

This project will ensure continuity by reinforcing cultural policies under the 2020 Puerto de la Cruz Cultural Strategy, consolidating work platforms to create “A Good Port”. In addition, the creation of other self-organized groups and platforms that are associated with new projects and processes within the ECPC 2020 framework will be strengthened.

“Puerto de la Cruz: A Cultural Environment” was a candidate for the third “UCLG Mexico City – Culture 21 International Award” (November 2017 - May 2018). The jury for the award drew up its final report in June of 2018, and requested that the UCLG Committee on Culture promote this project as one of the good practices implemented under Agenda 21 for culture. 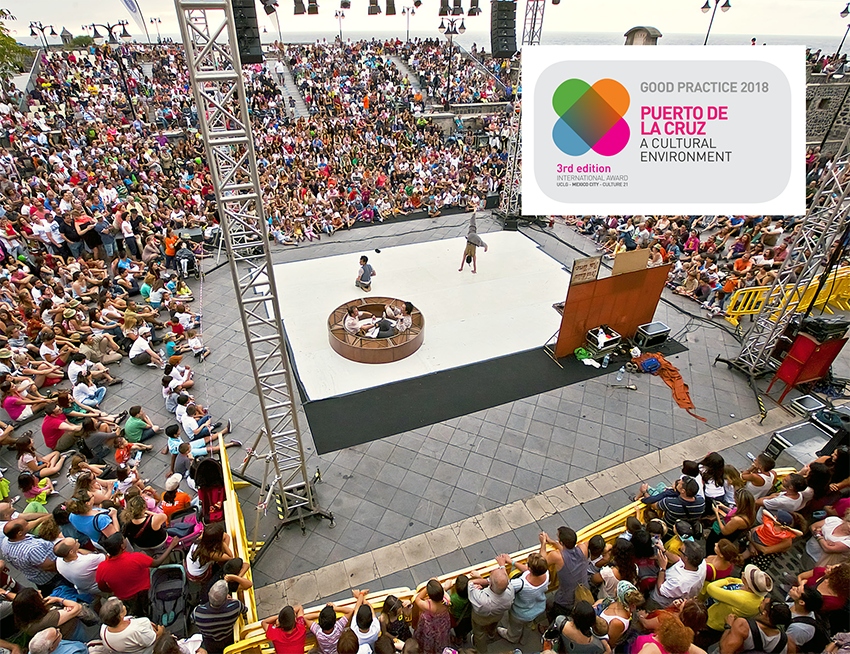