Hamilton is the 10th largest city in Canada (550,000 people), situated between Toronto and Niagara Falls. Hamilton has a proud industrial history and has been nick-named “steel town”, reflecting a time when steel ruled the economy.

Over several decades, Hamilton’s booming economy attracted many people. As a result, it has the third highest proportion of foreign-born residents in Canada after Toronto and Vancouver.

Hamilton has the most diverse economy in Canada with health sciences being its largest employer. It is also home to three post-secondary institutions, including McMaster University.

Hamilton’s two most significant geological features are its bay and the escarpment (which in 1990, UNESCO named an official “biosphere reserve”), Being very abundant in natural heritage and is, unofficially, the waterfall capital of the world, with over 120 waterfalls.

Hamilton has reinvented “steel town” and culture is a big part of its renaissance.

In 2004, the City Council requested staff investigate the development of a Cultural Plan for the City of Hamilton. The pre-cursor to Council’s endorsement was a series of forums hosted by the Ontario Ministry of Culture and a newly formed Municipal Cultural Planning Partnership to explore the international practice of cultural planning. The manager of civic museums in Hamilton at the time, Anna Bradford, attended the forums and saw the opportunity for Hamilton to shift from single-stream services (e.g.: museums) to an emerging practice that would bring a holistic approach to culture.

The overall goal of the project was to transform the city's understanding of, and approach to, culture, by embedding cultural awareness into the city's approach to city-building and planning, resulting in the cultural plan.

Securing resources and Council approval was the start of what would become Hamilton’s first Cultural Plan. The project was multi-phased, garnering increasing levels of support, and ultimately establishing a Cultural Plan that embeds culture as the fourth pillar of sustainable development. The milestones included building capacity (experts), cultural mapping, and identifying linkages with other municipal, regional and provincial policies. The policy linkages were vast and at that time, the future Cultural Plan demonstrated alignment to major plans of the day, such as the Official Plan, Vision 2020, the Strategic Plan, and significant regional studies. In addition, it linked to plans in a wide range of categories such as land use, social, economic development, creative cultural sector, and public art.

The Cultural Plan emphasizes the importance of culture as a factor in the creation of wealth and economic development (Principle 12). A Pilot Study in eight neighbourhoods used cultural asset mapping data to visualize culture’s role in place making. Culture is recognized as a key driver within the 2016-2020 Economic Development Action Plan. One area of focus is business development of Creative and Cultural Industries (Principle 10).

Hamilton’s Cultural Plan supports the worldwide movement to embed a cultural lens within other City agendas (Principle 10). This view has garnered broad community support with 92% of Hamiltonians stating culture is key to the quality of life in Hamilton.

The City of Hamilton has secured public funding for culture by means of the necessary instruments (Undertaking 20). Overall, the Council invested an additional $1,000,000 in arts funding between 2015 and 2017.

Staff from the City of Hamilton have been working with McMaster University’s Student Union to expand student engagement, and participation in culture via on-site events at McMaster University, (Principle 13). In April 2015, McMaster University’s Digital Storytelling Project documenting Hamilton’s intangible heritage was awarded a $200K grant over three years from the Social Science and Humanities Research Council. (Undertaking 40).

Hamilton was one of seven municipalities that participated in the development of a guidebook on cultural indicators led by the Canadian Urban Institute. Hamilton hosted in 2014 the annual Creative City Summit of Canada, further promoting the principles of cultural cooperation and solidarity. Most recently, Hamilton was invited to Helsinki by the Nordic Urban Lab, to co-present on cultural planning in Canada.

By setting a formal holistic and integrated cultural plan, with input from than 2.300 stakeholders using a variety of engagement methods, Hamilton placed people at the centre of the cultural plan.

The overall goal of the project was to transform the City’s understanding of and approach to culture. For Hamilton, this meant embedding cultural awareness into the City’s approach to city-building and planning. The result was the Cultural Plan that positions culture as key to Hamilton’s sustainable future as a vibrant, successful and complete community. Council approved the Cultural Policy in June 2012 (Report PED12117) and the Cultural Plan in October 2013.

Hamilton’s cultural renaissance is well underway and Hamilton’s Cultural Plan set high level priorities for city-building through cultural development. The ongoing project is a corporate wide, holistic, integrative and multi-year plan which sets goals and a common lens rooted in the Council approved (2013) Cultural Plan. The intent of the plan is to guide the work of City staff through collaboration and a “shared responsibility for culture” that ultimately serves the 550,000 citizens of Hamilton.

The Cultural Plan is organized around eight transformational goals:

The main actions carried out during the planning phase of Hamilton’s Cultural Plan:

Maintaining meaningful ongoing citizen involvement has been a challenge. Although the City started strong with an open process and recruited passionate people to serve on a Cultural Roundtable, there was a challenge in sustaining a meaningful role for the group.

A second obstacle is that approximately one-third of the actions in the (ambitious) plan are un-resourced. In some cases, other stakeholders are responsible for carrying out the actions and competing priorities have limited advancements.

A third obstacle is implementing a Cultural Report Card that informs City Council and citizens of the cumulative impact of culture. Annual reports on the status of the Cultural Plan summarize activities and highlight achievements but do not measure progress on longer term impacts in a logical framework. A wish list of measures has been drafted (based on community and City staff input), but the project will require new custom research and design expertise to successfully develop.

The cultural plan represented a philodosphical shift within Hamilton: When it was approved, one of the councillors remarked that it "is a game changer".

Hamilton’s Cultural Plan has also impacted Cultural Planning in Canada; Hamilton earned national recognition from the Creative City Network for “adopting and implementing an excellent Culture Plan with a process that demonstrates outstanding visionary leadership”. The criteria used included collaborative public engagement, strategic integration with local government services, integration of all aspects of sustainability (four pillars), and an innovative approach and a vision relevant to the community.

The City of Hamilton has not evaluated its Cultural Plan to date, but a progress report is presented yearly to the City Council. As the Plan reaches its five-year milestone in October, 2018, the City’s Cultural Service is initiating a process to review and update it. As part of this process, City staff plan to liaise with the Province’s cultural ministry, other municipalities across Canada, the Staff Advisory Team and the Cultural Roundtable (currently on hiatus pending next steps). The City is committed to reviewing the successes and gaps by conducting open consultations in order to move forward with collective ownership and a shared responsibility for culture.

In addition, the City of Hamilton plans to continue the development of its Cultural Report Card that would measure and explain the impacts of culture, not only year to year, but also cumulatively.There is growing interest across Canada to measure culture and Hamilton is participating in the National Cultural Statistics Consortium led by the Department of Canadian Heritage. The first “proof of concept” GDP and job figures were released in February, 2018 and Hamilton would like to conduct a local study to help validate the data for Hamilton.

Hamilton earned national recognition from the creative city network for "adopting and implementing an excellent culture plan with a process that demonstrates outstanding visionary leadership".

The Cultural Plan is embedded in the following ongoing projects:

The Hamilton Public Library is leading a Storytelling project which has established a framework to build a community narrative. The project started as a pilot to build the technology platform (2016) and is now an ongoing program that aligns to the Cultural Plan (Building Community Identity and Pride).

CityLAB is an innovation hub for experimental projects co-designed by City staff and students from McMaster University, Mohawk College and Redeemer University College. The model embraces design thinking and supports the four pillars of sustainable development, including cultural vibrancy.

There are 15,000 urban Indigenous peoples living in Hamilton. The City is developing an Urban Indigenous Strategy that will strengthen the City’s relationship with the Indigenous community and promote a better understanding among all residents about Indigenous histories, cultures, experiences and contributions.

Hamilton was a candidate for the third "UCLG Mexico City – Culture 21 International Award" (November 2017 – May 2018). The jury for the award drew up its final report in June of 2016, and requested that the Committee on Culture promote this project as one of the good practices to be implemented through Agenda 21 for culture. 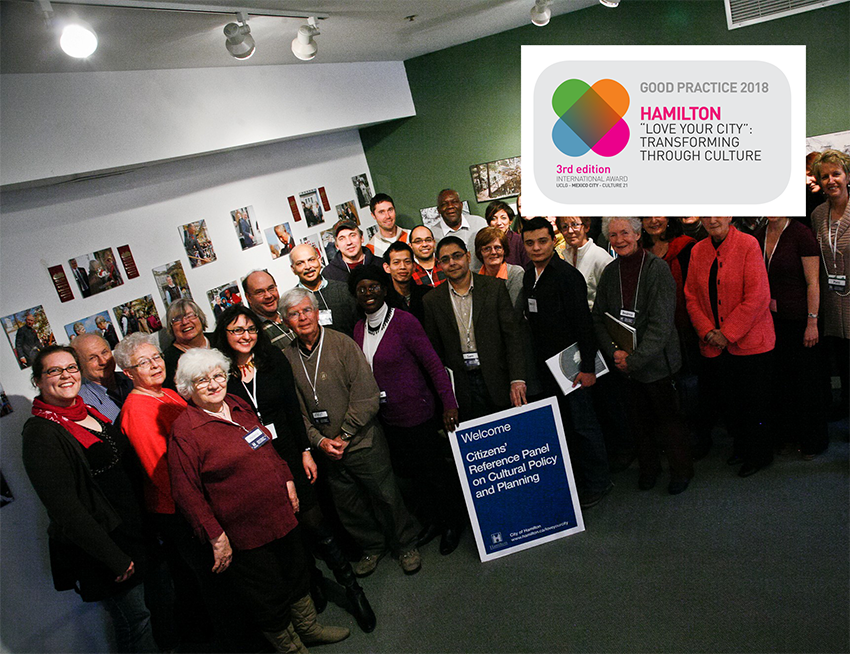