Salvador has an estimated population of about three million people. Tourism and cultural activities are important sources of employment and revenue, which drives the need for the arts and the preservation of cultural heritage. The city is notable for its African population, which is reflected in its music, dance, and cuisine. Salvador is highly regarded around the country, and this is noticeable in its tangible and intangible heritage. Indeed, it is a complex city. Its strong, diverse cultural richness requires ongoing study and support for the variety of cultural expressions. As a result, it is important to listen to the needs of the society, and to align actions with proper assessments of the city's cultural landscape.

The aim of the programme is to preserve and spread traditional capoeira knowledge and practices both inside and outside the city of Salvador.

Salvador, was the first capital of Brazil and boasts rich cultural and historical heritage which is evident in its buildings and its society's collective knowledge. However, even prior to the current political administration, the city had never developed policies for the conservation of this heritage. In order to amend this, the Heritage Law was enacted, which instituted standards for the protection and conservation of cultural heritage throughout Salvador. The law regulates the process of designating or registering tangible and intangible assets as cultural heritage. It also indicates the authorities and decision-making process involved in conservation efforts.

The General Urban Development Plan (PDDU) by the Municipality of Salvador, or Section V, reiterates the vision for cultural policy as a key element for society. Current administrative strategic planning redrew the city limits taking into account geographical, social, and road network concerns.

The city's cultural policy is directly linked to Agenda 21 for culture (A21C) as it establishes culture as a central element of human development. It also promotes the value of cultural diversity and participative democracy for cultural development. The actions carried out by the Gregório de Matos Foundation (FGM) were planned along with the compromises taken from A21C, after having identified the city's needs. In accordance with some of the compromises of A21C and the policy on designating heritage status, the Foundation has sought to expand its capacity for action around preserving city's memory and identity.

To preserve and spread traditional capoeira knowledge and practices both inside the city of Salvador and around the world.

The association to carry out the Living Capoeira Programme was developed by the Ministry of Culture, Petrobras, and the Gregório de Matos Foundation. The Ministry of Culture designed the initiative, Petrobas sponsored the programme through the incentives law, and after receiving resources the FGM promoted the actions. Brazil's Ministry of Culture organised the call for tender for the project. Collaboration with the federal government was the ideal outcome for this programme. The sectors of the population that benefitted included teachers, professional groups, business owners, artists, interns, institutions, and organisations. It also affected those who participated in activities related to the Living Capoeira Programme, including the registered calls for tender and funding projects implementation, participation in meetings and workshops, as well as those involved in the open enrollment in the registry through FGM.

An easy-access public database was built. This tool facilitates coordination between cultural actors, the ability to identify groups and teachers, and the identification of developed social activities. It also helps to identify where actors are geographically located.

Heritage legislation enables capoeira teachers and licensed practitioners to create employment, as well as to establish mechanisms for ensuring qualifications and formal training. The law also helps to institutionalise the city's specific policies around capoeira. Furthermore, these regulations help to fortify partnerships between groups and promote the exchange of knowledge. Financing capoeira projects has helped to develop the cultural economy for many traditional cultural groups.

The funding and feasibility of capoeira projects contribute to fortifying the identities of participant groups, and of the Afro-Brazilian community, who help to maintain the tradition. A point of view that positions culture as a central aspect of human development makes significant changes to paradigms and strengthens senses of cultural belonging for Salvador's residents.

Capoeira is essential for strengthening brazilian identiy, and a strategic way of promoting Brazil around the world.

Actions geared towards the conservation and importance of capoeira lend visibility to cultural traditions. This subsequently reduces inequalities, particularly because financial support expands access to public policies, which is a right for all citizens.

The Gregório de Matos Foundation has implemented a project policy for all cultural areas. Each project has a technician who supervises its implementation, addresses concerns, and ultimately evaluates the project based on the proposed indicators and results obtained.

Salvador's Capoeira Registry remains open to allow all participating cultural actors to register and obtain their information, organized within a platform. The platform enables the implementation of cultural policies geared towards the sector. In addition to the development of public policies, capoeira is essential for strengthening Brazilian identity, and a strategic way of promoting Brazil around the world.

Actions geared towards the conservation and importance of Capoeira lend visibility to cultural traditions. this subsequently reduces inequalities, particularly because financial support expands access to public policies, which is a right for all citizens.

The City of Salvador was a candidate for the second "UCLG Mexico City – Culture 21 International Award" (January – May of 2016). The jury for the award drew up its final report in June of 2016, and requested that the Committee on Culture promote this project as one of the good practices to be implemented through Agenda 21 for culture. 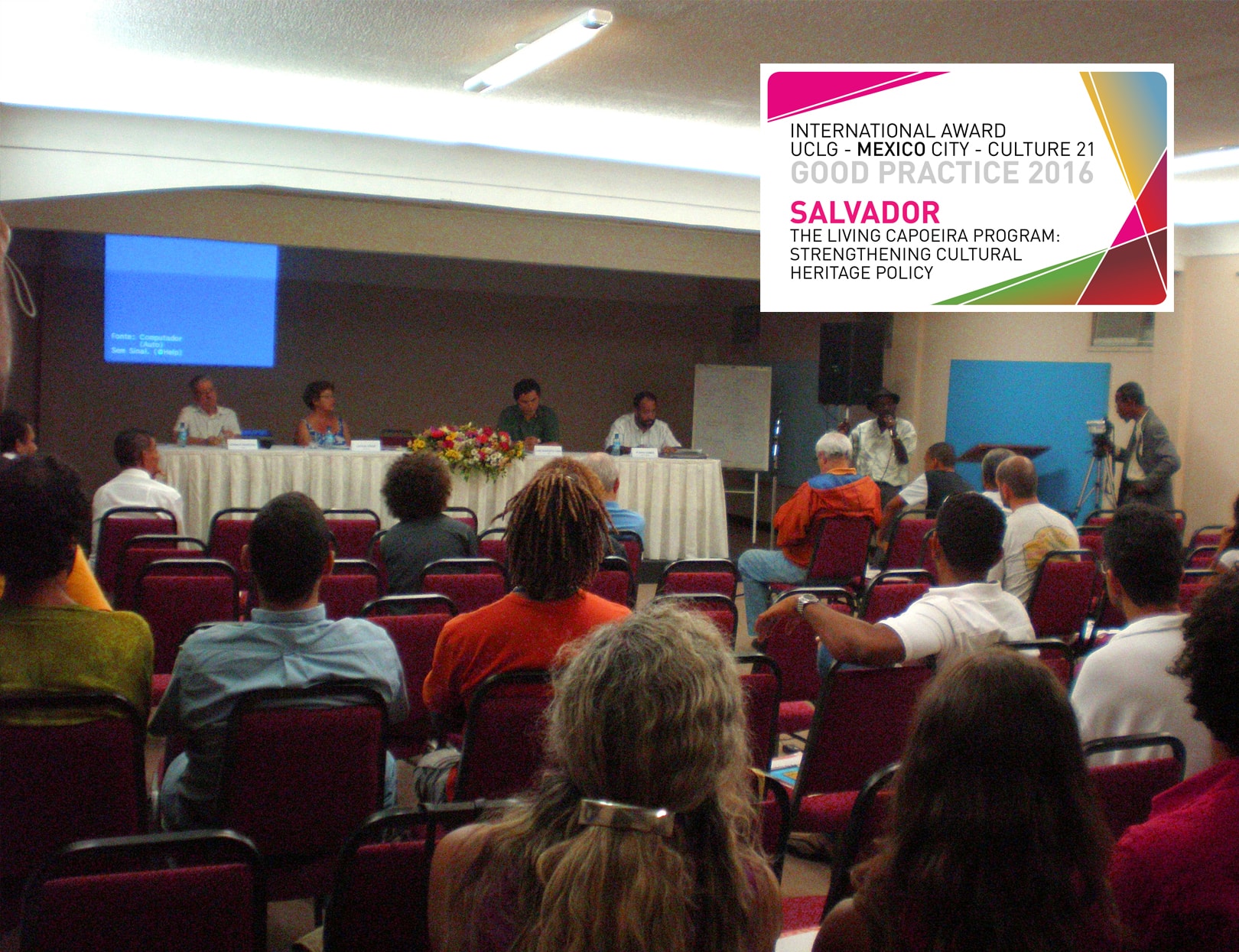