The Old Town of Regensburg, in Germany, lies on the Danube and is an inner European mediaeval centre of trade. The interaction between cultural and architectural influences is emphasized. Out of a total city population of 150.000, 15.000 inhabitants live within the core zone of the heritage asset, which incorporates 183 hectares and about 1000 listed monuments. Compared with the centres of other cities, the Old City of Regensburg has a distinctive degree of multifunctional quality (homes, work places, leisure, gastronomy…). The urban structures are a reflection of 2000 years of continuous building and encompass Roman, Romanesque and Gothic elements. Regensburg‘s stock of buildings, originating from the 11th to the 13th centuries, continue to imbue the urban landscape with its tall buildings, dark and narrow lanes and strong fortifications. These structures include medieval patrician houses and towers, a large number of churches and monastic ensembles, as well as an old stone bridge, from the 12th century. Since 2006, the Old Town of Regensburg with bears the title of a UNESCO World Heritage.

The aim is to develop a new approach to manage historic urban areas by matching the inherited urban landscape with the identity of the modern demands of its users.

The City of Regensburg has started in cooperation with cultural operators, artists and the citizens of Regensburg a process to shape the future cultural landscape and lay down the conditions under which art and culture can unfold in the coming years: The Cultural Development Plan “Agenda 2020”. It represents the action-guiding framework of cultural policy for the next few years. The cultural policy "Agenda 2020" is to be understood as part of the general urban policy. The City of Regensburg feels obligation to its past and its cultural history and at the same time accepts the challenges through current tendencies. For assuring continuity and tradition on the one hand and the further development of a lively urban space on the other hand, the future role of a World Heritage title and its impact on the civic society as well as the cultural live hat to be taken into account in the Cultural Development Plan.

To integrate the awareness for the cultural heritage into local and regional sustainable development is the underlying intention of the Management Plan process and implementation. This strictly correlates with the principles as mentioned in the Agenda 21 for culture. As to be read in principle 9, “Cultural heritage, tangible and intangible, testifies to human creativity and forms the bedrock underlying the identity of peoples. Cultural life contains both the wealth of being able to appreciate and treasure traditions of all peoples and an opportunity to enable the creation and innovation of endogenous culture forms.” The question of identity of people, of a city, of a complete historic urban landscape is inextricably connected to the question of its past and heritage. An integrated Cultural Management Plan is the innovative instrument to effectively manage the sustainable safeguarding and development of historic urban areas and their cultural heritage with the intention to have attractive, competitive and multifunctional places.

The Integrated World Heritage Management Plan’s fundamental aim is to develop a new approach to manage historic urban areas by matching the inherited historic urban landscape and structure as well as the identity of the place with the modern demands of its users. This can be made possible by turning the cultural heritage, both tangible and intangible, into a prime resource to fulfil these competing demands, without downgrading its intrinsic qualities. All local stakeholders are to be identified and integrated into the process permanently, and a monitoring system has to further on guarantee the successful implementation of the plan.

The Integrated World Heritage Management Plan for Regensburg was prepared by the Management Plan Work Group and the participants in the World Heritage Dialogue in Regensburg. Diverse stakeholders were invited to participate and collaborate in the elaboration process, amongst them not only city administration departments of all kinds, but also non-governmental groups within the city. Also regional level stakeholders as well as the regional government were integrated into the process and are still ensuring a broad representation of different opinions and interest groups.

The plan strenghtened the awarness of the civil society as well as the stakeholders in the administrative offices for the cultural heritage value of regensburg.

The URBACT programme is a European exchange and learning programme, promoting sustainable urban development. It enables cities to share good practices and lessons learned with all professionals involved in urban policy throughout Europe. Therefore partnerships with Regensburg (Lead Partner), Graz (Austria), Naples (Italy), Vilnius (Lithuania), Sighisoara (Romania), Liverpool (United Kingdom), Lublin (Poland), Poitiers (France) and Valletta (Malta), were designed with the intention to facilitate the exchange between heritage cities about common challenges and chances. The experience within the project, the interaction and exchange with the partner cities, and the lessons learnt were integrated into the local Regensburg development of the Cultural Heritage Management Plan. Ever since its designation to a UNESCO World Heritage site, the whole population of Regensburg was strongly proud of the title and of the city’s history. The Management Plan development process with its integrative aspect in the further years strengthened the awareness of the civil society as well as the stakeholders in the administrative governmental offices for the cultural heritage value of Regensburg.

The integrated approach of the Management Plan was an innovative concept for Regensburg. The special focus on civic participation and the integration of all local stakeholders proved to be the right way of raising a profound understanding and awareness for the manifold fields of action of Cultural Heritage. The work group in a cross-sectoral approach, uniting several administrational branches with local actors from civil society, and the continuing work in a monitoring process, guarantee the broad basis of interest and knowledge. Local solutions are searched for global challenges.

Cultural life in Regensburg profits from several government funds for designated fields of action out of the Management Plan. The World Heritage Visitor Centre was installed in 2011, where a steady exhibition as well as rolling exhibitions on different aspects on culture in a World Heritage city are presented and have been accepted amongst visitors as well as locals alike. The defined activities and concrete measures of the field of action “Culture” are realized as permanent process.

The constant process of civic participation with its World Heritage Dialogue forum has been functioning as door-opener in public. Cultural World Heritage has been made the topic of all citizens and not only of the administration – awareness for its critical preservation as well as the necessity for its continuing protection have been raised in all groups of local population. Constant work of public relations, work with different age groups, activities of all kinds in the fields of action have established the high level of interest of locals and people from the surrounding area in the World Heritage asset.

The Management Plan Working Group continues regular meetings once a year to steer and control; the public dialogue is foreseen for every second year to give new impulses and ideas, and to stipulate further public interest in the World Heritage topic. The Management Plan has become a major tool for the city administration to further integrate cultural heritage in all aspects of city life, be it culture, building, economy, tourism, or else.

The management plan has become a major tool for the city administration to further integrate cultural heritage in all aspects of city life, be it culture, building, economy, tourism, or else.

The City of Regensburg was a nominated candidate for the second 'UCLG International Award - Mexico City - Culture 21' (January-May 2016). The awards jury produced a final report in June 2016 and asked the UCLG Committee on Culture to promote this project as a practical example for the implementation of Agenda 21 for Culture. 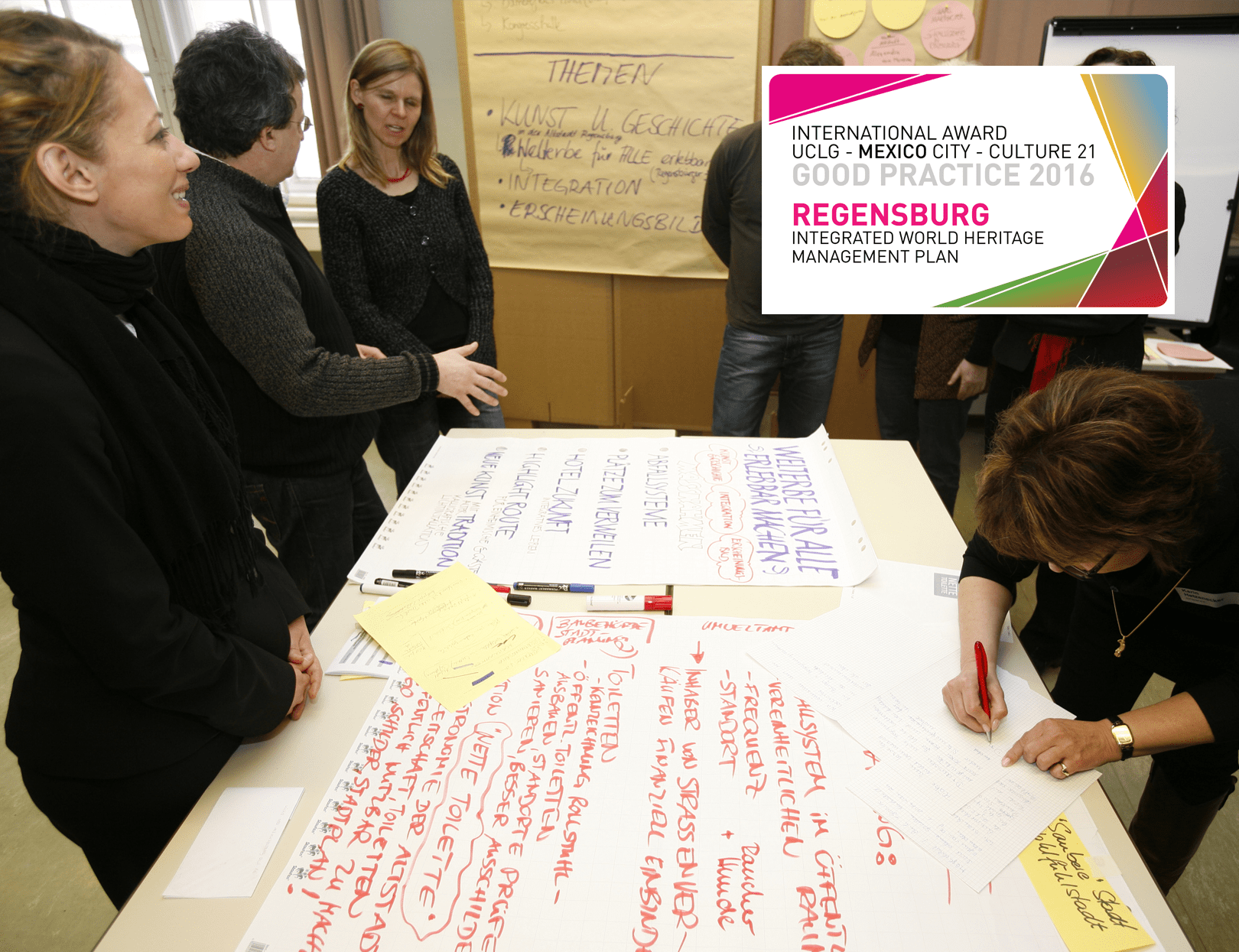