EThekwini Municipality is located on the east coast of South Africa in the Province of KwaZulu-Natal (KZN). The Municipality spans an area of approximately 2297 km2 and is home to 3,5 million people. The Inanda heritage route is part of the Greater Phoenix, Inanda, Ntuzuma and KwaMashu areas. The development in the above areas is managed by a specialised area based municipal office, which fulfils a co-ordination role for all stakeholders in the area. This densely populated area traverses a diverse range of cultures, income groups, economic activities, skills and experiences.

The Project has its roots in the early 1990’s when the Inanda Development Forum was established, consisting of local residents (civic associations, land owners, politicians and other interested parties).

After 1994, two of the members of the forum were tasked to look at tourism and heritage aspects of the area, together with other stakeholders. The idea of developing a heritage route within the area began to take form in the mid-1990s. A strategic plan was developed the Inanda Community Tourism Bureau, (ICTB), was developed as an institution to drive tourism and route development in the area.

The 1996 White Paper on Arts, Culture and Heritage & the Cultural Laws Amendment Act of 2001 – recognize that South Africa is on the brink of experiencing a cultural Renaissance. The arts, culture and heritage cannot be an exception in the transformation process, since they were too were overtly affected by the mal-distribution of skills, resources and infrastructure during the apartheid era.

The policy framework sets out the funding arrangements and institutional framework for the creation, promotion and protection of South African arts, culture and heritage. It is inspired by the best traditions of democratic societies, where these features are valued in themselves and are treasured for their contribution to the quality of life.

The Inanda Heritage Route comprises a place with significant tangible and intangible heritage, including buildings, structures, graves, living heritage and collections. It has high significance at all levels for its historical, aesthetic, scientific and cultural/social values. It possesses uncommon, rare or endangered aspects of cultural heritage, including structures and landscapes.

The main objective is the local economic empowerment through offering World-class, heritage –driven tourism experiences unique to the Inanda Heritage Route. Although tourism development in Inanda has focused on heritage and spiritual products in identified anchor historic and heritage nodes, the destination as a whole is in fact one of the largest townships in South Africa.

Also, is remarkable the aim of this policy and legislative framework in promoting arts, culture, heritage and literature in their own right, as significant and valuable areas of social and human endeavor in themselves.

Some specific goals of the project concern the infrastructure development, securing the heritage status, the enterprise development, investment, marketing and branding, safety and security, and the integration of IHR with 1000 Hills Route and strategic nodes, such as Umhlanga.

THE POLICY FRAMEWORK SETS OUT THE FUNDING ARRANGEMENTS AND INSTITUTIONAL FRAMEWORK FOR THE CREATION, PROMOTION AND PROTECTION OF SOUTH AFRICAN ARTS, CULTURE AND HERITAGE.

Among others, the following main actions have been carried out :infrastructure upgrades on Heritage sites, interpretations Centers developed at Heritage Sites, landscape upgrade; re-branding of route to be experiential rather than limited to heritage (open up significant opportunities, increased demand); aggressive marketing of the Heritage Route through print and electronic media to also include Nature based products; and opportunities to engage with locals (NGO, home visits, cultural groups, crafters, restaurants, markets…

The insufficient funding for long term development of the Route, the land legal arrangements around private ownership of heritage sites, the constraints in financing by municipality of improvements on private land, are some of the obstacles faced.

The Durban Tourism Unit of EThekwini Municipality support the The Inanda Community Tourism Bureau (ICTB), which act as the destination’s promotion and marketing agency. It also represents local individuals and businesses participating on the Inanda Heritage Route. It promotes entrepreneurship, local enterprise development and business linkage opportunities associated with the route, and act as a steering committee for the development of the destination and is involved in policy formulation and project oversight functions to government and private sector interventions.

THE INANDA HERITAGE ROUTE GAVE THE CITY AN OPPORTUNITY TO HARNESS THE VALUE OF HERITAGE AND CULTURAL ASSET, AND BY DOING SO PROVIDED NEW OPPORTUNITIES FOR THE COMMUNITY TO IMPROVE THEIR QUALITY OF LIFE AND ECONOMIC CONDITIONS.

The entire city of Durban is a beneficiary of its value, culture and Heritage. From a local perspective the local communities in the Greater Inanada, Ntuzuma and KwaMashu area have benefitted from the project.

Specifically, benefited from the injection of capital funding to provide proper infrastructure so that the Heritage Route can be easily accessible to the general public and therefore the surrounding community enjoys the added benefit of additional funds being earmarked for projects in the area.

The Inanda Heritage Route has given the city an opportunity to harness the value of heritage and cultural asset and in doing so provide opportunities for a community to improve their quality of life and economic conditions. The Route traverses some of the poorest communities in the city of Durban. Its development acknowledges the leaders of the struggle against apartheid. The Inanda Tourism Route is one of the pinnacle natural, and cultural tourism opportunities in the City of Durban.

The Inanda Heritage Route explores the often overlooked area on Inanda, north of Durban. This region has historical roots that run deep, as a place that experienced first-hand the injustices of apartheid, was the home of passive resistance and became an icon of the freedom struggle. It takes in some of the most important, albeit little-known, historical sites. Winding its way through the Inanda Valley, it provides a snapshot of critical South African history as well as, perhaps surprisingly, India's past.

The Inanda Heritage Route is part of a much wider bouquet of tourism opportunities offered by the city of Durban. It plays a huge role in the Province’s tourism strategy and the roll out of a bigger planning and implementation of a 'Zulu Heritage and Cultural Trail', eventually 'meandering' throughout the whole province, thereby linking together the diversity and variety of heritage and cultural tourism sites.

THE PROJECT ESTABILSHED ECONOMIC DEVELOPMENT AS ONE OF THE KEY ASPECTS THAT HAVE TO TRANSFORM THE TOURISM INDUSTRY.

The City continued with the management and maintenances of the upgraded heritage sites and new developments such as the Interpretation Centres. To further enhance product development the City has identified four further major heritage sites for development (for example, Dr Pixley Ka Isaka Seme Homestead or Allison Wessels George Champion House)

Ethekwini was a nominated candidate for the second 'UCLG International Award – Mexico City – Culture 21' (January – May 2016). The awards jury produced a final report in June 2016 and asked the UCLG Committee on Culture to promote this project as a practical example for the implementation of Agenda 21 for Culture. 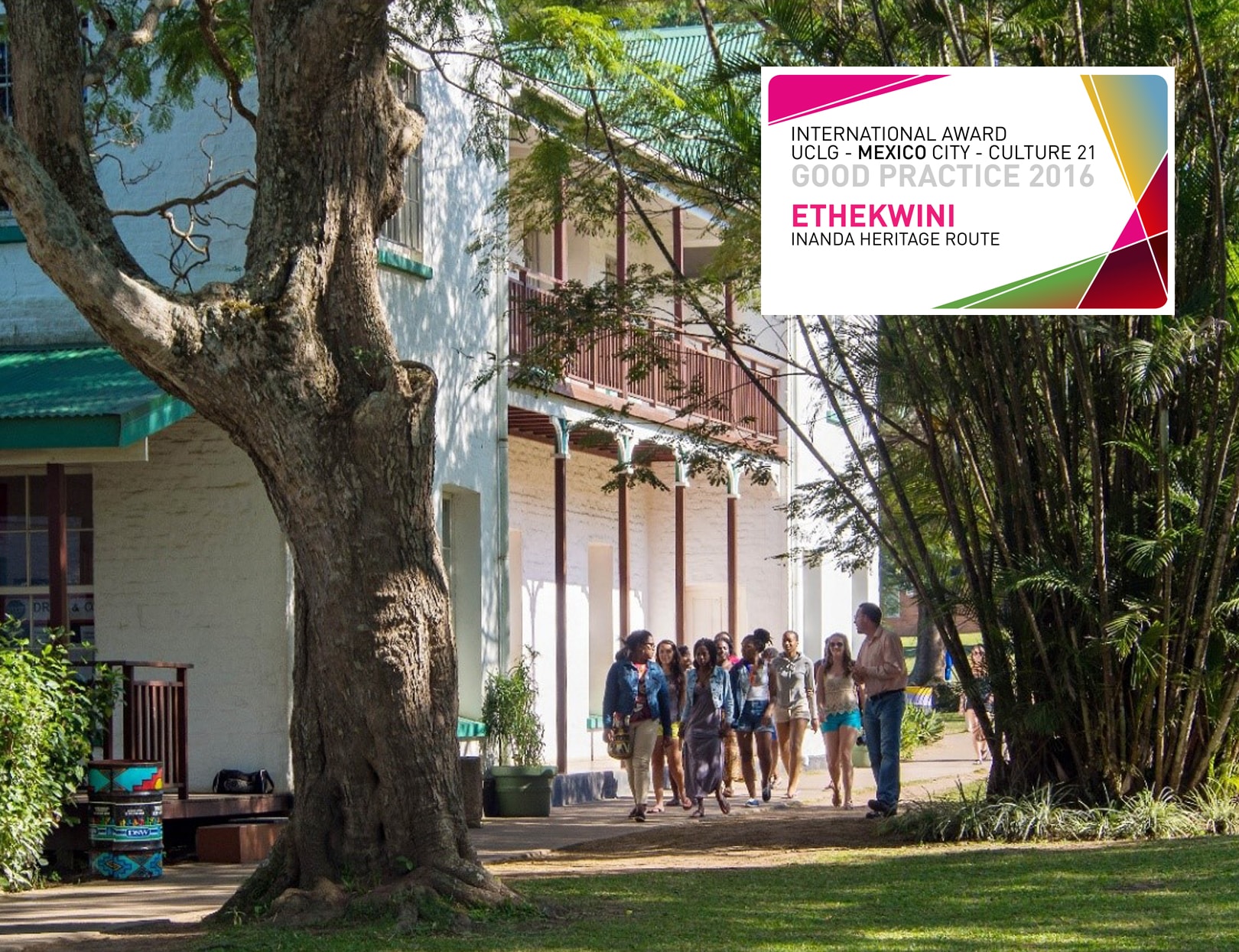