Dublin’s position as Ireland’s capital city and the largest local authority in Ireland is complex. Dublin experienced the economic highs of the Celtic Tiger and the lows of the global downturn. However, its central role in the Irish Economy made it slightly more resilient to these effects, and the first to feel the benefits of the recovery. Ireland’s GDP is ranked as the highest in the Euro area (2015). Major

social change has also taken place, typified by Ireland becoming the first county to approve same sex marriage by popular vote. It is also home for many of the national governmental departments, national and international businesses and national cultural institutions, servicing sports, language, the arts and communities. This central socio-economic position could enable Dublin City Council and the Arts Office, to play significant role in the creation of regional and national policies for sustainable cultural development. In terms of coherence, the priorities and process used for Arts Plan were transferred in the preparations for the Cultural Strategy.

The aim in creating the arts plan was to increase ownership and in doing so, to more closely connect the work of the arts office to a wider public.

Dublin City Council has an overarching Development Plan for the city. This contains all the city council’s agreed objectives, priorities and policies for the coming years. A draft plan is being prepared for 2016 -2022 and will be published in November 2016. The process includes internal departmental and public consultation with citizens, communities and organizations. The Plan also complies with national and regional strategies and includes the high level goals of the Economic and Community Plan. Local cultural policies are formulated in a number of ways: as actions arising from legislation; from the request of the elected representatives of the city council; as a response to a strategic goal of the city council’s development plan; on instruction from the Culture and Amenities Department; or from a section within a city council department, which is recommending a specific course of action. Examples include policies on cultural heritage and conservation, promoting the designation of Dublin as a UNESCO City of Literature, supporting the national cultural institutions, and facilitating the provision of fit-for-purpose, sustainable cultural infrastructure.

From the beginning the Arts Plan has paralleled priorities of Agenda 21 for Culture. In particular, the accord between UCLG and UNESCO was complemented in 2015, when Dublin City Council adopted the UNESCO definition of Culture. While both the Arts Plan and the Cultural Strategy have noted the importance of heritage, creativity, the environment, equality and social inclusion, the two strongest themes are; Heritage, which takes a significant position inside the Development Plan for the city. And; Education, which is one of the strongest stands of work to come out of the Arts Plan.

The main aim is to increase ownership to more closely connect the work of the Arts Office to a wider public. The wide ranging consultation process was key and helped to define the role, future goals, priorities and actions of the Arts Office & the Cultural Strategy. The process enabled the city to maintain and to highlight the interconnected relationship between citizens, arts and culture.

The adoption of the UNESCO definition of culture is a significant change to the traditional interpretation of culture. It engages across all departments in the city council.

The main goals/ priorities of the Arts Plan are:

Public transportation in the consultation process was a primary motivator in its creation; therefore, citizen are designers and beneficiaries of the project.

The Arts Plan is now moving through the 3rd year of execution although in real terms the concept work was undertaken as far back as 2012. Performance and control are now the core phases in operation, and project closure is 2 to 3 years away. It is important to note that the Arts Plan was built for growth and flexibility, and in that context many changes are, and will take place.

Many of the obstacles that the plan encountered were anticipated, including the need to increase resources and training. Some of them are: maintaining autonomy and sharing concept and responsibility in new partnerships, the changing context of a resurgent economy and the critical loss of artist studios or delivering the service during a time of rapid innovation and a need to digitalize service. Finally, other obstacles related with management and negotiation. Disengaging with projects which have a history in the city but do not fit into the Arts Plan, or are ineffective in terms of resource allocation and outcome.

The growth of all types of partnerships in the Arts Plan running in tandem with new policy actions display a unity in planning and policy that is continuing to grow. The direct and indirect effects of the plan on the Cultural Strategy and the City Development Plan have changed the way arts and culture are understood by artist, professional and citizen. The Arts Plan has achieved more than was set out in 2014. As important will be a growing a focus on sustainable cultural development, sharing of knowledge and a greater focus on European programmes, all of which will enable the city to strengthen the local implementation of Agenda 21 for Culture.

Both the arts plan and the cultural strategy have noted the importance of heritage, creativity, environment, equality and social inclusion.

The Arts Plan, its collaboration between the City Council and citizens, and the consultation process would be the core mechanism for the creation of the plan. Collaborations also focus on delivery and include;

While the Arts Plan was not developed in direct collaboration with other levels of government, a range of local government acts and guidelines identify the responsibilities that local authorities have in serving the public. Article 3 The Arts Act, 2003 requires that a local authority stimulates public interest and promotes knowledge, appreciation and good practice in the arts. Also the Arts Plan is informed by the priorities of the Arts Council and the Department of Arts, Heritage and the Gaeltacht.

The Arts Plan changed the way the Arts Office engages with other departments: several interdepartmental partnerships have arisen with; the Area Offices, Libraries, Planning, Events, Tourism and Sports and the Intercultural Unit who have previously engaged with Agenda 21. These changes in relationships are in large part based on the exchange and sharing of knowledge, resources and networking aimed at increasing opportunities and enhancing projects for mutual benefit.

There is an increase in partnerships and sharing of working practice with external organisations such as Failte Ireland (tourism) or Dublin Docklands Development. Cultural institutions and organisations across the region are working together and developing projects targeted at increased participation. Dublin City Council has become a lead agent in these partnerships and networks.

The arts plan was designed to be reactive to context, and flexible enough to adapt and review its progress.

The impact on cultural rights and access to Culture is more subtle, but potentially deeper; the adoption of the UNESCO definition of Culture is a significant change to the traditional interpretation of Culture. It engages across all departments in the City Council, and therefore with a much wider citizenry. Also, the adoption of the UNESCO Cultural Rights of the Child Charter speaks to a wider platform concerning cultural rights for all.

The Arts Plan was designed to be reactive to context, and flexible enough to adapt and review its progress. The Arts Office, and by inference the Arts Plan, is currently being evaluated by a panel of external experts. In tandem with this, the Arts Office is conducting quarterly reviews of the plan, evaluating progress and, as part of the implementation of the plan, an annual conference will be undertaken with all stakeholders. A re-engagement with the public, along the lines of the original consultation process, has not been tabled at present but could prove beneficial.

The plan can be seen in a simplified way as the continuity of the City Council’s obligations under the Arts Act 2003, and as such the emergence of another plan will continue to be a responsibility of the City Council. The commitment to the legacy of the bid for ECoC 2020, the creation of the Cultural Strategy & the additions to the Development Plan, alongside the four year rolling plan of investment in culture and the development of a European Funding Unit, make it clear that at least for the next four years, an unequivocal commitment to the goals outlined in the plan have been made.

The city of Dublin was a nominated candidate for the second 'UCLG International Award – Mexico City – Culture 21' (January – May 2016). The awards jury produced a final report in June 2016 and asked the UCLG Committee on Culture to promote this project as a practical example for the implementation of Agenda 21 for Culture.

This factsheet was put together by Jim Doyle, Arts Officer, Dublin City Council. 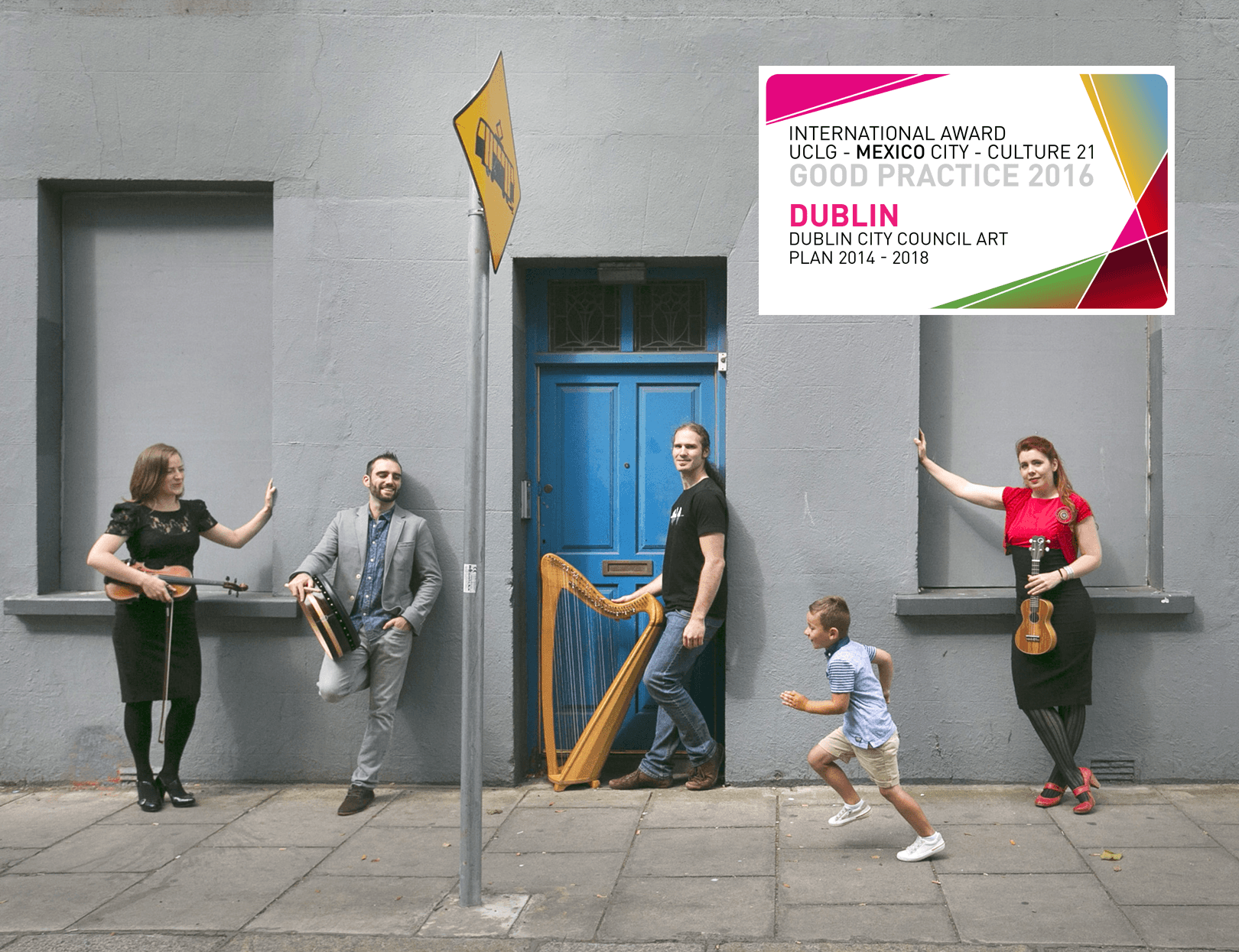