Belo Horizonte is the capital of the State of Minas Gerais in Brazil. Over the years, the city has attracted residents from other regions, which has created a significant mix of different cultures. The city was structured around concentrating more purchasing power in the most central regions, pushing the working class to the periphery. This historical precedent created vulnerable populations, which has deeply affected access to systems and opportunities, including cultural consumption and production.

Descentra began in 2014. At that time a Municipal Fund for Culture did exist. However, the fund did not have a decentralized distribution mechanism. This resulted a concentration of resources that was controlled by a small number of cultural stakeholders, and therefore led to the exclusion of cultural initiatives from the city’s peripheral regions.

Descentra has been held every year since 2014 with the aim of democratizing access to municipal mechanisms for cultural promotion and expanding participation by artists, agents, collectives, and cultural groups from all of the regions of Belo Horizonte.

Descentra was created by the Municipal Department of Culture as an alternative for cultural entrepreneurs that have less institutional capacity to present their work and receive subsidies. Access to municipal resources for peripheral stakeholders helps by reducing inequality, increasing the city’s cultural and productive diversity, supporting a broader network of products and services, and promotes social partnerships through actions in schools, suburbs, cultural centres, and public spaces.

Descentra has been held every year since 2014 with the aim of democratizing access to municipal mechanisms for cultural promotion and expanding participation by artists, agents, collectives, and cultural groups from all of the regions of Belo Horizonte. A call for proposals encourages the participation of individual entrepreneurs in the
following arts and culture areas: visual, audiovisual, circus, dance, intangible/cultural identity heritage, literature, music, tangible/memory, theatre, and multi-sector.

The project aims to continue to serve as a successful experience for the decentralized promotion of culture in Belo Horizonte and other cities.

Descentra involves establishing methods of enabling access to municipal cultural promotion funds for disadvantaged populations and minorities. To this end, the program pays special attention to cultural entrepreneurs in vulnerable areas, which were identified in a study on the neighbourhoods and regions with the largest socio-economic
constraints.

The rules around public tender notices for the distribution of the fund’s resources favour projects in these regions. The aim of this approach is to open up the field of cultural production to artists from these zones.

Project must meet at least one of the established criteria, which include: valuing children's and senior's culture; contributing to the city's artistic and cultural development, the inclusion of people with disabilities; supporting the artistic and cultural content of black, indigenous, Romani and LGBTQ+ people; and gender equality, among others.

Each year, the public tender notice allocates a large amount of resources from the Municipal Fund for Culture to several selected projects that meet the tender conditions. Projects must meet at least one of the established criteria, which include: valuing children’s and senior’s culture; contributing to the city’s artistic and cultural development; the inclusion of people with disabilities; supporting the artistic and cultural content of Black, Indigenous, Romani, and LGBTQ+ people; and gender equality, among others.1

Descentra carries out the following actions:

In an effort to undertake the challenge of training cultural entrepreneurs, and thus create projects of this nature, the Culture Caravans were held, events in which stakeholders from the Municipal Department of Culture visit regions of the city that have applied to Descentra and promote the development of their projects.

Descentra’s initiative is almost entirely in the hands of the City Council of Belo Horizonte, under the coordination of the Municipal Department of Culture (SMC), which also collaborates with other agencies. In order to host the Culture Caravans, the SMC and PBH count on the support and use of cultural centres throughout the city.

Descentra has contributed to the democratization of cultural policies in the municipality, and created a more efficient and extensive use of resources. It offers an alternative to promoting culture and attracting new projects that would otherwise have difficulty accessing other subsidy programs. In addition, it promotes the modernization and improvement of other municipal culture-related calls for proposals.

The City Council of Belo Horizonte has also lent greater visibility to peripheral stakeholders, underscoring their importance, and promoting community partnerships. The opportunities created by this program for the dissemination of cultural initiatives have enriched the sector across the city and encouraged creation in other cultural sectors.

Descentra has also set a benchmark for other areas of public administration, such as the development of road maps for the creative economy in more vulnerable regions.

Finally, it should be noted that the inhabitants of the peripheral regions tend to face difficulties around cultural and economic integration, both for accessibility and self-worth. Increasing support and visibility of decentralized cultural projects made the outlying populations into the central focus of related initiatives, thereby improving their
chances for success, growth, profits, confidence, and creativity.

In 2018, 76.5% of entrepreneurs were new creators and people who had previously never been approved for financial support through public funding programs, with 82% of Black or Brown people of colour entrepreneurs and 51% women2. In addition, 38% of the resources were allocated to the Barreiro region, one of the most vulnerable in the city.

Increasing support and visibility of decentralized cultural projects made the outlying populations into the central focus of related initiatives, thereby improving their chances for success, growth, profits, confidence, and creativity.

Statistical studies have been carried out on all the results of the public tender calls; registered, approved, and subsidized projects. Furthermore, demographic and qualitative studies were performed to highlight the impacts of resource distribution on projects led by Black and Brown people of colour, women, and members of the LGBTQ+ community.3

Progress toward the decentralization of cultural incentives is constantly measured to certify that resources are distributed to the most socio-economically vulnerable cultural areas and entrepreneurs.

The allocation of cultural resources is considered complete when grant recipients become entrepreneurs in their respective vulnerable areas. The success of decentralization is also based on the distribution of projects across all regions, as well as any other positive effects from the clear broader participation of the most vulnerable groups. All of these have been studied by the Municipal Department of Culture.

The goal is also to structure future calls for tender, with improvements to the process and a broader impact.

After a hiatus, Descentra was revived in 2017 in order to ensure a better allocation of resources from the Municipal Fund for Culture. This improved grant system is also part of the various mechanisms for the evaluation and measurement of results, verifiable partnerships, responsibilities, and all selection criteria for the projects being
considered.

Descentra 2019 was considered a success, and as a result, more resources were planned for 2020 to continue to expand the project.

Belo Horizonte was a candidate for the fourth UCLG Mexico City – Culture 21 International Award (November 2019 – May 2020). The jury for the award drew up its final report in June of 2020, and requested that the UCLG Committee on Culture promote this project as one of the good practices implemented under Agenda 21 for culture.
This article is written by Hugo Salomão França, Director of International Relations, Belo Horizonte, Brazil.

1  Terms strictly adhered to, as outlined in the original application.

2  Terms strictly adhered to, as outlined in the original application.

3  Terms strictly adhered to, as outlined in the original application. 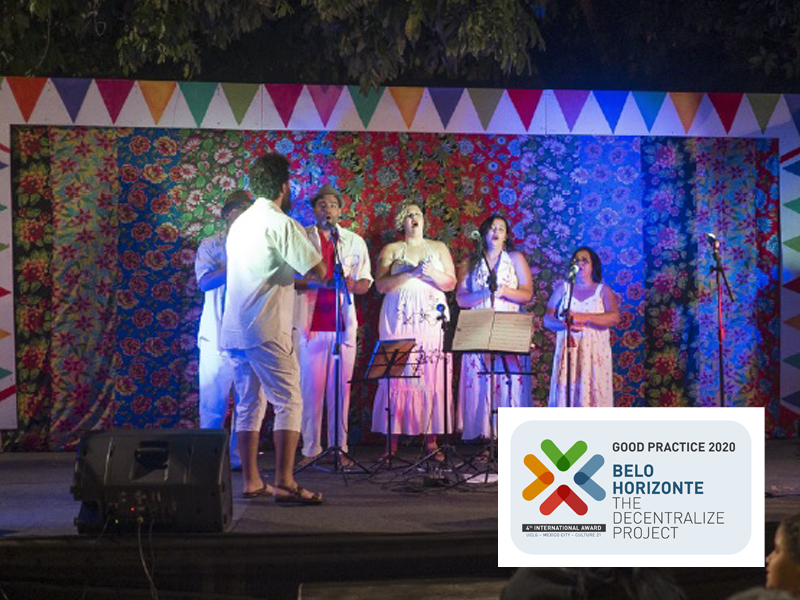