Curitiba is the capital of Paraná and one of the largest cities in Brazil in terms of its population and economy. In its growth from town to metropolis, the city's fundamental characteristic has been its influx of European, Asian, and African immigrants. In addition there has been migration from a number of areas around the country, such as Rio Grande do Sul, Minas Gerais, São Paulo, and the northeast. All of these groups help to create the city's identity, while growing the population and forming its economic, social, and cultural base.

Curitiba is the core of the Metropolitan Region of the same name, comprised of 29 municipalities and over 3 million residents. The city's influence over the population and regional development requires municipal public policies to take a metropolitan approach. Curitiba now faces the same challenge that all large metropolises do, where urban issues are reconsidered using a humanist approach, in which cities are primarily for those who live in them.

The 2013 - 2016 Government Plan by the Municipality of Curitiba reinforced a strategic, participatory, territorial, and intersectoral approach. It was built around four areas of action: Social development, Economic development, Urban and environmental development, as well as Participatory governance.

The main objective of the project is to build a municipal system for participation and social control.

The adherence to the National System of Culture, the strengthening and empowering of the Municipal Council of Culture were all treated as priority areas. Through them, a series of strategies emerged that were focused on rapprochement and dialogue with cultural actors and the general population. These became a reality through annual cultural conferences and preconferences, classroom-style talks, public consultations and hearings, and many others.

The programme has helped to construct new environments to practice citizenship, as well as to overcome the challenges that result from differing interests between social actors. Participation in the development, implementation, and evaluation of cultural public policies has ensured assertiveness in carrying out actions and the proper use of public resources. This has promoted a shared responsibility among different sectors of society through sustainable, democratic, and inclusive practices.

The cultural sphere is fundamental for the development of society and for the exercise of citizenship. Patterns in public policies have shown that social changes will occur in the same proportion as in the cultural sector.

Public policy for culture implemented in Curitiba since 2013 is directly related to Agenda 21 for culture, as they were developed in accordance with the latter's principles and commitments. It is comprised of actions that look to create universal access to culture by tackling inequalities in access, as well as involving spatial, economic, and intellectual aspects. Meanwhile, some initiatives emphasise the value of cultural diversity and the recognition of traditional and popular cultures. Others focus on the conservation and promotion of tangible and intangible cultural heritage. These are vital for the preservation of citizens' collective memory, culture, and group emotions. There are also initiatives aimed at strengthening the economic chain of culture and youth involvement. All of these are in place on top of inclusive cultural actions of solidarity that honour human diversity.

Citizen participation and social control help form a cross-cutting programme that is embedded in the city's cultural policies. The programme addresses the underlying principle that, “cultural development in a municipality be supported by social actors. The principles of good governance include transparency of information and citizens' participation in developing cultural policies, in decision-making processes, as well as in evaluating programmes and projects." Accordingly, the city's scheduled actions conform to the commitment to, "implement the appropriate instruments for guaranteeing the democratic participation of citizens in developing, executing, and evaluating cultural public policies."

To build a municipal system for participation and social control through:

Participation in the development, implementation, and evaluation of cultural public policies has ensured assertiveness in carrying out actions and the proper use of public resources. This has promoted a shared responsibility among different sectors of society through sustainable, democratic, and inclusive practices.

Carrying out a programme that envisions citizen participation in the development, implementation, and evaluation of cultural public policy would be impossible without support from different institutions as well as public and private entities. These include NGOs, professional and community associations, and many more. In fact, help came in the form of spaces, people, and outreach, with ongoing training, consulting, representation, and technical cooperation, among others.

Collaboration was facilitated through the Ministry of Culture and a partnership with the State Secretary for Culture. Together, they seek to share knowledge and information, which is essential for genuine social participation. Curitiba has played a leading role in pursuing metropolitan integration that aims to strengthen cultural public policies, by using the exchange of experiences as a guideline for helping to ensure civic involvement.

This benefits the entire population while also contributing to the improvement of cultural public policies through other means such as public consultations and hearings, as well as cultural conferences, on securing municipal funding.

Patterns in public policies have shown that social changes will occur in the same proportion as in the cultural sector.

The actions instituted by the programme inherently involved breaking historical habits, whose actions once excluded most cultural actors from decision-making processes, and returned such privileges to certain cultural groups. It democratized opportunities for participation in processes of development, execution, and evaluation of actions insofar as the project established a norm for listening and being sensitive to the population's wishes and cultural practices.

Involvement in creating cultural public policy made it possible to redefine practices that were outdated and not suited to public expectations. Cultural programmes help to prioritise actions that meet the needs and desires of areas across the city. They also lend importance to popular cultural activities in these communities. Projects like this also include designing regionalised legislation that grants support to local cultural actions, thereby boosting production and more widespread visibility.

By mobilising the population to take control of cultural policies, the programme has awakened citizens. This is critical for the ongoing engagement and public cooperation necessary in other areas and spheres of governance. The interface between participation systems and control over various public policies has promoted a dialogue on social grievances, while also avoiding overlap in actions.

The project is working to construct specific mechanisms for evaluation. A working group has analysed tools used for similar programmes in order to determine the most apt solution. Up until now, the programme's success has been determined by a quantifiable increase in both the number of available instruments and the number of participants. Currently, there is a subjective evaluation for the level of participation, which is based on technical qualifications and political representation.

It democratized opportunities for participation in processes of development, execution, and evaluation of actions insofar as the project established a norm for listening and being sensitive ot the population's wishes and cultural practices.

One of the first actions taken by the programme was to join the National System of Culture (SNC). The SNC's main premise is to guarantee continuity for public policies through the institutionalisation of social participation. Without this, the federal body cannot ensure access to resource transfer mechanisms. Adherence to such principles is a strategy to aid in the programme's continuity. Empowering different government bodies, namely, the Municipal Council of Culture in addition to the achievements made by cultural stakeholders and society representatives, has made it nearly impossible to stop this process.

The City of Curitiba was a candidate for the second "UCLG Mexico City – Culture 21 International Award" (January – May of 2016). The jury for the award drew up its final report in June of 2016, and requested that the Committee on Culture promote this project as one of the good practices to be implemented through Agenda 21 for culture.

This article was written by Marcos Cordiolli, President of the Curitiba Cultural Foundation, Curitiba, Brazil. 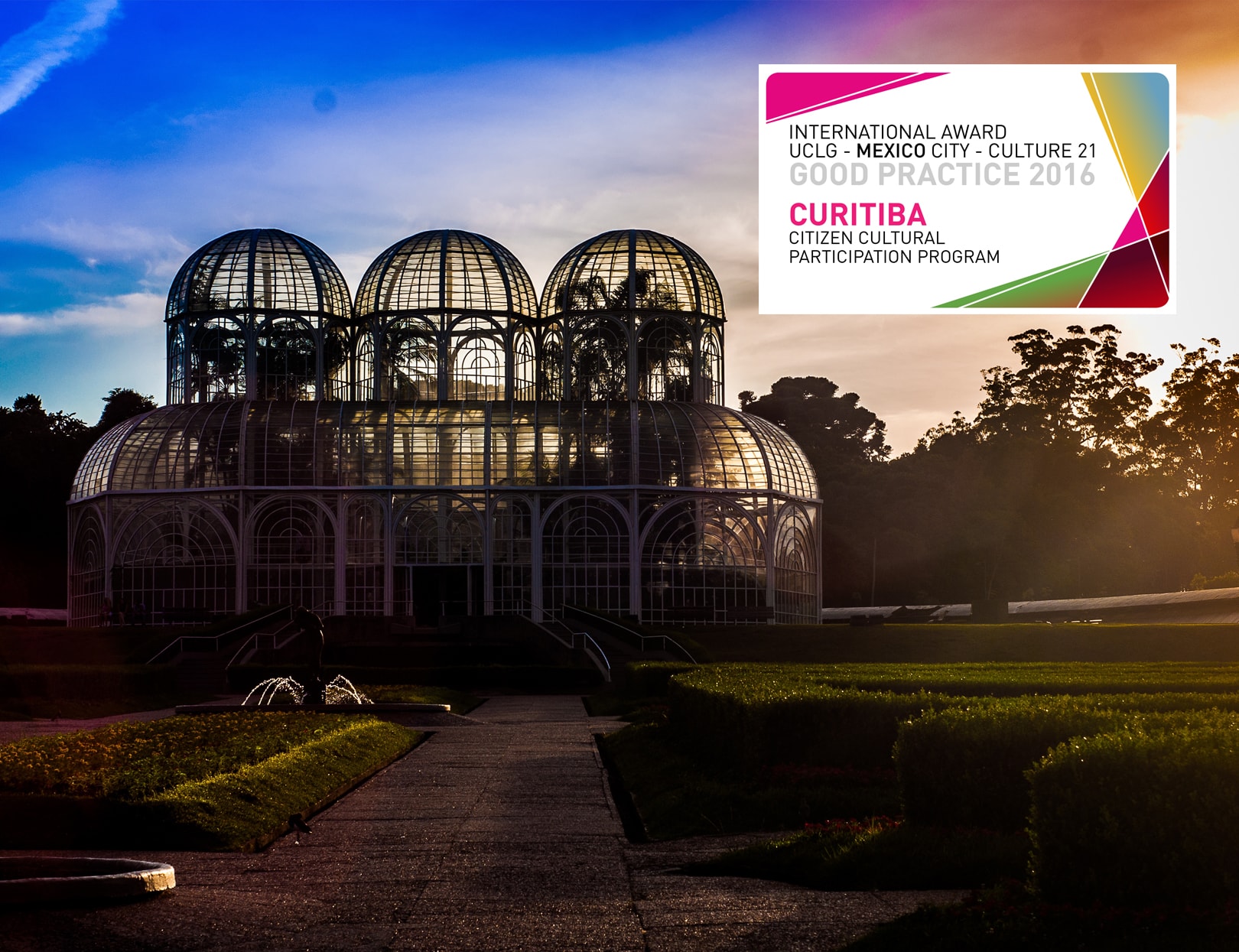