Culture, gastronomy and sustainability in Floriánopolis

Florianópolis is the capital of the state of Santa Catarina in the south of Brazil. An international tourist destination, the island and small part of the continent boast over 100 unique beaches that attract half a million visitors every year. The local population is 421,000, and there are almost one million people in the entire metropolitan area. Florianópolis is home to universities, public institutions, commercial business, and service enterprises. The local economy is primarily driven by trade, tourism, and the tech industry.

It is in this context, that the gastronomy of Florianópolis has been characterised by its ability to establish harmony between tradition and diversity. Local restaurants emphasise and preserve cultural expressions, use local ingredients from the region, and maintain some historic, albeit colonialist, practices. Simultaneously, new chefs who have trained at culinary schools promote the reinterpretation of regional cooking by promoting contemporary cuisine with endogenous cultural elements. The project helps to make culture tangible through initiatives by the creative economy that address culture, craftsmanship, design, and gastronomy. It will also help to lend visibility to the city's culture on a national and international level.

THE MAIN OBJECTIVE IS TO STRENGTHEN CULTURE THROUGH GASTRONOMY, ESTABLISHING A LINK BETWEEN AGENDA 21, THE CULTURAL IDENTITY OF FLORIANÓPOLIS, AND SUSTAINABLE DEVELOPMENT.

The initiative is part of the Florianópolis Municipal Culture Plan which has established, regulated, and directed the implementation of the city's public policies for ten years. It is one of the key components in setting up the Municipal Culture System. This is the result of a participative process that aligns with the regulations set by the Ministry of Culture and Agenda 21 for culture (A21C).

The project is connected to A21C because it proposes cultural development through cooperation among actors that make up the sphere. These include government, civil society organisations, universities, and the private sector in an effort to fortify innovation and creativity. The aim is to do so through a process open to: local community interaction, the appreciation of cultural traditions, memory, the use of knowledge and practices, the development of gastronomy as an intangible asset, strengthening cultural and gastronomic tourism, innovations in gastronomy-related tourism, and the use of the art of gastronomy as an element in cultural identity.

In a globalised world, feeding a population has come to mean going against the use of local products. This projects seeks to improve the services, products, recipes, or ingredients historically defined by the geographical area, as well as to improve both natural soil or climate factors and human factors including tradition and culture. The aim is to revive these methods and products and turn them into a competitive advantage.

The main objective is to strengthen culture through gastronomy, establishing a link between A21C, the cultural identity of Florianópolis, and sustainable development.

There are a number of organisations connected with the project, including cultural associations, universities, restaurants and bars, unions, and many more.

In general, the entire population of Florianópolis will benefit. Specifically, the cultural production chain will benefit the most. Cultural stakeholders involved in the project participated throughout the entire implementation process.

THE PROJECT HAS PLACED A SPECIAL FOCUS ON THE PROMOTION OF CULTURE WITH A CONSIDERATION FOR INCLUSIVE PROCESSES OF SOCIAL DEVELOPMENT, THE PROMOTION OF CITIZENSHIP, CULTURAL BUSINESSES, AND INCREASING CITIZENS' SELF-ESTEEM, PARTICULARLY THOSE WHO HAVE BEEN HISTORICALLY EXCLUDED AND SOCIALLY VULNERABLE.

The project helps to achieve the official institutionalisation of culture in the Department of Culture. It has also contributed to ensuring an ongoing Municipal Culture Plan, that won't be vulnerable to administrative inconsistencies.

The project has helped to involve all actors, as well as to spread awareness of the city's cultural landscape. It has also contributed to the development of the cultural economy through guidelines, priorities, measures, and benchmarks using indicators for monitoring.

The project has placed a special focus on the promotion of culture with a consideration for inclusive processes of social development, the promotion of citizenship, cultural businesses, and increasing citizens' self-esteem, particularly those who have been historically excluded and socially vulnerable.

Implementing the Municipal Culture Plan, in line with A21C, will yield positive results in a number of cultural industries, including the production chain for craftsmanship, gastronomy, and tourism. It makes it possible to rescue, recover, and preserve the occupations of ceramicists, lacemakers, fishermen, particularly those in mariculture, traditional communities, and in local cuisine, while still having an impact on income generation and social inclusion.

A committee has been established for evaluating the Municipal Culture Plan which convenes every four years.

THE PROJECT HAS HELPED INVOLVE ALL ACTORS, AS WELL AS SPREAD AWARENESS OF THE CITY'S CULTURAL LANDSCAPE. IT HAS ALSO CONTRIBUTED TO THE DEVELOPMENT OF THE CULTURAL ECONOMY THROUGH GUIDELINES AND PRIORITIES.

The Municipal Culture Plan is projected to last 10 years, and will aid in implementing proposed actions while maintaining its direction and priorities.

The city council of Florianópolis, through the Secretaries of Culture and Tourism, will also seek other sources for project funding whose objectives also align with those of the Municipal Culture Plan. This can be achieved through state, national, and international cultural legislation that promotes the development of the cultural economy and its respective production chain.

The City of Florianópolis was a candidate for the second "UCLG Mexico City – Culture 21 International Award" (January – May of 2016). The jury for the award drew up its final report in June of 2016, and requested that the Committee on Culture promote this project as one of the good practices to be implemented through Agenda 21 for culture. 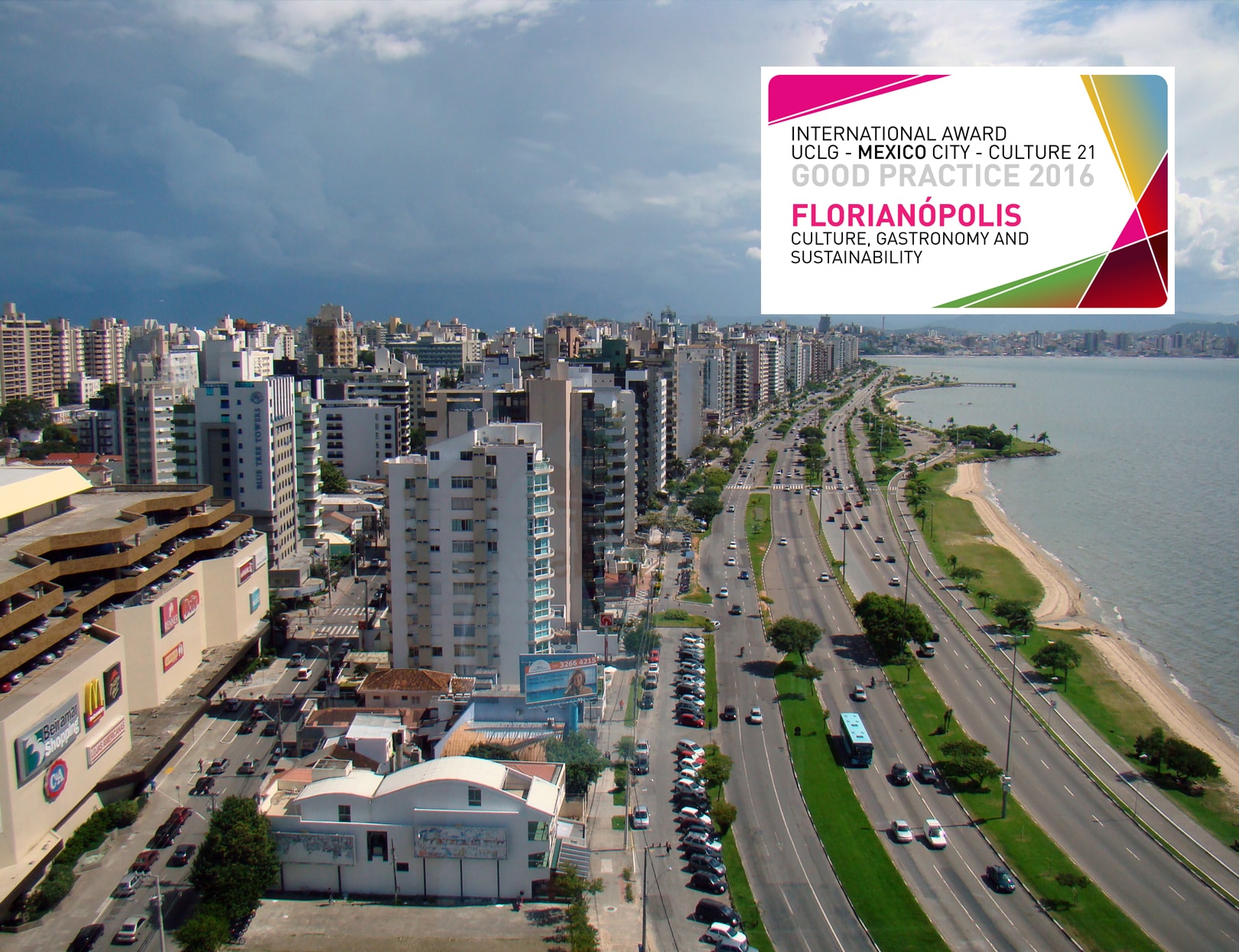