Cultural heritage and reinvigoration of socio-economic activities in Timbuktu

The City of Timbuktu covers an area of 21Km². It contains a protected forest and encompasses the agglomerations of Kabara and Koriom, and is home to 54,453 residents (Songhoï, Tamasheq and Arab, Bozos Somonos Bellas) living in the districts of Abaradjou, Badjindé, Bellafarandi, Hamabangou, Sankoré, Djingareiber, Kabara, Sareikeina and Koiratao. Timbuktu is a meeting point and a cultural and historical crossroads for the exchange of products from the Mediterranean and the South Sahara. Market gardening, livestock farming, fishing, arts and crafts, forest production, and tourism constitute the main economic activities whose development is hindered by the area’s geographic isolation, which increases the poverty of the populations. Having put an end to tourism, which was a main source of activity and revenue, the occupation of Timbuktu by jihadists has made it necessary to reinvigorate socio-economic activities. With the technical and financial support of the International Association of French-speaking Mayors (AIMF), the city hall, in partnership with the State, has decided to back the project for historical heritage built to preserve the cultural assets of Timbuktu, which was listed as a UNESCO world heritage site in 1988. From May 2012 to January 2013, Timbuktu was occupied by armed rebels, who caused significant damage to world heritage sites and massive displacement of communities towards the south of Mali and its neighbouring countries. Municipal services and decentralised administrations were pillaged, and ceased to function. The area’s socio-economic fabric completely collapsed, in turn accentuating poverty. This led to the State of Mali to ask for aid from the international community through UNESCO. Following the international meeting of experts on the preservation of Mali’s cultural heritage organised by UNESCO in Paris in February 2013, a plan of priority actions for rehabilitation and conservation was adopted. One of these actions aimed to bring the area’s socio-economic fabric and income-generating activities back to life.

The main objective of this process was to defend the freedom of individuals and groups to maintain their cultural practices, which the jihadists wished to suppress.

The project was initiated by the city hall with the National Directorate for Cultural Heritage (DNPC) as part of a national programme. The city hall of Timbuktu collaborated with the services of the DNPC to strengthen its own institutional and operational abilities in order to become a central actor in the implementation of this project, carried out in conjunction with the UNESCO office of Bamako. Elsewhere, as one of its members since 2005, the city hall has solicited the support of the AIMF to reinvigorate its socio-economic activities strictly in line with conserving the region’s cultural heritage. The multi-participant process has allowed the city hall to mobilise the populations concerned, not only through professional organisations but also through families. The city hall has benefited from financial resources and technical expertise that it was previously lacking, and has developed its ability to appeal its case in international circles. The collaboration established between the Urban Commune, the implementation leader for the project, the AIMF, assistant to the implementation and a financial partner, and the DNPC, with technical support supervised by UNESCO, therefore shows how indispensable the partnership between the local community and State services is in the implementation of joint sustainable development projects.

In Timbuktu, municipal action in relation to culture is part of a regional strategic development plan and its cultural section. This section focuses mainly on protecting and enhancing the value of the cultural heritage (university of law, Islamic theology and medicine) and on cultural tourism and promotion of arts and crafts (jewellery, leather goods, and construction techniques). Alongside this, a cultural action with a social purpose is being carried out in response to the cultural aspirations of young people: reading, music, leisure activities and information. By focusing on the opportunities created by decentralisation, and considering the fact that culture can play a major role in sustainable development, Timbuktu acknowledges the urgency for investments expressed by communities (local economy and businesses, health, and education). It has therefore adopted a transversal approach to cultural development, in line with other policies. Despite the limited availability of financial and human resources, the city hall is building the infrastructure that will enable local cultural expression, and is collaborating with decentralised technical services and international partners for the actions.

The project has several connections with the Agenda 21 for Culture. First of all, the main objective of this process was to defend the freedom of individuals and groups to maintain their cultural practices, which the jihadists wished to suppress. It also aims to reinvigorate a sector of socio-economic activities based on cultural identity, by rehabilitating the ancient city and by preserving this architectural heritage. Several discussion meetings have been organised with those involved: families, district managers, the masons guild, and cultural associations. The attention given to the fact that the residents of the ancient city have taken on this project, by focusing on community radio stations and district managers, has allowed the residents to be involved in choosing which houses should be renovated. Besides this, the sustainable renovation of traditional houses has also stimulated the use of construction techniques that represent the local identity, and has helped to invigorate heritage-related activity sectors and to generate income for the population.

Culture remains the method of resilience that allows residents to develop new strategies for survival and for harmonious and sustainable cohabitation.

The project’s main aim is to reinvigorate the socio-economic and urban fabric of the city of Timbuktu by renovating damaged houses, creating an arts and crafts map, for arts in particular, and strengthening the institutional and operational capacities of the Timbuktu city hall in terms of the management of cultural heritage. In Timbuktu’s current situation, culture remains the method of resilience that allows residents to develop new strategies for survival and for harmonious and sustainable cohabitation. The specific goals are:

The main actions carried out

The implementation of the project led to the creation of the role of coordinator of cultural heritage renovation activities, for which a cultural agent was recruited. […] this initiative helped to build local expertise in terms of housing management in an unstable and urgent situation.

Timbuktu faced several obstacles during the implementation, for example, the almost complete absence of financial resources, making it necessary to reach out to international financial partners, the lack of specialised personnel, which led the city hall to recruit a cultural agent, and above all, the instability in the region, which made it difficult to have certain orders for materials delivered. Notwithstanding this situation, all the planned actions have been carried out. The expectations of the beneficiaries have been met, and the objectives have been reached. The link created between the built heritage and the development of know-how and of traditional construction techniques helped to unite residents around participatory initiatives for the reappropriation of their living spaces and their cultural expressions. International cooperation strengthened local organisational abilities in terms of cultural resources, and may be further developed in the future. The attention given to young people and to communication favoured intergenerational dialogue, and thus created the conditions to allow the results and investments to last for a long time.

The impact was measured on the basis of the following elements: the number of actions to be carried out, such as recruitment of a cultural agent, follow-up of activities, and purchasing of equipment. This initiative therefore helped to build local expertise in terms of housing management in an unstable and urgent situation, with the creation of the role of coordinator of cultural heritage renovation activities, and the recruitment of a special agent.

Through learning workshops, the project has contributed to the communication of the knowledge and skills of former masons to young masons in the guild, including elements of intangible heritage, such as the rites that used to precede the beginning of work on construction site.

The built cultural heritage has been preserved and reinvigorated thanks to the renovation of around 30 houses, thus benefiting vulnerable families. It has also allowed the involvement of the city hall in a new governance dynamic with the communities, which is cultural in particular, centred on the strong tradition of collaboration held by the region’s pre-existing communities, which has helped it to be resilient and to be rebuilt following the recent traumas. Its implementation has widely contributed to the creation of more jobs for the community.

The project for the renovation of built heritage is part of an overall project aiming to alleviate the highly precarious situations in which certain families found themselves following the crisis. Therefore, in this regard, 32 displaced families, following the damage, were able to benefit from small funds that allowed them to find liveable and decent housing in their neighbourhoods. The selection of beneficiaries focused in particular on responding to the needs of women in need and widows who owned their homes.

Quarterly activity reports and a final project report made the results obtained according to indicators clear. The methodology used to measure the results of the project focuses, on the one hand, on a framework of dialogue between the city hall, technical partners, and the families involved, and on the other hand, on the quarterly activity reports indicating the advantages and difficulties of the project. It centres on a group of objectively verifiable indicators (number of houses renovated, number of studies carried out on the impact of the crisis, number of promotion initiatives, and number of jobs created). The reports have therefore highlighted the renovation of 32 houses instead of the 20 initially planned, the completion of the two studies devoted to the impact of the crisis (one relating to the economic impact and the other to ancient architecture), and a map of Timbuktu’s artisans. Finally, 120 jobs have been created.

The link created between the built heritage and the development of know-how and of traditional construction techniques helped to unite around participatory initiatives for the reappropriation of their living spaces and their cultural expressions.

In order to ensure that this project continues, the city hall, still aided by the DNPC and UNESCO, is active in the creation of a project which will aim to consolidate the relationships between the various activities and projects currently underway in Timbuktu as part of a project supporting urban communities. Moreover, the AIMF plans to support a second renovation phase, on the condition that the Timbuktu city hall can gain some financial support. Finally, Timbuktu plans to make its action long-lasting through a programme of support for arts and professions relating to cultural heritage, as part of a cultural heritage policy rising.

The city of Timbuktu was nominated for the second 'UCLG International Award - Mexico City - Culture 21' (January-May 2016). The awards jury produced a final report in June 2016 and asked the UCLG Committee on Culture to promote this project as a practical example of the implementation of Agenda 21 for Culture, and as a special mention of the second edition of the Award.

This factsheet was put together by Kassim DIAKITE, Project coordinator, Timbuktu, Mali. 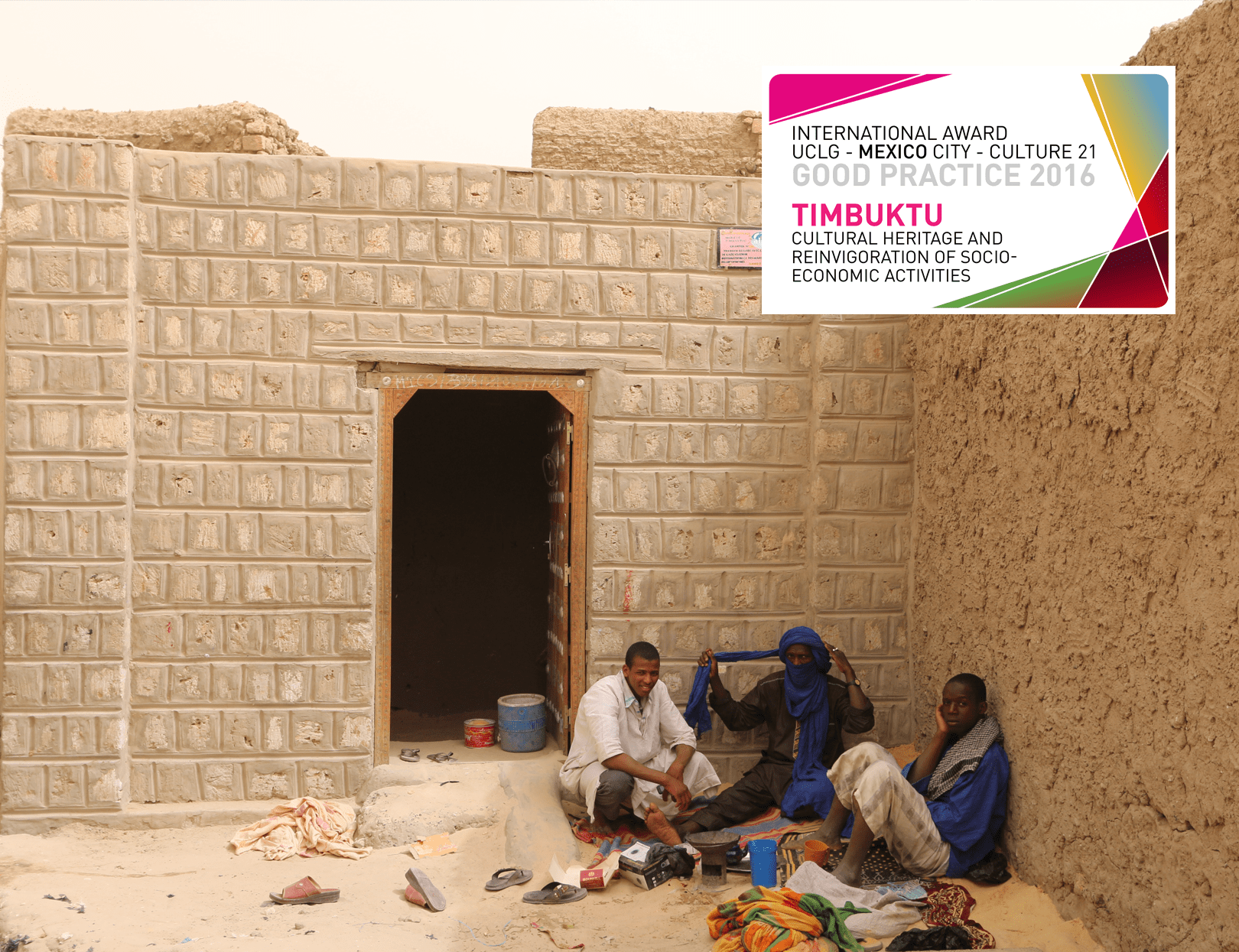