As the European capital, Strasbourg is home to several European institutions like, for example, the European parliament, which has earned it its place on the European Heritage Label list. Strasbourg has developed an exemplary policy in terms of local democracy, European citizenship, culture, heritage, transport, urban services and economy. The Sensitive Urban Zone (ZUS in French) of Hautepierre, is home to 13,862 inhabitants and is one of the youngest neighbourhoods in Europe. It is composed of 78% of social housing, and has an unemployment rate of 19.5% (2004), 39% of the population is living below the low-income threshold and 75% of students is considered disadvantaged. The proportion of foreign students at college is also particularly high (29.3%). This neighbourhood was also included in the '25 neighbourhoods' plan, initiated in 2004 by the Minister of the State and the Minister of the Interior and Town Planning.

Since 2010, the town and urban community of Strasbourg have jointly pursued a policy to promote the digital world, with a view to helping inhabitants use new technology with for example, digital mediation spaces and specific workshops. Shadok is a clear sign of the city's commitment to developing a policy that favours digital technology in all its forms. Managed by the city, this venue is dedicated to experimentation, creation and digital culture; it is a new venue where anyone may discover and test out various uses of digital technology in all their artistic, cultural, economic and social forms.

Depending on how you use it, techniques and technology may either add value on a social democratic or citizen level, or destroy it. Public actors must therefore be careful to make sure they create more value than they destroy. The issue is a clear demonstration of the challenges of the digital divide. Access to and use of digital tools by local residents is only made more difficult by the lack of Multimedia Culture and Public Digital venues.

The project incorporates one of the key aspects of the local policy; access to culture for all, especially young people. In fact, establishing a network of cultural, social and educational partners for this project will help foster encounters between different actors (residents, institutions, artists, associations) in order to carry out long-term projects within a given territory.

The city has adopted various measures, including facilitating access to culture by creating new audiences.

Strasbourg places culture, key to individual freedom and development, as well as being crucial to critical thinking and one of the leading factors of community life, at the heart of its policies. The city has allocated a quarter of its budget to culture, which it considers to be essential to citizenship, in order to ensure that everyone has access to art and culture.

Cultural life in Strasbourg is characterised by a very dense network of cultural facilities within the territory: media libraries, museums, music schools, theatres, performance halls, the new Shadok space (digital factory) and many social and cultural centres. offering a huge range of cultural and educational projects of high artistic quality. The city has an exceptional heritage ('City of Art and History' and 'European heritage' labels), a great number of first-rate cultural actors at regional, national and international level, an outstanding enthusiasm for live performances, establishments that are open to digital culture, artistic and cultural education from a young age and support with amateur practices.

However, it has been found that several cultural facilities are not frequented by the people living in the neighbourhoods they are located in. Similarly, people are not able to circulate easily between the city centre and its outskirts.

As such, the city has adopted various measures, including facilitating access to culture by creating new audiences through a specific 'public development' mission in connection with the Department of Culture. Shadok's FIP project (Create, Invent, Share in the digital age) demonstrates the commitment towards its Agenda 21 for Culture:

The action plan is divided into 3 focus areas:

Strasbourg places culture, key to individual freedom and development, as well as being crucial to critical thinking and one of the leading factors of cummunity life, at the heart of its policies.

The implementation of an online platform, which is shared with the partners, will showcase creations made by young participants and ensure the durability of this action for years to come.

Young people aged 14-25 are the target audience for this project; the programme tends to seek a balance between 'captive' audiences (college students and school drop-outs identified by community employment aid projects) and 'non-captive' audiences during outdoor actions. The beneficiaries have been able to discover new tools and practice using new skills. Some have also benefited from visits outside the neighbourhood, therefore encouraging a greater appreciation of the city and its facilities. Parts of the project have also seen commitment from non-target audiences (parents, young children). To date, the project has reached 2,000 beneficiaries.

The city of Strasbourg and the culture department's public interest project has evaluated best practices and will be able to make future use of the tools implemented by this project.

Impacts on culture and on its local cultural actors

Implementation of a skills network that brings together the city's officials and culture department.

Impacts on the territory and its population

The networking of various structures that have never previously collaborated has helped enhance digital mediation skills among institutions and organisations in the field. The many partners involved have given young people aged 14-25 from various backgrounds the chance to discover and learn digital cultural practices in a sustainable way.

In terms of transversal impacts, a growing number of partners and audiences are becoming involved in the project, especially those older than the initial target age group. As a result of the project, middle school students in the territory are now benefiting from induction workshops within companies and organisations working in digital culture. The flexibility and responsiveness of partners has also helped implement additional actions, which have been directly initiated by diverse audiences.

A sociologist has been tasked with monitoring all the actions and their implementation with partners, as well as their introduction to audiences. Four CET (Training and Technology Centre) Masters students from the University of Strasbourg were also selected to capitalize on teaching methods deployed in different actions. The Ministry of City Development, Youth and Sports, was also selected to have an evaluation carried out by an external body. The varied data should produce a complex evaluation on different levels. Thus, once the outcomes have been assessed, it should be possible to roll out a widespread methodology for use in other territories. Steering committees and conferences with stakeholders, funding partners and players will also gradually be organised alongside the project for monitoring and re-adjustment purposes.

The city has allocated a quarter of its budget to culture, which it considers to be essential to citizenship.

The FIP project tends to roll out to other areas; the Port-du-Rhin neighbourhood, which is undergoing great changes, is expected to adopt a similar project. Therefore, a networking of partners will begin in order to write up a joint programme of actions for and with young people. The assessment and transmission of data regarding the running of the project will also be continued locally with actors in the field and at international level.

The City of Strasbourg was a nominated candidate for the second 'UCLG International Award – Mexico City – Culture 21' (January-May 2016). The awards jury produced a final report in June 2016 and asked the UCLG Committee on Culture to promote this project as a good practice of the implementation of Agenda 21 for Culture.

This factsheet was put together by Nawel RAFIK-ELMRINI, Deputy-Mayor, European and International Relations, and Géraldine FARAGE, Responsible for the Shadok, Strasbourg, France. 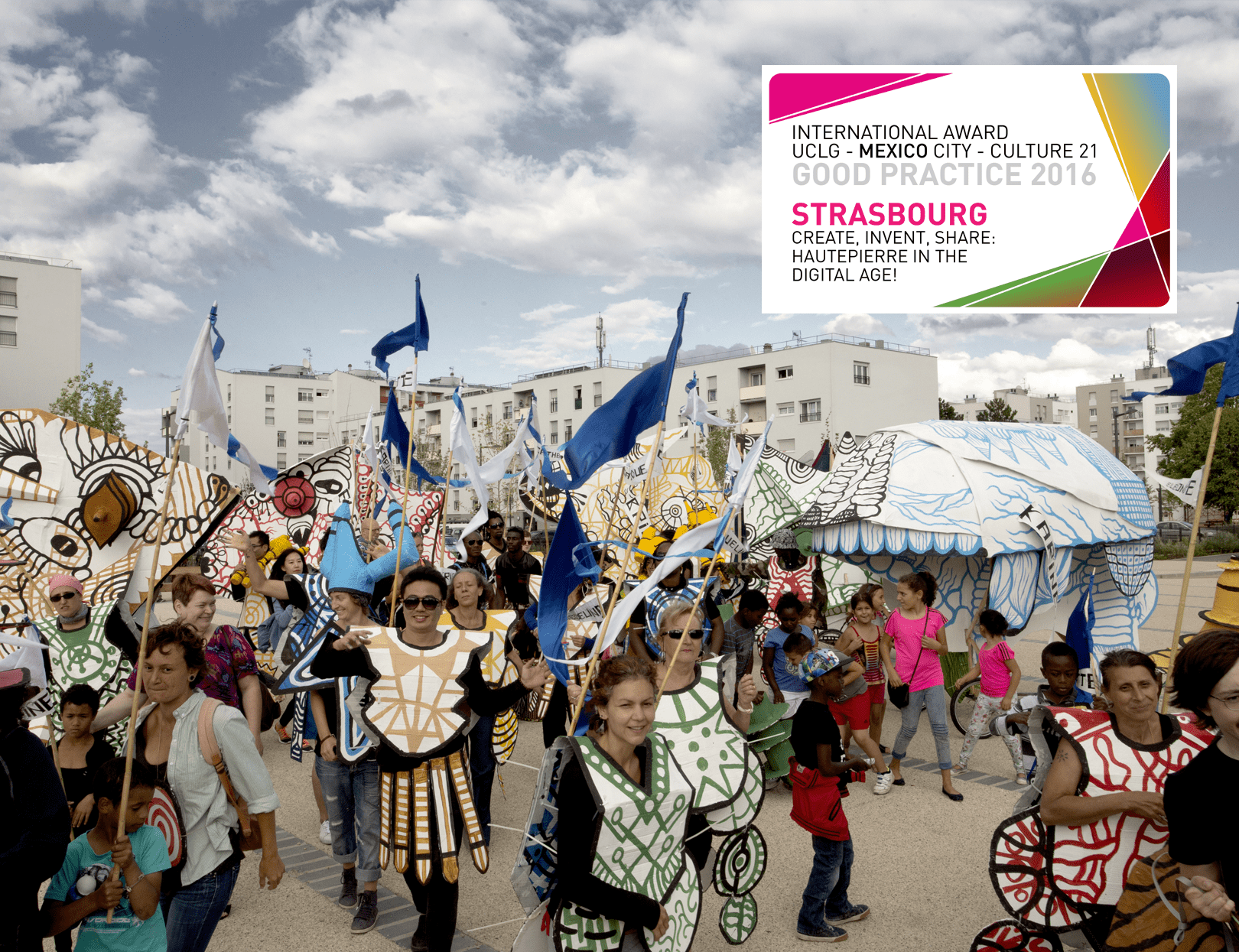