During the 1990s, the City Council of Belo Horizonte started a process of democratisation of cultural policies in the municipality. Among other campaigns, the Government invested in a participatory way to implement the budget resources of the city, called Participatory Budgeting (Orçamento Participativo). Through this program, the various communities of the city could, after 20 years of military dictatorship, interfere effectively in Municipal Public Policies, thus sharing responsibility with the civil society.

As a direct result of this process, a series of cultural spaces were implemented throughout the city regions. The choice, made by the region’s community, made the acquaintance of residents with the cultural spaces easier. They aimed at the opportunity to create a unique space for cultural activities in suburban areas. Before, those activities were gathered only in the wealthier Mid-Southern and Pampulha regions. Such implementation allowed for the consolidation of the city's cultural policy focused on full access to cultural rights and in fostering artistic practices and usufruct at various areas of the city.

The municipality's cultural centres are literally living creative spaces, which people can access daily and regularly.

To understand the distribution of the Cultural Centres in Belo Horizonte, it is worth noting that the municipality is divided into nine administrative regions, and the Cultural Centres are distributed in those, according to Appendix 01 of this document. Hence the understanding that the implementation of cultural centres in Belo Horizonte has been an effective policy of regionalisation, more so than the concept of decentralisation, used widely in the universe of cultural policies, simply because we can no longer think of ‘centre’ without assuming semantically its opposite, the ‘periphery’, as pointed out by HANNERZ (1997, p. 13) "The new global organisation of culture cannot be understood in terms of existing centre-periphery models, even in those models which admit multiple centres and peripheries". In terms of discourse, the idea is feasible, although, in practice, we still have the whole of society and institutions themselves acting on the prospect of exclusion. The option of regionalisation, chosen by Belo Horizonte City Council, can thus be understood as a didactic action for a new understanding of the relationship between the various areas of the urban space. From the experience of the city, we can infer the construction of a new concept which leads to go beyond the perspective of centre and periphery, to another arrangement, moving away from any idea of centre, although the name still keeps this idea, or, in the direction indicated by Hannerz (1997), in addressing the need to visit and revisit old words when reflecting about changes and new concepts:

Ourselves, we need these words, and others; often we need new words, more accurate, to outline the changing world, and we must remember the old keywords, and how they have been criticised in the past, to know where we came from and to evaluate how far we went. (HANNERZ, 1997, p. 29)

Synthetic historical process of policies for culture in the municipality

During the 1980’s in Belo Horizonte there were not concrete policies for culture. For instance, there was a customary practice of borrowing equipment (stage, lighting) for various events in the city. This scenario promoted a functional and operational kind of municipal management, without interfering directly in people’s cultural practices, setting aside policy development beyond immediate demand. In general, there were one-off events of theatrical plays and other ad hoc events concentrated around the city centre.

In 1989, the Belo Horizonte Municipal Department of Culture was established. Until then, cultural policies were linked to the Department of Education. It was an extremely significant moment, which allowed, a few years later, for a "flowering" of artistic activities and more democratic participation throughout the city, as states Vieira (2007):

We enter the 1990’s with big news: the approval of the Municipality’s Organic Law, in 1992, and the implementation of the participatory budget from 1993. Both enabled the implementation of municipal cultural centres, whereas the creation of the Deliberative Council of Cultural Heritage, the revitalisation of the Praça da Liberdade, of the Praça da Assembleia and of the Municipal Park were actions resulting from the people’s new approach towards their city. Many of these events were made possible thanks to a change in emphasis on the municipal authority to a perspective of popular participation in decisions of urban planning. (Vieira, 2007, p. 127)

The fact that Belo Horizonte has invested in infrastructure, for over a decade and a half, enabled not only dissemination policies and one-off events, but maintaining continued programmes. The municipality’s Cultural Centres are literally living creative spaces, which people can access daily and regularly. Investments in infrastructure can interfere effectively in promoting cultural diversity, since it enables the planning of social campaigns in the main projects and programs of the Government in those spaces. Thus, when we speak about public policy planning and regionalisation of cultural facilities, we are referring to the decentralisation of the infrastructure, allowing cultural events in several areas of the city. We can mention four examples of programs which benefited directly from the employment of cultural centres:

The goal of Belo Horizonte cultural policy is to regionalise campaigns of the cultural management body of the city, and promote cultural and artistic activities in various areas of the city.

The Descontorno Cultural Program proposes simultaneous events in the cultural centres of the Municipal Cultural Foundation of Belo Horizonte and, as the name implies, outside the Avenida do Contorno (the city’s main avenue), expressing the cultural effervescence of Belo Horizonte. This project aims to provide a full day of fun activities in areas where access to cultural activities is more difficult, with Workshops, performances, artistic exhibitions, and more.

The focus of this campaign is the decentralisation of its campaigns. A publication that aims to democratise the access to resources of the Municipal Law of Cultural Incentive, designated, until then, only for artistic and cultural projects proposed by the city's central communities, expanding participation to artists and cultural agents from all areas of the city. It benefits each of the 50 projects with R$20,000.00 (about US$7,550.00). This financial help can also be used for the production of small cultural projects.

Publication of Public Bid focused on the decentralisation of cultural events through the selection of Music and Performing Arts artists to perform throughout the year in various cultural facilities of the municipality.

This cultural policy project consists of a set of campaigns aimed at democratising the city’s cultural goods and services, in order to reduce social and regional inequalities. Its adaptation and changing attributes, following emerging needs, made it capable to absorb the demands of any type of cultural practices.

General Consolidation of the regionalisation of public policies for culture throughout the region.

Specific Objectives: Regionalise campaigns of the cultural management body of the city, and promote cultural and artistic activities in various areas of the city.

Description: A network that brings together community cultural spaces linked to the municipal public authority of Belo Horizonte.

Beneficiaries: The people of the city’s nine administrative regions.

Through this programme, the various communities of the city could, after 20 years of military dictatorship, interfere effectively in municipal public policies, thus sharing responsibility with the civil society.

They include access to diverse artistic programming, physical access to creative living spaces, the possibility of artists and groups from various communities to disseminate their expressions in other areas of the city.

Programs that exist in conjunction with the Health, Environment, Education and Social Policy departments.

The City Council’s cultural spaces have a perspective of continuity, since the infrastructure of these spaces is their own, as well as the budgetary appropriations, and since they receive artistic campaigns from various programs of the City Council to compose their list of activities. 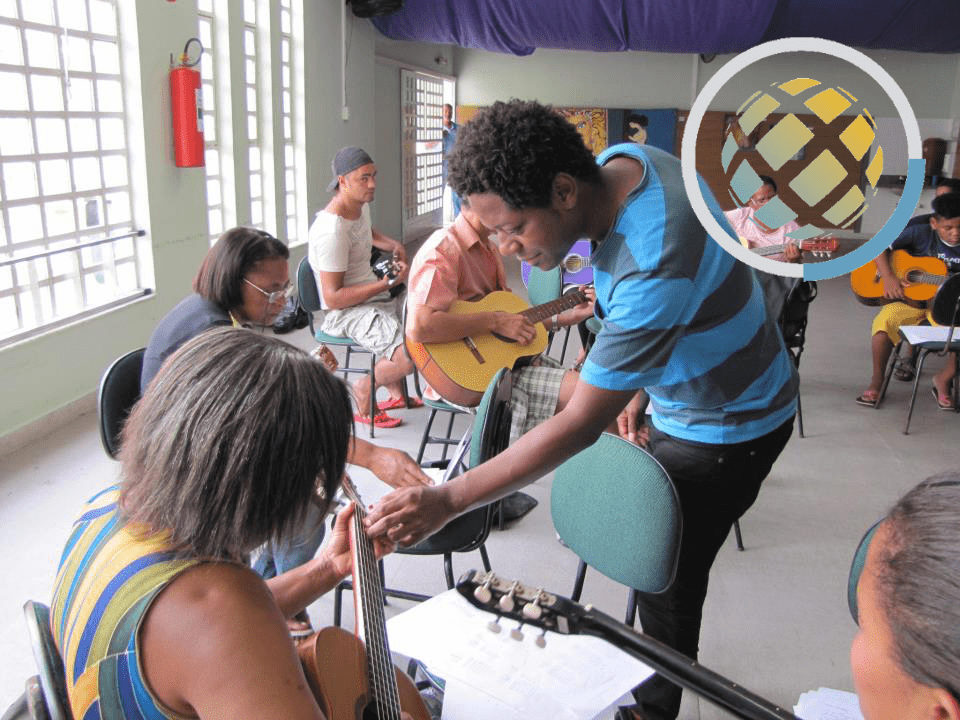