Cape Town is the 10th most populous city in Africa and one of the most multicultural cities in the world. It benefits from a diverse and vibrant population, a rich and complex history and abundant creative talent. It is also South Africa’s oldest city and is regarded as an iconic destination with striking natural beauty and a cultural heritage spanning more than 300 years. A diverse city, constantly on the cutting edge, it has a vibrant arts and culture scene and is a premier urban tourism destination with much to offer local and international visitors.

Cape Town was officially founded in 1652 by Jan van Riebeeck of the Dutch East India Company. It has a complex, layered and unique history, that includes Khoi and San peoples, South East Asian and African slaves, Nguni tribes and migrants who settled here.

While the city is recognised primarily as a leisure destination, it also provides excellent study, work and business opportunities. The city’s regional economic growth is driven by tourism, finance, infrastructure, food and wine, logistics and creative industries. Cape Town is also an innovative city and was awarded the World Design Capital designation in 2014.

The aim of the project is to provide guideline for developing mechanisms with which the city can support the development of the arts and culture sector in Cape Town.

The City of Cape Town’s (CCT) Arts, Culture and Creative Industries Policy (ACCIP) reflects the current development policies of the City. Of central importance is the CCT’s Integrated Development Plan (IDP). The ACCIP supports the IDP’s overarching vision for the city – as a prosperous city that creates an enabling and inclusive environment for shared economic growth and development – while concurrently seeking to animate its dedicated sector programmes. The nature and scope of the ACCIP means that it directly supports four of the IDP’s Strategic Focus Areas, namely the Opportunity City, the Caring City, the Inclusive City and the Well-Run City.

The policy aims to provide guidelines for developing mechanisms with which the CCT can support the development of the Arts and Culture sector, and guide internal transversal coordination between City departments providing arts and culture services. It establishes a framework to develop an enabling environment based on partnership building with relevant stakeholders as supported by relevant research, funding mechanisms and marketing efforts.

The arts, culture and creative industries are regarded as significant drivers of city development worldwide and have been successfully implemented by a number of cities.

The arts, culture and creative industries (ACCI) are regarded as significant drivers of city development worldwide. Their impacts (social, economic, spatial and cultural) have been well-documented in research, and strategies to develop creative economies have been successfully implemented by a number of cities over the past two decades.

The goal of the ACCIP is to create mechanisms to guide the allocation of resources such as human, financial, city services, and property towards the support of ACCI. Secondly, to create mechanisms for internal transversal coordination between various City departments that provide services related to ACCI. It also provides mechanisms for the development of an enabling environment that fosters partnership-building with stakeholders outside of the City. Lastly, it makes a case for, and facilitates increased investment by the City and other potential funders in ACCI.

The Arts, Culture and the Creative Industries Policy proposes a framework for implementation over 12 areas:

In developing the ACCIP the Department established a working group through local NGO the African Arts Institute (AFAI) consisting of prominent industry leaders, academics and cultural workers who gave feedback on the language, content and application of the policy, prior to its submission to Council. The CCT’s Arts and Culture Department (ACD) acts as the principal role-player in implementing and administering the policy’s ongoing management and evaluation, but also relies on partnerships and support from external stakeholders.

The Implementation Protocol between the CCT and the Western Cape Government, via its Department of Cultural Affairs and Sport, allowed for the development of the ACCIP. At local government level, the city is not required to create policy in line with National Government, although it is desirable for this be taken into account.

The ACCIP intended to benefit Cape Town’s population as a whole, as well as local sectoral stakeholders. The ACCIP was submitted to a public participation process and was advertised in local newspapers, libraries and on the City’s website for comment and recommendation from interested parties. After a period of 30 days this feedback was collated and adjustments were made to the Policy where appropriate.

The CCT has developed mechanisms to improve the co-ordination and mobilisation of culture in line with its Integrated Development Plan. In addition, through the creation of an inter-departmental transversal working group, the ACD has begun to enable a better understanding of the value and role of ACCI within local government, and of the opportunities for cross-collaboration and engagement.

The ACCIP is beginning to impact on key areas, namely; sectoral co-ordination, public art, the provision of cultural spaces, funding of cultural events and the promotion and marketing of the cultural and creative industries. Through continued engagement with cultural actors throughout the city there is also an increasing understanding of the role and capacity of government with regards to coordination, funding and other forms of support.

In the area of public life, the ACD has produced a Public Art Management Framework and a set of guidelines for busking in public spaces, thereby improving access to and use of public space. It has also embarked on a focussed programme to promote and market arts and cultural assets locally, nationally and internationally to position Cape Town as a significant city of culture and creativity and thus further local pride and economic development. Evidence of this can be seen in Cape Town Tourism’s increased promotion of Cape Town from a cultural and heritage viewpoint.

The ACCIP is beginning to impact on key areas, namely: sectoral coordination, public art, the provision of cultural spaces and the promotion and marketing of the cultural and creative industries.

An annual review of the roll-out of the ACCIP and the work of various ACCI programmes run by the City will be conducted in August of each year by the transversal body responsible for ACCI. The City will commission regular research into issues related to the concerned sector, assessing impact and challenges amongst others. Projects such as Cultural Planning, Cultural Needs Assessment Project and the State of the Arts research programme, focus on creating a methodology for the acquisition of resources (human, financial, city services and property). This will result in the development of an enabling environment that fosters partnership-building between stakeholders outside of the City. It is also a critical component in developing a robust, pragmatic user-friendly Cultural Planning Toolkit to be used by communities. This Toolkit will help manifest the benefits of culture in communities by being a catalyst for local government and community Cultural Planning initiatives. The Department responsible for Arts and Culture will initiate a formal review of this policy every five years, informed by annual evaluations.

The promulgation of the ACCIP in 2014 by the CCT is a definitive indicator/mechanism for ensuring continuity of approach in the foreseeable future. In addition, a well-supported ACD that works transversally with other CCT departments has the potential to cement the importance and relevance of the ACCIP. The continuity of the ACCIP will be managed by the ACD through a review process that allows for amendments and improvements by way of structured CCT and ACCI stakeholder engagement.

The CCT was a nominated candidate for the second 'International Award UCLG – Mexico City – Culture 21' (January-May 2016). The awards jury produced a final report in June 2016 and asked the Committee on Culture of UCLG to promote this project as a good practice of the implementation of Agenda 21 for Culture.

This factsheet was compiled by the Arts and Culture Department, Cape Town, South Africa. 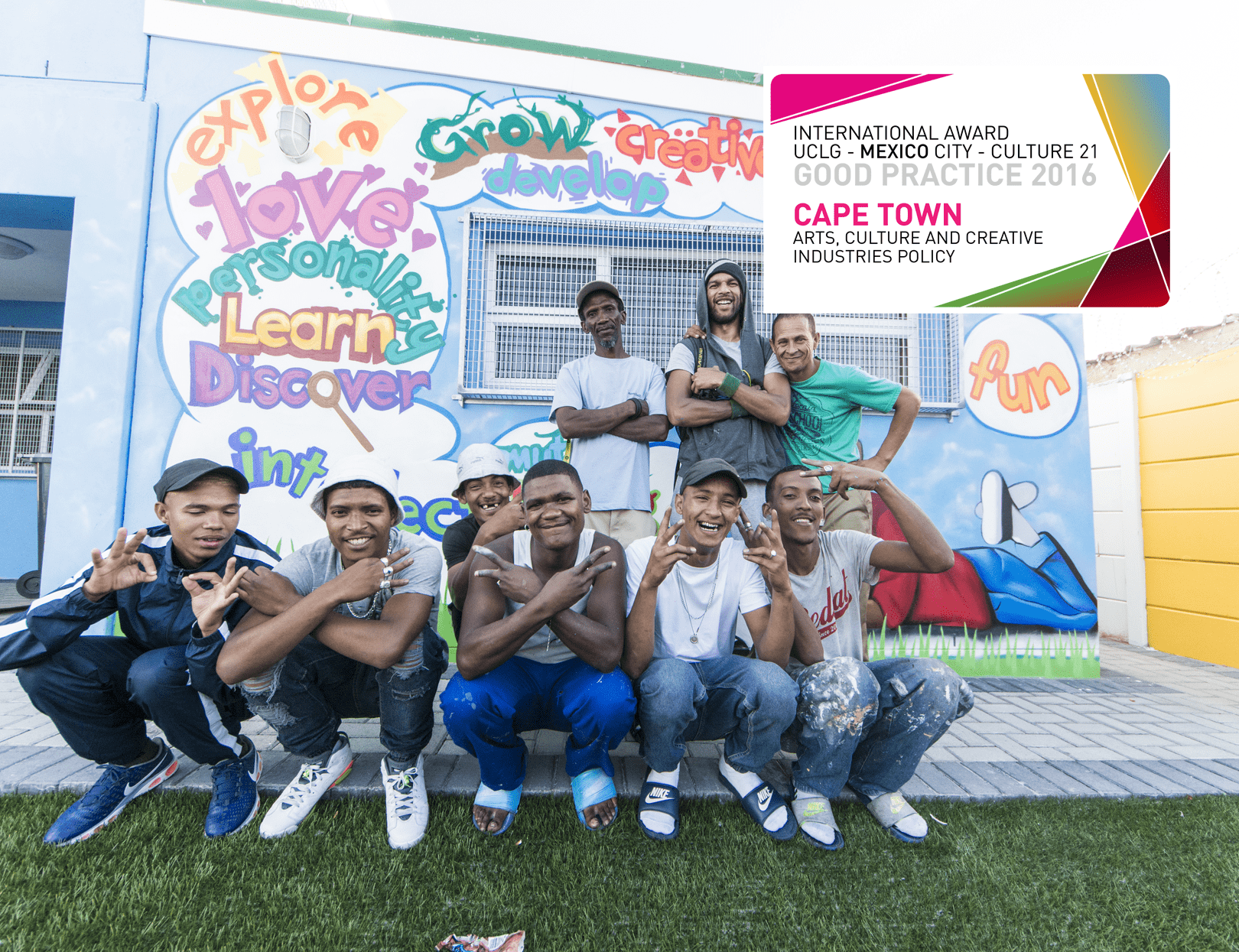