Called ‘Korean Santorini’ for a harmonised mingling of seashore lines and clis, the Huinnyeoul Culture Village has the blessings of scenic nature. However, after the outbreak of the Korean War in 1950, refugees settled in the village, and during the industrialisation period of the ’60s and ’70s it became a densely populated, illegal slum. Out of 306 buildings in the village, 252 (82.4%) buildings were illegally constructed, and 294 (96%) buildings were older than 20 years. It was a designated urban re-development zone until 2013, during which period no construction was allowed, accelerating its degeneration. Young people migrated out of the village, leaving behind the elderly and there were not enough services.

The vision of the Busan Metropolitan City’s cultural policy is to create ‘Global-Class City with Dynamic Culture’ and Yeongdo-gu has set ‘Oceanic Cultural Tour City’ as its administration goal. In a bid to achieve this goal, Yeogndo-gu has engaged in an open, cultural administration to incorporate the opinions of citizens and artists into policies.

The Busan Metropolitan City has pursued the Mountainside Road Renaissance Pilot Project and the Blissful Village Project to make culture easily available in everyday life. The Huinnyeoul Culture Village opened the Village University aiming to create a vibrant village community and stronger resident capabilities. It implemented a number of projects, such as study tour, resident town hall meeting, village festival, and kimchi giveaway. The village is offering various annual cultural events for the village residents, like rice soup sharing and a flea market, as well as attracting numerous visitors with the improved village infrastructure.

Yeongdo-gu has engaged in an open, cultural administration to incorportate the opinions of citizens and artists into policies.

The Huinnyeoul Culture Village goal is to make a blissful, sustainable, cultural village for residents. The village will make efforts to raise its visibility, both domestic and international, by leveraging the poignant history of its beginning, pleasant natural environments, and cultural resources.

The village worked together with the residents to improve a village environment, which brought in the national urban vitalisation enhancement project. This project helped improve key facilities in the village. The Mountainside Road Renaissance Project and the Blissful Village Project, as a part of the Busan’s Urban Regeneration Project, implemented various software initiatives.

Formed by approximately 20 village residents in 2014, the non-profit Huinnyeoul Village Community holds regular meetings. The Yeongdo-gu Urban Regeneration Project Group is pursuing the urban regeneration project to improve village environment, the Culture Tourism Division is working closely with the village residents to pursue village culture projects, and the Yeongdo Culture Centre is implementing projects with the residents as a project owner.

The huinnyeoul culture village goal is to make a blissful, sustainable, cultural village for residents.

The urban regeneration project and the cultural art project helped transform the village from a dark, rundown image to a village of vibrant culture and art. More visitors came and cultural artists settled in the village, which brought significant changes to the village.

Artists are opening bookstore-style cafés to continue their artwork activities. They engage in art activities during weekdays and sell work over weekends, and the village community runs a seafood restaurant to strengthen its self-independence. Partnering with the Old Busan Downtown Alley Festival, the Huinnyeoul Culture Village holds the Alley Festival and livens up with various events like artwork exhibition, cultural art program, resident singing contest, and rice soup sharing.

The urban regeneration project and the cultural art project helped transform the village from a dark, rundown image to a village of vibrant culture and art.

The village created new jobs by encouraging the village residents to participate and the resident-run village fortuneteller created conditions to have the residents take full ownership of self-management. The village artists engaged in experiential and cultural art activities at the resident-shared workshops located in free-leased houses. These developments helped enlighten the residents for culture and elevate their aection for the village.

The Busan Development Institute listed ‘Rediscovery of Yeongdo’ as one of Busan’s 10 best hot sellers in 2019 and the Huinnyeoul Culture Village was influential in this selection. Additionally, among many urban regeneration projects, the village earned the recognition of having carried out urban regeneration with culture. It also won the excellence award in the category of urban regeneration in the 2019 Korea Manifesto Best Practice Contest.

Unlike existing house redevelopment projects that are limited to hardware improvement, the Huinnyeoul Culture Village has the goal of leveraging urban regeneration for transformation, introducing culture and art through various cultural projects, and creating a cultural village. The village with the poignant past history, wishes to be recognised as a village that attracts any cultural artists as well as enriching everyday lives of residents with culture and art.

In December 2019, the outsourced service completed preparing for the urban regeneration vitalisation plan. With approval from the Busan Metropolitan City, the plan will put in place systems and procedures to implement sustainable developments for the Huinnyeoul Culture Village. Selected as a winner for the national legal culture city project, the village garnered the project budget of 16 billion KRW for the next five years and while pursuing the culture city project in its first year, the Huinnyeoul Culture Village will be granted a portion of the project budget.

Yeongdo-gu, Busan was a candidate for the third “UCLG Mexico City – Culture 21 International Award” (November 2019 – May 2020). The jury for the award drew up its final report in July of 2020, and requested that the Committee on Culture promote this project as one of the good practices to be implemented through Agenda 21 for culture. 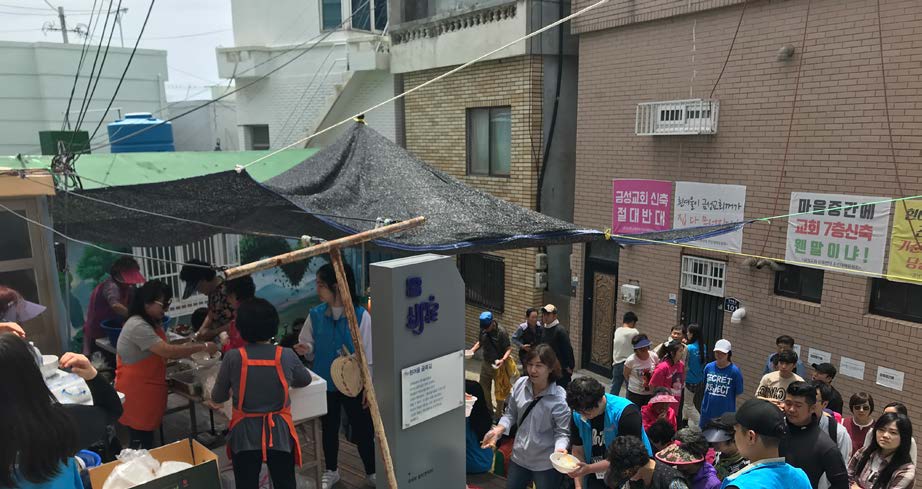