Yakutsk, 6.5 hours in plane from Moscow, is the largest city in the permafrost zone of Russia. It was founded in 1632 on the left Bank of the Lena river. Yakutsk is the capital of the Sakha Republic (Yakutia) and has the largest port on the river. The population, currently 335,000, is growing steadily and the national composition is very diverse. The city is famous for the contrast of summer and winter temperatures, ranging from -55 °C to + 39 °C. In Yakutsk winter lasts for seven months, and there is only three months of green grass. According to the ancient tradition of the Sakha people, in June, during the summer solstice, Yakutsk holds the national holiday “Ysyakh Tuymaady”. The festival attracts guests from all over the country, as well as from other regions and countries.

The Ysyakh Tuymaada national holiday is the core of the traditional culture of the Sakha people. As the main traditional cultural holiday, it represents the values and spiritual foundations of the people. The ancient fertility festival celebrated at the beginning of summer, combining elements of the deification of the sun, sky and earth, symbolises the theme of creation and the birth of nature and man. The idea of a spiritual unifying holiday is embodied in examples of folk culture: traditional rituals, guest etiquette, ritual treats and circular dances-osuohai.

The project was started by the mayor of Yakutsk, Ilya Filippovich Mikhalchuk and the cultural elements are managed by the chief of the Department of Culture and Spiritual Development. An important function of the holiday is its unifying function. In ancient times, during the Ysyakh period, truces were held between clans, military operations were stopped, peace agreements were made, and solemn oaths of honesty and loyalty were given. Glorification and unification of families, where the main organisers were the ancestors themselves, was one of the important characteristics of the old Ysyakh. Today it is the largest ethnic holiday.

An important function of the holiday is its unifying function.

The main goals of the Ysyakh Tuymaada are to transmit and preserve the holiday traditions of the people, unite the city community, and strengthen inter-ethnic relations. The festive actions reflected respect to the history, cultural traditions, and moral guidelines of the multi-ethnic people of Yakutia and the involvement of each person in the spiritual values of society, which gives both the memory of the past, a sense of the present, and confidence in the future.

The main goals of the Ysyakh Tuymaada are to transmit and preserve the holiday traditions of the people, unite the city community, and strengthen inter-ethnic relations.

According to legend, the ancestors of the Sakha people, Ellei, first performed the ritual of holding a Cup with kumis in honour of the light deities of ayyy, from which the life of the human race depended. According to ancient Yakut beliefs, ayyas (deities) descended from the heavens on the day of the summer solstice on the Ysyakh holiday. The Yakuts met them and arranged a rite of worship.

The organising Committee of the Department of Culture and Spiritual Development organises working groups for the preparation and holding of Ysyakh. Every year 15 working groups work in all areas of the cultural part of Ysyakh. In total, 119 cultural programs were developed at the festival: 15 ritual, 11 exhibition and presentation, 16 competitions and festivals, 63 concert programs, four sports and entertainment events, and nine children’s programs.

The opening ceremony of Ysyakh and the cultural program are attended by 150 amateur creative teams of the capital and the nearest districts (6,000 people) and include children and adult dance groups, vocal groups, creative unions, and public organisations. There are lifting a stone, archery, national wrestling, mas-wrestling, and running competitions and Ysyakh ends with worship the spirit of the terrain Aan Lahcen khotun.

A well-coordinated and efficient team of cultural workers plays an important role in the success of the event, but weather conditions can also influence the outcome of the event. Ysyakh Tuymaada won the all-Russian competition Faces of the Mass Theatre in the category Best National Holiday (2011). Ysyakh Tuymaada is included in the Guinness book of records with the most massive circular dance osuokhay, where more than 15 thousand people took a part (2012); the mass ritual kumys drinking, with the participation of 11 thousand people (2014); and the largest number of people in national costumes, 16,620 (2017).

For 22 years, Ysyakh Tuymaady has been developing, with new programs and competitions. The processes of the Yakutsk city administration for organising and conducting Ysyakh have been developed. Each structure organises its own area of work, and an organising committee, headed by the head of the administration coordinates the activities.

Amateur creative teams of the city of Yakutsk, districts, theater groups, museums, and students actively participate. Because of the Ysyakh Tuymaada, crafts, fairs, exhibitions of handicrafts, blacksmithing, modeling of national costumes, and a variety of national cuisine are held.

Evaluation of the project is carried out through the media, social networks, local television, and radio, as well as through the reviews of citizens and visitors to Ysyakh Tuymaada.

Ysyakh Tuymaada, organised in public urban space, contributes not only to the preservation and development of the ethnic identity of the Sakha people, but also contributes to the diverse ethnodialogy of the peoples living in the Republic of Sakha (Yakutia). The main task of scientists, cultural managers and state authorities is to preserve the spiritual heritage that goes back to the steppe horse breeding culture, and to develop ethnic ritual traditions as the symbolic capital of the northern region.

Every year, after the Ysyakh Tuymaada, each structural division of the city administration summarises the results of organisational work, which indicates the positive and negative aspects in the organisation of the holiday.

Yakutsk was a candidate for the third “UCLG Mexico City – Culture 21 International Award” (November 2019 – May 2020). The jury for the award drew up its final report in July of 2020, and requested that the Committee on Culture promote this project as one of the good practices to be implemented through Agenda 21 for culture.

This article was written by Koryakina Antonida Nikolaevna, Head Of the Department of culture and spiritual development of Yakutsk, Yakutsk, Russia. 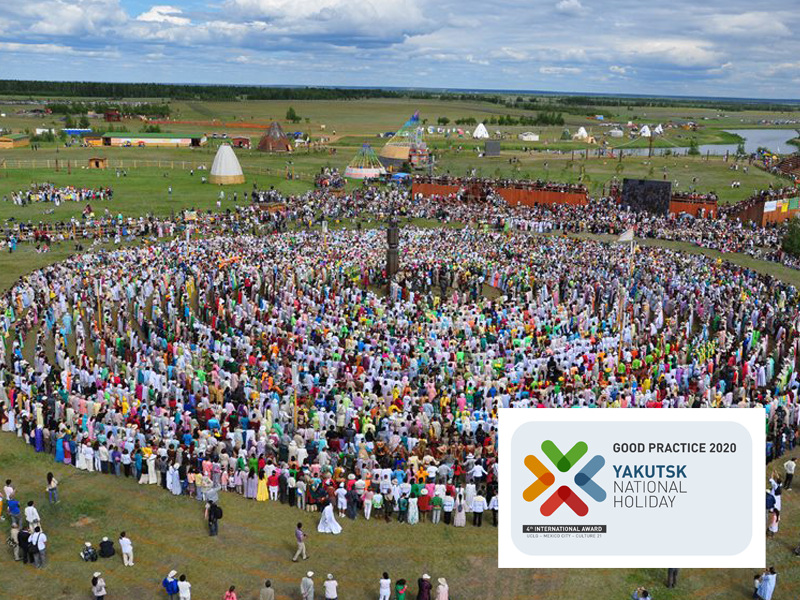