The Municipality of Valongo is celebrating its 185th anniversary, but the history of this 75 km2 territory, where the cities of Alfena, Ermesinde and Valongo live side by side with the villages of Campo and Sobrado, goes back millions of years to the Paleozoic Era.

With approximately 100,000 inhabitants, Valongo has a rich and diverse identity, with unique features that distinguish its territory, such as the age-old tradition of Biscuits and Regueifa bread, the art of the traditional Portuguese toy, the Festival of the Bugiadas and Mouriscadas, the Slate Festival, its religious monuments and the beauty of the Santa Justa and Pias Hills in the Serras do Porto Park.

In Portugal, as well as throughout the world, many citizens feel a deep distrust of the political institutions that represent them, which can lead to mistrust and indierence. Additionally, although there is more access to information than ever, there is also a great deal of ignorance about certain mechanisms of democracy that prevent citizens from being actively involved in political decisions in their community. With weak participation and a poor understanding of democratic mechanisms, the potential of a community and its respective development are highly impaired.

The establishment of the More Informed and More Participatory Community policy, the Municipality’s respective openness to transparency issues, and its efforts to encourage public participation as well as education for the citizenship of its residents, is intended to raise awareness of the importance of involvement in public policies. Additionally, it is expected that this process will foster the development of the Municipality in all areas. Valongo believes that each individual is both the product and the key element to help develop responsive, inclusive, participatory and representative citizenship at all levels.

Valongo believes that each individual is both the product and the key element to help develop responsive, inclusive, participatory and representative citizenship at all levels.

The umbrella project ‘More Informed and More Participatory Community’ aims to promote a participatory culture by encouraging citizens to become involved in community life and local politics. Specifically, it aims to increase citizens’ confidence in elected representatives and other public institutions, as well as to strengthen the sense of mutual responsibility among citizens, elected representatives and their communities. The project aims to bring citizens, the municipality and the electorate closer together and collaborates with local actors, such as teachers, students, associations and youth workers.

Participatory projects such as Participatory Youth Budget of Valongo (PYBV) and Internal Municipality Participatory Budget have made it possible for the citizens to be more involved. Within the PYBV, young people have presented projects such as: DAReab, a project on supporting the isolated Alzheimer patients; History of Photography, promoting the interaction of young people and the elderly through photography; or the Classrooms of the Future, a project that updated classroom installations.

Projects such as the Living Library, with 14- to 18-year-old students, aims to address stereotypes and prejudices in a structured environment. It allows an informal and constructive dialogue between students and ‘Human Books’ – volunteers who are frequently the recipients of prejudices and stereotypes. Other projects, such as the Regueifa and Biscoito Fair, which focuses on regueifa (a type of bread) and the biscuit or The EXPOVAL Exhibition of Economic Activities in the Municipality of Valongo, promote local products. Other activities include a Traditional Toy Fair and MANIFESTUM, a Poetry and Spoken Word Festival.

In terms of impact, the municipalities have shown themselves to be in favour of making the tools available, and there has been an increase in the number of people involved in the processes. The ambition is that with the continuous practice of politics, the adhesion to the processes of public participation will be increased, and that it will reflect a fair, informed and active society.

The ambition is that with the continuous practice of politics, the adhesion to the processes of public participation will be increased.

There has been an improvement in the systematisation of information on public procedures and transparency in their implementation, which has led to satisfaction on the part of the residents. The European Local Democracy Week sees an increase in participants every year, thus leading to an increasing dissemination of key content relating to democracy. There has also been a rise in participation for the Accountability Week, due to the more decentralised method of information dissemination. Similarly, the Participatory Youth Budget of Valongo (PYBV) has seen the increased participation of young people.

Given that this project involves several initiatives, the evaluation process has been different for each activity. In order to ensure the quality and consistency of response, the KAIZEN philosophy was introduced in each Division, thus promoting a culture of continuous improvement of working practices. For every event that occurs, the numbers are registered, and a report is created and shared. This has been a stepping-point, as it has improved continuity and evaluation of processes, budgets and costs.

As the presented practice is ongoing and extensive to several practices and initiatives implemented by the Municipality, there is no general budget for the umbrella project; however, since the other initiatives it covers are divided into Divisions and/or defined working teams, there are allocated human resources and funds within them for the development and sustainability of each initiative.

Valongo was a candidate for the third “UCLG Mexico City – Culture 21 International Award” (November 2019 – May 2020). The jury for the award drew up its final report in July of 2020, and requested that the Committee on Culture promote this project as one of the good practices to be implemented through Agenda 21 for culture.

This article was written by Gisela Barbosa, Head of Division of Youth and Citizenship of the Municipality of Valongo, Valongo, Portugal. 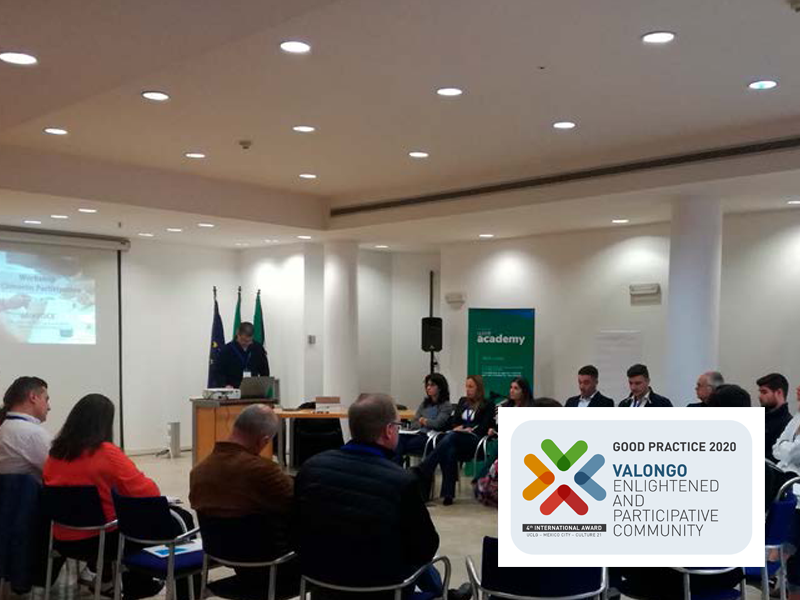