Gaziantep is located in the south-eastern region of Anatolia in Mesopotamia. The city is one of the oldest continuously inhabited cities in the world. Its history dates back to the Bronze Age and is home to Hittite, Roman, Byzantine, Seljuk and Ottoman layers. Due to its special location on the Silk Road, the city became during the Ottoman reign a centre where goods and money, but also beliefs, traditions, thoughts and scientific knowledge, were exchanged. Thus, the city created a unique multicultural social structure which strongly reflected in the gastronomic culture.

The project was initiated by Gaziantep Metropolitan Municipality on April 2013. Cuisine is the main fact to identify Gaziantep and has always been the main cultural and economic development agent. However, no specific institution was dedicated to traditional gastronomy.

The city’s challenge was how the interplay physical design and culinary practices can help to socially maintain a rich, productive and sustainable urban space. To do so, MUSEM adhered to a sustainable development approach which turned out to be a project initiator. Different kind of courses and events were organized for youths, children, chefs, students or women. The aim is to remind forgotten dishes, ensure the transmission to future generations, improve well-known aspects of kitchen and teach the unknown parts of the dishes.

Through the impetus given by MUSEM Culinary Centre after only 2 years of activity, Gaziantep was awarded from European Commission EDEN Award on “Local Tourism and Gastronomy” and selected as a member of UNESCO Creative Cities Network in the field of gastronomy. It permitted to the city to take its place among the globally known gastronomic cities.

THE AIM OF THE PROGRAMME IS TO KEEP ALIVE THE INTANGIBLE CULTURAL HERITAGE THAT REPRESENTS GAZIANEP’S GASTRONOMY AND TO INTRODUCE IT TO THE LARGEST AUDIENCE.

The city developed various applications such as climate change action plan, environment protection plan, pistachio and olive eco-parks in order to ensure the protection of agriculture, the ecological balance and its cuisine based on local production. Since 2014, Gaziantep Metropolitan Municipality launched a large program to improve the streets layout, city infrastructures and architectures, as well as housing zones. Landscaping programs as well as research on solutions in ecological norms have been launched; and restoration of the traditional buildings is still in progress.

Gaziantep carries out different programs to sustain its development. Whereas gastronomy is designed as the main driving force by enabling the participation of women in active work life, traditional handcrafts are used to include disadvantaged groups and disabled people in cultural life, and almost all centres that provide gastronomy education also organize training sessions on handcrafts for them. Moreover, similar projects that have been successfully implemented in the past are now used to ensure that the hundreds of thousands of Syrian immigrants can express themselves freely and better socialize with the locals. Gastronomy is an intangible cultural heritage but it is the strongest factor that ensures cultural fusion for all in Gaziantep.

DUE TO ITS SPECIAL LOCATION ON THE SILK ROAD, THE CITY CREATED A UNIQUE MULTICULTURAL SOCIAL STRUCTURE WHICH STRONGLY REFLECTED IN THE GASTRONOMIC CULTURE.

The aim of the program is to keep alive the intangible cultural heritage that represents Gaziantep’s gastronomy and to introduce it to the largest audience (at a local and international level).

Gaziantep Cuisine Course, which is organized with Public Education Centre and approved by the Turkish Ministry of Education, consists of 264 hours courses and trimester courses. The students are given course completion certificate approved by Gaziantep Metropolitan Municipality and the Turkish Ministry of Education. It provides trimester or 72 hours training programs both for amateurs and workers during the weekend. The trainings consist in workshops, food contests, kitchen discoveries as open days (or other activities promoting Gaziantep Cuisine), foodies, gourmet or food researcher interviews, etc. (Total of 110 amateur certificates)

Although gastronomic assets belong to the traditional food, Research and development projects are always in progress, besides trying to get over the difficulties that MUSEM can face with the trainings. While keeping Gaziantep Cuisine authentic, the centre tries to improve its knowledge and activities linked to other kinds of cuisine. To this purpose student exchanges or cookery workshops with foreign chefs are organized. For instance, in 2013, Daniel Rebert who is Michelin Star chef had 3-day workshop with the different target groups. Until now, 360 people finished successfully trainings on Gaziantep Food and received a certificate of successful completion. Moreover, due to the popularity of the program, a pre-registration system has been established for the trainees.

CULINARY ACTIVITIES WITH MUSIC, LITERATURE, THEATRE, OR TRADITIONAL HANDCRAFTS, HAVE BEEN USED FOR DECADES TO EDUCATE PEOPLE WITH LOW SOCIO-ECONOMIC STATUS AS WELL AS WOMEN AND DISABLED PEOPLE.

The program benefits to food industry workers, chefs, disadvantaged groups, women, students, and people who want to work in the food industry. In short, anyone who wishes to improve in Gaziantep cuisine. It has greatly benefited to the population living in areas where there is a need to stimulate the physical, economic and social regeneration, especially for housewives who have seen their grown children move away and who want to remain active and part of the community. The fact that the trainings is certified and recognized by the Ministry of Education brings a high level of satisfaction and self-esteem to the participants. It can allow them to search an employment in the food sector or just to be recognizing inside their family.

So far, the MUSEM Culinary Art training Centre is the only centre in Turkey directly supported by the Social and Cultural Department of a municipality. De facto, this program appears as a pilot project in Turkey and an example to follow for the other municipalities. Impact of the project on the local government can so be measured by the establishing of planning, evaluation and indicator frameworks for cultural development.

The project benefits the participants and makes the staff and trainees proud. It reinforces economic, social and territorial cohesion, gives a strong identity to the community and strengthens the social and cultural inclusion.

IN TERMS OF HUMAN RIGHTS AND GENDER EQUALITY, IT PROVIDES TO ALL AN EQUAL ACCESS TO THE KITCHENS, TRAINING AND CONTESTS, WITHOUT DISCRIMINATION AND THEREFORE ENSURING CULTURAL INCLUSION TO THE DISADVANTAGED PEOPLE.

While identifying the population in difficulty, the program enabled the creation of a social link between governance and citizens. Through gastronomy and its convivial aspect, many persons who would hesitate to go out to encounter different people or cultures, take a step and gain in self-esteem.

As mentioned before, this program can be considered as a paradigm and as a model for the local and national institutions. In terms of human rights and gender equality, it provides to all an equal access to the kitchens, trainings and contests, without discrimination and can ensure cultural inclusion to the disadvantaged people.

The Culinary Art Centre management applied a survey which is prepared according to ISO 9001 Quality Management System targets. After this survey, results are examined and shared with the executive board of the Centre, then with the Cultural and Social Department of Gaziantep Metropolitan Municipality.

The implementation of MUSEM allowed Gaziantep Metropolitan Municipality to fulfil its obligations and to continue to pay attention in the future to this kind of projects. As a result of the success of the Culinary Art Centre and the constant search of challenges, more programs and projects followed.

Thus, the program permitted to the city to enter in the UNESCO Creative Cities Network. The common objective is to work together for placing creativity and cultural industries at the heart of local development plans and cooperating actively at the international level. As part of this network, Gaziantep has the responsibility to create projects and initiative involving citizens and other cities of the network. These programs, due to their international approach will provide more opportunities and the possibility for the city to communicate in a large scale on the inter-cultural dialogue and locally to extend the program of the Culinary Art Centre to other centres throughout the city.

THE EXCHANGE PROGRAMS OR COLLABORATION OF FOREIGN CHEFS ARE ENCOURAGING THE CULTURAL COOPERATION AND THE INTER-CULTURAL DIALOGUE.

The city of Gaziantep was a nominated candidate for the second 'UCLG International Award – Mexico City – Culture 21' (January-May 2016). The awards jury produced a final report in June 2016 and asked the UCLG Committee on Culture to promote this project as a practical example for the

implementation of Agenda 21 for Culture.

This factsheet was put together by Mrs. Derman Kahraman, Director of Foreign Affairs Department, Gaziantep, Turkey. 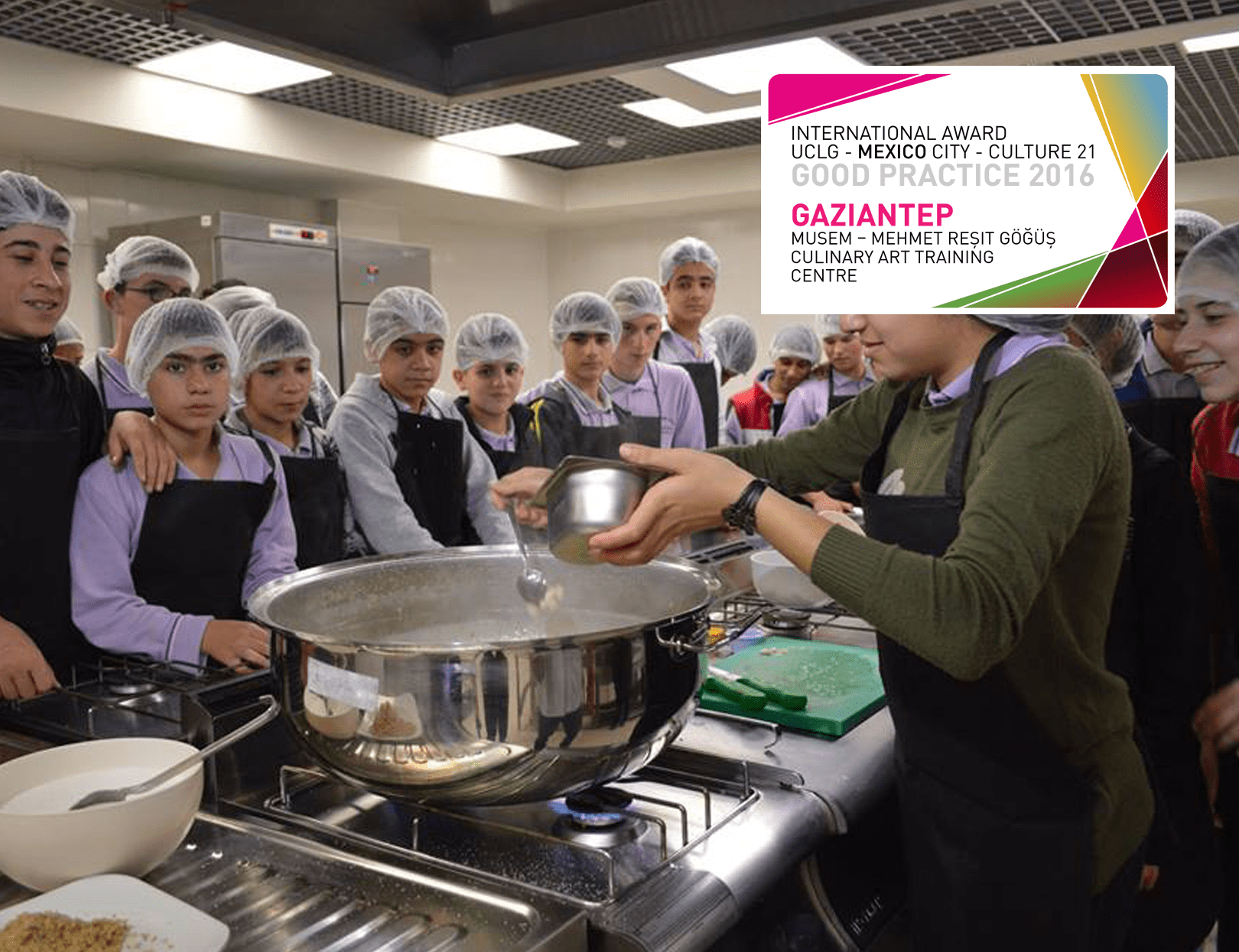