Catbalogan city is a former fishing village, established in 1596 by Jesuit missionaries, located in western Samar, one of the tree provinces of the island of Samar, Philippines’ third largest island. More broadly, the island is part of eastern Visayas region, whose capital is Tacloban city, in Leyte island.

In 1616, Catbalogan became the capital of the whole island of Samar. Its central geographic location contributed to turning the city into a political, institutional, economic, cultural and historical centre and an ideal gateway to Samar island. Spread over 274,22 sq.km, the city is divided into 57 villages, 24 of them being urban, 12 coastal, 10 islands and 11 uplands. It became a formal city only in 2007, and recently celebrated its 400th year anniversary as Samar’s capital. As of 2015, Catbalogan’s population reached 103 879 inhabitants, with 60 000 additional visitors during day time, mostly coming from nearby municipalities for trade or studying.

Small cities like Catbalogan are no less vulnerable to climate change than others, regarding not only the destruction of physical structures, but also the deterioration of cultural identity and heritage. Cultural resilience, similarly to disaster-resilience, must involve all actors to be effective and ensure the continuity of programmes.

In 2004, the first culture and arts council was set up by the municipality. The City ordinance No. 2011-004, (January 19, 2011), mandates the creation of the city tourism council while city ordinance no. 2015-014 (May 06, 2015), mandates the creation of the Catbalogan city culture and arts council. These multi-sectoral councils were tasked to conscientiously retrace Catbalogan’s ethnicity and old way of life, revolving around the following features: a coastal city, and a fishing and trading community. The same year, in august, a first month-long celebration was organised to celebrate the local culture and traditions, marked by the coastal lifestyle inherited from the first original communities settled near the river. This event became a perfect opportunity for the city to highlight the important role played by the local Maqueda bay in shaping local history, culture and economy.

This annual celebration was then institutionalised, each August, under the name of “Mangirisda festival of Catbalogan”, originating from the word “isda”, which means fish. In 2007, the general identity of the said festival was changed, using the term “dagat”, which means sea, to create the Manaragat festival (people of the sea festival) of Maqueda bay. Since then, the festival’s reputation grew from a mere celebration to a uniting and federating event, encouraging good camaraderie and empathy for the people and for Catbalogan as a whole.

Merging culture with nature and environment, the Manaragat Festival reflects Catbaloganons2 sentiment of remaining faithful to its origins, while remembering its past to build its present and future. It tells a story of resilience, the story of every Filipino.

The general aim of the project is to promote the city of Catbalogan through preserving its cultural heritage and protecting the territory’s natural resources.

Mainly religious and cultural, the Manaragat festival consists in two distinct events: first, a month-long event, taking place in August, and then, the participation of a local team (“tribu katbalaugan”) to continuous activities and events all over the year in order to raise awareness on issues related to culture and environment.

The City Tourism, Culture, Arts and Information office is in charge of the annual management of the festival since 2016, in partnership with schools (five primary district schools, seven secondary schools, and three tertiary schools in the city). The business sector, including the Chamber of Commerce as well as business establishments, supports the program through sponsorship and active involvement.

The Festival is a multi-stakeholder event, gathering the city tourism and culture and arts offices, local barangays, together with local schools and corporate partners.

Every year, the festival is anchored on a specific theme: in 2017, it was “karisyo katbalogan”, meaning “Forward. Farther. Further”, a call to continue the momentum of progress and development as well as to highlight the colourful and vibrant culture of Catbaloganon.

The activities and events that take place during the festival in August include the following:

While Manaragat festival is Catbalogan city’s official festival, “Tribu katbalaugan” is the local official contingent team. The word “tribu” means “group” or “clan”, and “katbalaugan" refers to the original name of Catbalogan city, “balaug”, a shrub that thrived along Catbalogan's seashore and sandy banks of the Antiao river, which was later used to describe the whole community as “katbalaugan” or “kabalaugan”, a place where seafarers, fishermen or sailors take shelter or protection. For several years, Tribu katbalaugan distinguished itself in a series of international competitions, wearing the banner of Catbalogan city.

The group was first formed during the 2015 edition of Sinulog festival of Cebu city, Philippines. This annual cultural and religious festival is considered the greatest and most distinguished festival in the Philippines, gathering millions of tourists and pilgrims to Cebu, and generating millions of incomes. On this occasion, Tribu katbalugan ranked 3rd in the free interpretation (fi) category in 2015, and 1st runner-up in the same category in 2016 and 2017 – it then ranked 2nd runner-up in the 2018 competition. The contingent also championed the street dancing competition in 2017, and won 1st runner-up placement in 2018.

The Aliwan fiesta is another national competition of festival champions, held every April in Manila, organized by the Manila broadcasting company. In its first appearance in 2015, Tribu katbalaugan won the grand championship title on the first try, an achievement never seen before from an eastern Visayas festival contingent. The group won back-to-back victories in 2016 at Aliwan fiesta competition, as well as at the festival powerhouses of Lumad Basakanon in Cebu City, and at the Dingyang festival of Iloilo city. In 2017, as it was aiming for another victory, Catbalogan city only ranked 3rd in the Aliwan street dancing competition.

Since its inception in 2004 and official branding in 2007, the festival has become a source of pride and synergies of religious, environmental and cultural values shared by Catbaloganons. This initiative has a significant positive impact on each barangay (villages), including on their elected officials and their constituencies, who can build on the cultural and environmental awareness aroused by this program, for instance through the development of solid waste management programs.

The Manaragat festival was able to tap cultural actors of the city including non-government organizations and the socio-civic groups, which are included in both the culture and arts council and the tourism council.

The creation of the city office for tourism, culture, arts and information was instrumental in the transformation of the Festival into an advocacy platform for cultural preservation and environmental protection.

The Manaragat festival has contributed to increase the confidence of small and micro entrepreneurs by enabling local producers, suppliers and small business owners to display their produce and crafts, thereby ensuring sustainability of the craftsmanship as well as sustainability of agricultural and local products.

The festival also triggered social change within the Catbalogan community, through being able to protect and promote cultural diversity, and the right, fair access and active participation of all individuals to culture.

The festival was also able to raise the awareness of citizens towards the protection of the sea and the city’s coastal areas, through the regular conduct of clean-ups, and the designation of ambassadors and ambassadresses responsible for promoting environmental protection and cultural preservation, as a way to champion young people.

An assessment programme is underway since new management responsibilities were devolved to the City Culture and Arts division, to address its expansion and sustainability. It is based on the following indicators:

In addition to the creation of the management office, a key success factor was the exposure received by the festival during conferences and local and international events, through its official festival contingent, Tribu katbalaugan (in 2019, it will even perform in Singapore). The programme also made the front page of UCLG ASPAC newsletter (November 2016 - April 2017), and Mayor Stephany Uy-tan introduced it directly during UCLG Culture Summit in 2017 in Jeju.

The sustainability of the program is ensured through the Office of the city tourism, culture, arts and information. Moreover, there is an ongoing plan to create a private foundation to manage the festival in the future, under the supervision of the city government. This would enable to give more power to non-government organizations and socio-civic groups in terms of decision making, implementation and monitoring.

Catbalogan was a candidate for the third "UCLG Mexico City – Culture 21 International Award" (November 2017 – May 2018). The jury for the award drew up its final report in June of 2016, and requested that the Committee on Culture promote this project as one of the good practices to be implemented through Agenda 21 for culture. 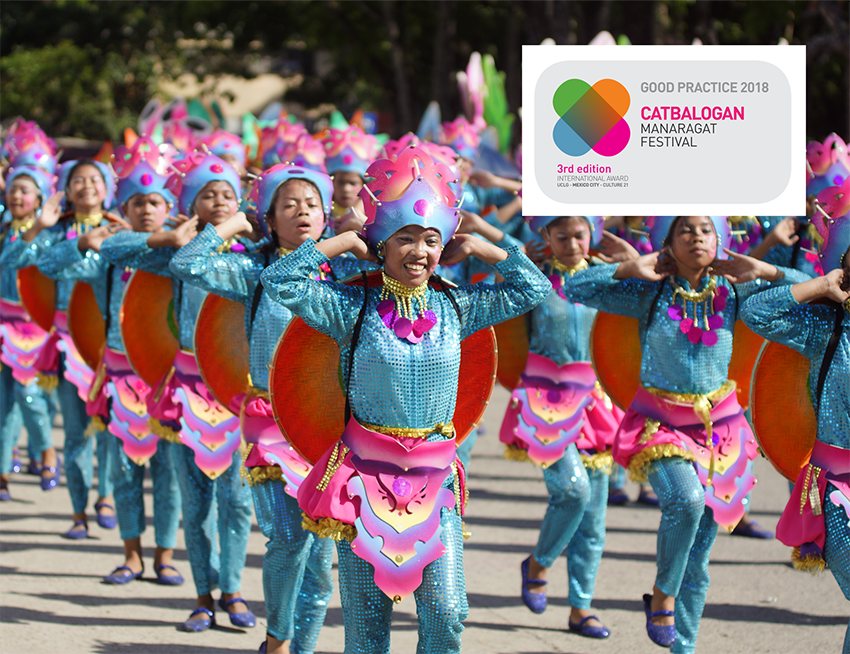