Jinju is a city of urban and rural areas with a population of 350,000 with about 1,300 years of history. In 2019 the city joined the UNESCO Creative Cities Network (UCCN) in the field of Crafts and Folk Arts and the traditional artform Nongak was designated by UNESCO as Intangible Cultural Heritage of Humanity.

There are a total of 41 organisations of intangible cultural heritage and professional arts, which are engaged in the performance, transmission, and education of folk arts, and there are 30 community centres throughout the city. There are more than 10 local festivals held in Jinju every year, and the Gaecheon Art Festival has been a leader in the region in fostering musicians, dancers, artists, and writers.

In September 2016, the City of Jinju adopted a new urban development policy that highlighted culture as the city’s fourth administrative pillar. However, analysis revealed that the city lacked cultural infrastructure, the industrialisation of cultural assets was at a rudimentary level and there were few international artistic or cultural exchanges. To address this, and to take advantage of its strengths in preserving and transmitting traditional cultural assets, the city initiated a grassroots cultural project to standardise Jinju’s folk dances so that anyone can learn and promote this dance.

The city initiated a grassroots cultural project to standardise Jinju's folk dances so that anyone can learn and promote this dance to all its citizens.

Jinju chose to promote the deotbaegi dance (popular with the people) and the sword dance (originally enjoyed by the aristocracy), and taught them in 30 community centres and many after-school programmes.

The Dancing City Jinju: Folk Dance Dissemination Project has three objectives. The first is to operate grassroots cultural processes to make Jinju a global ‘city of dance’ by giving citizens an opportunity to learn and participate in folk dances.

The second objective is to narrow cultural gaps between classes and regions by bringing all citizens together, including children, young people and vulnerable groups, to participate in folk dancing.

The third objective is to establish an arts and culture ecosystem by discovering and nurturing creative talents at an early age, leading to a sustainable city led by culture and creativity.

It is planned that each year 20 groups and 400-500 students and citizens will receive dance lessons for each folk dance. The goal of this project is to organise three or more groups for each folk dance in all 30 towns and villages within three years and to offer classes to more than 10,000 people within 10 years.

This project has greatly changed the administration of the local government in the areas of arts and culture from a topdown method of decision-making to an approach that acknowledges cultural actors as partners.

This project has greatly changed the administration of the local government in the areas of areas of arts and culture from a top-down method of decision-making to an approach that acknowledges cultural actors as partners.

As the project was carried out as a grassroots cultural process, the unilateral administration of the local government was considerably reduced, to include more collaboration with cultural artists who systemise and disseminate folk arts education programmes as well as the interested parties and institutions of the area concerned.

The project laid the groundwork for a local cultural ecosystem to foster creative talents. Folk artists who have thus far worked individually and independently, now cooperate for the promotion of folk dances and participate as co-producers in various cultural events. The project has also had a positive effect on neighbouring regions, by reminding their residents of the values of their own folk arts and culture.

Many citizens learned Jinju folk dances, which helped to raise pride in local culture and establish Jinju’s cultural identity. By disseminating folk dances to vulnerable social groups, citizens’ cultural rights have been enhanced. Furthermore, the gaps between regions and classes in terms of access to and enjoyment of arts and culture have narrowed. Additionally, financial compensation to artists from traditional arts preservation organisations who participated in classes contributed to the Jinju creative industry ecosystem.

Some challenges included difficulties in:

Dances were performed on several occasions (such as at the 57th Gyeongnam Sports Festival or the Jinju World Folk Arts Biennale); the project was selected as a good practice in the field of heritage, diversity, and creativity; Jinju was designated as an UNESCO Creative City in the field of Crafts and Folk Arts; and Jinju is working on the improvement of facilities at town and village community centres and the expansion of lesson programmes.

From its initial stage, the project was designed to establish institutional devices for its sustainability. The Promotion Committee adopted the project as a part of the Creative City Jinju Promotion Plan and secured continuous financial support from Jinju.

Jinju was a candidate for the third “UCLG Mexico City – Culture 21 International Award” (November 2019 – May 2020). The jury for the award drew up its final report in July of 2020, and requested that the Committee on Culture promote this project as one of the good practices to be implemented through Agenda 21 for culture. 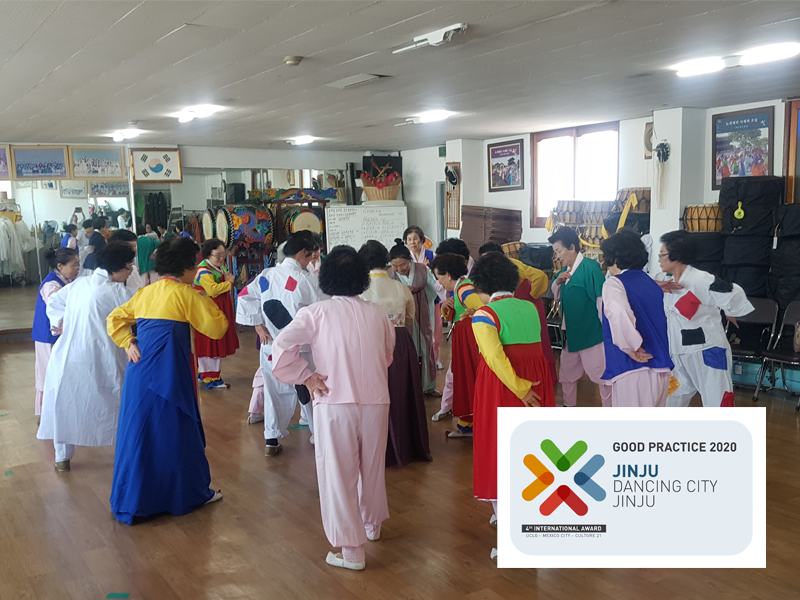