Heritage Tracks: a lever to enhance the cultural diversity of Baie-Mahault

The history of Baie-Mahault was established by and around migration and mobility. Migratory movements have made a powerful contribution to shaping the commune’s demography and to forming an original, multi-ethnic society, resulting in the cohabitation and intermingling of diverse cultures, giving rise to a rich intangible and
cultural heritage.

We can affirm Baie-Mahault’s cultural diversity is characterised by:

Since 2001, the municipal team has made cultural democratisation a leitmotif.

In the interests of conciliating the urban planning and development policy with the cultural policy, the municipality began the development of a Local Urban Master Plan (PLU), which aims at protects natural heritage as a whole (watercourses and ravines, 381 mouth areas, marine environment and their biodiversity), a Sustainable Development Master Plan (PADD), which provides for the protection and enhancement of urban and rural built heritage and strengthen ecological solidarity, and a Heritage Charter, which maps built, natural, memorial and intangible heritage.

The Project “Heritage tracks” is articulated around five axes of development for the coming years:

The objective is to make culture and heritage levers for territorial development by promoting cultural diversity.

The following commitments of Culture 21 Actions are respected:

The creation of “Heritage Tracks” has clearly contributed to revitalising cultural policies. It is an innovative concept that highlights and strengthens the cultural diversity of our territory.

Our project, embedded in a comprehensive approach to sustainable cultural development, finds echoes in five SDGs: education, reduction of inequalities, sustainable cities, peace and strenghtened institutions, as well as partnerships for the goals.

The commune of Baie-Mahault has become the economic crossroads of Guadeloupe. This heritage enhancement project has shown that the attractiveness of the territory can also stem from the town’s cultural diversity.

Therefore, the overall objective is: to make culture, and more specifically heritage, a lever of territorial development by enhancing cultural diversity.

The Local Urban Master Plan draws up guidelines for development and specific zoning to protect heritage and the implementation of conservation actions, reflecting the cultural diversity of the territory.

The Track “In the footsteps of Ignace and his companions”

The Track materialises part of the route taken by Joseph Ignace and his companions during the 1802 war — a war against the re-establishment of slavery, which was abolished in 1794, through the creation and installation of a sculpture, interpretation panels and signage, as well as guided tours and theatrical and musical performances.

Restoration of the war memorial

Built in 1935, the monument to the dead of Baie-Mahault is an art-deco sculpture with an exceptional iconography. It represents an important element of Guadeloupe’s colonial past. Its restoration was accompanied by several participatory activities: wreath-laying, theatrical play, reading of texts and creation of a permanent outdoor exhibition accessible to all.

The naming of roads, squares and public buildings

A legal and intellectual act of practical significance. The aim is to draw up an addressing plan for public roads and buildings, in consultation with neighbourhood associations and residents, with a cultural focus.

The AME is a small coastal maritime area, supported by the French Agency for Biodiversity, in partnership with the Rectorats and managed in a participatory manner by 50 pupils from a primary school. The AME is an educational and eco-citizen project for the knowledge and protection of the marine environment by young people. The marine area chosen by the town covers an area of approximately 300 m2. It is characterised by a diversity of landscapes (natural, marine and urban) and by international environmental protection.

Measures to safeguard the identity of the intangible heritage, symbolised by “Gwo Ka”

The Jabrun area, a former farm, is an important place for the expression of “gwo ka” in Baie-Mahault.

In 2006, the municipality undertook to rehabilitate the Jabrun sector. In 2012, it decided to perpetuate the memory of the Jabrun moorings through an artistic creation.

Other actions have also been implemented through the naming of neighbourhood houses and cultural spaces after GwoKa personalities.

Generally speaking, there has been a revitalisation of the town, which has taken place through the participatory democracy of the citizens, a greater consideration of environmental protection and an awareness of Baie-Mahault’s cultural diversity. In addition, the economy and the attractiveness of the conurbation territory — Cap Excellence — are being revived, notably through tourism.

This is a pilot project, included in the Strategic Plan for Cultural Action, approved by the Municipal Council. The main results were: adherence of young people from within the municipality, good representation of civil society in all its diversity: over 10 neighbourhoods, members of associations, artists, cultural actors and local elected officials, and the enhancement of cultural governance and participatory democracy in order to make culture a lever for territorial development, through a cross-cutting approach and the pooling of competences.

The success of this project is conditioned by complete ownership by elected officials and decision-makers, and by the effective support of citizens.

For the former, this was demonstrated through meetings of cultural committees and during the sessions of the Municipal Council to validate the project. This led to the inclusion of the Strategic Plan for Cultural Action and the project in the contract for the 2020-2026 term of office.

With regard to citizen support, this was illustrated by the active presence of men and women as well as members of associations from different neighbourhoods at consultation meetings, to co-construct work programmes and the project in particular.

To continue the development and enhancement of our cultural diversity, three areas of work will be implemented.

Baie-Mahault was a candidate for the fourth “UCLG Mexico City – Culture 21 International Award” (November 2019 – May 2020). The jury for the award drew up its final report in June of 2020, and requested that the Committee on Culture promote this project as one of the good practices to be implemented through Agenda 21 for culture, and as a special mention of the fourth edition of the Award. 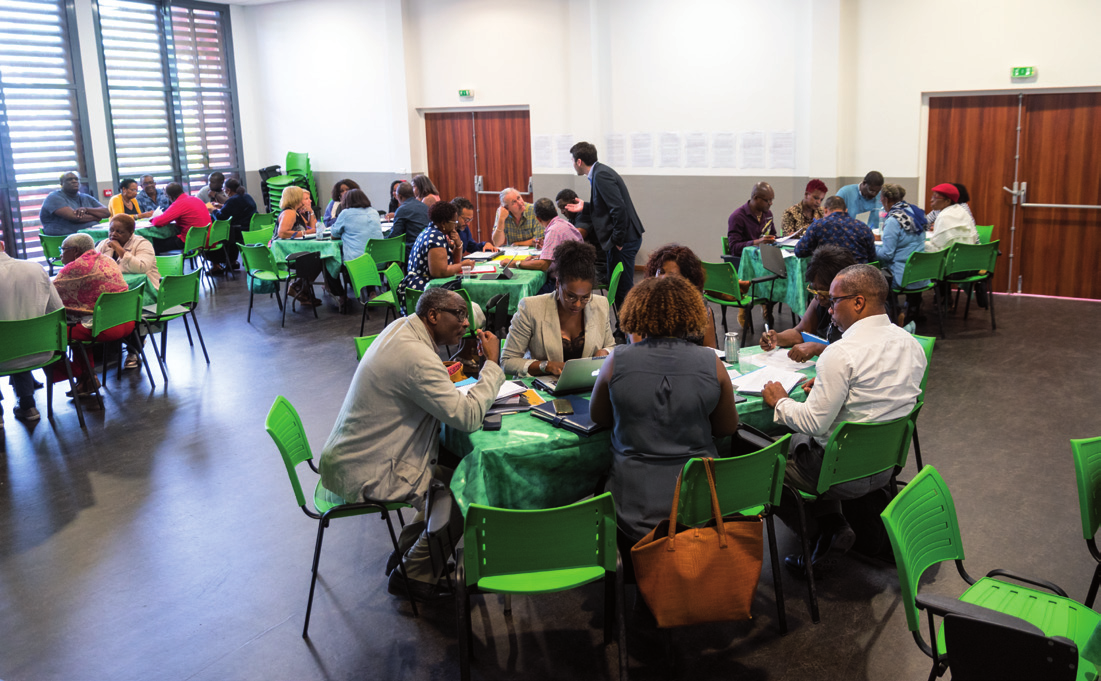