Terrassa is a city with an intense and diverse cultural life across all areas of creation and arts. It also has a wide range of cultural facilities, as well as a strong networking culture, an extensive schedule of popular and traditional festivals, and a rich cultural and architectural heritage.

In 2015, the “White Paper on Culture” was published, setting out five fundamental pillars for the city’s cultural policy: becoming a cultural capital and promotion, connectivity, social cohesion, governance, and both creativity and innovation.

The approach of making Terrassa a cultural capital through city promotion is outlined in the White Paper on Culture. It emphasises the fact that architectural heritage must bear the weight of this initiative. Since the twentieth century, the city has made a significant eort in this area and has devoted many resources to the preservation and revitalisation of the entire Episcopal See of Egara, declared a National Historic and Artistic Monument (1931) and named a National Cultural Heritage Site (1985).

The road map for Terrassa’s arts and culture comes from the White Paper, which influenced the potential of the complex and its path to becoming a candidate as a UNESCO World Heritage Site. For this reason, the Terrassa City Council continued to safeguard the city’s architectural heritage to achieve greater citizen involvement and subsequently, help promote the city.

The objective is the appropriate presentation, communication and interpretation of the See of Egara, in all its cultural and heritage aspects, to the society of the 21st century.

The city of Terrassa is a Pilot City of Agenda 21 for culture. With respect to the commitments made under Culture 21 Actions, the Terrassa City Council has promoted concrete measures to support heritage, diversity, and creativity as constituent parts of cultural life, such as the holding of cultural activities in the See of Egara to promote encounters between dierent population groups, the protection of heritage in its tangible and intangible dimension, and the promotion of scientific culture and its interaction with local history and everyday life.

Terrassa participates in the configuration and implementation of the New Urban Agenda and is a direct member of UCLG. It should also be noted that the See of Egara has received the “Biosphere Destination Seal”, which adapts the 17 UN SDGs to tourism, thus demonstrating its commitment to the sustainable management of its activities, adopting commitments aimed at preventing, eliminating or reducing the impact of its facilities and activities, as well as optimising sustainability by improving its behaviour towards the environment.

On the other hand, it is worth noting that cultural heritage is a major resource for the socio-economic development of the city, fostering local production and job creation (SDG 8 target 3).

The main objective of the project is the appropriate presentation, communication, and interpretation of the cultural and heritage value of the Episcopal See of Egara in today’s world. The project was spearheaded by the Terrassa City Council, the Archdiocese of Terrassa, and the Government of Catalonia as part of a global, inclusive way to draw attention to the development of the site.

The project, led by the City Council, the archbishopric of Barcelona and the Generalitat de CDatalunya, is based on a global and integrated concept for the development of the monument.

Goal 1. Ensure dialogue and social use of the site. Create a new public space for the city.

Goal 1. Use the strategic characteristics of the site and its area to turn it into a cultural icon and a key part of the city’s identity.

Goal 2. Create awareness of the monument among citizens.

Goal 3. Ensure a balanced and respectful relationship between the liturgical and cultural uses of the site.

The cultural organisations of Terrassa have always been at the forefront in terms of the conservation and external projection of the city's heritage by transforming cultural facilities into important centres for events, or by comining the values of arts and music.

The project has made the Episcopal See of Egara a key part of the city’s cultural cohesion and has contributed greatly to promoting the city.

With respect to the population, there was a marked change in community empowerment through participation in cultural initiatives carried out at the See of Egara. There was also a significant improvement in local perceptions of identity, strengthening senses of belonging, and the outward image the city projects. It should be emphasised that the cultural organisations of Terrassa have always been at the forefront in terms of the conservation and external projection of the city’s heritage by transforming cultural facilities into key event centres, or by combining the values of art and music. These are heritage-related initiatives that, instead of anchoring cities in their past, transform them into a beautiful place for cultural exchange that also brightens the city’s image.

Between 2004 and 2012 the project received numerous awards and mentions thanks to the work carried out on the Vallparadís Footbridge, the exterior, the Church of Santa Maria, the Rectory Building and its museology.

Once the project was completed, the Terrassa City Council launched the initiative to nominate the Episcopal See of Egara to be UNESCO World Heritage. The aim was to use the process to start a new era in the city’s vibrant cultural life. Since the complex was included on the Tentative List of World Heritage Sites in February 2019, the municipal council has been working on implementing the measures covered in the Episcopal See of Egara World Heritage Nomination Project to lend visibility to the site, thereby promoting local identity, a sense of pride and belonging, and intergenerational exchange. The project outlines seven areas of action:

Terrassa was nominated for the fourth edition of the International Award UCLG - Mexico City - Culture 21 (November 2019–May 2020). The Jury of the Award produced its final report in June 2020 and requested that the UCLG Committee on Culture promote this project as one of the good practices for the implementation of the Agenda 21 for culture.

This article was written by Joan Chicón Vallejo, Director of the European and International Relations Department of Terrassa, Catalonia, Spain. 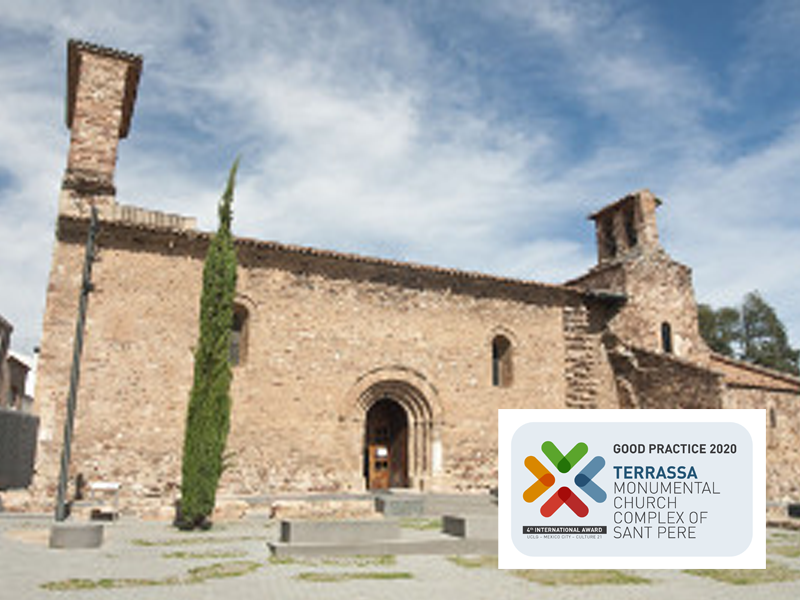