Surakarta City, or more commonly known as Solo City, is the centre of cultural development from the Mataram era to the present. Solo is the birthplace of drama art, which later became better known as “Wayang Orang” and spread throughout the archipelago. Within this city, there are many artists, art performers and communities who are passionately contributing to cultural conservation through arts, such as performances, traditional dances, sculptures, paintings, and poetry. Solo was chosen as the place to implement the project because of the large variety of cultures and artistic expressions that could inspire the participating artists.

The City of Surakarta’s vision is to develop a city of culture, independence, growth, and prosperity and is committed to building the city by considering existing culture and arts as well as their development. Hallasan Urban Play is an effort to create a culture-based development by providing an opportunity for artists to create an installation in a public space that can interact directly with the community.

Hallasan Urban Play was initiated after the second UCLG ASPAC Culture Forum by the Jeju Provincial Government and the Surakarta City Government as a form of friendly cooperation. The programme aims not only strengthen the friendship between to cities but also to reactivate the public space through local arts and to increase the exposure of local art form to society. The Hallasan Urban Play is an art installation that is used as a child playground, which leverages the Jaya Wijaya Park as a child-friendly space. This collaboration expected to be a symbol of friendship that has existed between Jeju Province and Solo City today and in the future.

Hallasan Urban Play is an effort to create a culture-based development by providing an opportunity for artists to create an installation in a public space that interact directly with the commnity.

The purpose of the Hallasan Urban Play is to provide engaging facilities for children to be able to play, by utilising art installations made by artists from Jeju Province and Surakarta City. Halla Mountain in Jeju inspires the general form of this art installation, which can also represent mountains around the city of Surakarta.

Hallasan Urban Play is a collaboration between artists in Jeju Province and Surakarta City that was based on observations made in several public spaces in the city of Surakarta and asks: Why all the game facilities are monotonous and unattractive? Can something more interesting be made by utilising local resources?

This was a challenge which was later answered by a design team consisting of several artists from different backgrounds. The team was then given direction by the Surakarta City Government to develop something in the Jayawijaya Park area and Mojosongo Village, Jebres District, Surakarta City. The selection of Taman Jayawijaya was driven by the fact that it was designated as a child-friendly park by the Surakarta City Government, and the Mojosongo area was the most populous region in Jebres District. Based on 2017 population data, the art installation will serve approximately 32,888 children.

The research and design were carried out in three phases:

The obstacles encountered in the process of developing Hallasan Urban Play were principally related to coordination and design communication between team members.

The government of Jeju Province and the Surakarta City Government have increasingly deepened relations through exploring cooperation in the future. In particular, the Surakarta Government has increasingly paid attention to the importance of the quality of existing public spaces, while the artists have become more open to future collaborations.

Surakarta City increasingly appreciates the value that culture brings to the city and the ways in which it can create jobs and incomes. Citizens have also experienced the value of culture in their daily life, and the a cross-culture interaction will build understanding and prevent from social conflict.

The Surakarta government has increasingly paid attention to the importance of the quality of existing public spaces, while the artists have become more open to future collaborations.

From December 2019 to January 2020, there was a significant increase in visitors to Taman Jayawijaya, especially children.

There has not yet been an evaluation. It is planned that the evaluation will be carried out jointly, but the conditions are not yet possible. A temporary evaluation can be done to measure the visit to Taman Jayawijaya.

Surakarta was a candidate for the third “UCLG Mexico City – Culture 21 International Award” (November 2019 – May 2020). The jury for the award drew up its final report in July of 2020, and requested that the Committee on Culture promote this project as one of the good practices to be implemented through Agenda 21 for culture.

This article was written by Rini Indriyani, Head of International Cooperation the City of Surakarta, Indonesia and David A. Sagita (Public Space Specialist, UCLG ASPAC 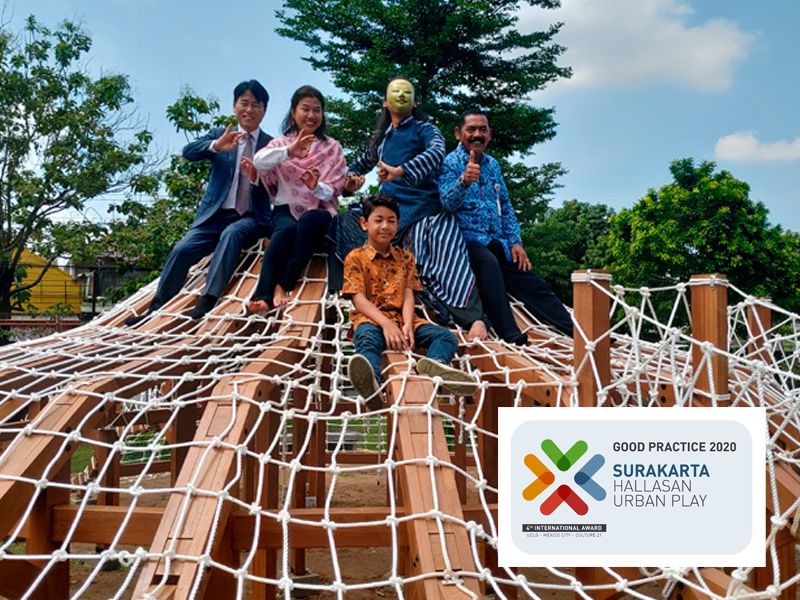