La Paz, seat of the Bolivian Government, is located in the Andean region of the country, at 3600 metres above sea level, making it one of the highest cities in the world. Other than being an administrative political centre, it is also known for its intense economic and commercial activity. One of the city's main characteristic is the fact that it is home to people from throughout Bolivia. As a result it is the largest Andean city in the region. Its unique landscape makes it an important tourist destination.

At the heart of the ancestral, Indigenous Aymara world, its festivals have transcended all levels and sectors of society. Until 2000, the city lacked a meeting place where citizens could strengthen cultural art initiatives through innovative ideas. In response to the need for an adequate space in the supply and demand of cultural services, the first cultural market was established. It addressed the need to invest in cultures for the comprehensive development of the society.

This fair is held 32 Sundays out of the year in the city centre on Avenida 16 de Julio, also known as the Paseo de El Prado. Its guiding principles focus on intercultural dialogue, citizen participation, accessibility to arts and culture for people in every part of society, high quality service, decentralisation, democratisation, involvement, and entrepreneurial spirit.

Among other responsibilities, the autonomous municipal government has the ability to formulate and implement policies for the protection, conservation, recovery, safekeeping, and promoting municipal cultural heritage. It also oversees research and practices in arts and culture, in addition to "creating meeting spaces and infrastructure for carrying out artistic and cultural activities".

The Sunday Cultures Fair also interprets the guiding principles of Agenda 21 for culture (A21C), promoting the active relationship between citizens, culture, and sustainable development. It has made it possible for citizens to have free access to a wide range of cultural activities and expressions carried out by the municipality, in line with the policies set out and agreed upon in A21C. This line of action is defined by the public reclaiming ownership over public spaces. As a result, cultural managers and stakeholders count on the media to show their work to a broad, diverse, and growing public.

The Sunday Cultures Fair therefore establishes the conditions for democratic and inclusive participation, strengthening cultural exchange, promoting intercultural dialogue, and, through new policies on cultural inclusion and entrepreneurship, the internationalisation of many cultural events that take place there.

THE PROJECT WAS BORN OUT OF A NEED TO DEMOCRATISE PUBLIC ACCESS TO LOCALLY PRODUCED CULTURAL EXPRESSIONS AND EVENTS, SUCH AS THROUGH THE RECOVERY OF URBAN PUBLIC SPACES FOR USE, HEALTHY RECREATION, AND COMMUNITY ENJOYMENT BY CITIZENS.

There are 8 main stages that host scheduled performances by dance and music groups in a number of genres, as well as visual arts, literature, and other fields each with dedicated areas. Age groups: For seniors, youth, children, and adolescents; Artistic/Cultural Activities: Popular, visual, and literary arts and crafts; artistic-cultural products and cultural entrepreneurs, including in gastronomy, who seek the development of the creative and cultural industries. Specialised areas such as the Citizens' Initiatives space; a space for Organisations with participation from other municipal government departments, from invited associations, as well as those advocating the social advancement, health, and cultural action.

Not only do these spaces foster citizen participation, but they also encourage diverse expressions in cultural managers, creating an interactive relationship among municipal government, citizens, artists and/or managers, in which all parties are geared towards focusing special attention upon vulnerable people and groups. Due to the high rate of violence against women, interinstitutional campaigns have been bolstered at these fairs in order to combat gender discrimination. The fair also relies upon spaces promoting cultural diversity, as well as the protection of tangible and intangible heritage. It also includes open-air activities like the art gallery and the environmental space.

It has developed strategic alliances in many areas of participation. These include private entities with social services and training spaces for entrepreneurial spirit or independent groups of artists. National, departmental, and municipal governments are included in this initiative, as well as governmental and non-governmental organisations that manage education, health, security, environment, parks, tourism, and other important fields.

The target population includes people from 4 to 80 years of age or more, and focuses upon the importance of family every Sunday. A population of such cultural, social, and economic diversity must have access to a free and wide range of cultural offerings. Currently, this cultural event has reached about 10,000 visitors each Sunday.

The project's most important impacts are the sustained increase in public attendance, the subsequent adoption of new spaces, the interaction of different municipal policies in the areas of social and cultural development, a platform for the visibility of other municipal social policies, as well as the significant promotion of other public and private institutional initiatives.

It has become a meeting point for inhabitants of the city and greater municipality. The project represents a coherent reclamation of the city centre where it is possible to learn and enjoy arts and culture. Simultaneously, it has opened up opportunities to appreciate or discover unknown or fringe forms of expression. Due to the fair, these can even be de-stigmatised through the experience.

The Sunday Cultures Fair has reported significant progress in the exercise of citizens' rights, which has resulted in the inclusion of all sectors of society as well as respect for cultural, gender, and other types of diversity.

Participative mechanisms for gauging perceptions were designed and used throughout the 3 cultural workshops carried out in 2015. Cultural actors who attended these expressed their opinions through a survey on the City of La Paz and its cultural management. Participants evaluated two aspects of the Sunday Cultures Fair: Social impact, and organisation. The social impact of the fair received a high score, with 64.6% positive responses, while its organisation received 49.7%, thus making it a valuable cultural activity in the city.

The Survey on Perception of Culture(s) and Cultural Heritage was carried out in the city's seven major urban districts. Out of a population of 884,003 and a sample of 3360 people over the age of 18, the fair was compared with other important events and received a 56.55% in "good" responses.

THE FAIR HAS REPORTED SIGNIFICANT PROGRESS IN THE EXERCISE OF CITIZENS' RIGHTS, THE INCLUSION OF ALL SECTORS OF SOCIETY AS WELL AS RESPECT FOR CULTURAL, GENDER, AND OTHER TYPES OF DIVERSITY.

As seen throughout the 16 year history of its implementation, one of the most important factors in cultural management for the City of La Paz is, specifically, its continuity. However, continuity does not mean stagnation. As a result it is important that the initiative is constantly reinventing itself to move forward.

The City of La Paz was a candidate for the second International Award "UCLG – Mexico City – Culture 21” (January - May of 2016). The jury for the award drew up its final report in June of 2016, and requested that the Committee on Culture promote this project as one of the good practices to be implemented through Agenda 21 for culture. 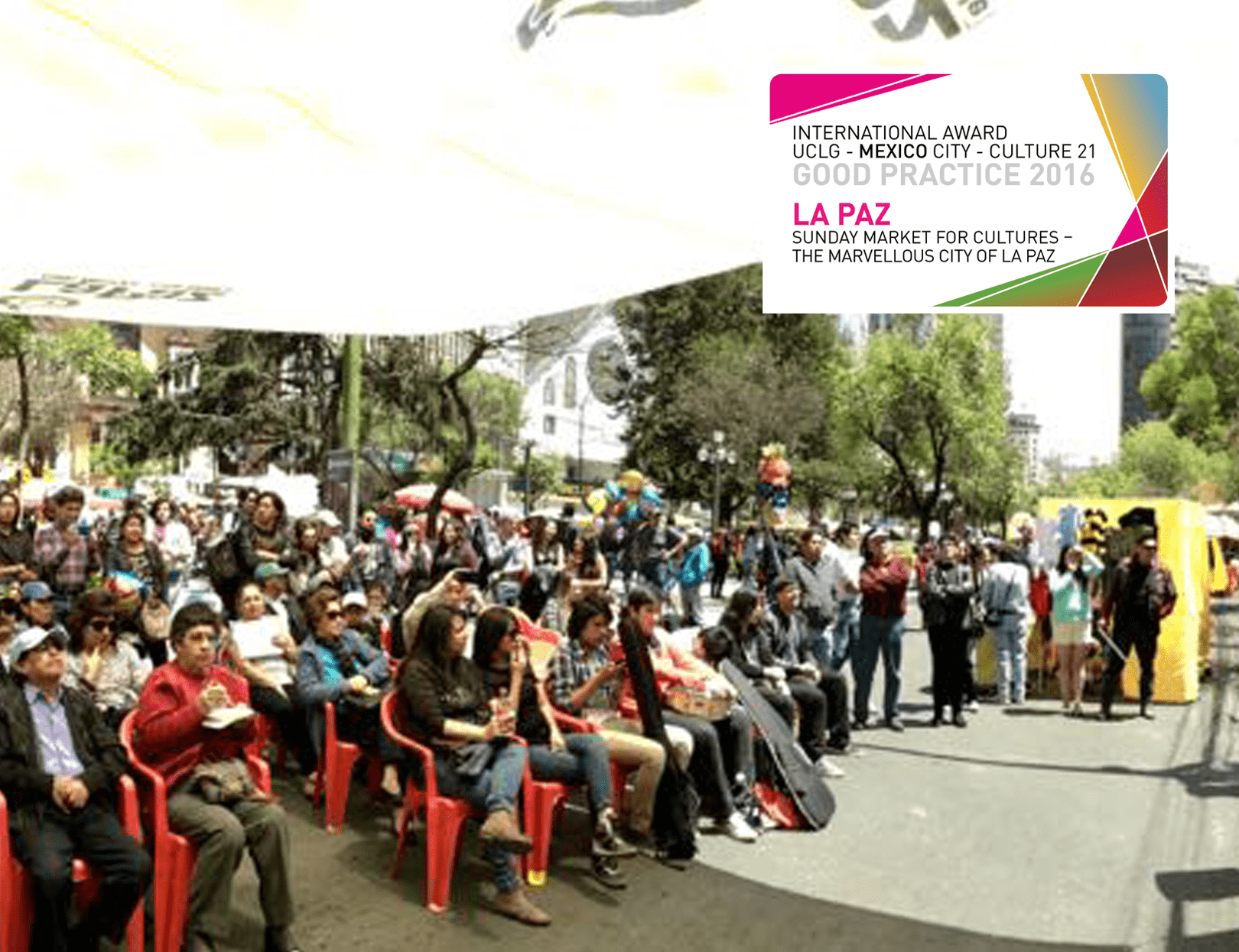