Strengthening, safeguarding, developing, and promoting cultures and the arts

Bolivia is a multicultural and multilingual country, and the city of La Paz is one of its richest expressions of cultural diversity. The city is home to different traditions of Indigenous ethnic groups: Aymara, people of African descent, and mixed ethnicities with their unique world views, customs, heritages, languages, and beliefs. The confluence of all of these has given city of La Paz its own distinct character. Home to about 790,000 people, the city is the third-most populous in the country. As a result, it is a place where many different cultures and stories intertwine, where social groups and different generations from other cities and departments come together. The city of La Paz has therefore become a centre for diversity, a melting pot for Bolivian culture, and a guarantor of national unity.

The municipality of La Paz has promoted ongoing cultural management for over 16 years. This led to the implementation of a series of good practices on institutional strengthening, democratization, cultural decentralization, and valuing heritage. Together, the process laid the foundations for adopting culture as the fourth pillar of sustainable development, an undeniable benchmark for the whole country.

Under the auspices of the 2040 Municipal Strategic Plan "The City of La Paz That We Want", the Autonomous Municipal Government of La Paz (GAMLP) has focused on the importance of mainstreaming cultures and the arts in the self-determined, equitable, just, and participatory construction of a shared future and better living conditions for all people in La Paz. In order to achieve this, specific policies were developed to promote intercultural dialogue, safeguard and value collective memory expressed through tangible and intangible heritage, encourage the growth of new talent, and democratize access to culture and the arts for creators, performers, and the community as a whole.

After a participatory process of institutionalizing culture in the city of La Paz, Autonomous Municipal Law No. 265 "On Strengthening, Safeguarding, Developing, and Promoting Cultures and the Arts" was promoted. Its objective is to establish the rights and obligations for individuals, groups, and communities in the fields of culture and the arts in La Paz.

The initiative began in 2005 when the GAMLP, then referred to as the La Paz Culture Office, organized the First Cultural Conference. The event was both an institutionalized space for citizen participation and a gauge for the status of culture in the city. The aim was to provide spaces necessary for the democratized, decentralized co-management of culture as the fourth pillar of sustainable development, as well as to give legal support to cultural and artistic expressions that are developed and managed in the city.

The cultural days in 2005 laid the foundations for understanding culture as the 4th pillar of sustainable development, establishing the city's commitment to adopting Agenda 21 for culture.

Article III of the Municipal Law of Cultures establishes the "Basis for Municipal Cultural Policies", and in Section 7 states the importance of culture as the fourth pillar of sustainable development. This helps ensure that the development planning, operational programming, and public policies carried out by the GAMLP must address the need for an intercultural approach. Additionally, it outlines the fact that the GAMLP will ensure overlap between cultural and social, economic, educational, environmental, and urban public policies. These policies will frame the field of culture as an instrument for social transformation and for improving quality of life while ensuring sustainable development and comprehensive human development. Furthermore, the law will deepen local processes of social cohesion, as well as facilitate integration and interaction with local governments and other actors at the national and international levels.

The main goal of the project is to strengthen and lend visibility to culture as the fourth pillar of sustainable development through the democratization and decentralization of participation by cultural actors and citizens. This would influence the co-managed development of the Law, and guidelines for the Strategic Cultural Plan in La Paz.

Cultural Days: Three Cultural Days were held annually from 2005 to 2015, with the purpose of establishing a participatory and proactive space for dialogue, discussion, coordination, and proposals on prioritizing projects and programmes geared towards implementing municipal cultural policies over the five-year period from 2015 to 2020.

One notable achievement took place on the last day in 2015, when the Citizens' Council for Arts and Culture Planning (CONCIPCULTA), was transformed into the main counterpart and interlocutor for planning and developing cultural policies in La Paz.

Participatory Development of the Law: This was achieved through participation with CONCIPCULTA, the institutional representation for the sectors elected during the Cultural Days; the Telartes Network (National Cultural Actors Network), with input from the results of the national culture congresses of 2016 and 2015; and the Living Community Culture Network thanks to Latin American activist movements around culture. Furthermore, the law was created under the leadership of the Autonomous Municipal Government through representatives from the Municipal Council and the Municipal Department of Cultures.

Enacting the Law: This participatory process helped influence the legislative and executive levels of the GAMLP to prioritize strengthening public policies (social, economic, educational, environmental and urban planning) and subsequently adopt cultural development as a fundamental instrument for social transformation and as a fourth pillar for comprehensive sustainable human development. In December 2017, the first Autonomous Municipal Law No. 265 “on Strengthening, Safeguarding, Developing, and Promoting Cultures and the Arts” was enacted.

Socialization of the Law: Currently, the GAMLP is in a process of socialization and legislative development for Autonomous Municipal Law No 265. This will involve the joint participation of those actors involved in drafting the Law.

Implementation of the Law: Development of the city’s Strategic Cultural Plan could be foreseen in the congresses, meetings, and citizen participation events held, as well as in the creation of an observatory on culture, which will make it possible to implement the cultural policies outlined in the Law.

Autonomous municipal Law 265 was developed using a consensus proposal and the involvement of diverse actors in drafting a framework document to be considered by the executive and legislative bodies of the government of La Paz.

The following are some of the governments involved with this initiative.

Thanks to a change in perspective on the value of culture, this initiative by the Municipal Autonomous Government of La Paz (GAMLP) has allowed the city to have a Municipal Strategic Cultural Plan based on a participatory process and legislation (Law and Regulation) that promote, safeguard, develop, and promote culture and the arts.

Culture has been institutionalized and made a visible fourth pillar of sustainable development in the city of La Paz.

The population can exercise their cultural rights while embracing their identities, thereby strengthening intercultural dialogue, and helping bolster recognition of different cultural statements and expressions.

The fourth annual Cultural Days are planned to be held in December 2019, which will aim to ensure the regulation of the Law and the city’s Strategic Cultural Plan. Furthermore, the initial implementation of the observatory on culture will be carried out. This will help provide data and background on citizens’ cultural consumption, as well as on the impacts of carrying out these actions.

One significant result of the initiative has been a change in the perspective on culture. Where culture was once seen as merely synonymous with artistic expression, it is now understood to be the transformative social and economic core of human development.

In today’s world, the cultural identities of developing countries are under constant threat by the processes of economic and cultural globalization through the influence of "mass culture", and an influx of values and practices from developed countries. This has resulted in the build-up and imposition of foreign development models on the cradles of culture and identity.

As a result, the implementation of cultural policies based on sustainable development is key. This is especially true in cities like La Paz, which has one of the richest examples of cultural diversity nourished by different traditions from Indigenous groups including the Aymara, people of African descent, and mixed groups. Their particular world views, customs, heritages, languages, and beliefs all cumulatively form the city’s identity.

This is an ongoing initiative, and it has yet to implement the following actions:

One key factor has been the implementation of cultural policies based on sustainable development, as well as the rich expressions of cultural diversity in La Paz, nourished by different traditions from indigenous groups.

La Paz was a candidate for the third "UCLG Mexico City – Culture 21 International Award" (November 2017 - May of 2018). The jury for the award drew up its final report in June of 2018, and requested that the Committee on Culture promote this project as one of the good practices to be implemented through Agenda 21 for culture.

This article was written by Darío Andrés Zaratti Chevarría, Municipal Secretary of Cultures for the Autonomous Municipal Government of La Paz, Murillo, Bolivia. 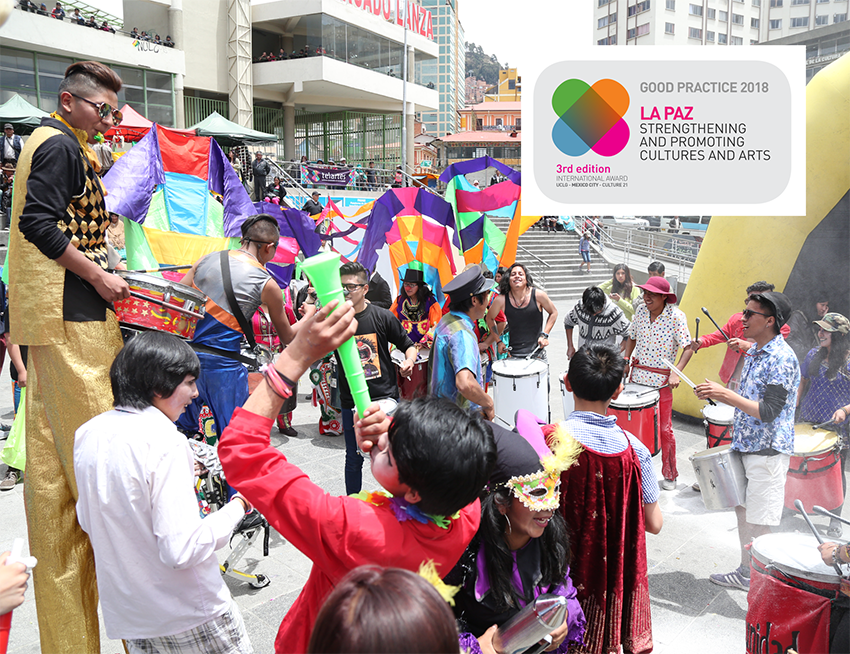