Solo, the Spirit of Java

Surakarta, known as Solo City, is in the Central Java Province of Indonesia. The city is a "melting pot" of ethnic (Arab, China, India, etc.) and religious (Muslims, Christians, Buddhist, Hindu, etc.) diversity. In this unique society, the people live in harmony. Solo is known as the center of traditional Javanese culture and heritage. It is the only area where traditional weddings are still celebrated. The true uniqueness of Solo is how well preserved and diffused Javanese heritage is in the daily life of citizens. Yearly, over 20 major events take place to celebrate Javanese culture.

Ten years ago, the city’s main problem was the poorly managed traditional markets and street vendors, in addition to insufficient or insecure jobs, loss of public space, and low quality of basic service provision. The overall development policy of the city is towards building a society for people where they have proper education, good health, food sufficiency, and an ideal place for living, achieved through tourism, culture, sport, trade, and service. Resulting from this, culture became more visible in Solo and activities centred on culture soared as people widely accepted and supported initiatives.

The initiative aims to revive the image of Solo as a cultural city and the centre of culture and arts in Indonesia by conserving javanese cultural assets, both tangible and intangible.

Solo’s cultural policies, since the launch of the “Solo, the spirit of Java” in 2007, have been widely oriented towards education and efforts to integrate culture in every aspect of public life.

Solo also encourages informal expressions of art and culture, by supporting street artists and various cultural communities, or dedicating public spaces for free cultural expression and performances. Aside from intangible cultural assets, Solo works on protecting tangible cultural heritage. Over 200 properties have been identified and placed under Cultural Property national law. The strength of Solo’s cultural policies is to focus on ensuring that culture remains in the daily life of people. Moreover, Solo has worked to boost its national and international recognition as a centre of culture and traditional arts hoping to attract visitors.

The cultural policies in Solo correspond to the call for commitment of local governments to Agenda 21 for culture (A21C), and demonstrate the actions that Solo is already implementing. Solo’s cultural branding influences aspects of local governance beyond the culture department. This can be seen in the following aspects of the initiative:

The initiative aims to revive the image of Solo as a cultural city, and the centre of culture and arts in Indonesia. It encompasses a mix of policies, projects and other initiatives of the local government, which aim to conserve Javanese cultural assets, both tangible and intangible.

The overall development policy of the city is towards building a society for people where they have proper education, good health, food sufficiency and an ideal place for living, achieved through tourism, culture, sport, trade and service.

Solo collaborates with government offices, NGOs, and civil society groups within the city and with national and international actors to create the brand. Local artists’ communities are also being heard to take into account their needs and requests. Through its cultural policy, the city aspires to be part of an international network of inspiring cities.

The cultural regulations and projects implemented by Solo have affected all levels of the population, and generally, have delivered benefits in different forms. Beyond this, youth and children of Solo are also first-hand beneficiary of cultural efforts. By raising awareness and introducing them early on to traditional performing arts, children become a medium to educate the whole population.

Through its cultural policy, the city aspires to be part of an international network of inspiring cities.

The project generated revenue for the city through increased tourism and better management of the more than 25 traditional markets. This profit allowed the city to grow its number of civil servants in all departments, especially in the culture department. It enabled a virtuous cycle of stable. Consequently, this has translated to improvement of public services, contributed to developing cultural infrastructures and programs, and strengthened local government capacity and collaboration.

The policy contributed to the recognition and preservation of various forms or expressions of art and culture, previously not on the spotlight and therefore at risk of being weakened. Traditional cultural performers (theatre, dance, music) and artisans, as well as street artists are highly valued and supported by the city’s policy.

In terms of tangible impact, the restoration and revitalization of some public spaces and other infrastructure (markets, park, government buildings, etc.) have been patronized by the citizens and made the city more active and engaging. This includes the preservation of heritage buildings and structures such as the palaces, as well as venues for performances. The policy also contributed to economic growth in the city through tourism, the organisation of international cultural events and other activities (increasing revenue and using this to improve public service).

Harder to measure in quantitative terms is the social impacts, but positive assessment prevails owing to the public acceptance and appreciation of the policies. This is evidence to the city encouraging citizens to uphold their cultural and human right of expression. Through good maintenance of heritage sites and revitalisation of green areas, the city encouraged better “eco awareness” amongst its citizens, who are now more inclined to respect and protect their environmental heritage. The renovation of the numerous traditional markets, into clean and hygienic facilities also improved health standards.

Through good maintenance of heritage sites and revitalisation of green areas, the city indirectly encouraged better “eco-awarness” among its citizens, who are now more inclined to respect and protect the integrity of their environmental heritage.

The city of Solo was a nominated candidate for the second 'UCLG International Award – Mexico City – Culture 21' (January – May 2016). The awards jury produced a final report in June 2016 and asked the UCLG Committee on Culture to promote this project as a practical example for the implementation of Agenda 21 for Culture.

This factsheet was put together by Eny Tiyasni Susana, Head of Culture and Tourism Department, Central Java, Indonesia. 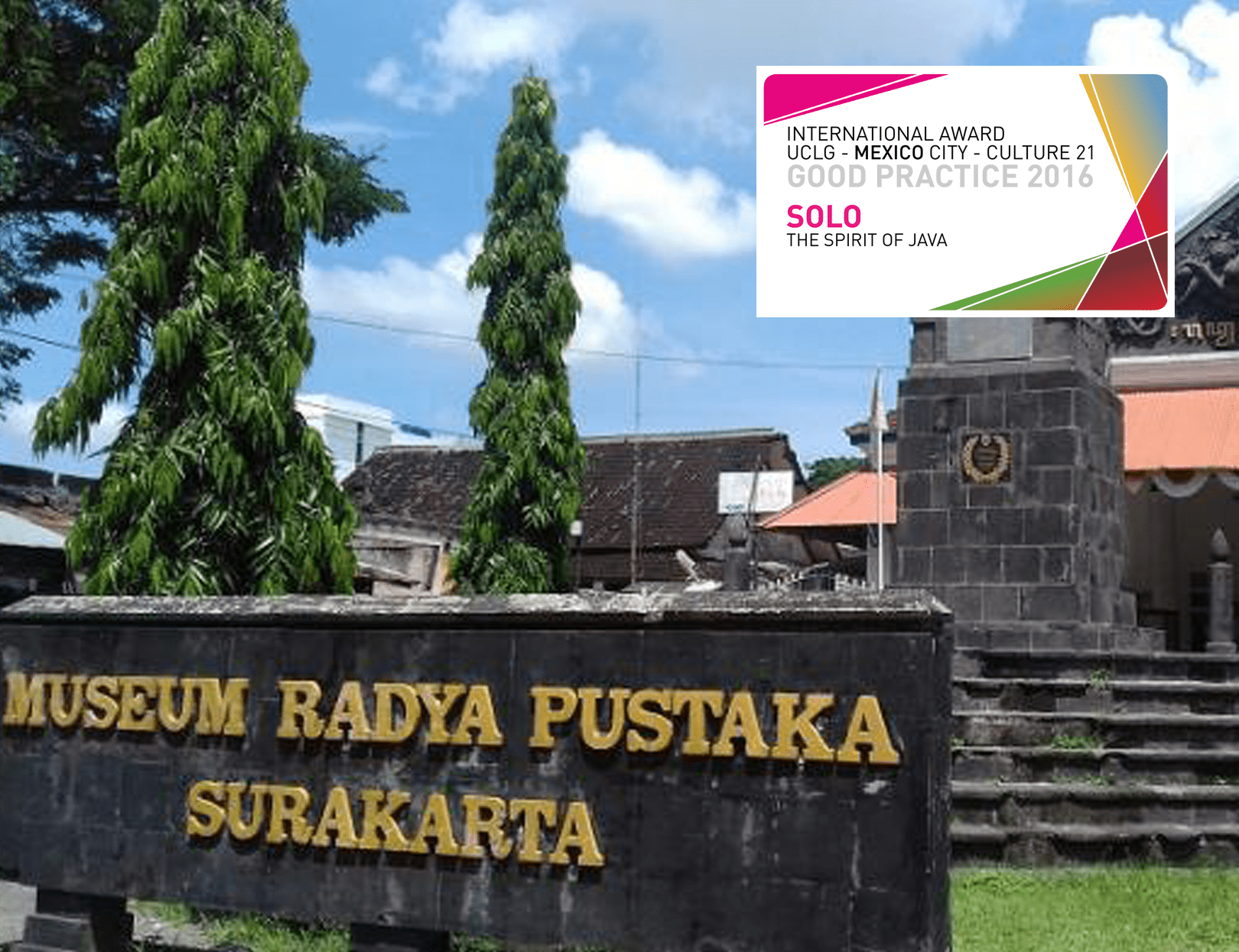