Lugo is a municipality in Spain, and capital city of the district and province of the same name. It is situated in the northwest part of the country, in the autonomous community of Galicia. It boasts the title of The Most Noble and Loyal City. The city was founded by the Romans, between 15-13 A.C. by Paullus Fabius Maximus and is the oldest city in Galicia. Its numerous Roman ruins, many of which are preserved in the Provincial Museum, are a testimony to its long history. In particular, its Roman wall was declared a UNESCO World Heritage Site in 2000.

The city is in the mountain area of the Alto Minho region and surrounded by the river lands of the Minho River. The municipality, included in the Biosphere Reserve comprised of the Minho's upper course, is the second largest in Galicia, with a population of 98,134 as of 2016.

In order to highlight its extensive Roman history, over two kilometres of the Roman wall have been preserved, which has subsequently become a hallmark of the city. This was recognised by UNESCO in 2000 through is inscription on the list of World Heritage Sites. Lugo is a living museum, where its iconic Roman past exists in every corner of the city. The increase in archaeological excavations carried out in recent years has unearthed more of its rich archaeological heritage, including thermae, mosaics, aqueducts, and sewer systems. Aware of the importance and historical value of these, the city of Lugo has undertaken significant efforts to recover and promote its heritage. It has established a number of archaeological centres and landmarks as glimpses of history. This is one of its greatest challenges, in that the city's plan for the future relies heavily on recovering its rich past.

THE AIM OF THE FESTIVAL IS TO RELIVE THE CITY'S ROMAN PAST BY COMBINING LEISURE AND CULTURE TO SPREAD, REGAIN, AND RE-ESTABLISH THE VALUE OF ITS CULTURAL AND HISTORICAL HERITAGE.

One of the core focuses of cultural policies in Lugo is the value of its Roman past. The aim of the "ROME IN LUGO – ARDE LVCVS (BURN LUGO)" programme, is to achieve a number of objectives and commitments from Agenda 21 for culture, including:

The aim of the Arde Lvcvs festival is to relive the city's Roman past by combining leisure and culture to spread, regain, and re-establish the value of its cultural and historical heritage. In turn, it seeks to fortify its distinguishing characteristics through history and social memory, so that they stimulate cultural development in a city that has rediscovered its value.

The project is a collaboration among a number of civil society entities and organisations with the aim of achieving participation by institutions throughout society. The whole of the education community will be involved in developing this event in order to give youth their own spaces and to help them discover their city's cultural and historical past. Collaborations among 13 associations were established to achieve this. Cooperation also exists with the business sector. This includes hospitality, trade and services, transport and logistics, beauty and personal care, art and culture, graphic arts, computer sciences and internet services, as well as cultural events and services in order to revitalise and promote the city's business community.

Agreements have also been made with the Regional Government (Autonomous Community of Galicia) in carrying out four employment workshops in recent years for valuing cultural and historical heritage. The "LUGO 10" project, aimed at spreading knowledge about the Roman wall was carried out from 2010-2011, along with the National Administration (Ministry of Culture).

VALUING ARCHAEOLOGICAL RUINS IS ONE OF THE GREATEST CHALLENGES FACED BY THE CITY, IN THAT ITS PLAN FOR THE FUTURE RELIES HEAVILY ON RECOVERING ITS RICH PAST.

The Arde Lvcvs festival is geared towards the public. This includes a number of groups such as school children, by making traditional garments; youth from the city that create different associations that carry out activities in preparation for the festival; citizens of all ages who form a part of a number of associations; families who prepare their garments throughout the year in order to participate in the festival; associations of different type of integration that are involved in the festival; and various companies from around the city, particularly from the hospitality, or beauty and personal care industries.

The local government has maintained the programme since 1999. It has followed this political line and, since the first Arde Lvcvs festival in 2001, has increasingly emphasised better promotion and diffusion of the city's Roman legacy.

Involvement in the cultural aspect of the festival by groups from around the city has gradually risen.

In addition to its impact on culture, the Roman festival has seen quite a significant increase in visitors from all walks of life. The festival is held annually and coincides with the weekend closest to the summer solstice, which greatly contributes to tourism. The latter has increased 92% since the year 2000.

THE PROGRAMME ENSURES PARTICIPATION FOR ALL CITIZENS, FREE OF PREJUDICE, AS WELL AS A COMMITMENT TO IMPLEMENT MEANS FOR IMMIGRANT GROUPS TO ACCESS AND PARTICIPATE IN CULTURAL LIFE.

The City of Lugo was a candidate for the second "UCLG Mexico City – Culture 21 International Award" (January - May of 2016). The jury for the award drew up its final report in June of 2016, and requested that the Committee on Culture promote this project as one of the good practices to be implemented through Agenda 21 for culture. 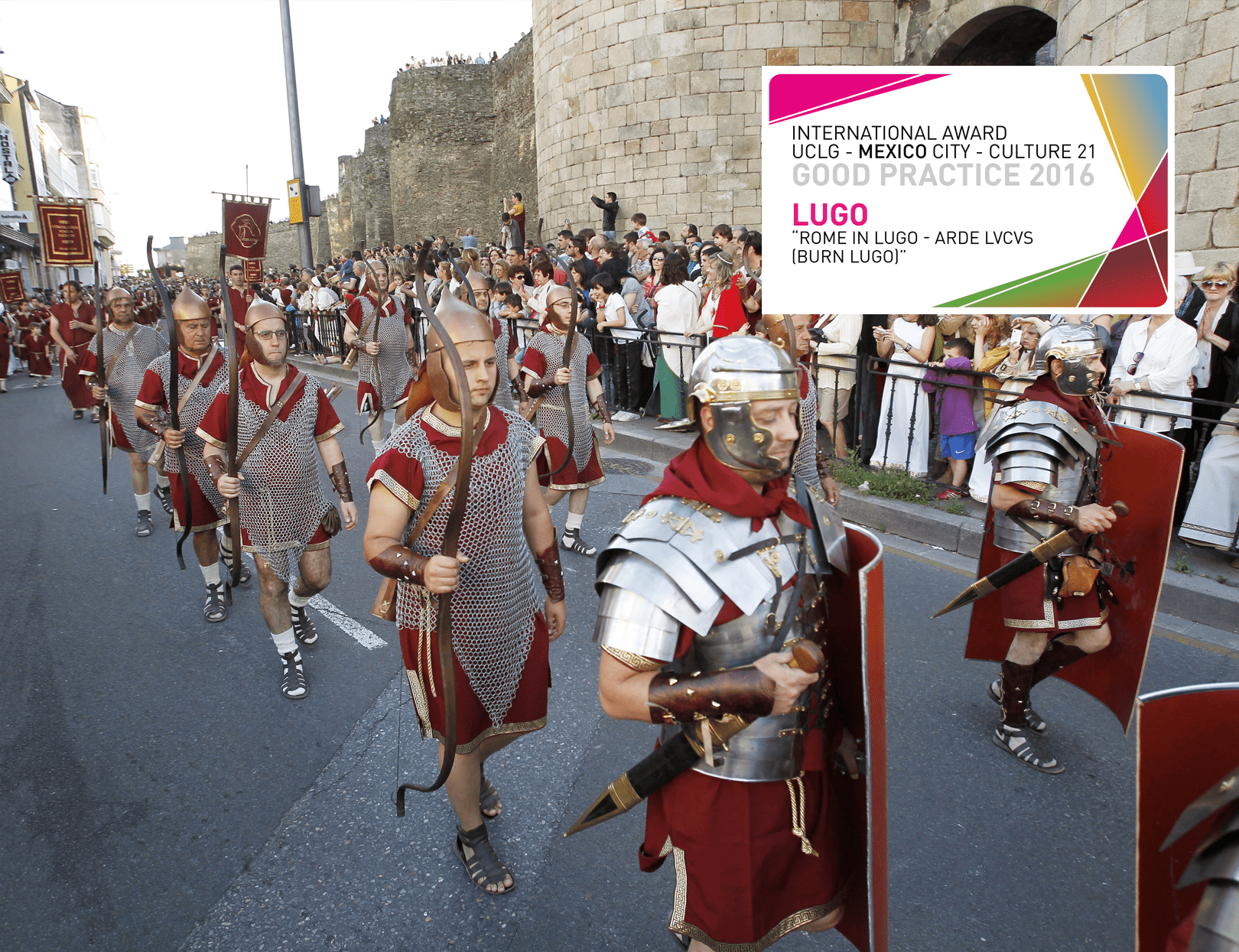