Lac-Mégantic is the central town of the Regional County Municipality (RCM) of Le Granit, located in the far southeast part of the Estrie region. It is 250 kilometres from Montreal, 185 kilometres from Quebec, and close to the United States border. The region boasts the oldest archaeological site in the Northeast region, as well as the Mont-Mégantic International Dark Sky Reserve. Lac-Mégantic is home to about 6000 of the RCM's total 22,000 inhabitants, an area of 2,733.3 square kilometres.

In the early morning of July 6, 2013, the community of Lac-Mégantic was hit by a disaster involving the derailment and explosion of a crude oil freight train that killed 47 people and led to the destruction of 30 buildings in its historic town centre, and 36 more that were later demolished. As a result of this tragedy, 27 children were orphaned from one or both parents, and the majority of the population lost a family member or at least one acquaintance. Several of the town centre's historical landmarks were also destroyed. As such, resilience was needed to bounce back by recreating places for meetings and discussions to break the isolation that many citizens felt, having shut themselves off from the town after the severe shock of the event. Thus, culture and citizen gatherings quickly became ways of offering people inner peace, hope, and comfort.

Before 2013, the city was already threatened by economic devitalization and a decline in the average household income. The 2013 tragedy established an overall awareness of the need to make both the town and the RCM more appealing. Culture has played an even more significant role in social cohesion, as evidenced by the massive level of community participation. Indeed, thanks to the initiative of committed citizens, the "Rebuild Lac-Mégantic" project immediately took shape, before gradually becoming a structured initiative further developed by municipality through the Office of Reconstruction.

The Third Cultural Policy of the RCM of Granit was adopted in 2010. It already outlined the important fact that "cultural growth is a driver of development and a way to improve our quality of life", encouraging artistic creation and citizen involvement at the regional level. That same year, the Arts, Culture and Heritage Commission (CACP) was created with the mandate to guide local government decisions on cultural development and to support cultural projects by regional artists. Since 1980, the town has also supported the Lac-Mégantic Cultural Committee, which organizes performances by national artists.

The rebuilding of Lac-Mégantic is part of the 2025 challenge to increase the population by then.

The main goal is to rebuild downtown Lac-Mégantic with a sustainable development approach that addresses the major development issues facing the city and its region through human, physical, social, environmental, and economic rebuilding. The specific objectives of the various initiatives include collective recovery, community healing, creating new living and meeting spaces, and the exchange of experiences and learning.

Eight months after the railway tragedy that struck the city in 2013, the "Reinventing the Town" programme was launched. This became the greatest process of citizen participation ever carried out in Quebec, involving information sessions, community workshops, brainstorming on urban planning, discussions around architecture and design, and much more. Ultimately, seven thematic conferences were held, including one on arts and culture. Furthermore, 15 public meetings were organised over 15 months, bringing together nearly 2,600 citizens. In March 2015, the 11 projects selected by the citizens were presented and prioritised during an assembly, and the Office of Reconstruction was created. Its 2015-2020 Action Plan sets out a vision for planned actions that will make the new downtown "a lively environment, with a human-based approach, generating community and economic activities in a green, sustainable environment". As a result, more than a hundred cultural and leisure projects have been carried out.

Several places affected by the tragedy have also resumed their activities, such as the Musi-Café Summer, which in 2013 scheduled nearly 24 free music shows over 45 days at open-air open stages, bringing together nearly 50,000 spectators. The following year, the Nelly-Arcan Media Library moved to a former textile factory thanks to the donation of 20,000 books. The former sawmill Billots Sélect will be refurbished into an innovative hub for youth and much more. In 2016, the inauguration of the new town centre was marked by numerous events including shows, music, the big Halloween parade, the creation of a public speaking space, a public piano, movie nights, and community gardens.

To commemorate those lost by the tragedy, the "Wind March" was held in the spring of 2014, and set up 47 wind chimes, representative of the 47 victims. The commemoration of the first anniversary of the event honoured local cultural traditions: seeding fish in the lake, planting a flower garden, and releasing hundreds of butterflies, symbolizing renewal. In the fall of 2015, 500 citizens participated in the co-creation of a theatre production called "A Big Hole in Our Stomach", produced by the Sherbrooke Petites Lanternes Theatre, bringing together 1,200 spectators over three performances. The Sainte-Agnès church, a heritage jewel spared by the tragedy, entered the spotlight at the end of 2015 when it was made a place for contemplation. In the summer of 2017, citizens organised as "Greeters" who volunteered to accompany tourists visiting the town. Finally, a place of remembrance is under construction at the centre of the tragedy, as a testament to the resilience of the inhabitants.

The town also hosted a series of events, such as:

Following these efforts, Lac-Mégantic became the first francophone city in the americas to receive its Cittaslow certification in 2017.

In 2017, during the Culture Days events, Lac-Mégantic launched its new city brand, "A city with an open heart". This presented a clear visual trademark that reflected the soul, the authenticity, and the life force of the revival from the community. A book was also published the same year to help others learn about the community.

Finally, through a partnership with Hydro-Quebec, in 2018 the town unveiled the first electric microgrid in Quebec, confirming its drive to become a leader in the energy transition in rural areas.

In addition to citizens, a large number of organizations contributed to the "Rebuild Lac-Mégantic" project: NGOs, private companies, government organizations, the governments of Quebec and Canada, artist groups, the Red Cross, elementary and secondary schools, municipalities such as Quebec and Montreal, and many more.

The local government's discussion of recovery, planning, and reconstruction has grown considerably thanks to the contributions of thousands of citizens. The citizen participation approach has enabled the town to adopt a shared vision that unites the community together in a project that combines reconstruction with strong social acceptability, which favours the financing and carrying out of innovative projects.

The diversity and breadth of the role of cultural stakeholders underscored their importance in the community. The Arts, Culture, and Heritage Commission (CACP) has become a key player in the field thanks to the important interventions of its members.

This project has transformed the face and landscape of Lac-Mégantic, helping culture and diversity to take over the streets. Citizens also wanted the participatory project to evolve into a genuine "culture" of citizen participation. Undoubtedly, the social impacts are evident in the pride of all citizens, despite the immense losses suffered. Above all, this project has made citizens primary actors and re-builders of their community, thereby empowering them. Lastly, cultural facilities allowed citizens to reclaim the heart of their city and helped revive economic activity, subsequently preserving or even creating businesses and jobs.

Several activities have been evaluated independently, without a larger overall project evaluation, but more specific measurement tools are being developed. Under the direction of Estrie Public Health Department of the Government of Quebec, a team of local health and social services stakeholders has been measuring the psychological health of residents since the tragedy. Its role is to support the population in its long-term recovery by encouraging healthy lifestyles, and social and civic participation, thereby breaking the feeling of isolation and facilitating access to resources. The results of these assessments are public and have been published online through newsletters.

Additional studies will be conducted on the importance of increasing citizen participation initiatives in the recovery process.

Funding for the Office of Reconstruction has been renewed for 2 additional years until September 2020. The team now consists of five people: Project Manager, Project Officer, Energy Transition Development Officer, Communications Officer, and Administrative Assistant. The initial budget of $2.2 million CAD was funded mainly by the Government of Canada. At the same time, the town continues to fund local cultural and social organisations.

The City of Lac-Mégantic was a candidate for the third "UCLG Mexico City – Culture 21 International Award" (November 2017 - May 2018). The jury for the award drew up its final report in June of 2016, and requested that the UCLG Committee on Culture highlight this project as a good practice in the implementation of Agenda 21 for culture, as a special mention for the third awarding of the prize.

This article was written by the Office of Reconstruction team for the Town of Lac-Mégantic, Quebec, Canada. 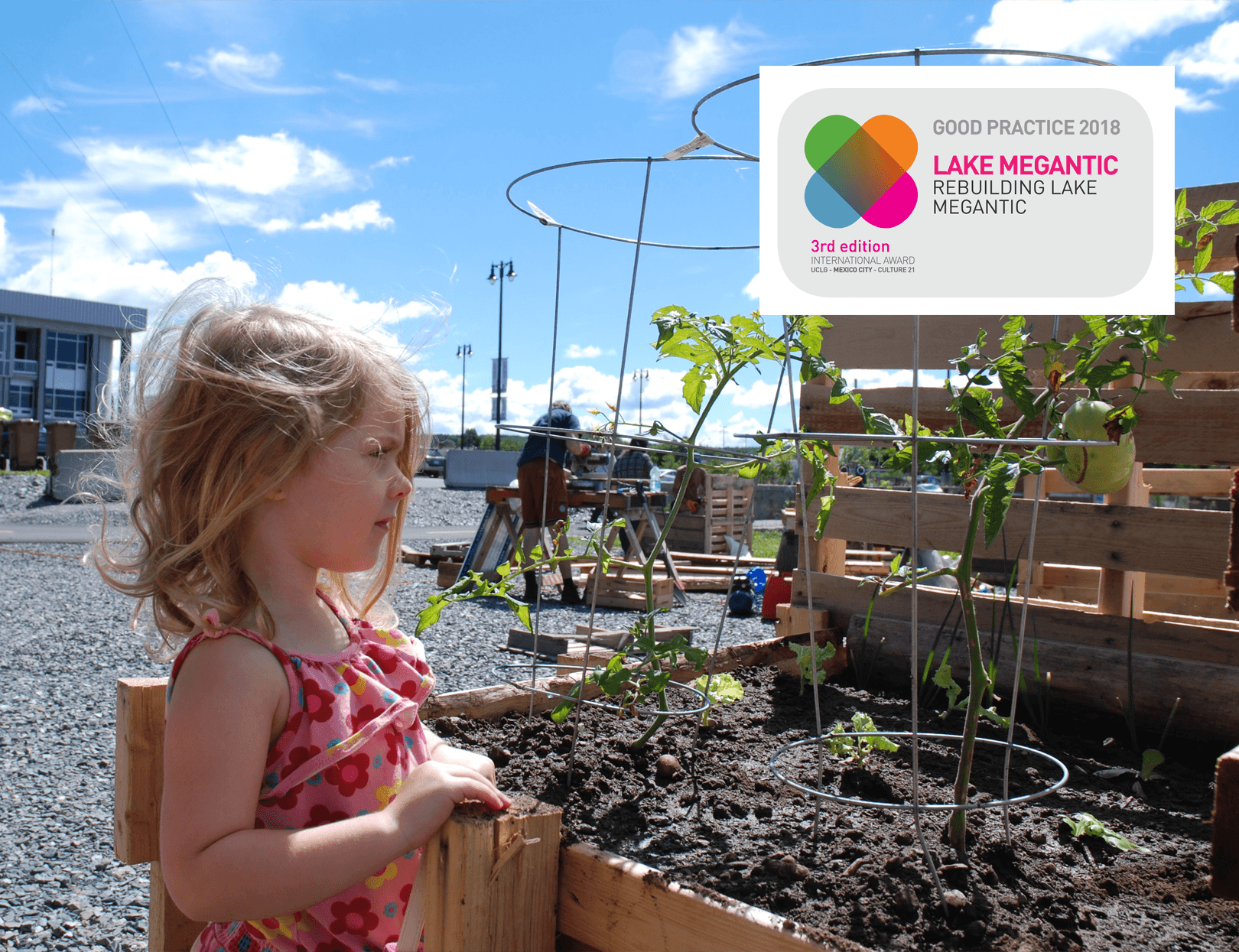