Parks and public gardens of Kazan

In 2005, on the verge of celebrating its 1000th anniversary, the city of Kazan undertook a rapid and significant transformation: among many initiatives, it resolved its issues of dilapidated housing in the city center, opened its first underground stations, and thanks to the XXVII World Summer Universiade, the city got rid of traffic jams, transforming the city's road network. In the meantime, the historical center was reconstructed, and modern sports infrastructure emerged throughout the city.

In 2014, the city announced the "Green Record" program. 140 000 trees and 64 000 shrubs were planted in Kazan, and more than half a million square meters of new lawns were laid. As a next step, part of the "Blooming Kazan" program, more than 6 million flowers are planted every year in the city, while local establishments, business companies and social institutions come up and design amazing art objects flowers-made.

After a while, it became clear that simple trees and flowers planting was not enough: more competent approaches to design were required. Within the framework of the "100 Hundred Squares" program, It was decided to involve students from the Kazan State University of Architecture and Engineering (KSUAE) to design and beautify new objects.

Finally, with the development of a global program for the development of urban public spaces, a great creative group of "Architectural Troopers" emerged in Kazan. The goal of the program was to have a real impact on the quality of citizens’ life by changing the socio-cultural environment, and building parks and public gardens instead of the usual shopping centers. 2015 was declared “Year of Parks and Public gardens” in the Republic of Tatarstan, 2016 - “Year of Water Protection Zones”, and 2017 - “Year of Public Spaces Development”.

Despite the alteration in the architectural image of the city, the transformations that happened to the buildings and landscape of Kazan since 2014 took into account the wish of the population to live in a green, eco-friendly city, with recreation and leisure activities.

The goal of the project is to improve the quality of life of the population by improving the city environment, and by creating comfortable and safe conditions for leisure, recreation and leisure.

From 2015 to 2017, 36 parks and public gardens were created in Kazan. Each with its own unique features and comfortable environment. The key issue in the design of these parks was to make them cherished by the citizens of Kazan, to make them feel committed for the creation and management of these public spaces. In this sense, principles for "participatory design" were developed, and residents, and activists in particular, were first invited to discuss the tasks ready for implementation, and then were fully involved in the design phase, together with architects in charge of technical development. As a result, any park development project is first discussed during public hearings, as well as during a series of working meetings, focus groups and project seminars, and after the very final approval of the project by residents, it is approved for implementation. This participatory process guarantees high attendance, business sector engagement, as well as a high number of quality of events and cultural programming in the parks. In addition, at the stage of design of the new parks and renewal of existing ones, each of them was allocated cultural codes matching the historical context of the territory, the specific needs of visitors and events tailored to this specific context.

For example, the "Black Lake" park; located in the very center of the city, was thought as a historical park, reflecting the city’s cultural heritage, and a dedicated place for Kazan’s intellectuals. It became a venue for events such as the summer book festival, which attracted dozens of publishers, authors and more than 15 000 visitors over the weekend, as well as the Open Food Market festival, where high-quality samples of the Kazan’s best gastronomic variety were presented. The "Black Lake" park also hosted the "Pechin Bazaar" national fair, with an emphasis on the Tatar fashion and culture, organized by the community of Tatar youth, as well as a charity market with the participation of the best designers of the city. The «Krylia Sovetov» park has a different setting. Its old-fashioned style perfectly fits Kazan uptown scenary, and creates a unique environment for its residents. It forms part of a complex cultural environment named the “Park+House of Culture” tandem.

In 2015, the “Kremlevskaya naberezhnaya”, one of the main walking areas of the city, was opened. It hosted a large number of summer and winter events organized for tourists and Kazan citizens all along. During warm months, it hosts drawing lessons for adults, sports training, salsa master classes, bachata and kizomba, poetry readings accompanied by pianoforte, as well as various contests and flash mobs, among other attractions. It is also possible to rent bicycles and velomobiles.

In addition, the Gorkinsko-Ometevsky forest was built from scratch in a record time of 9 months. For many years, only skiers were adventuring into this forest with an area of nearly 100 hectares. After the opening of the park, a huge micro district of 350 000 inhabitants was built and equipped with a leisure area. The park focuses on sports and environmental themes, with a unique author's playground "Chekharda", a 5 km long illuminated ski slope, an ecological area with red book plants, and a large festival stage which, on an evening as its peak, was attended by 20 000 visitors.

In December 2017, a second wave of facilities Gorkinsko-Ometyevsky forest were implemented, encompassing a “Container park” for commercial facilities, designed following the example of the best European capitals, as well as a “pump-track”, a unique and unparalleled circuit for cyclists. At the moment, preparations are being made for the commissioning of the third wave.

In Kazan, intensive work is also carried out regarding the improvement of recreation areas, including city embankments. One of the largest projects undertaken in recent years is the eco-rehabilitation of the Lebyazhye lake system. Work is being carried out to renew the Lebyazhye Lakes system, has no groundwater recharge, and then currently exist at the expense of the drainage area from the whole surrounding territory. Works on the lake are held in close cooperation with environmentalists, biologists and geologists, and takes recommendations from the Environmental Council into account.

Finally, the city’s first subbotnik (community work day) was held in the "Gorkinsko-Ometevsky forest" park, in the field of autonomous garbage collection. Schoolchildren activists and their parents cleared the Gorky Forest of household garbage, which was then subsequently sent for sorting and subsequent recycle.

Within the framework of the Year of Ecology, the Eco-Center "DOM" was opened in the park "Gorkinsko-Ometevsky Forest". This Eco-Center is a new space that is aimed at enhancing the ecological self-awareness of the population through its thematic educational culture.

Open meetings are held regularly to discuss the development of public spaces, during which the municipality received interesting proposals for events and new facilities to be implemented in the parks, but also valuable comments on the management of public spaces.

Local residents and activists in particular have shown an increased interest in the management of the city’s public parks through the “participatory design” process.

As the top green area, parks are in a way "lungs" of the city. Therefore, it is important to preserve them, as well as to educate in citizens sense of environmental responsibility. Ecological communities are involved in the parks design.

There are no specific evaluation mechanism in place regarding this Initiative. However, it is to be noted that the number of events and holding applications from organizers in renovated public spaces has been increasing, generating higher business activities within park territories. During the summer season 2017, over 600 events were held in parks and public gardens. There was also an increase of the number of parks’ visitors, including in winter time. During the winter holidays (from December 22, 2017 to January 8, 2018), 10 key park areas were visited by 178500 people.

The participatory and customized approach can be considered as a key factor of success for this initiative.

The local government is in constant contact with residents of the city during the course of project implementation through "participatory design" processes and open debates and seminars.

The implementation of Parks and public gardens’ projects was carried out in June 2017, with the support of Kazan City Mayor and Tatarstan Republic Assistant, MBU «Directorate of Parks and Squares». In addition, a new establishment within the Kazan City hall was opened. Its scope of work includes maintenance and cultural programming of 14 renewed parks and public gardens. An open competition was held in order to pick up a Directorate team. As a result, 4 candidates were selected to fit the positions of park managers.

The tradition for organising open discussions with the residents of the city has persisted within the Park Administration Directorate, and the connections with nature and architectural and cultural concept of parks are still taken into account. The Directorate actively engages with a various range of stakeholders such as theaters, art unions, and musical bands.

Kazan was a candidate for the third "UCLG Mexico City – Culture 21 International Award" (November 2017 – May 2018). The jury for the award drew up its final report in June of 2016, and requested that the Committee on Culture promote this project as one of the good practices to be implemented through Agenda 21 for culture.

This article was written by Alsu Shakirzianova, Head of the MBU “Directorate of Parks and Squares of Kazan City”, Russian Federation, Tatarstan Republic 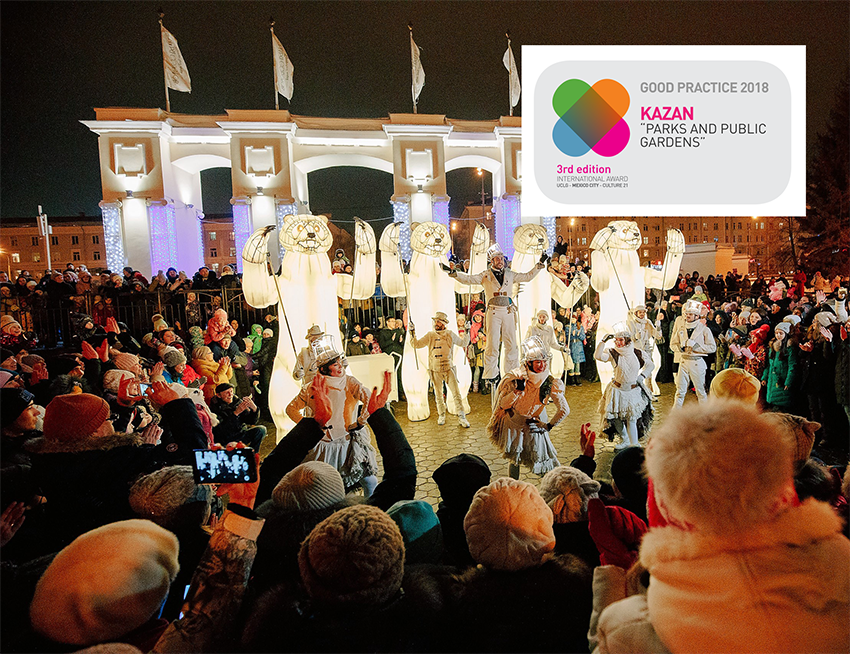