Rosario is located in the province of Santa Fe, Argentina. It has an area of 178.69 square kilometres, and is home to 948,312 people (2010). It is the third largest city in Argentina and was divided into six districts under the Municipal Modernization and Decentralization Programme. This initiative aimed to fix the innumerable problems created by the centralized model of administration, management, and governance.

By 1995, decentralization had begun to take hold in the administration, tackling the issues faced by large cities, such as socio-economic exclusion, violence, and others. This resulted in a new perspective and management approach from a neighbourhood level. Additionally, intra-city communication was developed to increase inclusion and enhance rights. Another important approach is the collective construction of public spaces such as green spaces, community and cultural infrastructure, or even of fresh perspectives on production and cultural creation that focus on the neighbourhoods and their complexities. Currently, neighbourhoods are comprised of migrant populations primarily from northeastern provinces and other South American countries.

Culture and education are simultaneously symbolic and concrete parts in the process of building human communities, but they also add a true sense of meaning while mutually enriching one another. Subsequently, developing cultural and educational policies is the driving force of all social transformation. With this perspective, the Ministry of Culture and Education based its lines of work on core ideas: deepening decentralization; emphasizing children and youth issues; creating comprehensive education policies; institutional strengthening; improvement of infrastructure; designing communication strategies that will focus on proximity with citizens, social ties, identities, popular consciousness, and the daily development of the city.

The region boasts a clear vision for cultural and educational policies.

Developing cultural and educational policies is the driving force of all social transformation, which subsequently helps create tools for proactive citizenship in these processes.

THE SCHOOL
The school is the result of collectively thinking about the creation of public spaces and establishing regional coordination from a neighbourhood level approach, while still focused on city goals.

The school addresses both the principles of Agenda21 for culture and the SDGs, which were signed by the Municipality of Rosario in 2015. The initiative was framed by the Charter of Educating Cities of the International Association of Educating Cities.

Through a decentralized approach, it lends validity to the knowledge within peripheral, migrant, and Indigenous cultures across the city. It facilitates knowledge transfer and replication, including experience with new expressive languages.

As a result, the school plays a key role in enhancing cultural rights. This allows modern identities to emerge, and helps provide services to a large part of the population while also facilitating access to other city services.

The school also tries to correct gender stereotypes that exist in different spheres or disciplines. It operates using a non-sexist perspective, and establishes sexual diversity. Similarly, it aims to rethink production, distribution, and consumption cycles through collective production and by encouraging criticism.

The main goal of the school is to foster inclusion and empowerment in public spaces among youth in vulnerable situations. This is to be achieved through a collective and creative approach to design, production techniques, and the commercialization of clothing and accessories.

Annual training was held in partnership with the school at state-run and non-state-government spaces in each district. There are two fundamental parts of the programme held twice a year: technical training and creative stimulation. It ends with an inclusive event plus a series of production marketing fairs.

The initiative emerged in 2011 as a community need, as evidenced by the vote on the city’s Participatory Budget in the Western District. The results showed a clear desire to establish a connection between the spheres of education and production. In 2013, there was a noticeable qualitative leap that introduced production workshops and technical training. At this point, participants were able to create and make clothes not only for their personal use, but also for a commercial one, creating new perspectives on their work. One example is the TRECE collection, where source and garments send a clear message of nonviolence to youth.

The initiative has shown that it is possible to be possible outside of what is mainstream or dictated by the market.

In 2014 the school expanded into two new districts: the North and the Northwest. It opened two new spaces and aimed to strengthen the development of the school to promote inclusion through culture-based initiatives. In 2015 another qualitative leap took place. This time, the school became part of a new organizational structure: the General Directorate of Regional Management within the Ministry of Culture and Education. The school would have a presence in all districts and offer production workshops with theoretical and practical classes. Since 2016 an annual show has been held that brings workshops from all neighbourhoods together in a single event whose aim is to involve all participants while lending visibility to the school’s mission and its events.

Impact on the local government, territory and population

With the inclusion of the school in the General Directorate of Regional Management (2015), traditional workshops on artistic languages were rethought and set up as education spaces, with different learning paths that offer variety and continuity. It is also possible to establish a dialogue on the school’s processes and products with other cultural spaces, such as the Rosario Museum of Contemporary Art, that are traditionally isolated from involvement in neighbourhood productions and initiatives. This change in perspective aims to destabilize dichotomies of art/job, artist/manual labourer, whereby garments and accessories made in the school are integrated into an intervention/installation space.

Another challenge was to further involve male audience members in activities that are traditionally associated with women. Proposals have been expanded to generate greater connections with young male audience members, vulnerable groups, and those targeted by public cultural policies. This involved hosting seminars on techniques such as silk-screening and printing.

Over the years, the development of the school shows an increase in knowledge capital and a growing complexity across its varying fields. The demand for different production groups and levels required hiring more teachers who could meet the needs of more groups. Indeed, according to the needs of each group, some required specific knowledge, while others also needed facilities with specialized industrial machines. Students who had already been to some of the school spaces required further specialization in their knowledge.

As a result, the issue of thematic areas emerged, and each teacher was placed in charge of a specific topic. This subsequently required participants to attend various workshops in different districts. This level of movement was unprecedented for many young people who hardly leave their neighbourhood. Therefore, urban mobility is also being developed, not only in the Districts’ centres, but also at the intersections between different neighbourhoods.

The cultural spaces are designed to offer continuing and consistent training to the populations of different districts in different languages.

The School of Clothing Design is assessed by the general impact evaluation system under the Ministry of Culture and Education. They evaluate specific actions and events, their distribution throughout the territory, and the number of attendees.

The territorial management evaluation system works in partnership with other government departments to evaluate the participation of younger populations within the different neighbourhood programmes. In addition, the school conducts an annual survey with its participants to learn about their interests and evaluate the teaching methods.

Several factors that have contributed to the success of the School of Clothing Design include:

The school focuses on devising ways to elicit enthusiasm from youth who are uncomfortable in formal education or other institutions. It will give them the tools needed to develop their own projects.

In accordance with the policy agenda by Municipality of Rosario, the school receives constant support for growth, expansion, and continuity. This translates into job security for its teaching staff, the acquisition of machinery and tools, and the provision of spaces in different areas of the municipality for further development. Over the last year, new formats have been implemented including workshops for short-term projects and intensive training in silk-screening, sportswear, haute couture, swimwear, and tanneries. This aids assessments on the development capacity of the projects and the population as regards opening new spaces for the school in the future.

Rosario was a candidate for the third “UCLG Mexico City – Culture 21 International Award” (November 2017 - May 2018). The jury for the award drew up its final report in June of 2016, and requested that the UCLG Committee on Culture promote this project as one of the good practices implemented under Agenda 21 for culture. 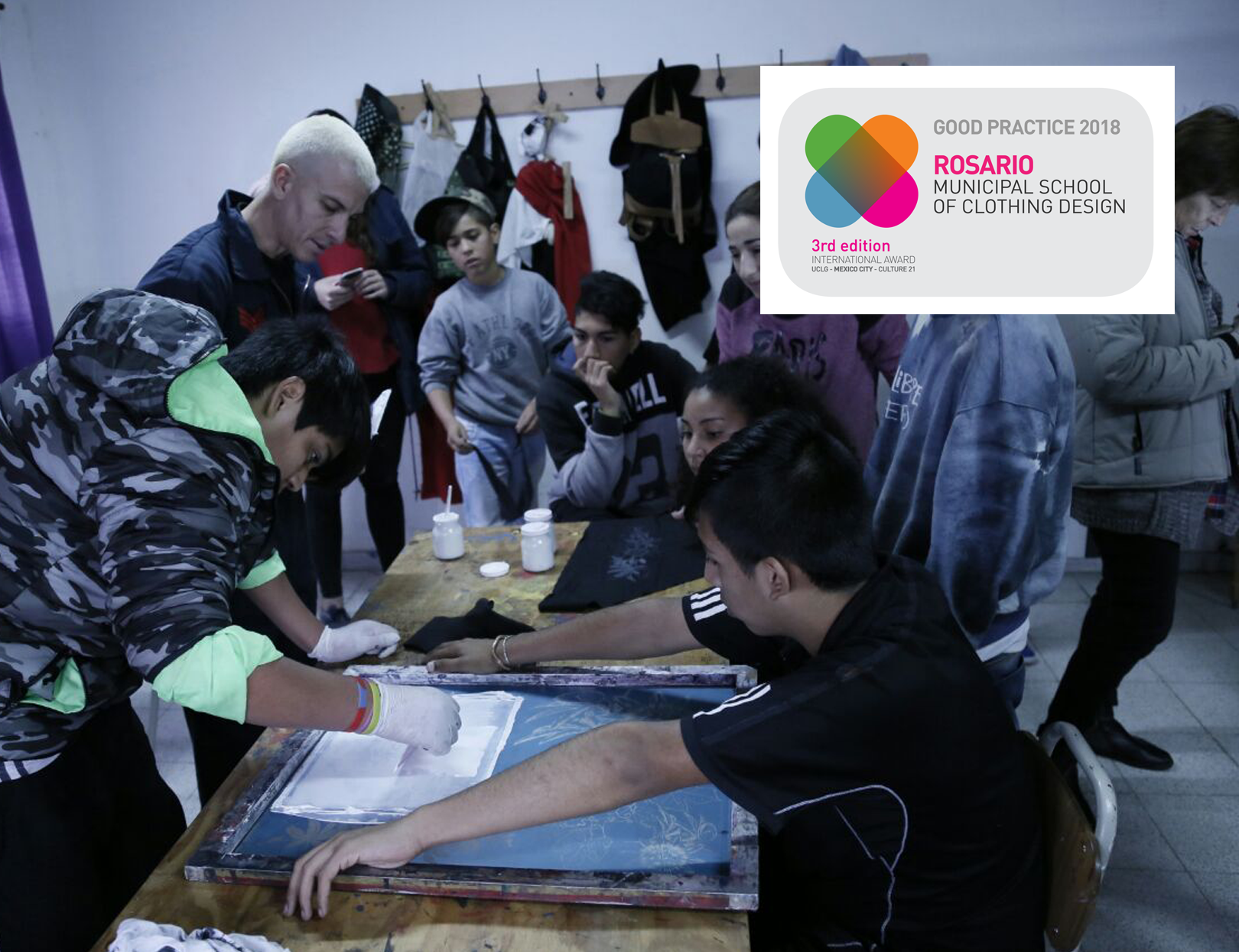