Gaziantep, a city in Southern Turkey predominated by various size of industrial enterprises and accompanying services, was classified as one of Turkey’s new local industrial nodes in 2005. This industrial growth created employment opportunities, attracting nearby rural population and leading to a kind of ruralisation of the urban centre. Meanwhile, the local government was busy addressing the city’s infrastructure deficiencies, and tourism and cultural heritage were mostly absent from the political agenda. Therefore, there were nearly no protection measures for the cultural assets under pressure due to the new arrival of population to the city. The neglect of cultural heritage turned sites into places of rescue for homeless people, and created a sense of insecurity for the population at large, women and children in particular.

The policy for mainstreaming culture was designed to address the neglect of the cultural heritage, in line with local development policies aimed at ensuring sustainable development and diversifying the city's sources of revenue while empowering the people.

Despite the richness of Gaziantep tangible and intangible cultural heritage, most of its assets remained abandoned. People were unaware of the value of the cultural heritage and culture was not an important source of local revenue.

Gaziantep local development policies paid utmost priority to ensuring the participation of people as creators, performers, entrepreneurs and visitors, through the design of a cultural fora within the City, accessible to all (in terms of location and transportation). The city’s policies also developed an integrated gender perspective, encouraging women’s participation to cultural life to harness their creative and productive potential.

The Policy lays a strong ground for sustainable protection and production of culture by enabling the use of cultural assets as per their construction purpose. It promotes an inclusive enabling environment for the vulnerable groups, through the improvement of infrastructure and rearrangement of transportation policies to minimize accessibility challenges.

The main goal of the policy is to mainstream local culture in an effort to sustain local development, based on three pillars:

The city’s castle and its surroundings were designed as the main arteries shaping the social, cultural, scientific and commercial life of Gaziantep. The Policy, by relying on this historical foundation and functionality, positioned the Castle as a hub with a trickle down impact on its surroundings avenues, streets and bazaars.

16 archaeological, culinary and folk art museums and exhibitions were opened (such as Zeugma Archeological Museum), out of which 7 are managed by the local government.

The governorate supported the process from the beginning to the end, ensuring the continuity between the city development and the cultural policy, together with various government partners, including provincial level representatives.

More than 30 000 catalogues and brochures were produced and disseminated annually, and more than 500 meetings, festivals and exhibitions were organized in the City.

Measures to prevent harm on the cultural heritage, in particular regarding the sudden influx of Syrian refugees, have sometimes created tension in the policy implementation. The city also had to face a shortage in qualified human capital in different sectors, particularly during high seasons. However, the city managed to address both problems through protection measures and rapid short-term skills building programs.

The revenue generated by the cultural activities that were implemented increased the city’s attractiveness and revenue sources. Throughout this project, the city of Gaziantep has become an open space for living, experiencing and producing culture, creating a system where culture is a crucial pillar of sustainable development.

After the policy implementation, more than 15 000 jobs were created, with 4 000 entrepreneurs selling cultural products, and 1 000 enterprises specialised in the cultural sectors (including catering and hotels). Cultural tourism, as a sector of the green economy, has become an important source of revenue for the City. The number of tourists from the country and abroad increased ten-fold to reach 623 000 by the end of 2017, with approximately 370 000 museums’ visitors by 2017.

Owing to the inclusive multi-stakeholder approach adopted from the design stage, all relevant stakeholders showed a high commitment and ownership to the Policy. Whereas entrepreneurs first expressed frustration due to the rise in rents, it faded quickly in view of the concrete high returns generated in terms of tourists and visitors.

The policy for mainstreaming culture promotes a more inclusive and resilient society as it diminishes the risks of exclusion and marginalization caused by lack of employment, interaction and dialogue. Different platforms were arranged where music, culinary and handicrafts co-exist in harmony within the city, and are displayed and shared with the population, benefitting in particular to the most vulnerable groups. This environment enabled the peaceful integration of a hundred thousands of Syrian refugees, who could find a space in the city to transfer their cultural assets, and could access various skills-building programs.

The policy targets Gaziantep population at large, approximately two million people, from artisans and handicrafts persons to tourism agents including hotel owners, entrepreneurs and travel agents and entrepreneurs of catering services. It particularly highlights the crucial role played by women in the prreservation and transfer of traditional knowledge, through the creation of dedicated fora where they can share their creative productions. Finally, the policy treats environment as an indispensable part of the cultural ecosystem.

Culture and cultural heritage turned out to be key factors for the well-being of the people, in particular due to the ownership of all forms of cultural heritage by the city, and to structure efforts for the promotion and protection of this heritage.

Gaziantep Metropolitan Municipality encourages the active participation of all relevant stakeholders in the initiative, including district local governments, through a platform that convenes on a regular basis to assess the impact of the policy from different perspectives, as well as the necessary human, technical and financial resources, investment planning, lobby and advocacy activities.

More than acting as per a structured matrix, members of the platform base their evaluations on concrete implementation outcomes, challenges and feedbacks from the residents. The Citizen Assembly plays a particular role in this process.

Composed of numerous civil society and community-based organizations (CSO/CBO), the citizen assembly enables citizens to express their expectations, needs and observations on the policy directly to the local government. As a result, unforeseen negative results are immediately diagnosed and addressed.

Gaziantep policy owes its effectiveness and groundbreaking feature to the following key aspects:

Starting from its planning in mid-2000s, and regardless of turnovers in the organizational structure, the policy in being implemented with the same inclusive and holistic approach until now. The renovated cultural heritage assets and building represent today vital organizational structures, ensuring sustainability and continuity throughout the supply and demand chain of the policy.

From a financial perspective, the policy proved self-sustainable, owing to the value-added created by the cultural activities and creative productions.

Progressively, the city of Gaziantep has built stronger capacity regarding the protection and promotion of cultural heritage. Finally, thanks to the scrutiny of the local government-led platform, the evolving needs of the market are rapidly diagnosed and programmes are rearranged accordingly.

Gaziantep was a candidate for the third "UCLG Mexico City – Culture 21 International Award" (November 2017 – May 2018). The jury for the award drew up its final report in June of 2016, and requested that the Committee on Culture promote this project as one of the good practices to be implemented through Agenda 21 for culture. 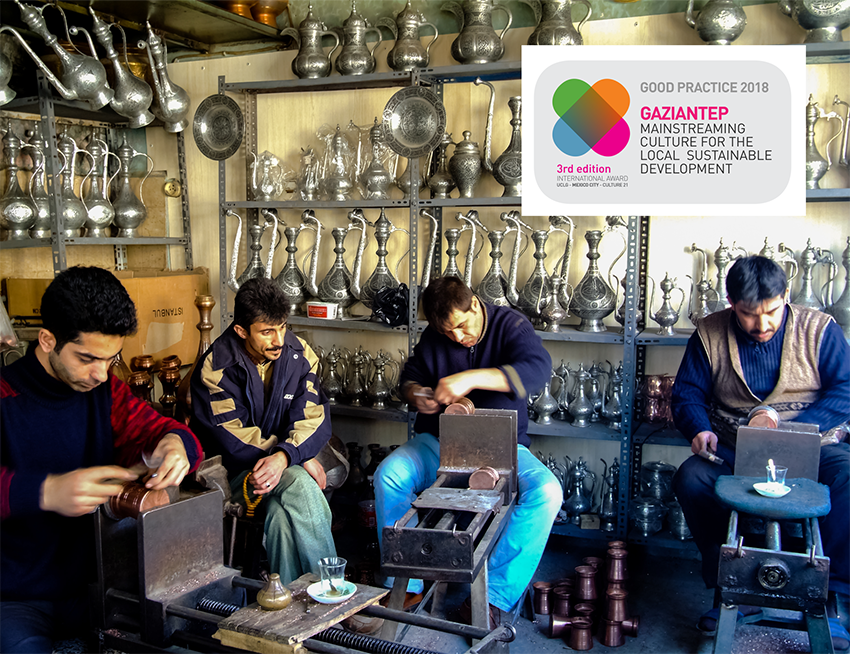