Living treasures of the culture of Ceará

The State of Ceará has around 9,1 million inhabitants. Its economy ranks 11th among the other states of Brazil, and its capital, Fortaleza, is located in a strategic region, for its facilitated access to big economies of the world. The main economic activities of the State are commerce and services, industries, agribusiness, tourism, mining, and others.

Currently, according to the Ministry of Education, Ceará has the best public education in Brazil.

In 2003, the State government, through the State Secretary of the Culture (SECULT), assured the registration of masters of the traditional popular culture, supporting, preserving and transferring to future generations the cultural memory of our people, and their knowledge and art. In 2006, this law was reviewed and expanded, also maintaining groups and collectivities, called Living Treasures of Culture. In its 53 years of history, Secult has assumed the effective commitment to contribute to the protection and sustainability of the cultural heritage.

Under this environment, the cultural policy of the State of Ceara established strategic goals to improve the access to cultural assets and services; preserve and disseminate the rich and diverse tangible and intangible cultural heritage; foster the arts and manifestations of Ceara; amplify, modernize, and internalize the cultural network; extend the cultural citizenship and performed arts’ actions by institutions of the civil society; develop formative actions on art and culture; modernize the cultural legislation; invigorate popular participation; strengthen the State System of Culture in federative cooperation with the municipalities; and include the cultural economy in the center of the State’s development.

The project aims to recognize, protect and value the diversity of knowledge, the making and the popular traditional cultural expressions of Ceará.

The Cultural Policy of the State of Ceará is aligned to the SDGs of the UN and the Agenda 21 for Culture, provided in the management plan 2019-2020, named “Ceará, State of Culture”, a “navigational map” presented as a programmatic agenda suggesting to guarantee the access to culture and arts as the main direction on the qualification of other policies, acting in an integrated manner with programs of different departments promoting environments of innovation, creation, production, diffusion and creative economy for the development of a society of the knowledge through culture.

The cultural policy of the State of Ceará is based on:

The project aims to recognize, protect and value the diversity of knowledge, the making and the popular traditional cultural expressions of Ceará, preserving the cultural memory and the transmission of its artistic and cultural savoir-faires.

Since 2004, 106 masters (71 of them are alive), 13 groups and 3 collectives have been awarded. Currently, the Living Treasures of Culture are present in 42 municipalities and 12 macro-regions of Ceará. Also, all 78 Masters of Culture were recognized by the State University of Ceará with the title of Notorious Knowledge in Popular Culture, which ensures that they can teach at educational institutions and cultural centers.

The main obstacle has been the lack of monitoring, and systematic diagnosis of traditional groups, collectivities, and the Masters who live in several municipalities of the State. However, we seek to build effective public policies to overcome this through dialogues with municipal governments and the participation of civil society.

The State of Ceará became a pioneer in Law of Masters of Culture, which deals with the recognition of masters’ knowledge and skills. The law was revised in 2006, expanding from 60 to 80 masters, these being part of the Register of “Living Treasures of Culture” in Ceará. Moreover, Ceará has 94 Living Treasures and has given a lifelong and non-transferable aid to 78 Masters of Traditional Popular Culture.

Masters are recognized as diffusers of traditions, history and identity, passing on their knowledge and experiences to new generations.

The implementation of the policy of the Living Treasures of Culture represented a significant change in the institutional organization of the Cultural Policy of the State. With this strategic action, the governance expanded as shared management of actions aimed at protecting, safeguarding, valuing and enjoying the cultural heritage.

With the larger participation of sectors of the government and civil society, in a democratic way that envisages guaranteeing human rights and human dignity, the contribution is made in a transformative way in the social, environmental and economic dimension in the lives of communities and the directly contemplated citizens.

Ceará has 94% living treasures and has given a lifeling and non-transferable aid to 78 masters of traditional popular culture.

We act and persist on the social transformation through culture, so we believe in planning, implementing, monitoring and evaluating a cultural policy in a democratic way, considering the premises of participation, transparency, transversality, intersectionality, diversity, inclusion, and cultural democracy. The indicators are predicted according to the data collection and the monitoring of indicators established by Secult’s cultural heritage and memory policy.

In 2017, the amount of Masters of Culture officially recognized by the Government of Ceará, through the Secretary of Culture, increased from 60 to 80. The expansion, which represented an important achievement of cultural policy and the support of traditional popular culture, was assured through the approval, by the Legislative Assembly, of a message sent by Governor Camilo Santana. Considering the expansion to 80 officially recognized masters of culture, the Government accomplished one of the goals of the Cultural State Plan, approved in 2016, including guidelines for the promotion of the traditional popular culture. Masters are recognized as diffusers of traditions, history, and identity, passing on their knowledge and experiences to new generations.

Ceara was a candidate for the fourth “UCLG Mexico City – Culture 21 International Award” (November 2019 – May 2020). The jury for the award drew up its final report in June of 2020, and requested that the Committee on Culture promote this project as one of the good practices to be implemented through Agenda 21 for culture. 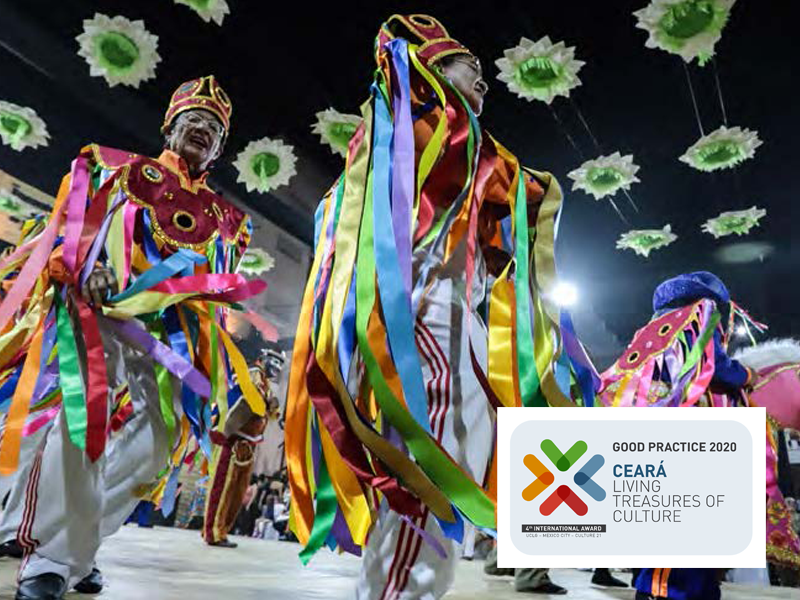