Lisbon is located on the South West of Europe, on the right shore of the Tagus River Estuary. It is the longest river in the Iberian Peninsula, and one of the most ancient towns in Europe.

The city has traces of persistent occupation dating back to the VII century B.C., having successively been part of the Roman Empire, under rule of Suevians and Visigoths, occupied by the Moors in 711 and taken by the Portuguese King Afonso Henriques in 1147, becoming the capital in 1256. There is a mosaic of cultures that reveals itself in the multiple urban districts with distinct personalities that are encompassed by the city’s formal administrative organization.

Lisbon is thus a city of many cultures, influenced by both its historical roots and the immigration phenomena. The tourism boom experienced in the past decade has had a significant impact in its socio-economic structure, becoming a major driving force in its development.

The City Council and EGEAC, the municipal company that manages the contest, took the growing momentum of the Sardines project as an opportunity to deepen their action in regards to cultural democracy, incentivizing citizen participation in creative processes and increasing the proximity of the public administration to the population. The creation of the competition was a way to address a need of several stakeholders to be more involved, through novel ways, in cultural production, converting consumers into producers, spectators into actors. The contest promotes access and inclusion through special provisions for vulnerable populations, and has received submissions from imprisoned inmates, shelters, retirement homes, schools and special needs institutions. This is integrated in the City Council’s wider social policies, which promote inclusion of the most fragile segments of society, in risk of poverty and social exclusion.

THE AIM OF THE SARDINES CONTEST IS TO, THROUGH A DESIGN COMPETITION, STIMULATE CULTURAL PARTICIPATION.

The 1990s were a milestone in the development of cultural policies in Portugal and Lisbon characterised by stimulation, creation, internal development and external visibility. It was a decade of strong investment in infrastructure and international events, such as the European Capital of Culture in 1994 and the Expo’98 World Exhibition. It brought an important development of the cultural ecosystem of the city, with better working conditions, increased funding and wider visibility and market demand. Consequently, the level of expectation increased for both audiences and artists.

The impact of this influential period for local cultural policies remains to the present day. In 1995 was created the Empresa de Gestão de Equipamentos e Animação Cultural (EGEAC), widening its mandate from the management of the Historical Districts to the cultural management of the whole city. Created under a spirit of urban regeneration and rehabilitation, between culture and urbanism, EGEAC deployed the City Council’s cultural policies, in parallel with the municipal services.

But in the 21st century new requirements arose, and with it new planning methods and proposals. The municipal offer expanded substantially, permitting a more strategic intervention in the territory. Political action was then directed towards upgrading Lisbon’s cultural dimension; diversity; promotion as a factor of competitiveness, knowledge and innovation to value the city’s heritage; and to facilitate the relationship between the city and its artists and cultural actors.

THE CONTEST BETTER INVOLVES THE POPULATION ON PUBLIC AFFAIRS OF THE CITY, INCREASING THE DEMOCRATIC CULTURE.

The Sardines Contest enables the City Council to focus on a very specific project, with potent symbolic and practical results, leveraging the sardine icon to enable participatory culture-making with multiple ramifications in terms of democratization of access, inclusion and economic development, in line with the objectives of Local Agenda 21 and Agenda 21 for Culture. This project is designed to surgically address these issues, with the advantage of being very inexpensive, but suffering from a constant need of reinvention, to create continuous interest among the many stakeholders.

The aim of the Sardines Contest is to, through a design competition, stimulate cultural participation. By involving the population in the creation of Lisbon’s Festivities, authorship and creativity are the whished values promoted.

The Sardines Contest is an open design competition aiming at identifying the best designs of sardines, the icon of Lisbon’s Festivities, awarding a cash prize to their creators. It is a competition open to everyone, and it aims to involve citizens in the creation of Lisbon’s Festivities.The participatory dimension is a strong focus of this project, as it is a transversal aim of the City Council to better involve the population on the public affairs of the city, increasing the democratic culture.

IN A WIDER SCALE, THE GENERAL POPULATION HAS BENEFITED GREATLY, HAVING A NEW, IMMEDIATE AND FRIENDLY ICON REPRESENTING THE CITY’S DIVERSITY AND SOUL.

The Sardines Contest is developed by initiative of Lisbon’s City Council and EGEAC, and does not rely on partnerships with civil society entities or NGOs for its execution. It does have partnerships with other public entities, such as the Portuguese Tourism Boards in the promotion of Lisbon as a tourism destination, and with media organizations, for promotion agreements.

The Contest partners with the Portuguese Tourism Board in promoting Lisbon as a tourism destination. This partnership materializes in providing the creative output for the presence in international tourism fairs and events, and its timing is not directly linked with the contest itself.

The impact of the Sardines contest among the general population is widespread. Since its inception in 2011, the contest has drawn 25.298 submissions, averaging more than 5.000 per year, from 14.212 authors, averaging over 2.800 per year. In a wider scale, the general population of Lisbon has benefitted greatly from the sardines project, having gained a new, immediate, friendly icon representing the diversity of the city and its soul.

The Sardines Contest is an example of the participatory policies that Lisbon’s City Council develops. The administration of the city has been shifting from a distant and inaccessible stance, as the public services are usually regarded in Portugal, to an approachable and friendly one, engaging directly with the citizens and letting them have a say in the management of the city.

This project has spurred waves of creativity, with outstanding outputs, from amateur and professional creators, awarding them with a high level of visibility.

The impact of the Sardines Contest on the city has been multiple. There has been a symbolic impact deriving from the intangible value created around the massive population’s reception. Finally, the project caused Lisbon’s international visibility.

The Sardines Contest has had a significant economic impact in the city. It attracts investment in products and services by local businesses. It created a welcoming environment for visitors, taking advantage of the current tourism boom. Moreover, the contest has proven to be a tool of inclusion, democratizing access to culture and culture-making. It is notable that, on average, the majority (58%) of submissions come from women, which signals a neutrality in regards to the usual gender bias.

THE PROJECT IS INTEGRATED IN THE CITY COUNCIL’S WIDER SOCIAL POLICIES, PROMOTING THE INCLUSION OF THE MOST FRAGILE SEGMENTS OF SOCIETY, IN RISK OF POVERY AND SOCIAL EXCLUSION.

The City Council of Lisbon and EGEAC intend to continue developing the Sardine Contest in the future. The contest model is well-established, but the government seeks new paths for further engage the citizens and the community around it. More inclusion in the underprivileged populations and schools, further improving participation of these segments and the development of content to support creativity workshops in connection with the contest.

Another area of attention will be the spillover effects on creative industries initiatives, which require a systematic approach and capacity within the team to address the multiple solicitations in this area. Finally, arose the idea of developing a virtual museum of the sardine, to be complemented with information and putting them in relation with the city, its heritage, the popular traditions and the role of creativity.

The city of Lisbon was a nominated candidate for the second 'UCLG International Award – Mexico City – Culture 21' (January–May 2016). The awards jury produced a final report in June 2016 and asked the UCLG Committee on Culture to promote this project as a practical example for the implementation of Agenda 21 for Culture.

This factsheet was put together by Maria Ferreira, Advisor to the Board of EGEAC, Lisbon, Portugal. 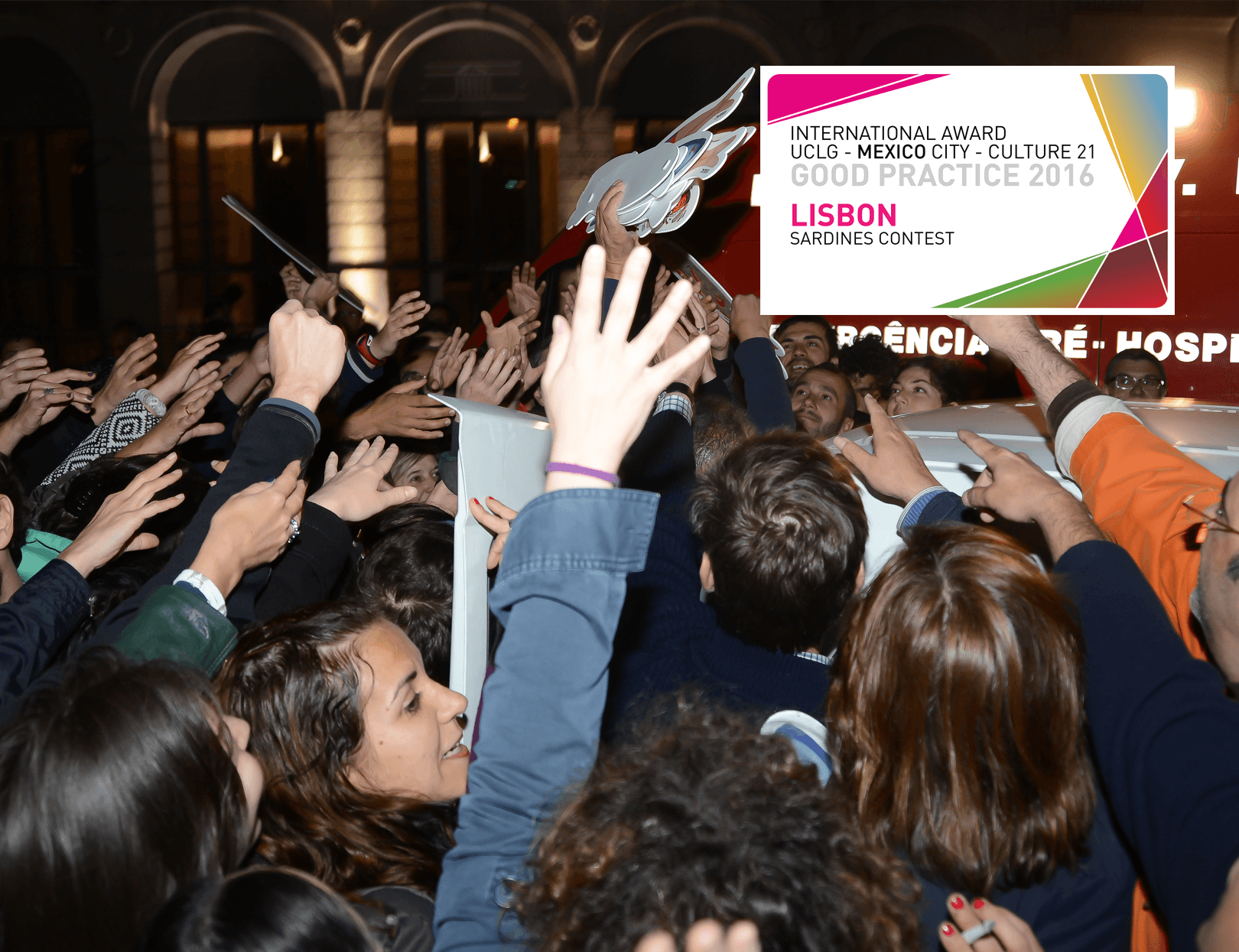