In 1940, Lima began witnessing an important migration movement that became widespread during the internal armed conflict that raved the country from 1980 to 2000. As a result of this long migration process, growth was disorganised, chaotic and informal, marked by a poor service supply from the State. However, migration transformed Lima into a city where all Peruvian cultures exist, where the diversity of identities and artistic cultural expressions is found, confronts, dialogues and acknowledges the exchange, tension, cooperation and solidarity in a dynamic of coexistence. Diversity is Lima's greatest wealth

The problems addressed by the programme have been divided into three main areas: 1) the hegemonic concept of culture managed by the city, which highlights the value of canonical art and mass entertainment and gives priority to a certain type of spaces and expressions only accessible to a minority of culture consumers; 2) the cultural policies and practices derived from this concept; and 3) the way in which the mass media invest their funds to benefit these policies and practices. This situation results in 4(sic) major adverse effects for the cultural sector and for the population as a whole: 1) lack of awareness of cultural rights; 2) vulnerable population with cultural rights that are neither satisfied nor exercised by them; and 3) the invisibilisation of artistic cultural proposals that are generated outside the hegemonic concept of culture and revolve around objectives and concepts that put emphasis on local development and articulation with the community.

Faced with this context, several Living Community Culture processes have been developed in different peripheral neighbourhoods of Metropolitan Lima in the last 40 years. Living Community Culture is an autonomous and independent process that arises from the people, where the artistic and cultural expressions are generated by the articulation of the communities with social organizations; they contribute to the development and peace of their territories. It is an experience of human, political, artistic, educational and cultural training that recognizes and leverages identities, dialogue, cooperation, peaceful coexistence, social cohesion, inclusion with gender equality, and collective construction. The Living Community Culture Programme of the Municipality of Lima (PCVC) aims at being an element that radiates and echoes the new human development paradigms proposed by the living community culture movement. The idea is to visibilise, recognise and strengthen the experiences of this movement.

DOORS WERE OPENED TO ADDRESS THE CULTURAL RIGHTS OF THE POPULATION, PARTICULARLY THOSE IN A POSITION OF VULNERABILITY.

Within the scope of the local government, the Institutional Strategic Plan of the Metropolitan Municipality of Lima provides guidance on public policies to the relevant agencies. It outlines the areas related to human and urban development and public space, and those corresponding to management and good governance.

Within the cultural sector, the approval of Ordinances 1650 and 1751 were an unprecedented milestone in the management of culture in Lima, because they provided for the organization of the Department of Culture. The Regulation for the Organization and Functions of the Department of Culture establishes that this Department is the steering body for cultural topics in Metropolitan Lima. It has to formulate, manage, monitor and evaluate any activity that promotes, strengthens and disseminates culture as a transversal element in the development of metropolitan policies, and to highlight the role of culture to build up citizenship and strengthen cultural identity. The Office of the

Assistant Manager for Cultural Promotion and Citizenship, the agency responsible for executing the PCVC, decides on the need to organize, manage, monitor and assess any activity strengthening living community culture in the city, promoting the recovery of public spaces as places for social and cultural development, in collaboration with other competent agencies.

Within the scope of living community culture, "Ordinance 1673 Introducing the Metropolitan Public Policy to Promote and Strengthen Living Community Culture within the Metropolitan Municipality of Lima" was approved. Several discussion and participatory construction processes were held for the first draft of the Ordinance. They were led by the Metropolitan Committee on Education and Culture and supported by the participation of 15 Living Community Culture organizations in the city. This was then extended to panel discussions during the public hearings where the Ordinance was discussed. The hearings were held in the four largest urban areas of Lima and supported by the relevant local cultural organizations. Participatory meetings are still held with Living Community Culture organizations to discuss and debate the basis of the Art and Community Contest and the action plan for the programme in 2014.

These ordinances have legitimised and institutionalised the cultural policy of the Municipality and the PCVC, and have created the management tools that have helped sustain the activities related to the promotion, technical and institutional training and artistic training for the population at risk, mostly migrants. This was achieved by the direct availability of public funds and by a large supply of cultural services focused on rights.

The PCVC pursues objectives and goals that reverberate in the principles and undertakings of the Agenda 21. It uses various action strategies targeted at the population it seeks to influence. It includes artistic cultural festivals, artistic training workshops targeted at boys, girls and young people, georeferenced maps with information about the artistic cultural activities of the living community culture organizations, among others. Additionally, in order to strengthen these organizations, we have developed workshops for professional artistic training and workshops to train in the use of cultural design, management and production tools, we have facilitated access to the public budget by granting financial awards and creating spaces to communicate, meet and reflect on culture and local development, and we have enabled the active participation in the processes to formulate public cultural polices. Over 3260 cultural agents (artists, producers and managers) have benefited from these activities.

THE PROGRAMME SEEKS TO BECOME AN ELEMENT THAT RADIATES AND ECHOES THE NEW HUMAN DEVELOPMENT PARADIGMS.

THE GOVERNANCE INTEGRATES THE SOCIAL, ECONOMIC, TERRITORIAL- ENVIRONMENTAL AND CULTURAL DIMENSIONS OF THE PROGRAMME.

4.1. Impacts on the local government

4.3. Impacts on the territory and population

The actions of the PCVC have produced evidence of the work of citizen based organisations that promote culture based processes and initiatives for the local wellbeing and development. According to the studies conducted by the PCVC, 77% of the attendees to the living community culture festivals failed to recognise the groups from their districts that had been performing. However, when learning about their work, 92% of the attendees considered these groups were contributing to the

development of their communities. Additionally, the PCVC has been a dynamising agent to promote the recovery of public spaces in a decentralised fashion, particularly in the case of territories where

the living community culture organisations operate. It has also created spaces for questioning certain citizen related issues, like environmental, gender based, and youth related issues, through arts and cultures. During the festivals, 68% of the attendees said they had been able to reflect on subjects like culture, opportunities for young people, values and respect for the environment, among other topics.

The City of Lima has been a candidate for the first "UCLG - City of Mexico - Culture 21" International Award (January May 2014). The Committee of the Award prepared its final report in June 2014 and requested the UCLG Committee on Culture to disseminate this project as an exemplary experience.

This report was written by Gloria María Lescano Méndez, Assistant Manager of Cultural Promotion and Citizenship. 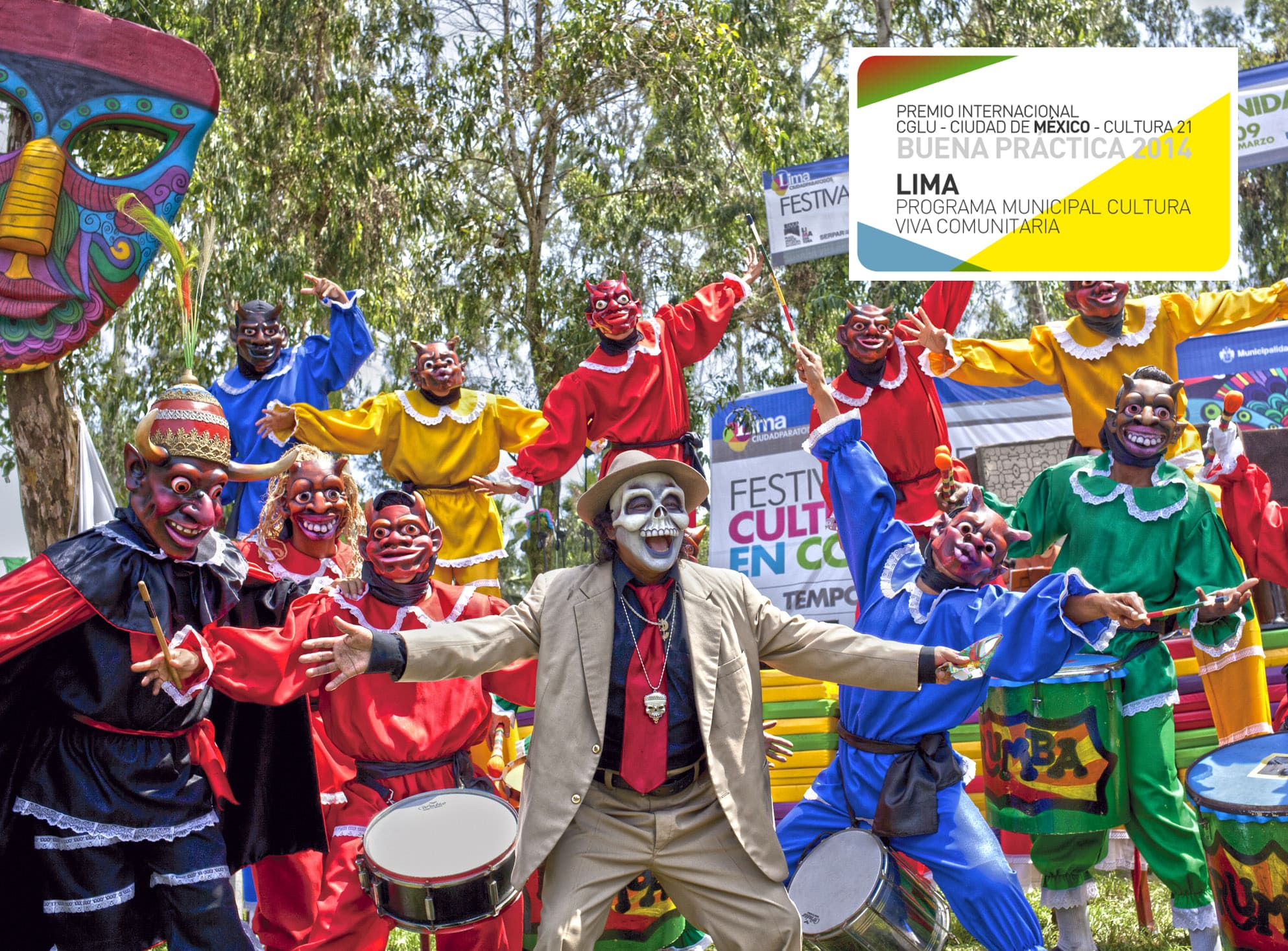