Leeuwarden-Fryslân European Capital of Culture 2018 : culture as a driver

Leeuwarden is the urban heart of Fryslân, the capital of a wilful province with its language and culture. However, the city is high on economic disadvantage and social exclusion. With six disadvantaged urban areas, the city is in the top of the ‘children in poverty top-100’ of Dutch cities. The number of children growing up in poverty is twice the national average. More precisely, the city faces the following issues:

THE GENERAL AIM IS TO USE CULTURE AS A DRIVER FOR SOCIO-ECONOMIC DEVELOPMENT.

The city considers that change through culture is the future and a powerful instrument for socioeconomic development. Culture stimulates the development of openness, connectedness and dynamism. Creative industries, sustainable tourism and cultural infrastructure generate revenues that are invaluable: connectedness, communion, innovation, creativity and entrepreneurship. Cultural policy is the software for change, equal to policies aimed at social cohesion, territorial cohesion and economic development. This makes culture the fourth pillar for Leeuwarden’s sustainable society.

The ECoC project will host 25 large cultural events in 2018 while the long-term development agenda (2013-2025) boasts 70 socioeconomic programmes, the approaches and outcomes of which will be presented at the ECoC events. Since 2014, the city ensured that all children under 12 receive cultural education, with expansion into secondary education since 2015.

Moreover, Leeuwarden’s vision of culture and its practical execution seamlessly fit the ambitions of the Agenda 21. Among others, the city highlights the interdependent relationship between citizenship, culture, and sustainable development. Secondly, provides an international framework supported by commitments and actions that are both achievable and measurable. Thirdly, harness the role of cities and local governments as authorities in the development and implementation of policies with and for citizens and finally to acknowledge and utilise the essential role of culture as defined in the United Nations Post-2015 Sustainable Development Agenda.

The general aim is to use culture as a driver of socioeconomic development. The city use cultural participation and capacity-building as an integral part of a long-term policy aiming to offer a stronger economic and social structure to all inhabitants.

The Leeuwarden City Council and the Province of Fryslân signed a cooperation agenda for 2013-2025, describing the projects carried out by the local and/or regional political authorities to reach the goals mentioned, with special focus on Culture, Sustainability, Tourism and Marketing.

The project aims primarily to include the entire population of Leeuwarden-Ljouwert and Fryslân in the events because the city is aware that needs everyone’s input to find solutions to tackle urgent issues. However, also wishes to include its surroundings neighbourhoods and to other parts of Europe.

The trend of tackling problems locally leans heavily on the principles of ‘mutual self-reliance’, meaning a high demand on the role of the government. However, the local government chose the position of ‘smart facilitating government’, in which public money is allocated to facilitate civilian initiatives and cooperation. The ECoC project includes two open programmes for those civilian initiatives. Therefore, the local government counts on the strength of the community to answer arising questions.

LEEUWARDEN IS AWARE THAT NEEDS ALL ITS INHABITANTS INPUT TO TACKLE URGENT ISSUES.

The programme will have an impact on all inhabitants of the City. To do so, new angles were chosen to approach the events in terms of programmes (including online), methods, themes, locations and communication strategy. Moreover, it is expect that the citizens get a greater sense of pride of their own city and of the part they have played in its development.

Listed below there are some of the impacts seen in the last three years:

CULTURAL EDUCATION PROGRAMME FOR PRIMARY SCHOOLS NOW REACHES 100% OF CHILDREN UNDER 13, AND WAS EXPANDED TO 4 SECONDARY SCHOOLS IN 2015.

In line with Leeuwarden’s ambition to become ECoC 2018, the City and the Province have formulated an explicit joint policy for the long term. For its coordination and implementation, the alliance partners have set up an integrated programme group. To ensure continued effects after 2018, the goals have been recorded in the cooperation agenda signed by both governments, which runs until 2025. In terms of the cultural aspects of this agenda, the national ministry of education, science and culture (OCW) stated that the city and region are to be seen as a national example on using culture as a social and economic driver.

The city of Leeuwarden was a nominated candidate for the second 'UCLG International Award - Mexico City - Culture 21' (January-May 2016). The awards jury produced a final report in June 2016 and asked the UCLG Committee on Culture to promote this project as a practical example for the implementation of Agenda 21 for Culture. 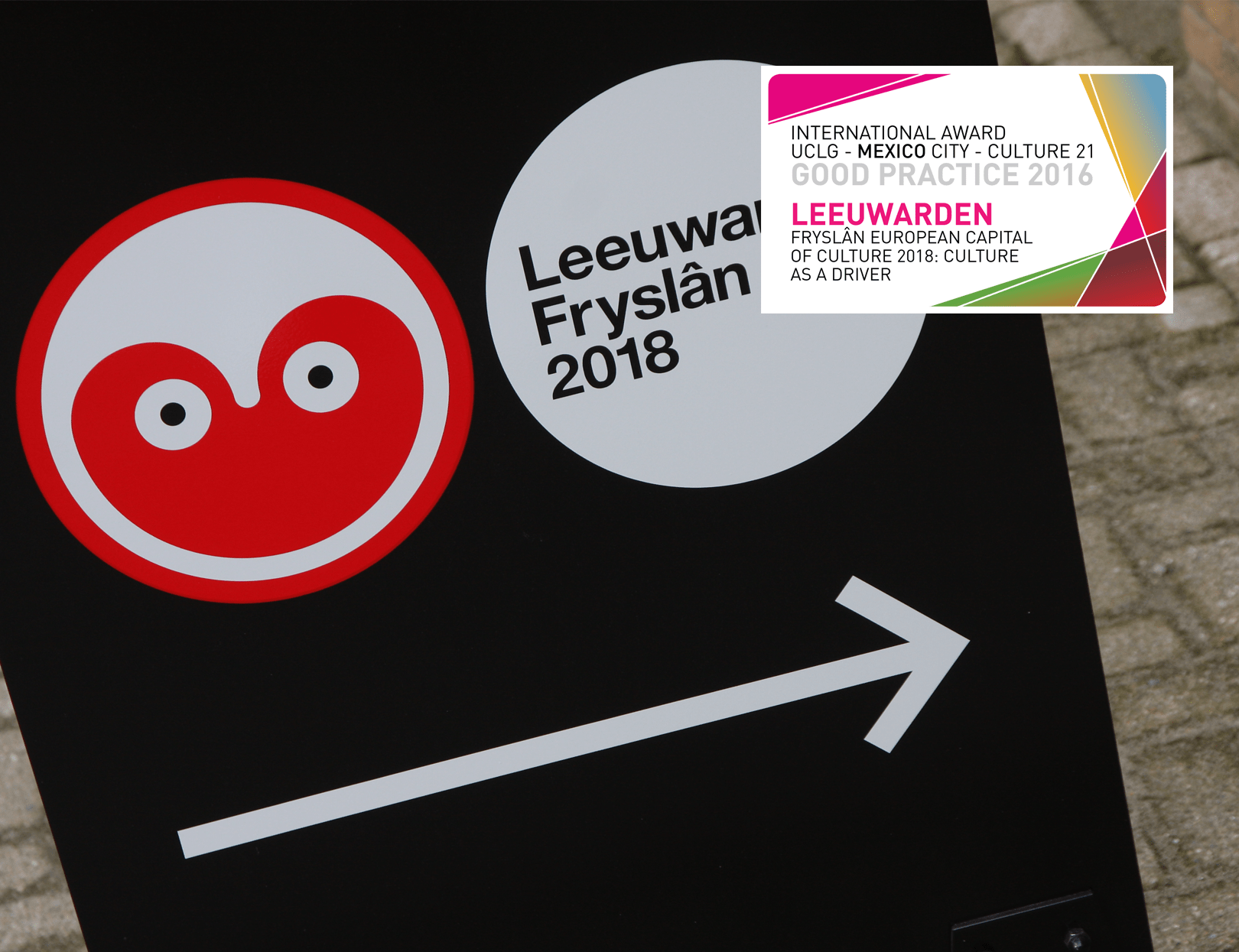