Esch-sur-Alzette is the second-largest city of Luxembourg, with 35 000 residents. The steel crisis of the 1970s and Luxembourg’s subsequent rise to an international financial centre redistributed power in the country. This rise was mainly concentrated in Luxembourg City with its European institutions and banks; in the process, Esch fell behind. The financial and accompanying social gap between Luxembourg City and Esch is immediately visible.

Another important aspect is the consideration given to the notion of “living together” in a city like Esch, a city with a small number of residents and yet representing over 100 different nationalities. The particularity of the city and its territory resides in its industrial past and industrial wastelands making it a real challenge for urban planning. It is undeniable that after past and future rehabilitations of those wastelands, the city will have to find new ways to link up old a new city parts and facilitate mobility on its territory.

The cultural strategy [CONNEXIONS] was adopted in June 2017 by the City Council. It is the result of a long process and it’s the product of a thorough analysis of the strengths, weaknesses, opportunities and risks that impact culture in Esch. It is in line with the 9 commitments of Agenda 21 Culture. The intention is to transform Esch-sur-Alzette into a creative cultural centre, recognised for the diversity of its culture and its capacity of innovation and creation.

The last decades have given rise to a cultural policy that aims at putting the citizen at the centre of decision making and allowing thus enabling an active participation, mediation and transposition of the project. To enable connections, the city together with Kufa have launched the Urban Art project in 2014. This project aims to increase cohesion by making inhabitants work together on the same project.

Urban Art aims at creating a collection of works and so establishing an open-air museum offering connections throughout the city. It is one part a touristic and artistic tool, on the other hand it can be the answer to the question on how to link up different parts of town amongst themselves and with the centre.

Urban Art is perfectly in line with the city’s strategy as it supports the 5 priorities of the strategy:

Urban Art is perfectly in line with the 5 strategic priorities of the city: bolster creation, support local economic cultural development, encourage cultural diversity and access for all, encourage both cultural education and access to formal and informal education, enhance both the external and internal image of Esch.

Education: Offers a large selection of education programmes to a large audience with a strategy placing value upon local cultural resources. The project is a platform for bringing together public, private, and civil society actors in the field of culture, education, and ongoing education.

Legacy / Partnership / Prosperity / Governance: The actions are federated by a charter and a guide of good practices–which brings together actors in the areas of culture, equality, and social inclusion, ensuring its philosophical and practical sustainability, beyond 2022, building on cultural collaborations among local, regional, and national levels.

Environment / Planet: Kulturfabrik has been developing a green philosophy over the years, as well as a green charter which goal is to be transparent and communicative by raising awareness amongst the partners, audiences, teams and artists.

Information and knowledge: The programme enables partners and public to participate in cross-border cooperation cultural activities, guaranteeing freedom of expression and respect for cultural diversity.

The general aim is to sensitize the largest number of citizens, by showcasing how the principles of a sustainable cultural development can be shaped and become visible:

The cultural strategy [Connexions] was adopted in 2017, is the result of a long process of thorough analysis, and is well in line with the 9 Commitments of Culture 21 Actions.

Having the urban art as golden thread the project makes use of the urban space to create a sort of artistic laboratory and develop co-working between the population, in particular side-lined communities, without any possibility to participate in social life such as cultural activities. Several workshops lead to an inclusion of these minorities in order to found a pleasant creative working space. The project will end in 2022 when Esch will officially be the European Capital of Culture, by the launch of the open air museum across the city and Greater Region, providing the opportunity to showcase every artwork implemented from 2014 to 2022. The Kufa’s Urban Art Esch wants to change the urban space permanently and to increase the social cohesion through art. Since 2014 it offers, every year during 4 months, a collaboration between local and international artists, as well as pedagogic activities, days of sensitisation and a multidisciplinary festival as finalisation.

After the municipal elections in 2017, the city saw a very symbolic shift to the right when it was traditionally a left-wing commune; however, the new municipality decided to continue to support the project in collaboration with the socialist party.

Improve participation by inhabitants most distanced from everyday cultural life, regardless of their age, background, or socio professional identities was a real challenge: lack of participation, lack of historical awareness, isolationism and exclusion, the feeling of being second class citizens (industrial areas), sense of identity shifted negatively, niche society, social diversification, language barriers, Insufficient professionalisation, no college of art in Luxembourg, outdated legal parameters for the sector.

Kufa’s Urban Art project produces several positive impacts in Esch-sur-Alzette, in the Greater Region and its populations. Since December 2016, Esch is officially a pilot city for Agenda 21 for Culture. On this basis, the initiatives for a cultural strategy for the time period 2017-2027 were fine-tuned and some of the commitments of the Agenda 21 were linked to the cultural policy. It defines specific areas of action and goals that are closely linked to Esch 2022, but will have an impact over a much longer period of time, from 2017-2027. These impacts are evaluated in terms of tangible and intangible effects.

The cultural strategy CONNEXIONS has been approved by the City Council in 2017. This is a first for the Grand-Duchy of Luxembourg as no other city or town, not even the government at a national level, had adopted a cultural strategy at the time.

An evaluation covering all aspects of the city is under study, this should allow to generalize the evaluations on quantity and quantity for all cultural institutes and their projects.

Agreed measures to be undertaken for a better impact of the actions were: setting up a governance structure; developing a cultural ecosystem; commissioning studies and evaluation; and further training for stakeholders.

Esch saw a shift to the right, in the 2017 municipal elections; a very symbolic shift in this traditionally left-wing commune. However, the new municipality decided to continue to support the Kufa’s Urban Art project, in collaboration with the Socialist Party. With regard to Esch 2022, the new municipality see the, in perfect harmony with the cultural strategy of the city and wish to still supporting and developing the project. The local government co-finance the project and invest each year around 75000€. 4 departments of the city are fully involved on the process: the Youth Department (Conception and management), as well as the Urban planning Department, Green Spaces Department and Technical Department (Logistical Support).

Esch-sur-Alzette was a candidate for the third "UCLG Mexico City – Culture 21 International Award" (November 2017 – May 2018). The jury for the award drew up its final report in June of 2016, and requested that the Committee on Culture promote this project as one of the good practices to be implemented through Agenda 21 for culture. 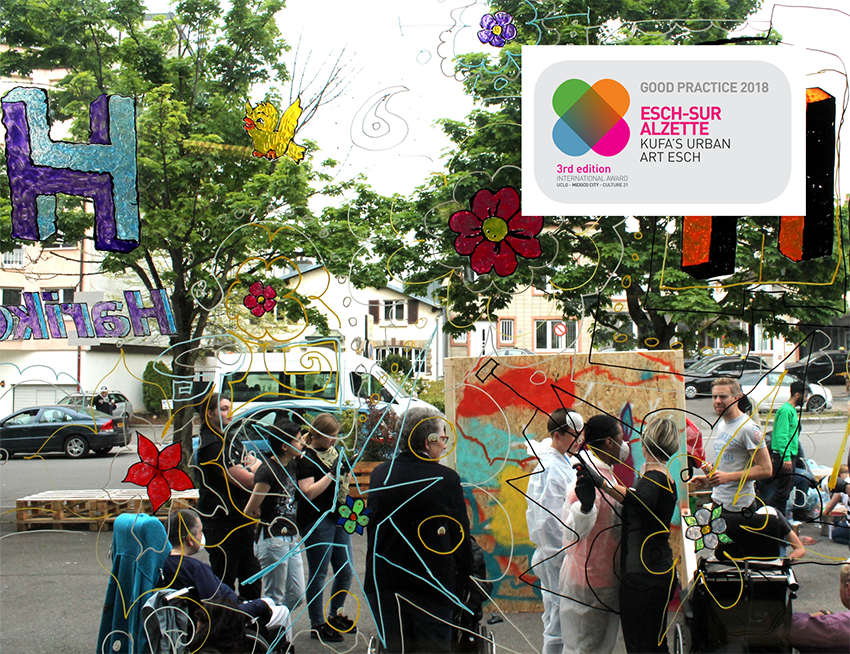