Located in Seoul, Jongno-gu has played an important role in the administration, politics, economy and culture of the city. Jongno–gu has about 150,000 residents, but its historical and cultural properties (including the World Cultural Heritage Jongmyo Shrine) attract 10 million foreign visitors each year.

During the 1970s, it was a working-class neighbourhood known for the thousands of sewing factories that fed the Dongdaemun fashion Market. However, with the decline of the sewing industry in the 2000s, it had deteriorated. Its designation as a redevelopment site in 2007 caused conflicts among the residents, 90% of whom opposed the redevelopment due to economic hardships. During this time, it became the slum town of Seoul.

Under the policy of ‘Human-centered Smart City, Vibrant Culture City’, Jongno-gu has endeavoured to make the Changsin-Sungin an area with robust local economy driven by culture and art. By leveraging cultural resources in the community, Jongno-gu aimed to spread the value of culture through sustainable and creative strategies.

Changsin-Sungin faced many challenges: the decrease in local population due to conflicts and the negative image of the town, a struggling local economy and aging population, old buildings shacks, and the need for improved infrastructure. Jongno-gu recommended that the community apply for the Community-Participating Urban Regeneration Priority Region Project offered by the central government in 2014. Changsin-Sungin was designated as the Korea’s first Urban Regeneration Priority Region with support of Jongno-gu and Seoul City.

The objective of the project is to create a self-sustained regeneration model that enables the recovery of the community.

The objective of the project is to create a self-sustained regeneration model that enables the recovery of the community.

Rejuvenation of the economy

The project’s approach has been community-led, and priority was given to community-based cooperatives and organisations to operate and manage the community facilities. The Changsin-Sungin town used to be a notorious cultural wasteland in Jongno-gu. However, as the project created spaces for culture and art, and as it attracted artists, networks formed, enabling the community and artists to learn from one another. The community is also working together on issues such as job creation, economic infrastructure, and its future directions. Other communities in Jongno-gu are following Changsin-Sungin’s leading example.

In 2016, as one of the project initiatives, the Hansung University students and the community sewing masters collaborated to produce women’s clothes. In 2017, they collaborated with the youth for the KT&G’s Imaginative Fashion Week Contest. In 2018, they also started to offer the Sewing Master Academy for young fashion makers, which engaged masters to provide special on-site education to help youth gain employment and start a business. Graduates from the Sewing Master Academy Denim Special Course founded the Changsin Denim Research Institute, creating synergies with the existing sewing infrastructures by launching the community’s own denim brand GMH.

The sewing industry is also becoming more robust with the invigorating alley business, community enterprises, and collaboration with youth.

Through the project the community became more cohesive and sewing workers became prouder of their history. The sewing industry is also becoming more robust with the invigorated alley business, community enterprises, and collaboration with youth. In total, the project reached around 29,000 local residents.

The Urban Design Institute of Korea supervised five monitoring meetings, four on-site monitoring visits, surveys, and a focus group interview from July 2017 to December 2017. In addition, it evaluated the opinions of 200 residents on the project implementation, participation, and effectiveness. Jongno-gu and the Seoul City are continuing to improve infrastructures and the CRC is creating jobs and planning to leverage the community facilities for start-ups support.

As the first urban regeneration priority project supported by Seoul City, the project became the model case for a culture-art led urban regeneration received the ‘Presidential Award’ in Spatial Culture Grand Award 2019) A total of 166 teams and 3,442 people visited during 2017 to 2019. Importantly, artists, experts, and community activists have joined the residents to establish a co-governance platform.

The CRC was born as the first community regeneration corporation in Korea and it uses community assets to create jobs and implement sustainable regeneration. Currently, there are two public parking lots, the youth culture facility, and the public library under construction. Additionally, there were two other ongoing elements developed: a cultureart platform involving artists, community activists, and the residents; and the launch of the Jongno-gu-supported brand GMH, formed by sewing factories and young fashion designers.

Jongno-gu was a candidate for the third “UCLG Mexico City – Culture 21 International Award” (November 2019 – May 2020). The jury for the award drew up its final report in July of 2020, and requested that the Committee on Culture promote this project as one of the good practices to be implemented through Agenda 21 for culture. 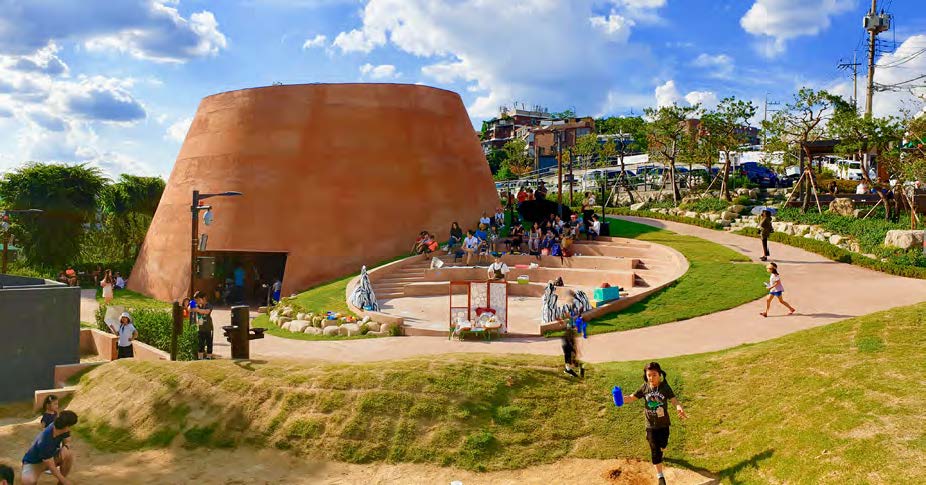