The French Shore historical society (FSHS) : the development of Conche through heritage, identity and culture

Conche is a small fishing village in the northeast coast of Newfoundland (Canada) with 225 habitants. Its excellent harbour and grassy slopes were first used by hunters and fishermen 5000 years ago. In the early 16th century French migratory cod fishermen first established at Conche. The French ceased their fishery in 1904, but it continues to provide income for its permanent residents to this day.

The eastern side of the Northern Peninsula is rich in French History. This area was important to the French Migratory Fishery for over 400 years and it was especially noticeable in Conche. The community was officially incorporated as a town in 1960. Local governance structure includes an elected mayor and town council. There is a Volunteer Fire Brigade, a Harbour Authority, parish committees and a school. In 1992 the Canadian federal government declared a moratorium on commercial cod fishing. Since then Conche and surrounding towns have struggled to find economic and cultural stability. When the French Shore Historical Society was inaugurated, Conche did not have a formalized council and with the announcement of the Cod Mortatorium in 1992, the town was rapidly losing its heritage. With the migration of its young people, culture started disappearing. To diversify income opportunities and retain community cohesion, Conche turned to its history to develop heritage tourism and related educational and cultural programs.

In 2000 a group of residents founded the French Shore Historical Society (FSHS) as a formal organization to present the region’s history and culture. The project started as a civil society initiative and a way to self-organize and promote a new way of development for the community. Soon, the Town was convinced by the citizen initiative and supported it. The FSHS created a museum and cultural centre for local people and an attraction for tourists.

The aim of the project is to diversity income opportunities and retain community cohesion through Conche history, identity and culture.

Conche doesn't have a cultural policy and the project of the FSHS emerged to respond to a difficult context. The Town Council was recreated in 2005. The FSHS works as the cultural policy for now. It has policies in place for itself and the Interpretation Centre and it partners with the Dept. of Tourism and the Museum Association of Newfoundland and Labrador to develop policies to protect the museum and its artefacts.

The FSHS is an answer of the community to encourage new developments through heritage and culture in a small community struck by economic problems. It is related to the Agenda 21 for culture and Culture 21 actions sections:

The aim of the project is to diversify income opportunities and retain community cohesion through Conche history, identity and culture. The creation of the French Shore Historical Society aims to conserve and preserve historical and material culture and to develop heritage tourism and related educational and cultural programs.

The town provided a building for the museum and several groups worked to raise funds for renovation and exhibit development. In 2000, the old Grenfell Nursing Station was renovated into the French Shore Interpretation Centre to house an exhibit and artifacts relating to the French Migratory Fishery. This building became a cultural resource and is a growing attraction for tourism. This past year an extension was added to house the French Shore Tapestry.

Work on this project was provided by local craftsmen, volunteers, town staff, and regional government agents. FSHS has a manager and Board of Directors who communicate with the town to expand and maintain a growing heritage infrastructure and programs. Because of the small size of Conche, shared activities, duties, and programs are as often developed through informal exchanges of ideas as well as through formal council meetings. There are a number of groups and committees in the French Shore region, which include representatives from the town and FSHS that develop and work on heritage development projects. Tourism businesses also play a role. Residents wear “several hats” and collaboration is key to sustaining the economy and lifestyle. FSHS has also reached out to cultural groups in France that share their history. The outreach has resulted in joint publications, conferences, and exchanges of museum staff.

The FSHS is an answer of the community to encourage a new development though heritage and culture in a community struck by economic and social problems.

Some of the partner entities of the project are:

The building hosting the French Shore Interpretation Centre is owned by the town of Conche and it is given to FSHS rent free. The Dept. of Tourism, Culture, Industry and Innovation of the provincial government of Newfoundland and Labrador – is a funding agency for community capacity programming, training workshops and conferences, heritage grants for museums, professional fees and small business marketing programs. TCII have been consistent partners with French Shore Historical Society in every project completed. The Dept. of Advanced Education and Skills – funding agency for training employees and labour development. Service Canada – Federal agency that provides funding in the form of grants for summer students.

All the residents of Conche directly benefited from this project through economic development of their town. The Town itself sees over 2000 visitors every year. It enhances the economy through area restaurants and accommodations. The museum receives monies through admission fees and the gift shops. Local residents sell their crafts in the gift shop of the museum and local stores.

In 2000, the Town have lost its town council, and now, due to the revival of the town (trough cultural action and others factors), the town council was recreated in 2005. When the FSHS was formed it gave its inhabitants a place to save their heritage and culture. People started to donate historical objects and the centre became a place that was trusted to take care of those artefacts. Research with the local residents and Memorial University gave the people a sense that their stories were important and the Centre began to get a reputation as a community heritage centre.

The project improved its communication and dialogue with local citizens and its image as an open and progressive local government.

The French Shore Historical Society has provided income to local residents, employs several part time embroiderers, summer students and has a manager employed seasonally. The entire town of Conche was directly involved in all phases of this project.

The residents directly benefited from this partnership through enhanced economic development of their town. They have been directly involved with the development of the French Shore Interpretation Centre from its first temporary exhibit to its now internationally recognized exhibits. They were instrumental in the research stage and in the final stage of promotion. Local carpenters were hired to transform the derelict building into the Centre it is today. Thirteen women were employed in creating the French Shore Tapestry and there are two –three local women employed during summer season with local summer students.

Employment opportunities have increased with the growth of a tourism industry. Small craft businesses, local accommodations and area restaurants have seen growth in their sectors due to visitors coming to view exhibits and enjoying cultural experiences in Conche. Indirectly the spin off has been astounding with the accommodations seeing an increase of bookings and restaurants reaping the benefits of extra visitors coming to this area.

Low-cost cultural services are available for all groups of the society, engaging socially disadvantages audiences.

The FSHS is a permanent organization and has continuity in time.

Conche was a nominated candidate for the second 'UCLG International Award – Mexico City – Culture 21' (January – May 2016). The awards jury produced a final report in June 2016 and asked the UCLG

Committee on Culture to promote this project as a practical example for the implementation of Agenda 21 for Culture. 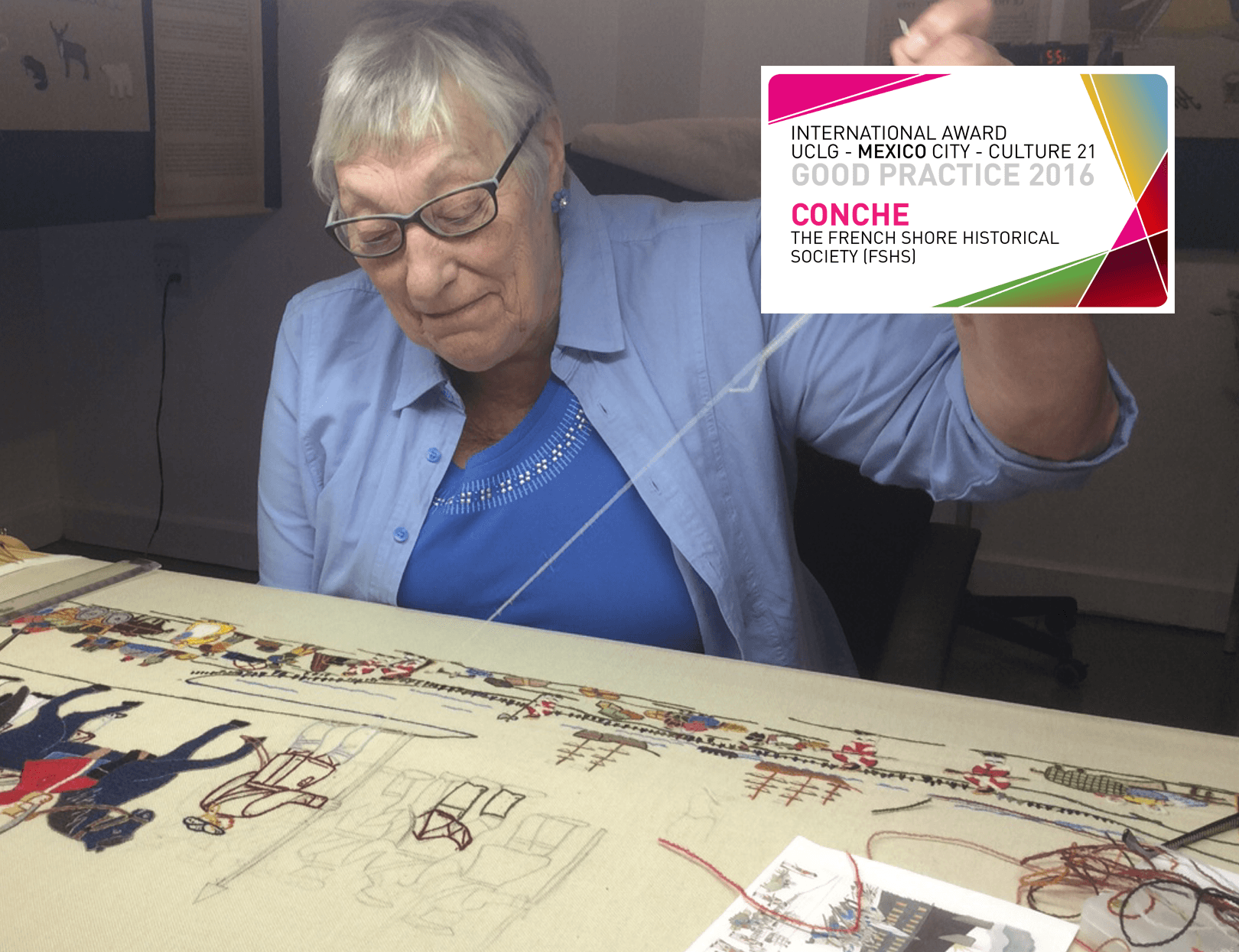