Cultural mediation in the City of Longueuil

Longueuil is one of the most urbanised areas of the Montérégie region. It is divided into three boroughs, with a population of 242,701, and certain areas comprising a large part of the disadvantaged population which is far-removed from cultural life.

Developing cultural activity by closing the gap between isolated communities and cultural life supports the enrichment of quality of life for everyone. Longueuil hopes to provide means and empower significantly disadvantaged citizens, as well as provide support for over 350 local cultural and community organisations. The Board of Culture and Community Life works toward featuring professional artists and community organisations.

For the development of cultural policy, Longueuil has endeavoured to establish synergy among cultural, social, community, and urban development. Over time, the city has sought to ensure diversity, authenticity, and boldness in its cultural life by developing long-term partnerships with a number of local cultural, community, and economic entities.

The reference point for this emerged in 2012 after careful consideration and should be used as a working tool in pursuing activities through cultural development agreements, as well as through action plan initiatives by the Board of Culture and Community Life. In order to implement these, the city has provided professional artists and professional cultural organisations with the tools, means, and services necessary for encouraging cultural activity and meeting the needs of a population deprived of a cultural life.

THE AIM IS TO DEPLOY STRATEGIES GEARED TOWARD CLOSING THE GAP BETWEEN ARTISTS, THEIR WORK, AND CITIZENS.

The cultural policy adopted by Longueuil in 2005 was an active response to the population's desire for cultural development, dialogue, diffusion, and participation. Additionally, there was an apparent need to emphasise the importance of accessibility to cultural life for all citizens, as it paves the way to inclusion.

Under this policy, three triennial cultural development agreements were made with the Ministry of Culture and Communications (MCC), which were carried out in 2007, 2010, and 2015. The Board of Culture and Community Life and the Longueuil Council for the Arts were created in 2010. In 2012, Longueuil developed a framework for cultural mediation that enabled more concrete involvement by the city in the social, physical, and psychological development of individuals that are interested in actively experiencing cultural life. Considering the socio-economic status of the population, partnerships have been established among organisations representing the community, culture, professional artists, and regional cultural activities. As a result these created the following cultural mediation actions.

The City of Longueuil is a signatory to Agenda 21 for Culture in Quebec. Cultural actions shall be carried out under the auspices of sustainable development or identity of the city, and shall emphasise the value of artists and citizens. Both local artists and citizens actively participate in the social and economic development of the city. With the aid of community partners, Longueuil has been able to improve access to culture. Beyond this it has improved interaction between disadvantaged communities and all artistic disciplines, including heritage, archaeology, performance arts, visual arts, and street arts, among others.

The aim is to "deploy strategies and actions geared toward closing the gap between artists, their work, and citizens, particularly for groups that are far-removed from cultural life due to social, economic, or territorial factors." (Practical guide, Les Arts et la Ville [Arts and the City]). The importance of the approach must take precedence over the end result.

Since 2012, nearly 150 cultural mediation projects have been implemented by the Board of Culture and Community Life, cultural and community organisations, as well as both professional artists and creators from the area. The City has attributed a large importance to the triennial agreements made with the MCC, which would make it possible to share funding.

A key step in this process involved establishing a framework that targeted disadvantaged groups, with the aid of organisations and professional artists, in order to provide them with access to quality services. In addition to developing guidelines and promoting the initiative, several meetings between cultural and community organisations took place. There was also a call for proposals, and the implementation of many projects was selected by a jury of cultural professionals.

The challenges pertained mostly to supporting artists. A cultural mediator was recruited, on an ad-hoc contract, to assist and oversee both artists and organisations in their initiatives without interfering in the project.

THE POLICY ADOPTED IN 2005 WAS AN ACTIVE RESPONSE TO THE POPULATION'S DESIRE FOR CULTURAL DEVELOPMENT, DIALOGUE, DIFFUSION, AND PARTICIPATION.

Additionally, the Board of Culture and Community Life has a regular budget for implementing cultural mediation projects. Since 2008 projects have been carried out with professional cultural organisations, emerging professionals, and even professional artists' exhibitions at the cultural centre. Additionally, since January 2012, the latter of these has resulted in planning 4 artists' or cultural organisations' exhibitions annually. At each exhibition, cultural mediation activities complement the scheduled initiatives, such as making art workshops exciting for community groups or schools in disadvantaged areas, with the artists themselves. The Board of Culture and Community Life provides these activities to certain groups for free at each exhibition. The cultural centre is also listed on the MCC's cultural resource registry in order to ensure schools have transport to art workshops at a lower cost.

Up until now, over 2,000 people have participated in cultural mediation projects. The City has plans for initiatives in the health sector (hospitals, CLSCs (local community service centres), youth centres, and CSSS (health and social services centres), among others.

NEARLY 150 PROJECTS HAVE BEEN IMPLEMENTED BY THE BOARD OF CULTURE AND COMMUNITY LIFE, CULTURAL AND COMMUNITY ORGANISATIONS, AS WELL AS BOTH PROFESSIONAL ARTISTS AND CREATORS FROM THE AREA.

Longueuil has established a framework for cultural mediation for all the cultural organisations in the region. The city defined its activities and used this framework as a lever to sign a third cultural development agreement with the MCC. This allowed it to undertake transversal and horizontal work with cultural and community organisations, as well as with the area's schools.

The cultural mediation programme has benefitted disadvantaged social groups, and thus has had a significant social impact on participants.

After each activity, satisfaction surveys were carried out with participants which made it possible to evaluate and review specific actions throughout the programme. In the coming months, the Board of Culture and Community Life will develop more effective indicators for evaluating these actions. Discussions with a consultant are ongoing about assisting municipal stakeholders.

The City of Longueuil was a candidate for the second "UCLG Mexico City – Culture 21 International Award" (January - May of 2016). The jury for the award drew up its final report in June of 2016, and requested that the Committee on Culture promote this project as one of the good practices to be implemented through Agenda 21 for culture.

This article was written by Christian Laforce, Head of the Board of Culture and Community Life, Longueuil, Quebec, Canada. 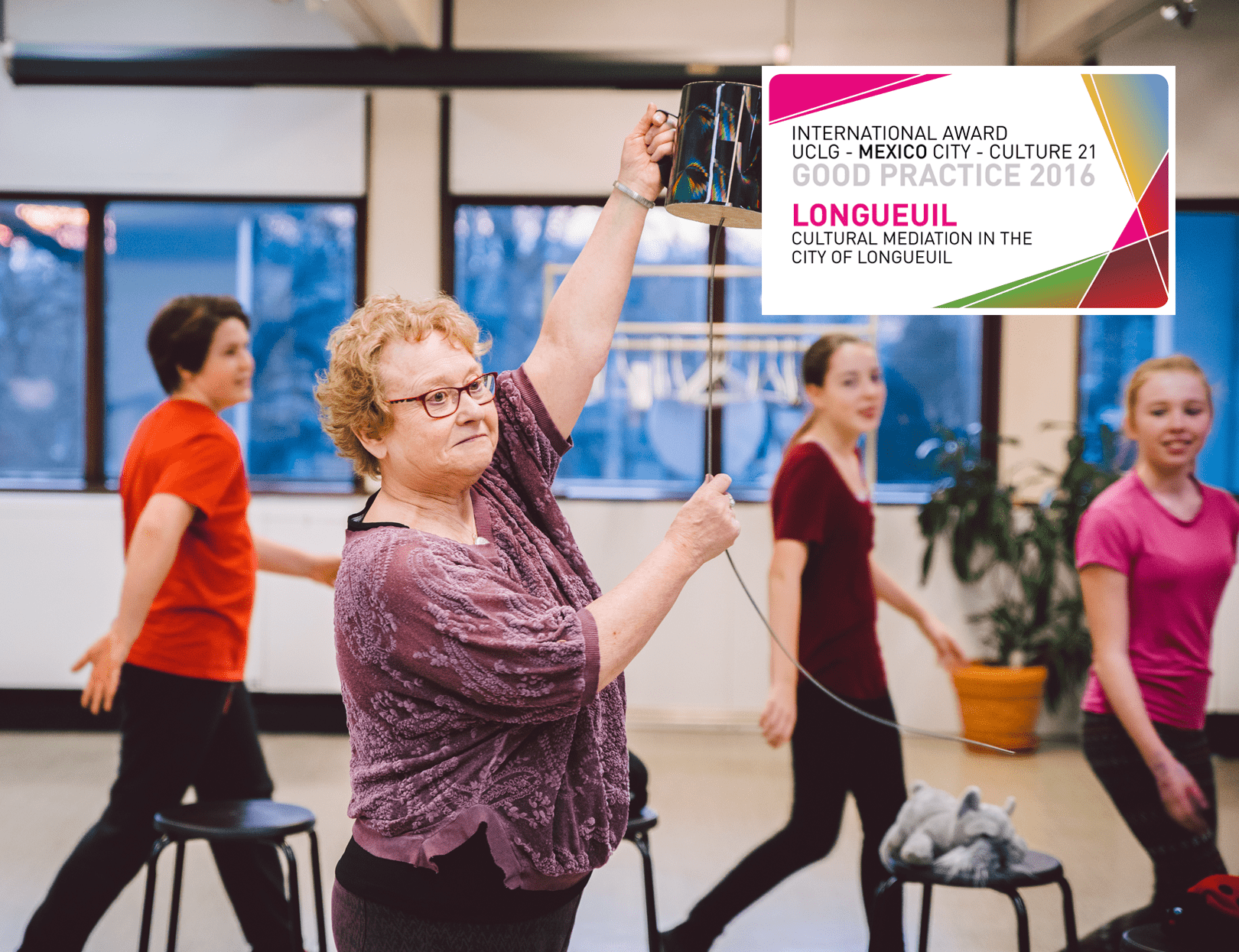