Montevideo is the capital city of Uruguay and the most populated city with 1,318,755 inhabitants. Municipality D, where this program has been implemented, has a population of 180,963 inhabitants. The program was developed in the Municipal Ward of Casavalle, characterized by critically low socioeconomic levels. 35% of the population is under the age of 24, some 58% of homes are poor, and 1.6% lives in situations of extreme poverty. The entire zone has a severe lack of education, where up to 30% of youth do not study or work. SACUDE has a long history in the area. Its origins date back to the 1950s when it emerged in the outskirts of the city as a neighbourhood made up of municipal workers. For a long time it played an important role in community life, having its own polyclinic and theatre, and where neighbourhood committees were vital, given the fact that it was an area with limited access to the city-centre. With the crisis of the 1960s affecting the labour sector first, the neighbourhood saw economic and social regression until the 1980s when the area turned into slums with a high index of unsatisfied basic needs. To face this situation, a strategy in the Territory and Sustainable Development Planning Guidelines was defined thanks to a resolution establishing the Casavalle Council (interinstitutional space connecting territorial, environmental, economic, and social dimension).

The aim of the projects is to contribute to comprehensive human development though the implementation of a centre for citizen cohabitation in the casavalle zone. The goal is to apply citizen rights to health, sports and culture.

SACUDE was constructed in 2010 within the framework of regularising the zone's three settlements. Inhabitants decided that 40% of the program's budget would be issued for covering sanitation costs for their homes, any required reinforcement of infrastructure, and services provided by the Municipal Club, and the Polyclinic, resulting in the construction of the complex, and contributing to social inclusion policies through culture. As a result, SACUDE set a benchmark for striving to improve inhabitants' quality of life by promoting its democratic access to culture, sports, and health care. It is a model for multilevel and multi-actor activity.

Over the last 25 years Montevideo has developed a management strategy for social, cultural, heritage, and urban programs that is decentralised and participative. This directly relates to the idea of the citizen as the focal point for rights. Since enacting the law of Decentralization and Citizen Participation, a third level of governance was created that paved the way for the implementation of 8 municipalities in the department of Montevideo. This deepens and provides continuity for city management acts like coordination and empowerment, turning them into shared tasks that place emphasis on local spaces with a global perspective.

Two of the core concepts that permeate throughout planned policies by the Municipality of Montevideo Ministry of Culture are the decentralisation and democratisation of culture. They are about mainstreaming cultural policies, creating spaces and work groups that address needs. The latter may include emphasis on living heritage, their tangible and intangible heritage, and focussing in particular on populations with fewer opportunities. Envisioning culture as integrative and inclusive raises the need for establishing specific training, investment in human resources and high quality infrastructure, as well as equitable planning for central and peripheral resources.

About 2 500 per week participate in events for culture, sports and the promotion of health, making the project their own, thus enriching the area's daily life.

Montevideo continually adheres to an idea of action and knowledge of other networks, like those of Agenda 21 for culture. As a result, there is a natural coincidence between its principles and those of the SACUDE project, based on the recognition of the existing cultural diversity, and guarantees the right to difference while providing citizens with the necessary conditions for their full integration.

SACUDE is a socio-cultural space that prioritizes access to education, culture, sport, and health for everyone. It endeavors to implement various proposals committed to various expressive and creative needs of everyone. Special emphasis is placed on instilling a culture of inclusion with regards to gender, race, ability, and religion.

The aim is to contribute to comprehensive human development through the implementation of a centre for citizen cohabitation in the Casavalle zone. The goal is to apply citizen rights to health, sport, and culture.

This experience contributes to social inclusion through culture. SACUDE se a benchmark for striving to improve inhabitants' quality of life by promoting its democratic access to culture, sports and health care. It is a model for multilevel and multi-actor activity.

Neighbourhoods are wells for values whose focus on learning is for the preservation and maintenance of human solidarity, commitment to others, and a clear collective awareness. The Municipal neighbourhood has been transformed into a zone with a young population and enormous problems with dropouts, drug use, and adolescent pregnancy. SACUDE, offers a space for community life, making it into a benchmark for developing. Youth training programs were established for those who had abandoned the formal education system:

SACUDE was visited by many representatives, BID delegates, mayors from many Latin American and European cities. All of this helped spread and nourish other concepts like the programme's visibility.

The aim was to reverse policies from within the centre. It also sought to universalise access to cultural goods and services, bringing products from the centre to SACUDE, as well as making the population of SACUDE one of the city's cultural offerings.

In order to provide access for all residents to performances staged on Montevideo's cultural tour, trips to museums, cinemas, dance, and theatre, paths to the beach, parks, and plazas were organized, providing close interaction with quality artists, and in order to tear down symbolic walls between them and to build positive ties connecting the population with the rest of the city. A "Free Pass" was made available, granting free travel on public transit during the summer and school holidays. Many artistic events were brought to the city outskirts, putting on cultural events in SACUDE for: cinema, theatre, dance, Murga, folklore, symphony, philharmonic, and photography exhibits, etc.

The SACUDE project is based on the recognition of the area's existing cultural diversity, and guarantees the right to difference while providing citizens with the necessary conditions for their full integration.

SACUDE has positioned itself in the community as a landmark institution for establishing many public policies for different local and governmental institutions in the promotion of human rights. Specifically, it favours access to education, culture, sports, and health care. These strategies are vital in protecting and bolstering human rights in the city because they ensure an ongoing joint effort between grassroots organisations (local authorities, citizens, and civil society organisations) that introduce a cultural dimension into public policies, thus benefiting more vulnerable or discriminated groups whose conditions exclude them from society. In line with this, an aspect of multilevel and multi-stakeholder public coordination was put in place. Strategic planning developed offers a clear framework for intervention from all actors involved. This subsequently promotes complementarity for actions in the area that serve as mechanisms to bridge cultural gaps.

As a result of this policy, the Agglomeration Agency was established, with the task of intervening in the planning, implementation, coordination, and evaluation of the processes in the territory. Three (3) subcommissions were implemented for each area of health, culture, and sports, where residents prioritise, plan, and manage activities. Twelve (12) work committees were formed with residents.The SACUDE Civil Association Fellowship was created as a legal identity composed of more than 40 residents, whose objective was to support SACUDE in all areas.

SACUDE is emblematic of cultural policies that translate a process of exchange into a model for cultural planning and management whose focus is comprehensive human development. The Centre is also a civic hub that extends through diverse zones and settlements that require special attention, due to the fact that many second- and third-generation families born in poverty live here.

It has succeeded in questioning and changing the territory's cultural actors, incorporating a dimension on housing, health, employment, education, and a fundamental aspect of human rights. The territory's actors are recognized for their leadership and citizen participation has become incorporated into the area. It has become a benchmark for other cities such as Contagem and the visit of the mayor of Madrid with whom the next exchange was developed.

SACUDE is a defining project in the area, granting residents access to services they did not have before. The building's facilities creates citizenship and reclassifies the territory which creates a sense of belonging to the area's centre. It creates conditions for engaging the most vulnerable populations, namely youths, and linking them with the education system and work training. For adults it is a shared space for them to enjoy, which also provides education services for the area.

Being a project with a comprehensive approach, impacts are interrelated and the agenda focuses on human rights. The experience of SACUDE demonstrates tangible and intangible. With regards to its economic dimension, a system of employment training and labour integration coordination was developed. In the social sphere, the major impact was in the personalised attention to family and community integration. In terms of health care, neighbourhood polyclinics served the population of SACUDE and incorporated a cultural dimension into health prevention and attention programs. In terms of urban interventions, another major impact was SACUDE's reclassification of the territory through improvements in health services, education, parks, lighting, and civic services.

Evaluation is a carefully considered part. The model planned for an evaluation system in different areas:

The program was established as a local public policy, and as a result is not treated as a project with an end date. Future plans include broadening and improving local projects, providing more human resources, and the continued consolidation of this experience for its reproduction in other neighbourhoods of Montevideo. Continuing education and learning along with other cities are fundamental for improving and re-learning this pilot program model.

The city of Montevideo was nominated for the second 'UCLG International Award - Mexico City - Culture 21' (January-May 2016). The awards jury produced a final report in June 2016 and asked the UCLG Committee on Culture to promote this project as a practical example of the implementation of Agenda 21 for Culture, and as a special mention of the second edition of the Award.

This factsheet was put together by Mariana Percovich, Director of the Municipality of Montevideo Department of Culture, Montevideo, Uruguay. 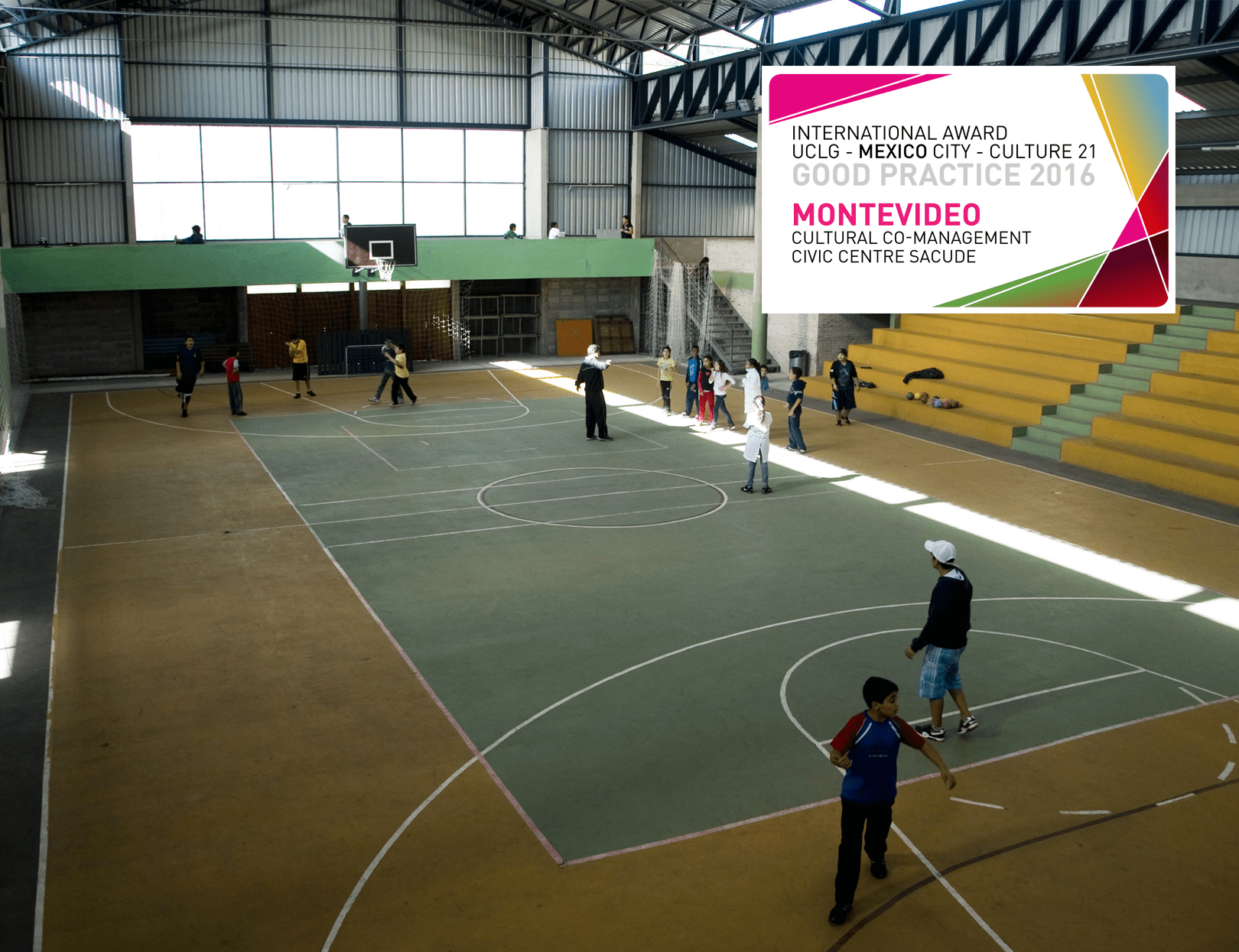