The Acadian people are descendants of Canada’s first French settlers. They arrived as a result of mass deportation between 1755 and 1763, and were spread between to New England, Louisiana, France, Quebec, and more. Today these communities in Canada are primarily rural and have an aging population. However, some of these areas have become vibrant hubs where arts and culture are managed and appreciated. Others, often smaller in size, have no real decision-making power and their financial capacity is limited.

New Brunswick Acadia faces difficult socio-economic conditions, whose low wages have led to an exodus of part of the French-speaking rural population. New Brunswick has one of the lowest literacy rates in the country. The transmission of language and the adoption of French-speaking culture by the province’s youth was becoming increasingly difficult.

The Comprehensive Strategy for the Integration of Arts and Culture into Acadian Society in New Brunswick was the result of the 2004 Acadian Society National Convention, in which 600 delegates unanimously recognized the fundamental role of the arts, culture, and heritage in the evolution and sustainable development of their society.

Launched in 2004 with the states-general, the approach brings together all sectors of civil society, as well as the various levels of government, to work to develop a comprehensive strategy. In the end, 54 recommendations were unanimously adopted in 2007 by the 1,000 people who took part in the work.

The states-genera; have led to a consensus on a cultural program and a new definition for Acadian identity, which is based on language and territory, but also on commitment to a collective project on inclusion and openness.

Implemented by the Acadian Association of Professional Artists of New Brunswick (AAAPNB), the Strategy views culture as a pillar of sustainable development. It has drawn a road map that guides Acadian society in its efforts to incorporate arts, culture, and heritage to contribute to the region’s full development. To this end, it mobilizes and engages all stakeholders in all sectors, political bodies, and government partners.

The aim is to place arts, culture, and heritage at the heart of development to strengthen the cultural of citizens, improve the socio-economic status of artists, and promote the importance of cultural diversity.

Putting arts, culture, and heritage at the heart of Acadia’s sustainable development in order to strengthen the cultural identity of its citizens, engage local governments and territories in concrete ways to take charge of their development, improve the socio-economic status of professional artists, and promote appreciation of cultural diversity.

The AAAPNB was mandated to implement the Strategy after it was launched in 2009. There are 52 municipalities, 30 of which are actively involved, 6 provincial departments, a federal department, and about 100 agencies involved in the Strategy’s implementation, including:

With respect to education:

At the municipal level:

With respect to the status of artists and the cultural sector

Support the structuring of local actions

The support and training project was created as a result of a few municipalities specifically including arts, culture, and heritage in their strategic planning. It did not take into account the role of this sector in the development of other municipal sectors. In recent years, the AAAPNB has carried out this project with 11 Acadian communities and has supported elected officials, municipal administrators, and cultural stakeholders in drafting plans. With the help of qualified resources, the AAAPNB has developed training workshops and a mentoring service for municipalities. The AAAPNB has also partnered with the Arts and the City network to provide municipalities with cultural clinics (collaborative work days) to analyze how culture can be a solution to social, economic, cultural, and environmental issues.

Balance sheets as well as the quantitative and qualitative evaluation of actions have helped the region establish priorities, redevelop sector strategies based on experience, and update their action plans. This showed the tremendous impact that the Strategy has had on New Brunswick’s society.

The key factors that made the process successful are:

Since the 2004 Acadian National Convention, the states general in 2007, the launch of the Comprehensive Strategy in 2009, and 18>23 Trajectory, the renewal of the Comprehensive Strategy in 2018, the AAAPNB and its partners, have all continued to work to make culture an essential tool for development. With a new road map, they will continue to implement the program to benefit the overall development of the Acadian people.

Acadia was a candidate for the fourth UCLG Mexico City – Culture 21 International Award (November 2019-May 2020). The jury for the award drew up its final report in June of 2020, and requested that the UCLG Committee on Culture promote this project as one of the good practices implemented under Agenda 21 for culture. 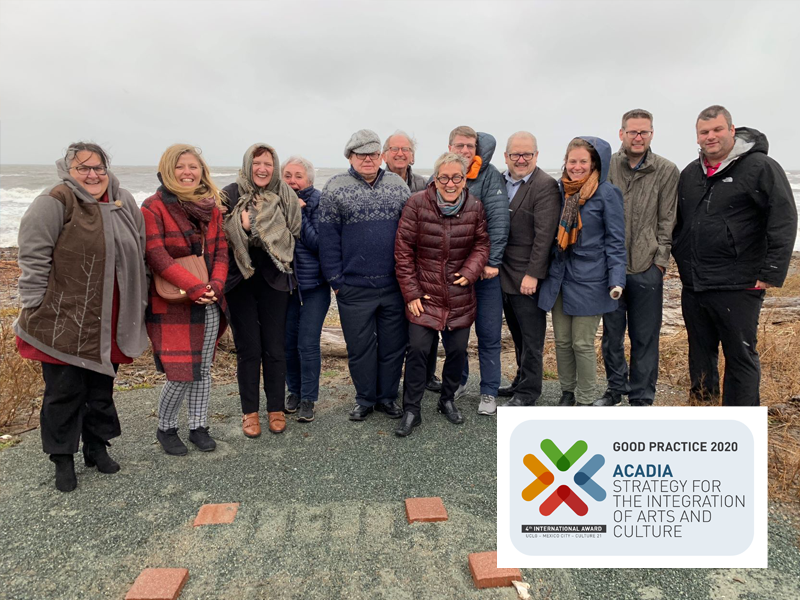