Liverpool lost half of its economy and population in the latter half of the 20th Century. However, it successfully drew upon its enormous capacity for resilience and reinvention to deal with harsh economic change. The city chose to use culture (in its broadest sense) to galvanise its recovery. The city has consistently used culture and heritage as a core part of its strategy for renewal for over 30 years, from Unesco World Heritage Site designation in 2004, to European Capital of Culture in 2008 and Unesco City of Music in 2016. Liverpool recently signed an historic Devolution Agreement with the UK Government and is the only city to have included culture as a headline part of its strategy and ambition.

After a successful European Capital of Culture (ECOC), the city considered it as a simply first step to re-imagine the city. Liverpool’s academic evaluation of the impacts of 2008 demonstrated the range of benefits that arise from sustained cultural investment: substantial economic impacts, improvements to the city’s profile and image, increased civic pride, and education and environmental agendas arise from mass engagement and cultural participation. Therefore, is designed an annual programme of events and activities that would sustain mass citizen participation, attract visitors and accrue economic. A place which attracts people to live, invest, study, visit and play.

THE GOAL IS TO ENGAGE RESIDENTS IN CULTURE, INCREASE ECONOMIC IMPACT AND PROMOTE LIVERPOOL ON AN INTERNATIONAL STAGE.

Cultural polices and investment decisions are ultimately decided by elected Mayor and his Cabinet. It involves widespread consultation with citizens and cultural stakeholders. Proposals are presented to the Mayor’s Cabinet for a decision and these reports and decisions are made publicly available. Artistic decisions are made independently from the political process by the policy of appointing independent event and festival curators, who exercise complete artistic control.

Throughout 2014-18, a series of consultation, research and development exercises will produce a series of thematic strategies in order to have a ‘full deck’ of complementary and cohesive strategies in play by 2018, enabling to establish a Master Plan for Liverpool Culture for 2018-25. The approach to date has been highly successful but the weakness is that it has focused upon the city’s administrative area, which covers 0.5 million people, rather than the wider metropolitan city region of 1.5 million people. The city is the cultural hub of this wider area and plans are being developed to form a new partnership that will deliver cultural services at the metropolitan level.

On the other hand, the Transformational Events programme delivers many of Agenda21 for Culture’s principles and recommendations. Highlights the importance of culture as a factor in sustainability and wealth creation is fully realised. Understands that access to the cultural and symbolic universe at all stages of life is fundamental in the shaping of coexistence and construction of citizenship. Not only are a variety of age groups involved in the cultural goods but the Transformational Events programme has built a dialogue and appreciation between these different age. The major events have ensured that cultural knowledge is within reach of all citizens through educational resources and digital technology. By listening or watching the spectacle and social media the events can get to a wider public.

The goal of the transformational events is to engage residents in culture, increase economic impact and promote Liverpool on an international stage

The artistic and operational processes are long and fairly complicated involving engagement with stakeholders on both operational and logistical levels. From the agreement of the idea to the delivery involves many phases including funding, commercial sponsorship, liaison with statutory authorities and engagement with artists, cultural organisations, schools and education providers etc. all of which can take anytime between three months and three years to deliver. During the planning phase of events, which occurs years in advance, includes the engagement with emergency services (fire, police ambulance), transport providers and landowners to ensure the necessary logistics are in place. Previous events are examined, lessons learned and changes are made in response.

MAJOR EVENTS ENGAGE ALL RESIDENTS AND TARGET COMMUNITIES IN ALL ASPECTS OF DELIVERY, FROM CREATING THE STORY TO PARTICIPATING IN THE EVENT ITSELF.

Liverpool’s Transformational Events collaborate with partners and stakeholders on many levels. Culture Liverpool work closely with third sector and charity organisations throughout all development phases of the events. Young people are engaged as the projects are tied into the school curriculum and the subject matter is developed to stimulate subjects as diverse as maths and literacy. The art organisations, schools, cultural venues, retailers and hoteliers are also part of the activity.

The major events engage all residents and targeted communities in all aspects of delivery, from creating the story to participating in the event itself. Especially young people and deprived communities have been put at the heart of the events. 9,000 young people participated in workshops, performances and an elite masterclass programme in 2015. By also making events free to the public, Liverpool City Council has ensured that access to cultural goods is maximised for all of the city’s residents. This is the only city in the UK that has no price tag for culture.

Events have influenced the way in which teams within the council work together. The events team work with departments such as education, social services, adult day care centres, children’s and youth services, libraries and park services to address their agendas and key messages. Large scale city wide events are used as a platform to engage the public and deliver multiple outcomes for different departmental agendas. Staff expertise and contacts gained from attracting sponsors and commercial income for the major events now supports other activities and events across Council departments.

Liverpool’s cultural community has benefitted greatly from the legacy of ECOC and its transformational events. Each event offers funded and non-funded arts and community organisations in the city an opportunity to engage in the projects as part of the main event or the complementary engagement programme.

BY MAKING EVENTS FREE TO THE PUBLIC, LIVERPOOL HAS ENSURED THAT ACCESS TO CULTURAL GOODS IS MAXIMISED FOR ALL OF THE CITY’S RESIDENTS.

The events provide a significant and positive economic impact on the metropolitan area. The activities acted as a catalyst for participatory programmes across the city and enhanced community

identity, cohesion, supported educational engagement, promoted wellbeing and generated a significant increase in involvement with, comprehension of, and respect towards historical events.

The programme is a good initiative because Liverpool is the fourth most deprived local authority area in England and has some of the most deprived communities in the UK in terms of health, income and employment deprivation.

The Transformational Events Programme is an opportunity to support community cohesion and celebrate people’s differences and help our communities to understand and respect each other’s backgrounds.

THE ACTIVITIES ACTED AS A CATALYST FOR PARTICIPATORY PROGRAMMES ACROSS THE CITY AND ENHANCED COMMUNITY IDENTITY, COHESION AND WELLBEING.

Liverpool has made great progress in its regeneration but the process is not yet complete. The staging of events in areas still requiring regeneration gives residents a sense that their area matters and will improve. Ensures the continuity by making the planning continuous and simultaneously managing the previous year’s artists, this year’s applicants and next year’s stars of the future, alongside on-going activities.

The city of Liverpool was a nominated candidate for the second 'UCLG International Award – Mexico City – Culture 21' (January – May 2016). The awards jury produced a final report in June 2016 and asked the UCLG Committee on Culture to promote this project as a practical example for the implementation of Agenda 21 for Culture. 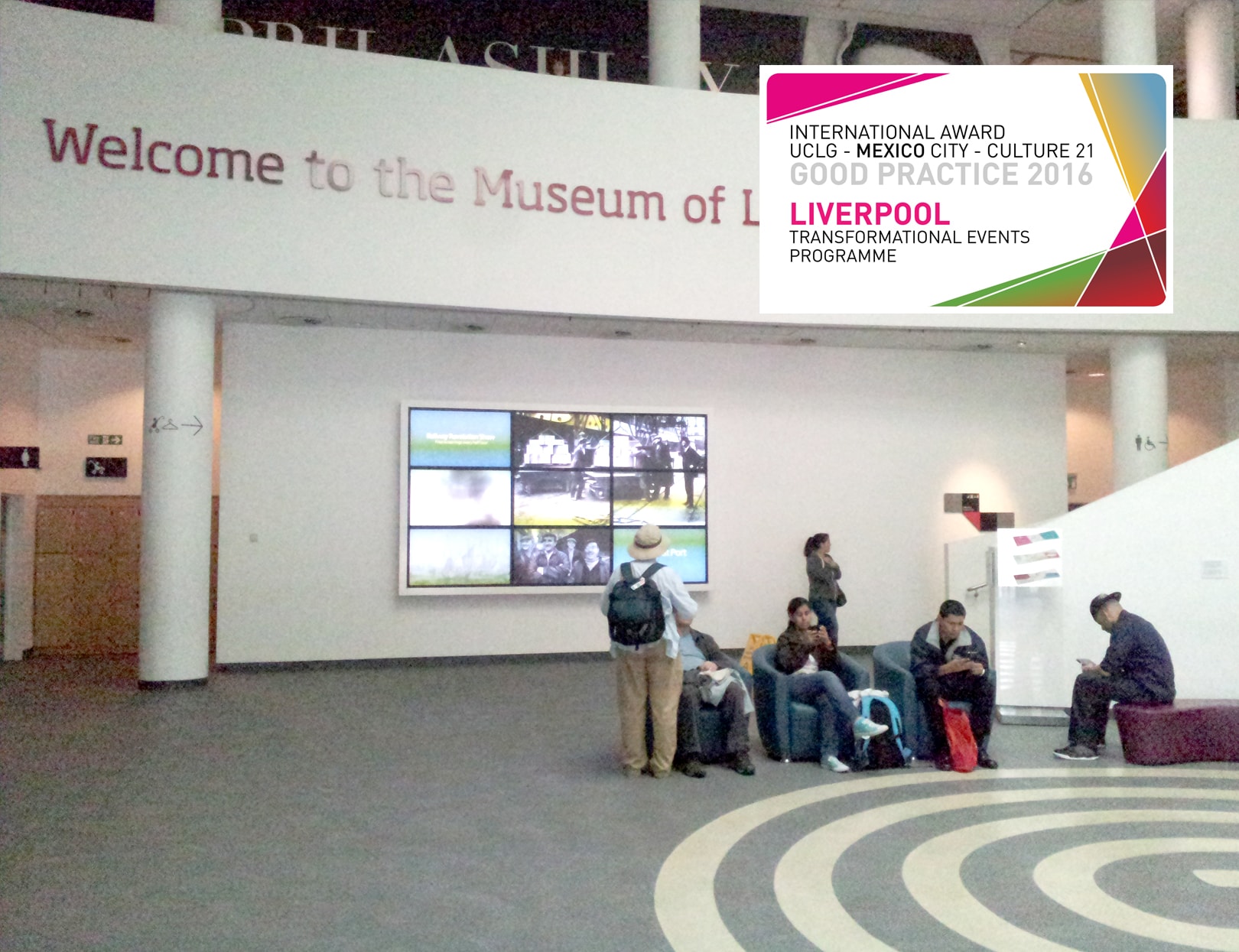