In Rio de Janeiro, vulnerable communities are part of the urban reality. These areas have been subject to various types of public policies with approaches ranging from rejection, demolition and relocation of the population to housing projects up to its recognition as precarious neighborhoods, subject to infrastructure improvement programs and its physical, economic, social and legal integration to official governing systems and urban development of the city as a whole. Alemão Complex of Slums is composed of 15 communities with around 70,000 residents and 20,000 houses.

In December 2008 the Pacifying Police Units (UPPs), created by the Security Secretariat of the State of Rio de Janeiro had its first unit deployed. It consists of a new model of public safety and policing, aiming to restore the legal and institutional control of the territories through community policing. Consequently, pacification enables the improvement of public policies in these areas and the integration of these to the city. In 2010, the Alemão slum complex (Complexo do Alemão), one of the biggest drug dealers’ area stronghold in the city, was taken by the police in a major action. As one of the results of this operation, the slum became part of the social program Morar Carioca, which aims to formalize the favelas in Rio de Janeiro by investing in infrastructure services, housing and urban planning.

The CineCarioca was designed as part of this program, paying special attention to the lack of social bonds and cultural spaces in the community. Complexo do Alemão is a territory where most of the young people are neither studying nor working. Given the lack of efficient connection between cultural facilities, youth and schools, CineCarioca is dedicated to entertainment, arts and critical thinking, and has the goal of cultivating creative minds and fostering the affirmation of cultures in the human, economic, political and social dimension.

Rio de Janeiro’s creative economy is a growing source of wealth. Thus, the value of the tangible and intangible heritage is seen as a potential generator of income and employment. CineCarioca project and others alike, demonstrate the city willingness to invest in culture and creativity in order to address inequalities and foster development. For instance, the current revitalization of the port area enhances the value of the patrimony and integrates social, economic and cultural perspectives. Cultural infrastructure is being improved and the implementation of new cultural facilities will make it one of the most attractive areas of the city: Rio Museum of Art (MAR) was inaugurated in 2013 and Rio’s Museum of Tomorrow is under construction.

Therefore, cultural policies formulated in Rio de Janeiro are taking into account new conditions for work, transportation, culture and leisure as factors for a more democratic urban landscape. Housing, job creation and professional training are elements of the cultural policy making. Furthermore, the support for local initiatives of cultural groups seeks to modernize the city while preserving its identity.

Rio de Janeiro City Hall believes that offering access to cultural rights is a way to address social inequalities. CineCarioca is implemented in a recently pacified favela free from the organized crime since 2010. Thus, CineCarioca provides dialogue and intercultural experience as tools for social inclusion, gathering new moviegoers and supporting cultural participation. Moreover, in order to stimulate people who cannot afford going to the movies, tickets are subsidized as an incentive. The cinema is managed by a private company, chosen through a public bid, striking a balance between public interest and market development. Thus, the project works as an instrument to both foster human development and promote peace, playing a strategic role for urban revitalization as it encourages cultural industry and job creation.

On the top of that, the project School CineCarioca (CineCarioca Escola) connects cultural facilities and schools, guarantying the access to children of all ages to go to the cinema in the mornings, enhancing personal sensitivities and helping on the promotion of coexistence and citizenship. School CineCarioca is a yearlong program for students from the neighborhood. It offers private screenings for children to explore Brazilian cinema. The program consists of morning screenings of selected films presented together with the schools. The central goal of the program is the movie-going experience, especially because 91% of CineCarioca audience had never been to the cinema before. The films are also discussed in class afterwards.

The general objective of the project CineCarioca is the territorial balance of the cultural supply across the city, improving coexistence and quality of life, increasing social inclusion and urban revitalization while strengthening the critical capacity of the citizens. CineCarioca specific goals are:

City Hall has invested US$ 1,5 million in the construction and U$ 150/year in subsidy. Management is outsourced and the company was chosen through a public bid. The main actions carried out lead to 5,000 screenings of 200 feature films, up to September 2014. The ticket price is US$ 2 vs. the city average of US$ 5. CineCarioca presents 4 screenings per day, 7 days a week. The theatre also host domestic and foreign premieres as well as film festivals and film series. Moreover, 14,000 students from public schools were able to attend the movie theatre through our after school program CineCarioca Escola. Participating in the arts provides students with cognitive, affective and aesthetic experiences which are essential to human development. Additionally, it is important to mention that the cinema employees live in the community.

In Brazil, only 9% of the population goes to the movies. Thus, the main hurdle of the implementation was to make people overcome some intrinsic beliefs they had about going to the movies, such as: “tickets are too expensive”, “I´m not a movie-goer”, “I don´t know what is screening in the cinemas” and, “there are no movie theaters near to my place”. As a result, to the moment, more than 250,000 tickets were sold at a cost of US$ 6 invested by the State in each citizen. 91% of CineCarioca audience had never been to the movies before and these new movie-goers can potentially increase market development in the near future. After the implementation of CineCarioca, City Hall undertook a wide variety of constructions in the area. Since then, small businesses are booming, pirate DVD selling has fairly diminished in the area, and ATM machines were installed.

CineCarioca invests in culture to improve coexistence and quality of life, increasing social inclusion and urban revitalization while strengthening the critical capacity of the citizens.

70,000 people live in Complexo do Alemão. The Human Development Index of this territory is 0,711, and it has been essentially lead by drug dealers and organized crime groups in the past decades. Since 2010, the police have implemented a public policy for the pacification, security and urbanization of the area. On the one hand, many people who live in Complexo do Alemão now feel more confident of going outwards. Some of the residents from the Complexo do Alemão who have never left the community, after watching films and being in touch with cultural activities, started to explore the city.

Consequently, the cinema, as an “open window to the world” has helped many residents to open their minds and, as a result, local residents started to look for better job opportunities. On the other hand, the movie theatre attracts people from the neighborhood who are now fearless of going into the community. Because of the cinema affordable price, families who live around Complexo do Alemão are developing the habit of attending screenings there. These visits create new boundaries for the slum dwellers and their city. Hence, the population has experienced social, behavioral, and economic benefits from project CineCarioca.

Rio de Janeiro City Hall learnt from the CineCarioca experience that cultural development strategies are essential tools to create the conditions for peace. The expansion of a chain of neighborhood cinemas is under development in order to promote territorial balance of the cultural supply and cultural rights in the city outskirts. The goal is to build a new CineCarioca/year in DCI standard movie theaters, in other strategic points of the city, with 2 screens each and at least one 3D theater .

The project has changed and redrawn territorial and human boundaries of the city. Many people who live in Complexo do Alemão now feel more confident of going outwards, and some of them, after watching films and being in touch with cultural activities, started to explore the city.

4.3. Impact on the territory and on the population

The success of CineCarioca has inspired municipal policies and programmes on culture, urban planning and regeneration. Community-based projects connecting arts, education and technology are being implemented in areas with high demand for cultural spaces like North and West Zones.

The transversal impacts of the projects are mainly the indirect benefits such as job creation and the diminishment of pirate DVD selling.

Bearing in mind the increase in citizens’ cultural needs, subside for CineCarioca is guaranteed for the next years. Additionally, the expansion of the CineCarioca chain is under development. In November, 2011, the second CineCarioca was inaugurated in Meier. The neighborhood movie theater was revitalized with 3 screening rooms, one of which is 3D. 150,000 tickets were sold in the first 10 months of operation. The expectation of Rio de Janeiro City Hall is to build new movie theatres in the West and North Zones.

Given the lack of efficient connection between cultural facilities, youth and schools, CineCarioca is dedicated to entertainment, arts and critical thinking, and has the goal of cultivating creative minds and fostering the affirmation of cultures in the human, economic, political and social dimension.

The City of Rio de Janeiro was a candidate to the first edition of the “International Award UCLG – Mexico City – Culture 21” (January-May 2014). The Jury of the Award elaborated its final report in June 2014 and requested that the UCLG Committee on Culture promotes this project as a good practice of the implementation of Agenda 21 for culture.

This article has been written by Sérgio Sá Leitão, Municipal Secretary of Culture. 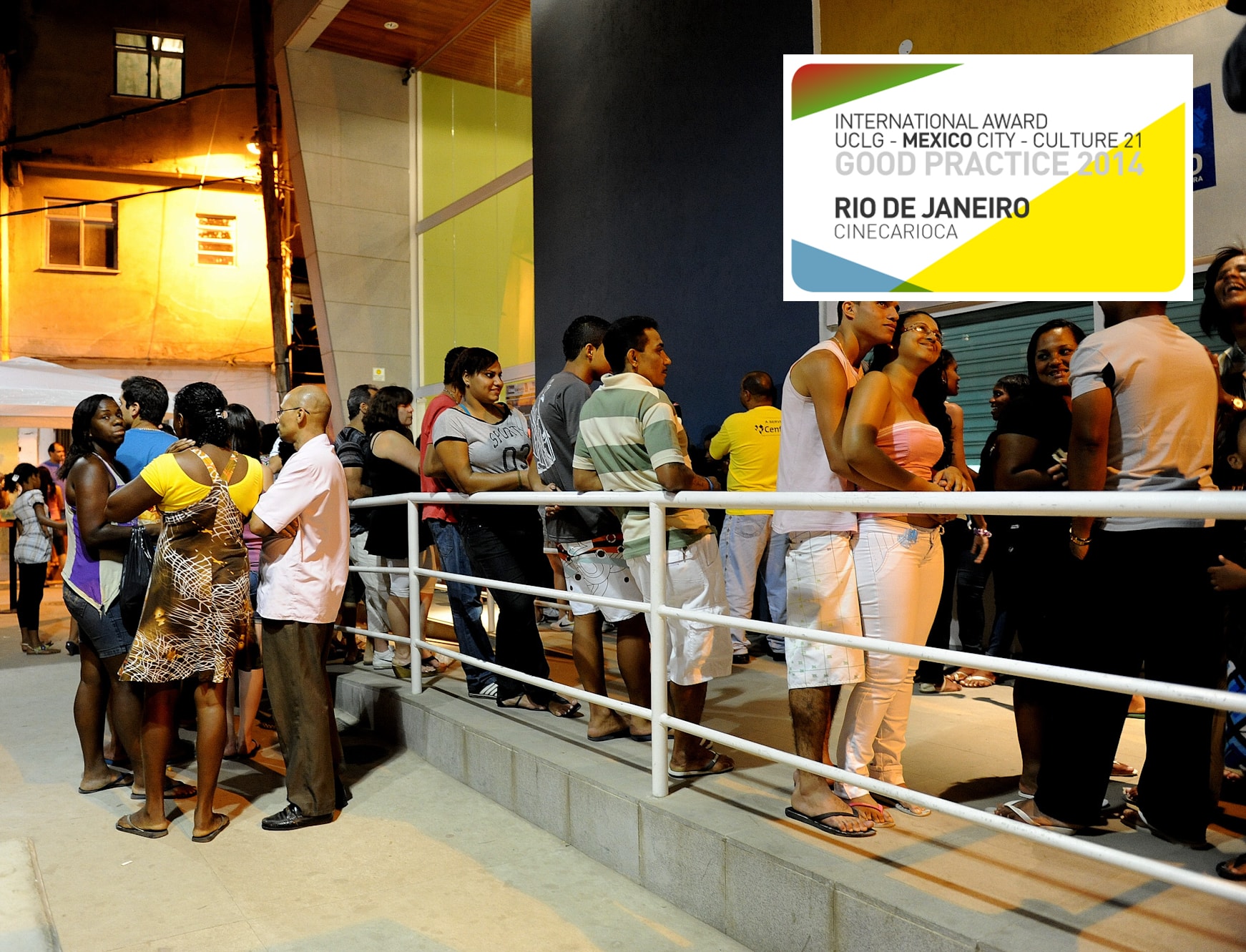