Building Hoi An towards a cultural city

Hoi An is an administrative unit of Quang Nam, a province in Central Vietnam. The City is located 30km South-east of Da Nang City. From 1999 to 2013, the population went from 77, 283 to 90.891 and the city from 5 urban wards to 9 and from 7 communes to and 4. The city is situated at the lower section of Thu Bon River, which flows into the sea at Cua Dai estuary. With such a location, Hoi An has unique natural and cultural landscape with many traditional and craft villages located along the riverside and used to be a famous and bustling international trading port in South East Asia from 16th to 19th centuries. In the beginning of the 19th century, trading activities fell into difficulties and stagnation and the local people lived on farming, fishing and making handicrafts. During the anti-American war, most of the people in Hoi An lived in very difficult conditions. In 1999, the Ancient Town of Hoi An city was inscribed in the World Cultural Heritage List. It opened a new page of the City’s history with opportunities for development. Nevertheless, the City has also been facing many new challenges, particularly the negative impacts of urbanization, the development pressures on cultural – traditional values and ecological environment.

The cultural policy was initiated by the People’s Committee of Hoi An It was determined a long-term development policy which is divided into four phases. The first resolution of the policy was carefully drafted, went through many comments and adjustments and was finally approved by the City People’s Committee. It has also been reviewed after each phase of implementation and adjusted for adaptation in the new context. The policy is now being implemented under phase 3 (2011-2015). It was issued in 1999, 14 years after the Vietnam’s Renovation, while the early market economy was bringing economic development opportunities and pressures on local culture and environment. There were loss in cultural traditions, a degradation of cultural heritages and the top priorities were made on economic growth. Many traditional craft villages have been on the verge of decline and a lot of cultural performances have been abandoned. The policy has been a success of both Hoi An authorities and residents in the follows of previous efforts in heritage preservation. This policy set out culture and heritages as a driving force of development. Preservation and promotion of cultural values had to be done with economic development and ecological environment protection for higher level of participation, satisfaction and cherish of the local people.

THE IMPLEMENTATION OF THE PROJECT HELPS TO IMPROVE LOCAL PEOPLE’S AWARENESS OF CHERISHING, PRESERVING AND PROTECTING THE CULTURAL HERITAGE; DEMOCRACY IS WIDE OPEN FOR THE PEOPLE TO PARTICIPATE IN BUILDING THEIR GOVERNMENT, AND ECONOMIC LIFE.

The policy has been implemented in all fields from economic and cultural activities to social security. It was promulgated in a context of both abundant advantages and opportunities and challenges. Hoi An had also been renowned for its history in international trading port. The waterways and traditional, craft villages are rich properties for the City in developing economy, particularly eco-cultural tourism. Almost all build heritages (ancient houses and relics) were protected over hundreds of years. In addition, the City’s government received strong support from local residents. Opportunities also included active support and presence of the donators and international organizations It included both financial and technical expertise. The challenges that Hoi An had to face were not a few. The City had to face heavy pressures, particularly the need of urbanization. Being the unique City with an ancient town at its heart, Hoi An had no similar model or previous experience found in Vietnam. The policy was experimental and the implementation needed prudence.

2. Hoi An and culture

Prior to the policy “Building Hoi An towards a Cultural City”, there were a lot of efforts in safeguarding the architectural monuments, relics and cultural values:

“Building Hoi An towards a Cultural City” aims at the Goal: develop Hoi An into Cultural, Ecological and Tourism city where eco-socio development well harmonizes with heritage preservation and promotion, making the City into a unique cultural city of Vietnam.

The Policy “Building Hoi An towards a cultural City” reflected Agenda 21 for culture:

BEING THE UNIQUE CITY WITH THE ANCIENT TOWN AT ITS HEART, HOI AN HAD NO SIMILAR MODEL OR PREVIOUS EXPERIENCE FOUND IN VIETNAM.

The policy implementation was divided into 4 phases from 1999 to 2015. By the end of each phase, an assessment is conducted to draw lessons and propose recommendations and adjustments for the following phase. With the active participation of many stakeholders, including government agencies, domestic and international organizations, individuals and local residents, many programs and activities have been conducted. Among those, 12 significant projects and activities which have been fulfilled deserve a mention:

All the aims of the project have been achieved so far. The material and spiritual life of the people have been improved considerably. The cultural heritage of Hoi An city becomes a great motive for the local economic, cultural and social developments. GDP from tourism, tourist and cultural services occupy 65 – 68% of the yearly GDP of the city. Poor families go down to 0.2%, primary and secondary education popularization has been completed, the average living age goes up to 72 – 74, the Ancient Town of Hoi An was recognized as a World Cultural Heritage, in 1999 and a World bio-sphere Reserve in 2009. Recently, Hoi An has been recognized to be an eco-environmental and rural balanced city. Villages in the vicinity are preserved, urbanization has been controlled. The movements “Say No to plastic bags, “Say No to Smoking”, “Cycling for Environment Protection”, “Earth Hour” launched in 2011, 2012 have been being kept. The city gets 70% from the total income of sightseeing ticket sales to restore relics and invest for cultural development of the city. Intangible cultural properties have been effectively invested and promoted such as the Hoi An Legendary Night, the monthly festivities, the traditional craft villages of the Thanh Ha (pottery), Tra Que (organic vegetables), and traditional occupations of making Cao Lau Noodle, collecting Bird Nests.

The implementation of the project helps to improve local people’s awareness of cherishing, preserving and protecting the cultural heritage; democracy is wide open for the people to participate in building their government, and economic life. Administrative formalities reform has been improved, more convenient and more responsible. Between 2005 and 2014, Hoi An have received 14 different recognitions awards.

The project benefitted to local people living both in the rural and urban parts of the city. The local cultural values are preserved and promoted more and more effectively. These cultural values become the motive for tourism economy, bringing higher incomes for many people in the heritage site. Together with the preservation of the cultural heritage, the cultural values of traditional craft villages and those of the rural parts are also protected, preserved and promoted, paving the way for the cultural and ecological tourist activities development, bringing new jobs for people from Tra Que, Thanh Ha, and Cam Thanh villages, and for the Cham islands.

Hoi An ecological environment has been well protected and taken care of, being able to cope with urbanization and enable a good life and good health for the people of the whole city. Carrying out this project, step by step, brings about the reform of administrative formalities in the orientation of widening democracy, offering conveniences for the people to get quick accesses and effects of their righteous needs and to positively participate in building the city government.

“BUILDING HOI AN TOWARDS A CULTURAL CITY” AIMS AT THE GOAL: DEVELOP HOI AN INTO CULTURAL, ECOLOGICAL AND TOURISM CITY WHERE ECO-SOCIO DEVELOPMENT WELL HARMONIZES WITH HERITAGE PRESERVATION AND PROMOTION, MAKING THE CITY INTO A UNIQUE CULTURAL CITY OF VIETNAM.

The project has made positive changes to the management and monitoring of the local government. Tourism and Services development became the key economy of the city and Culture and Ecology play as the base of the economic development. New policies are given for building a green government, increasing investment for tangible and intangible heritage preservation and promotion, making conditions for the local people to create and enjoy culture.

Carrying out the project has made clear and positive changes in the local cultural life. Traditional, cultural values are enhanced and cherished. Cultural models are built and multiplied, making the city a harmonious cultural environment. New cultural values are created and popularized. The staff working in the cultural field have better improvement in standards, conception, creative and perceptive ability that help much in building policies and implementing the project contents.

The project mobilizes many groups of people, many units, agencies, occupational, religious organizations to participate. Hoi An is the good and typical example of a cultural, safe and friendly destination of the country.

Its phases succeed one after another and were never interrupted. The government continually focuses on giving policies, making financial investments for the continuity of the project implementation.

The project has its spreading elements in different fields, from culture to economy, society, and environment. It has a positive effect not only within the city but also in the neighbouring areas, even in the province and the country as well. The city develops tourism and services effectively, creating jobs, increasing income, improving living standards for the people. The localities around Hoi An also take part in the chain of tourist services. The ecological environment paves the way for protecting landscapes and ecological environment. The project also brings jobs to women, disables, easy injured ones, making equality between men and women.

The City of Hoi An was a candidate to the first edition of the “International Award UCLG – Mexico City – Culture 21” (January-May 2014). The Jury of the Award elaborated its final report in June 2014 and requested that the UCLG Committee on Culture promotes this project as a good practice of the implementation of Agenda 21 for culture.

This article has been written by Mr. Tran Van Nhan, Deputy chief of the Secretariat of Hoi An’s committee office. 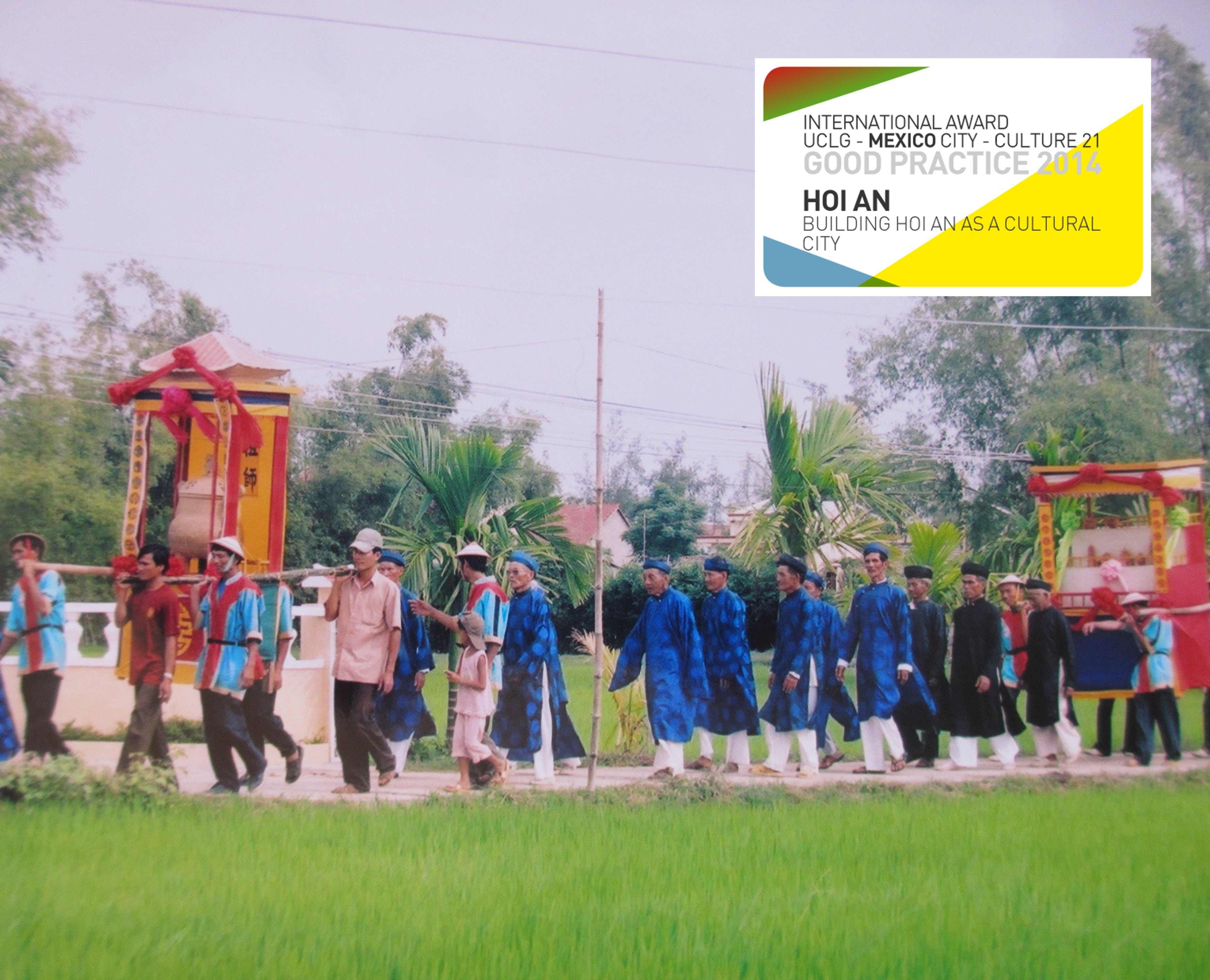