Pavlograd is a small industrial town located in the eastern part of Ukraine, and the centre of Western Donbas mining industry, with coal mining and metal industries as its core economic activities. With more than 106 000 inhabitants, 30 000 of which are young people, and more than 30 nationalities, the city has a great potential for development.

Starting from 2014, a big demographic shift was caused by the arrival of Internally Displaced Populations (IDP) from the Donetsk and Lukhansk regions and from Crimea. Within a few years, the city, located only 100km away from the conflict zone in Eastern Ukraine, welcomed 7 000 IDP families, often highly traumatised, and supported them concerning healthcare, schools, jobs, etc. For this middle-size city, this was, proportionately, a much greater influx than the so-called “refugee crisis” in the European Union, when, in 2014-2016, about 2 million asylum seekers spread across the Union (out of a total population of 508 million).

For Pavlograd, it is thus extremely important to create the best conditions – physical, economic, social and cultural – to make the city community more welcoming to the newly arrived population.

Pavlograd local cultural policy aims to support and develop local cultural diversity, while ensuring that natives and migrant populations alike are able to preserve their ethnic identity, culture, rituals, languages and religion, and to share their beliefs, values and traditions.

The city has developed a series of strategic documents, which acknowledge culture as one of the pillars of sustainable development, as well as an opportunity for community engagement and intercultural dialogue. In this sense, the “Program for Cultural Development and Cultural Heritage Preservation of Pavlograd for 2015-2020” aims to assure freedom of creative thinking and exchange, enable amateur experiments, and support local cultural stakeholders working for the sustainable development of the community and promoting local cultural values. Other documents include Pavlograd Development Strategy, “Pavlograd Program of Cultural Development”, and Pavlograd Intercultural Strategy.

The “Small Theatre – Great Place for Inspiration” initiative is closely linked to the city development strategy, which aims to:

The main goal of this project is to put the cultural legacy of Pavlograd at the service and benefit of all its residents, addressing effectively the community’s most urgent needs, economic but also social and cultural, while ensuring at the same time its preservation in accordance to global agendas on culture and sustainable development.

Its more specific objective is to create, within the city, a public space dedicated to community engagement, intercultural dialogue, exchanges, cultural education, creation and free expression of innovative cultural forms, opened to all community members regardless their age, gender, origins or religion.

To achieve these goals, the project also aims to create an adapted environment, by renovating the theatre main hall, exhibition hall, and creating comfortable studios, classrooms and meeting rooms, equipped with modern technologies.

The "Small Theatre - Great place for inspiration" initiative proved crucial for the city to achieve its strategic cultural ambitions, as this small space with a big 'heart' was filled with great ideas, aspirations and ambitious plans for the future.

In small-size cities, the cultural atmosphere has an enormous influence on the residents’ way of life. This unique atmosphere is created “on-spot”, by dedicated individuals – residents, activists or city officials. Indeed, artistic expression is an effective way to engage local residents in their community and federate them around common goals. This is all the truer in the case of Pavlograd, which has a large share of immigrant population.

With this in mind, and aiming to link Pavlograd cultural heritage preservation with the most urgent needs of the local community, the city has launched the "Small Theatre – Great Place for Inspiration" initiative.

Pavlograd Drama Theatre is a historical building built in 1869, which had to cease its activities and needed to be restored. Meanwhile, the expanding population of Pavlograd necessitated a sizeable place for holding meetings, IDPs information sessions, master classes, or social gatherings such as folk dance groups and movie evenings. Thereby, the city residents agreed through a participative process to renovate the historical building into an open-for-all theatre-centre to host social and educational activities for all. This renovation was initiated by the City Council in collaboration with different NGOs and civil society organizations.

Given that the community center was set in an old theatre building, special attention was given to the organisation of master-classes for actor skills development, stage art, stage speech, history and theory of art. A set up of a small expo-hall at the entrance of the building also hosts exhibitions of local artists and peinters from other communities.

At the time of writing, the project is in phase 5. UAH 1 129 390 of funding have already been provided by the city, divided between UAH 1 009 390 for reconstruction and some major works in the theatre, and UAH 120 000 for the restoration design project.

UAH 300 000 from the city budget are also earmarked for the year 2018 for the interior renovation of the building.

The project offered an opportunity for greater integration, interaction, intercultural dialogue and exchanges within the communities, along the principles of cultural diversity and inclusion. A few artistic projects wew born as a result of such interaction, many of them led by IDPS.

Throughout this project, Pavlograd government officially made culture an integral part of the city’s strategic development goals, targeting the local community as a whole, regardless of age, gender or origins.

National and international culture actors benefit from the Small Theatre project as they got first the opportunity to lecture and exhibit their art in the building premises, and later on in the exhibition hall.

The main beneficiaries of the project encompass the entire Pavlograd community: youth, elderly, IDPs, miners, city guests and visitors, culture and theatre actors, artists, painters, musicians, as well as residents of the neighbouring municipalities and from the entire Western Donbas region.

The project also raised awareness about the role of culture in sustainable development for urban communities and society as a whole.

Many IDPs stated that the cultural activities organised in the framework of the project had helped them to forget the very fresh traumas and/or ease the heavy feelings caused by war and family loss. In a sense, culture has been acting for them as a kind of social therapy. In addition, some IDPs launched their own creative initiatives (in photography, psychology or initiatives for kids) following the meetings and interactions that took place in the Small Theatre.

The Intercultural Cities (ICC) Index is an instrument that measures the level of achievement of intercultural policy implementation of a city, its progress over time, and which enables comparison with other cities.

According to the ICC’s 10 applicable dimensions, this initiative was assessed as having a strong impact on intercultural competences and education. As a part of the city’s intercultural strategy, the project also adds value from the perspectives of urban intercultural space creation and social services provision.

Upon the project completion, the city is planning to conduct a comprehensive independent evaluation of this initiative, for which, if received, some Award funds would be dedicated.

The ICC is based on a number of indicators that help identify where a city stands in relation to intercultural integration, which efforts should be made in the future, and which practices could help a city progress further in terms of intercultural policy.

Key success factors include the fact that a diverse group and great number of IDP families benefited from the project, which provided the opportunity for many newcomers to access the necessary information and to engage into community social and cultural activities.

Another factor was the opportunity provided by the necessary restoration of Pavlograd patrimony, giving it a chance to start a "new life".

Finally, the appetite of Pavlograd residents for learning different cultural values, meeting people from different ethnic background, breaking existing boundaries or stereotypes, overcoming the difficulties of everyday life and fighting the feeling of “alert” or “fear” (especially in the case of IDPs), had a positive social impact on this project.

The local government has secured partnership with a number of partner organizations and community activists above-mentioned, to bring financial and human support for the continuity of the project. In addition, Pavlograd City Council is responsible for financially supporting the Theatre employees, and currently also provides funds for security and maintenance of the building.

As the project continues, the cultural heritage building (the theatre) is thereby becoming a focal point for discussions, place where new ideas are born and new initiatives are jointly accomplished.

Pavlograd was a candidate for the third "UCLG Mexico City – Culture 21 International Award" (November 2017 – May 2018). The jury for the award drew up its final report in June of 2016, and requested that the Committee on Culture promote this project as one of the good practices to be implemented through Agenda 21 for culture. 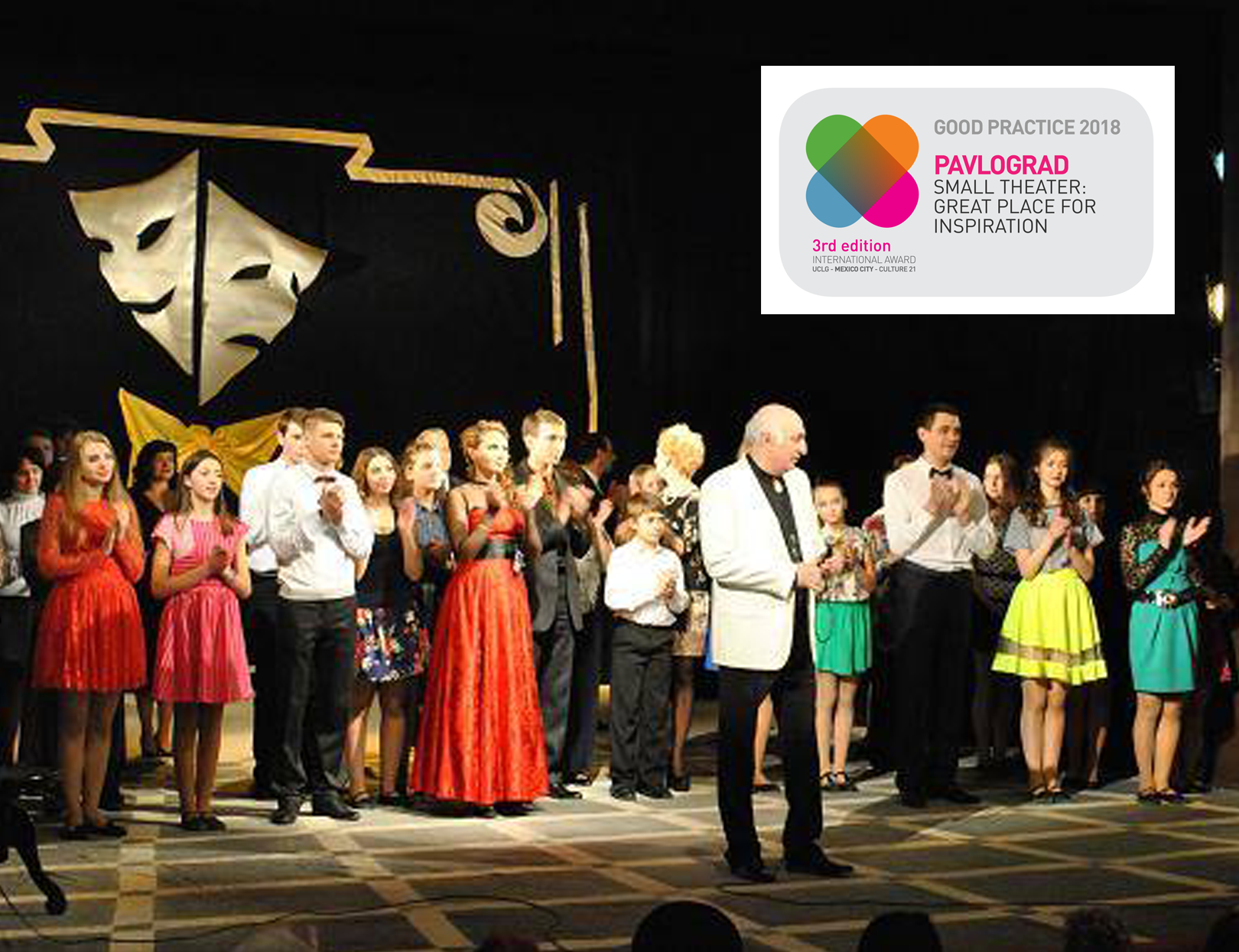