The old Montmagny quarter: a history of renaissance

Montmagny is located just 45 minutes outside of Quebec, and is home to 11,300 inhabitants. It is bordered on the north by the Saint Lawrence River, and on the south by the Appalachians. Only 7.5% of its territory is urbanized, while 48% is cultivated, and the remaining 44.5% is forest. It is the main town of the RCM of its same name, and therefore an important regional hub for neighbouring municipalities. With nearly 200 years of industrial tradition, Montmagny is known for printing, agriculture, agri-food, and the wood and metal sectors. With over 50% of its workers employed in the manufacturing sector, the closure of the Whirpool plant in 2004 severely impacted the local economy, plunging the city into a situation that forced citizens to question their future and face this social turbulence.

Almost 15 years ago, the centre of Montmagny was suffering economic difficulty following closure of the Whirlpool factory, which left 600 people unemployed and created a negative climate.

Since the mid-19th century, the town of Montmagny has been a cultural pioneer, and in 1993 it became one of the first municipalities in Quebec to adopt a municipal cultural policy. Its cultural development policy is structured around the following guiding principles:

In 2004, in the face of a challenging economic climate and the loss of hundreds of local jobs, culture emerged as an essential element for mobilization and pride in the service of the community. With the reformulation of its 1993 cultural policy in 2006, the town reaffirmed its leadership role in making culture a driver of economic and social development, as well as an identifying factor contributing to the sense of belonging in the community.

Over the years, Montmagny has relied on citizen participation for the implementation of cultural projects. It has developed a cultural directory of the town's artists, artisans, workers, and cultural organizations. A Cultural Advisory Committee was formed, made up of representatives in the cultural field, municipal employees, and elected officials, whose priorities are dictated by public consultations. Gradually, the cultural sphere was taken into account in many other areas including business, education, youth, immigration, politics, and urban planning.

Culture has thus been the basis for citizen remobilization and the revitalization of the city center, which involved cultural and recreational activities, emphasizing the value of heritage, landscaping green spaces, and public infrastructure projects.

The aim of this project was to restore the city's vitality and pride by revitalizing the city center. It also aims to improve the quality of life of citizens and strengthen their sense of belonging.

In 2004, when the city of Montmagny was hit by the closure of its largest employer, the municipal, regional, and provincial governments, community and cultural organizations, economic stakeholders, and citizens all mobilised to breathe new life into the downtown core.

The revitalization of the downtown area began with the introduction of financial incentives for businesses. Then in 2006, during a citizen consultation conducted as part of the renewal of the cultural policy, the city's pedestrian walkways, parks and green spaces, as well as culture and recreation were all identified as elements that have the greatest impact on citizens' quality of life. It was through these decisions that the Old Montmagny Quarter was reorganised.

The closure of the Whirlpool factory paradoxically served as catalyst for the true rejuvenation of the old Montmagny quarter. This helped re-establish the area's vitality by stimulating commercial and cultural activity, and encouraging citizen participation.

Montmagny developed an inventory on the built heritage in the town centre in order to outline an architectural integration programme and aide in the restoration of commercial facades. Furthermore, the town adapted heritage interpretation tools to youth, seniors, and tourists, while simultaneously setting up a programme for integrating works of art into public spaces. The urban layout has been updated to promote pedestrian traffic, with themed paths and urban parks designed to accommodate citizen events.

When the opportunity arose to relocate the town hall in 2008, the transformation of the Old Montmagny Quarter into a major citizen hub gained new momentum.

This began with the "Church Plaza" project in 2010. This involved building a public market with local suppliers, converting the heritage clergy house into a municipal library, and relocating a monument in order to make the space more accessible and redesign the entrance to the town center. The total cost of the project was $104,000, and received financial support from the Montmagny RCM through the Rural Pact ($40,000) and the CLD (local development centre) of the RCM ($10,000). In the same neighbourhood the town built a private seniors' residence, and a "3 bridge" walking trail, a 2 kilometre pedestrian loop along the river that runs through the town from one side to the other.

One significant part of this project was the conversion of the clergy house into a library. This was originally submitted for public consultation because of the large investment required ($4 million, with a $1.18 million grant from the Ministry of Culture and Communications). By integrating the library into the St. Thomas clergy house, this project reaffirmed the public appeal to safeguard this heritage building. After 2 years, 45% of the population had joined the project and 80 volunteers had participated. Open 37 hours a week, the library has become a place of social, cultural, and professional integration. Private companies and international clubs (Lions, Optimists, and Richelieu) are also involved and provide financial support. A Mobile Library is intended for seniors in residence, an Arts and Language camp is geared towards youth (6-12 years), and the Générations Branchées (Connecting Generations) programme introduces seniors to computer science by pairing them with teenagers.

In June 2017, the project was expanded with a new public square connecting both the city and the park with enough space to accommodate major events that can even extend to the surrounding pedestrian streets. At a cost of $ 1.38M, the construction also included water fountains, plenty of seating, and a large stage. In 2017, more than 20 shows, youth day camps, and local and regional gatherings including the Global Accordion Forum, attracted tens of thousands of visitors every year.

At the same time the town allocated an annual budget of $700,000 to culture, with its low-income residents enjoying access to the "Accès-Loisirs Quebec" (Quebec Access to Leisure) programme. Alongside these, the revitalization project has also included high-quality social and adapted housing.

As part of this project, Montmagny has dedicated significant human and financial resources to the cultural sector. More and more, the town is approached by reputable organizations wishing to organise events in the centre, or simply to find inspiration in the Montmagny approach. By bringing together development stakeholders and local organizations in a concerted effort, there has been a tremendous blossoming of the potential of the cultural sector. This has subsequently influenced and expanded the municipal administration's approach.

With this project, renowned cultural organizations are contributing to the town's influence well beyond the region. Volunteer involvement has also been well established in the community. The creation of a revitalization committee in the downtown area has encouraged citizen initiatives, which in turn have grown in number.

Beyond the physical transformation of the city centre, the actions undertaken have had a remarkable social impact. The city centre is once again a place for integration and gathering, while Montmagny has regained its status as a cultural and tourist hub.

The region now thrives with new energy, attracting new residents and tourists. The new community spaces are part of residents' daily lives, urban parks encourage gatherings, and the variety of cultural activities stimulates foot traffic in the shops. Cultural businesses are also established in the city centre including the cinema, theatre, artisan shops, and creative spaces.

The inhabitants are at the heart of the evaluation process through citizen consultations that guide the priorities for action of various town committees. These involve social network consultations, online surveys, and more. In particular, they collaborate with the downtown committee, which plans, monitors, and evaluates the impact of downtown revitalization projects with the support of the Montmagny Economic Development Society (SDEM), boasting an annual budget of $80,000. The SDEM also provides support to merchants by offering them training on technology, customer service, and more, further contributing to the economic strength of the downtown area.

The many awards received by this project, such as the 2016 excellence award from the Quebec Network of Healthy Cities and Towns, the Cecobois Excellence Award, the 2015 Architecture Award for Quebec Libraries, and many more, are testaments to the success of the ideas and results of this initiative.

Important elements include: the concerted effort of the municipal administration and local development stakeholders; the ability to promote the identity of the town through its intangible heritage while also emphasizing the architectural and historical value of Old Montmagny; the emphasis on the inhabitants by adding a human perspective to public spaces to restore neighbourhood life.

In 2019, the conversion of the former town hall into a venue for cultural organizations (International Music School, Hallélou Choir), and the redevelopment of the large park into a space for recreation and commemoration, will mark the culmination of this project, one that has restored the heart and soul to Old Montmagny, and given pride back to its citizens.

The City of Montmagny was a candidate for the third "UCLG Mexico City – Culture 21 International Award" (November 2017 - May 2018). The jury for the award drew up its final report in June of 2016, and requested that the UCLG Committee on Culture highlight this project as a good practice in the implementation of Agenda 21 for culture, as a special mention for the third awarding of the Prize.

This article was written by Patrick Morency, Coodinator for Cultural and Heritage Activities, Montmagny, Quebec, Canada. 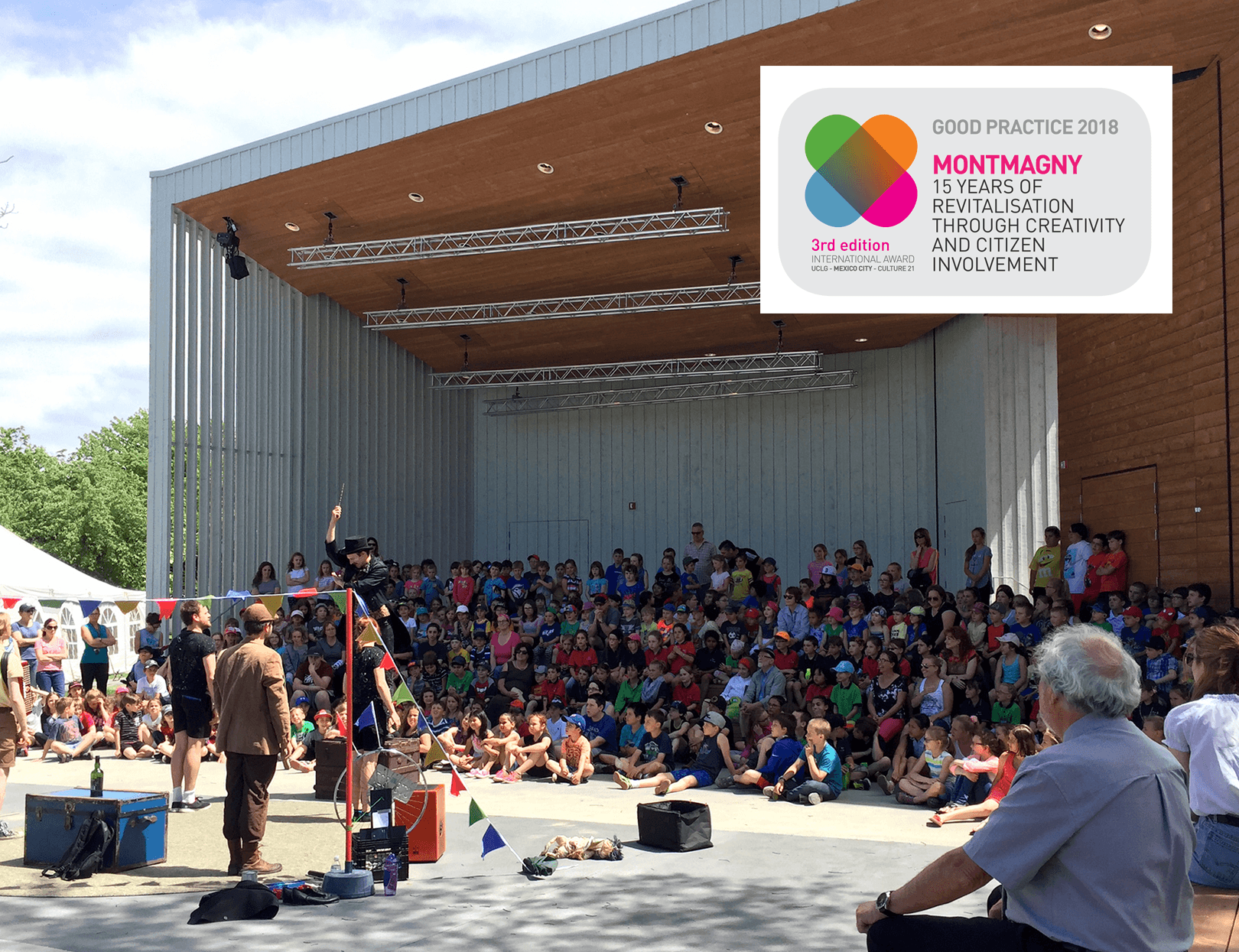