Founded in 1634, Trois-Rivières is the second-oldest French-speaking city in Canada, and the ninth-largest city in Quebec. As the seat of the region, it is also home to provincial branch offices. With 137,000 inhabitants, it is also the main cultural hub of the Mauricie region, bringing together leading cultural institutions: universities, colleges, conservatories, symphony orchestras, theatres, amphitheatres, museums, art galleries, art centres, exhibitions, and heritage sites.

While its prosperity has long rested on the manufacturing and paper industry, the town plunged into crisis in the 1990s. However, today, the city showcases a strong, dynamic cultural life due to a high concentration of cultural institutions, festivals, events, and renowned national and international artists. As a result, the city earned the title of Cultural Capital of Canada in 2009.

In the 1990s, the Canadian paper industry, which formed the basis for most of the local economy, underwent significant changes, leading to the closure of factories and many job losses.  Faced with this, the city sought new development goals, and choose to make culture a major driver of transformation and economic development.

Up until now, the city's cultural activity has been focused on managing cultural sites that it owned such as theatres, the cultural centre, and the municipal library, but which cultural organisations had to manage with own means. As a result, the city decided to adopt a cultural policy.

From the beginning of the 1990s, Trois-Rivières became one of the first cities in Québec to adopt a cultural policy, thereby helping arts and culture to occupy an increasingly important place in the composition of the social, economic, and community fabric of the fabric of the city.

Over the years, culture has transformed the face and identity of the city by incorporating various aspects of local development. Culture has been firmly established in various city policies: family policy (2004), integration policy for persons with disabilities (2005), the social development policy (2005), the public art policy (2006), Age-Friendly Cities (2012), and tourism development strategies developed by the tourism organisation (IDÉ). More recently, stakeholders have also participated in the sustainable development policy review committee (2018).

The cultural policy of Trois-Rivières aims to make culture a driver of sustainable development, as well as a key part of tourism, social development, and strengthening the sense of belonging and pride among citizens.

Through three social, economic, and cultural components, it strives towards these specific objectives:

Revitalisation of the City Centre

Updating the city centre was crucial in placing culture at the heart of daily life for the people of Trois-Rivières. Indeed, it gave new life to the city. It resulted in renewed financial support for cultural organisations, support for many cultural events, the renovation and improvement of cultural infrastructure, summer street entertainment, and a new brand image "Très Trois-Rivières" ("Very Trois-Rivières"), which refers to the many possible ways to describe the city. Furthermore, a "City Centre Action" committee was created to facilitate regular consultations with economic, commercial, events, cultural, and land planning stakeholders.

The cultural policy of Trois-Rivières is structured around three main elements: the social, the economic and the cultural components are all integrated into several  projects.

From Cultural Exclusion to Cultural Mediation

Since 2003, a programme to combat cultural exclusion has been in place. The aim is to improve access to arts and culture for citizens excluded from social and cultural life, particularly those in working class areas. The initiative has made access to culture a fundamental right with the use of cultural mediation.

Several actions have been implemented to this end: a Culture Club that facilitates access to cultural goods; artist residencies in schools, community organisations, and seniors' centres (for example, the collaboration between artists and street youth to create a public piano project); support for projects led by community organisations (books, exhibitions); tours and artist meetings for newcomers. In 2015, the broader ideas of this policy were reviewed for a renewed dialogue with the community.

Between 2002 and 2017, the City's financial support for cultural organisations increased eightfold.

Trois-Rivières Upon the Saint Lawrence

Trois-Rivières Upon the St. Lawrence is another flagship project under the city's cultural policy that involved of the renovation of the former Canadian International Paper (CIP) mill, which is now closed but was formerly the largest in the world. By appropriating this immense plot of land, the city has made it an attractive and unique place to live.  Set on the shores of the St. Lawrence and Saint-Maurice Rivers, this is now open to the public. The development also includes the former Boréalis paper mill and a new amphitheatre.

In 2010, the former water filtration plant, a historical heritage site, was converted into a Boréalis museum, allowing the people of Trois-Rivières to reconnect with their industrial past and pay tribute to the city's old lumberjacks, loggers, and workers. In 2015 construction began for the Cogeco Amphitheatre on land that had been inaccessible for nearly 100 years. This signalled a new phase in the diversification of the city's summer cultural events. This unique venue offers a new place for meeting and recreation, as well as an exclusive partnership with Cirque du Soleil for events.

In 2015, a new Department for "Culture, Recreation, and Community Life" was created to ensure greater cohesion and transversality across municipal departments and any non-profit organisations connected with them (Trois-Rivières Culture and the Trois-Rivières Events Corporation).

The city currently authorises and recognises about 70 cultural and artistic organisations throughout its territory. It increased its financial support from $295,060 in 2002 to $2,269,380 in 2017: theatre companies, symphony orchestra, choirs, dance companies, film clubs, historical places, museums, etc.

The cultural policy has made it possible to transform the city centre and the old CIP mill to make it an expansive public space under the Trois-Rivières Upon the Saint Lawrence initiative. Additionally, more than 2,000 cultural events are held each year for all citizens including seniors, young children, elementary and secondary schools, those from inner city areas, and more. The amphitheatre and Boréalis alone attract more than 200,000 visitors, while the 36 shows hosted during the Cogeco Amphitheatre season attracted a total of 48% of its spectators from the Mauricie region and 52% from outside. The economic and tourism benefits have allowed Trois-Rivières to diversify its economy.

Through the consultation and evaluation process, a new definition of cultural mediation has emerged in which guidelines have been redefined and an action plan is being prepared.

The city intends to maintain its various agreements with its partners, as well as maintain its cultural infrastructure, with a future plan to renovate the main venue. Trois-Rivières is working to update its support programmes for cultural organisations, and is planning to revise its cultural policy in the near future. The aim is to further promote citizen participation while preserving the progress made in the dissemination of culture and the development of cultural tourism.

Finally, the city is planning to carry out a major overhaul of its cultural policy so it can better address the principles and objectives of Agenda 21 for culture, particularly with respect to cultural rights and citizen participation.  A cultural assessment of the city will take place to measure the progress made over the last 20 years and to spark a new dialogue between various cultural stakeholders and citizens.

The City of Trois-Rivières was a candidate for the third annual "UCLG Mexico City – Culture 21 International Award" (November 2017 - May 2018). The jury for the award drew up its final report in June of 2016, and requested that the UCLG Committee on Culture highlight this project as a good practice in the implementation of Agenda 21 for culture, and as a special mention for the third awarding of the Prize. 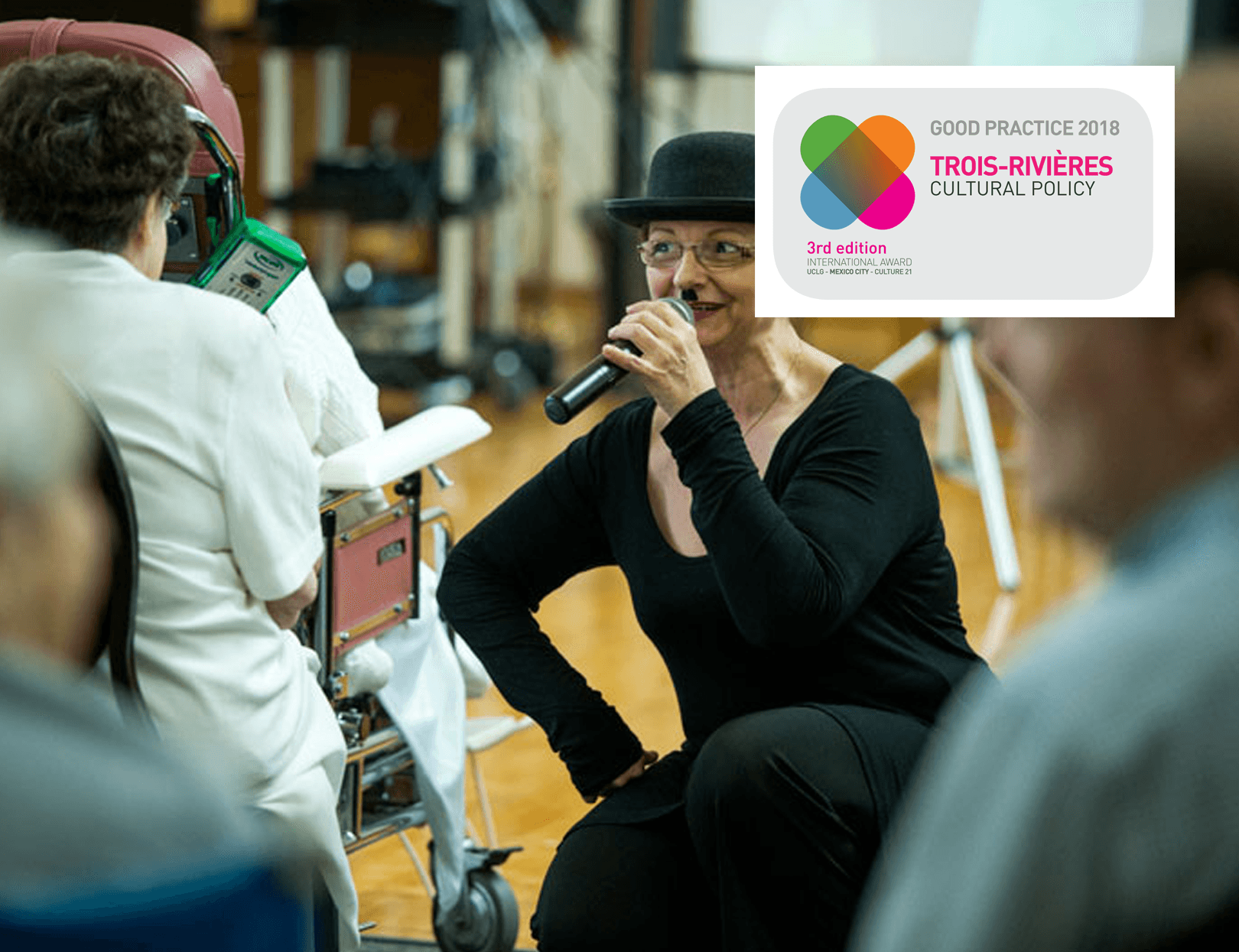